Some notes on the bust of Sir Joshua Reynolds
by Ceracchi.

Some notes and photographs regarding the plaster cast manufacturers Robt. Shout and Peter Sarti.

I have so far discovered two versions of this bust - one in the collection of my great friend and fellow enthusiast Peter Hone and another at the National Trust house Sudbury Hall, Derbyshire.

Peter Hone has owned this bust for many years see the photographs below.

The two busts have obviously come from the same original? source but the socles are completely different. The socle and support on the Sudbury are very similar to that used very frequently by Joseph Nollekens based on an antique precedent.

The Sudbury bust is from one of a group of 5 similar busts at Sudbury Hall (see photographs below). 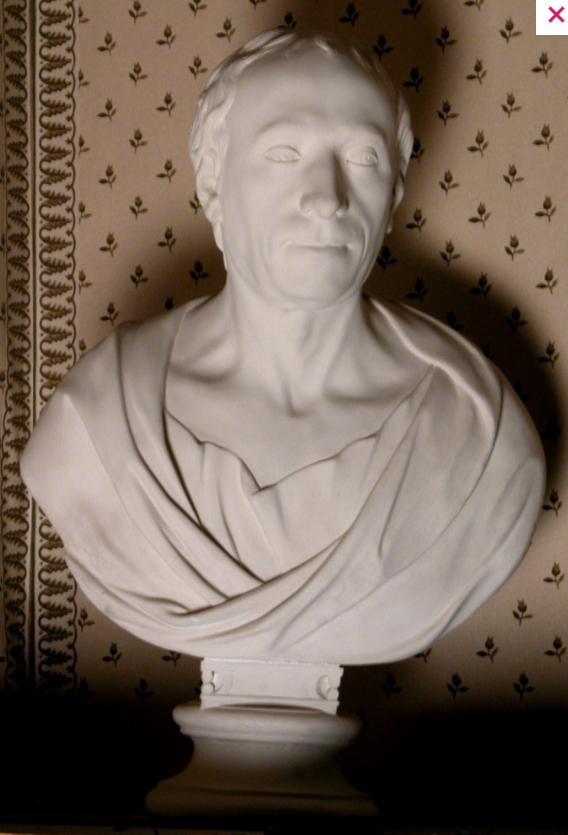 Some rather poor low resolution photographs from the National Trust website.

NB turned socle and Nollekens type support which appears on the busts depicted below - all at Sudbury, Derbyshire. 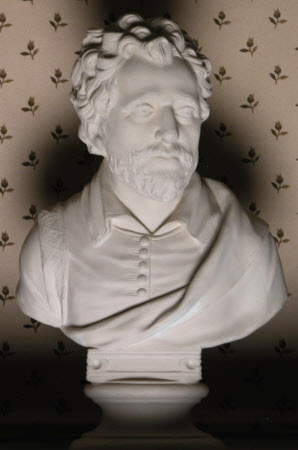 Edmund Spenser
described on the National Trust website as by (Robert) Shout.
I presume this means that it is inscribed on the back. Given that all five busts share the same detail of the socle and support it follows that it would be safe to assume that these five busts all came from the same manufacturer Robert Shout. 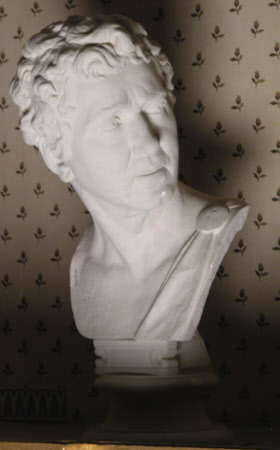 This must have been cast from Ceracchi’s bust of Reynolds in terracotta, dated 1778, which had been presented to the Royal Academy in 1810.

The terracotta bust had been sold in auction by Greenwood in 1792.
A marble was in the possession of
There is a version by P Sarti at the Atheneum London (see below) -
They say Sarti made new moulds of the bust, but was not allowed to keep them for his own use. "The tunic and cloak were added to the portrait by Sarti, to make the format similar to the others"?
Ceracchi’s terracotta was apparently destroyed (The Age of Neo-Classicism, Council of Europe Exhibition Catalogue, London 1972, no. 335).

The Royal Academy now possesses an undated marble version of the bust, signed Cirachi sculpsit Roma, which was presented by Lord Taunton in 1851. On the cast in the Octagon at the Burlington House (built 1868), the pinned cloak is different from the marble, which suggests that it too had been made from the lost terracotta. 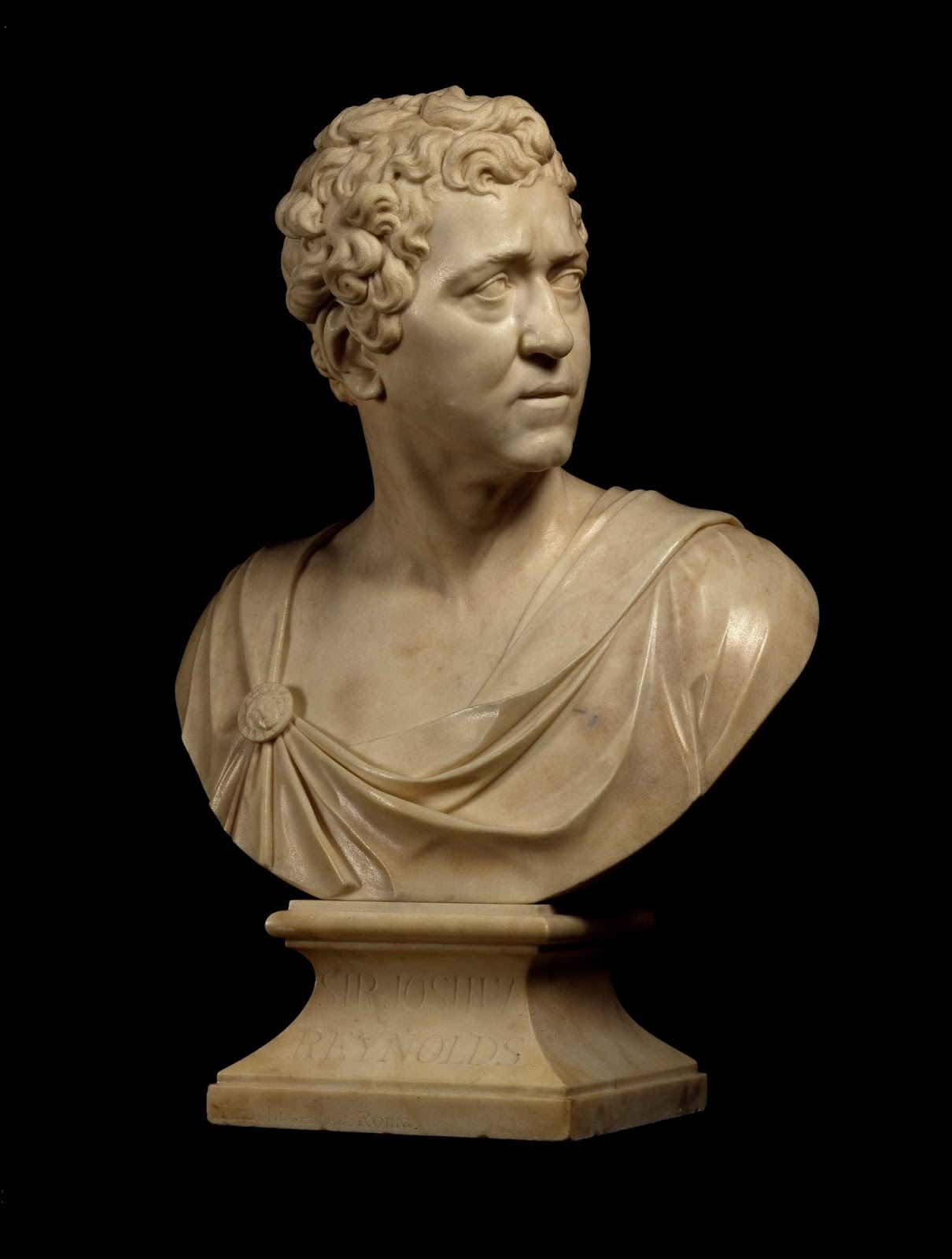 Bust of Sir Joshua Reynolds
by Giuseppe Ceracchi (1751 -1801).
c.1778 - 9.
Royal Academy
Much of this information from - http://www.victorianweb.org/sculpture/athenaeum/catalogue.html
Notes to the busts by the estimable John Kenworthy Brown.
Illustrated on this website are busts of Edmund Burke, David Garrick, William Harvey, Dr Samuel Johnson John Locke, Milton William Murray (Lord Mansfield). Isaac Newton, Sir Walter Scott, and William Shakespeare - all with the same support to the bust but with no socles. 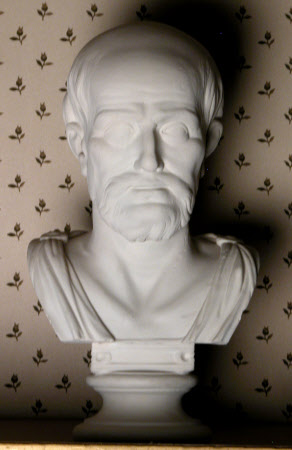 Described on the National Trust website as Classical Man 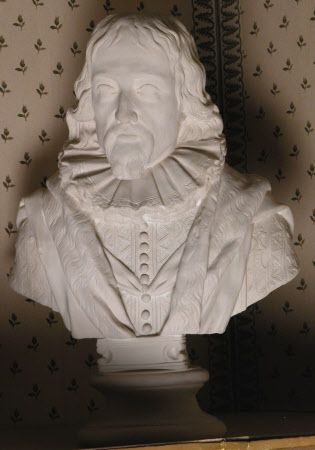 Francis Bacon
After the bust by John Cheere.

There is a version of this bust in bronzes Plaster at York Museums originally supplied to Kirkleatham Hall (see below) by John Cheere in 1749. 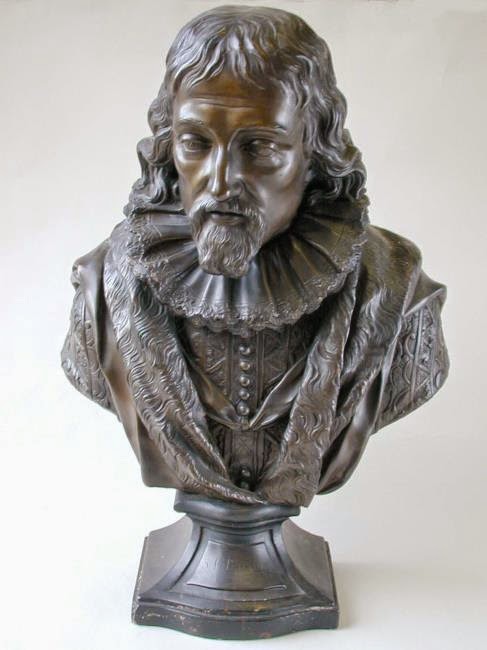 A few notes on Benjamin and Robert Shout.

Benjamin and Robert Shout described as Masons and Statuaries are noted as occupying a property behind 13 Eagle Street, Red Lyon Square 31 March 1792 in the records of the Sun Fire Insurance Company (London Metropolitan Archives - 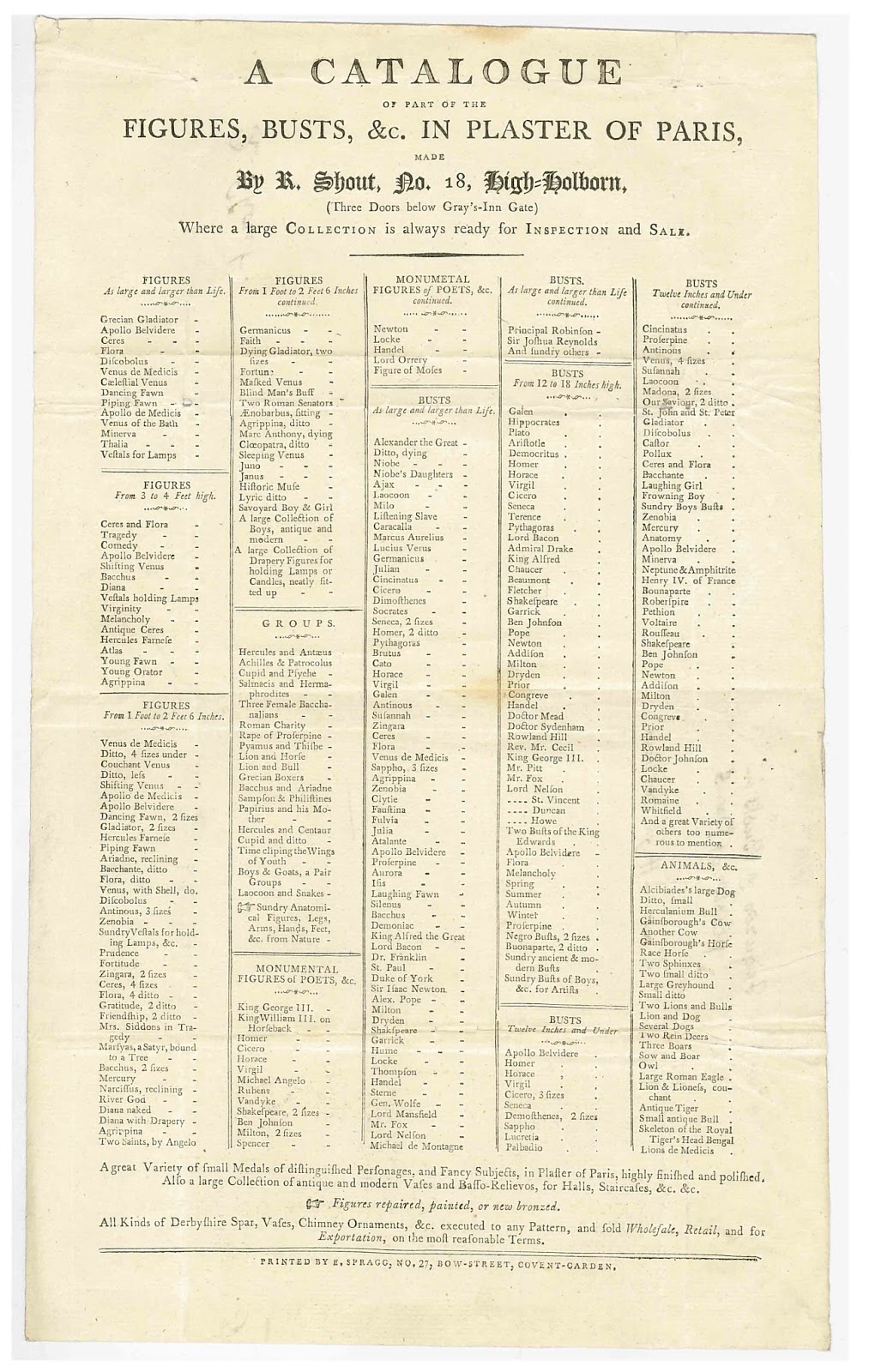 Copy of the list of products available  from Robert Shout

Trade Card for Benjamin and Robert Shout
Printed sometime prior to the death of Ben. Shout in 1811.

Both cards above from the British Museum Collection.

After the death of Nollekens his assistant Alexander Goblet sold 42 moulds for busts including Jonson and Mansfield to the Plaster Cast manufacturer James Deville (1777 - 1846).

It would appear that Sarti obtained the moulds for some of his busts at some time from the Deville Studio.

The fashion for library busts lasted over two centuries. The busts of various literary, scientific and political characters had a long life. It appears that some of these busts originally cast by John Cheere in the 1740's were then produced by Messrs Harris and Parker in the Strand in the later 18th century. The moulds or masters were then passed to Messrs Shout of Holborn before ending up with Mr Sarti. 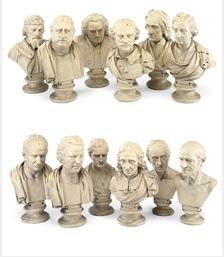 Group of busts sold at Christie's New York.
sold lot 161, 7 May 2008.
from the Gladstone Collection at Fasque.
Described as A SET OF TWELVE ENGLISH PAINTED PLASTER BUSTS CAST BY B. & R. SHOUT, FIRST QUARTER 19TH CENTURY.
King Alfred after Rysbrack, John Milton, after original cast by Cheere), William Pitt, Charles James Fox, William Shakespeare ( Poss cast from an original by John Cheere - another at the Wren Library Trinity College Cambridge), Alexander Pope (after Roubiliac Milton/Fitzwilliam), John Dryden, Alfred the Great, Edmund Burke, Sir Isaac Newton (after Cheere), John Locke (after Cheere), Samuel Johnson, Milton and Voltaire; each on circular socle topped by a name tablet.
variously marked 'made by R. Shout/Holborn' and variously dated '1800[?]' and '1820'
The highest 24 in. (61 cm.) (12)
NB the turned socles and details of the supports
NB also the bust of Pope - this is either a version of the Milton / Fitzwilliam bust of Pope or the later copy by Nollekens. This certainly lends credence to the fact that the Sudbury and Hone busts illustrated above are not poorly sculpted variants of the Roubiliac Pope busts.
______________________________________ 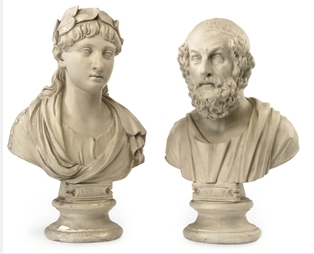 Another pair of busts by Shout
Sold Christies New York lot 162, 7 May 2008.
Described in the 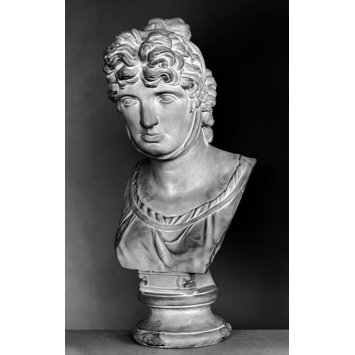 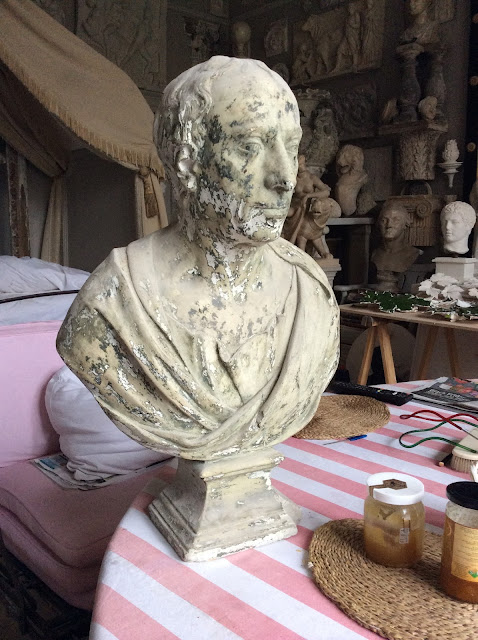 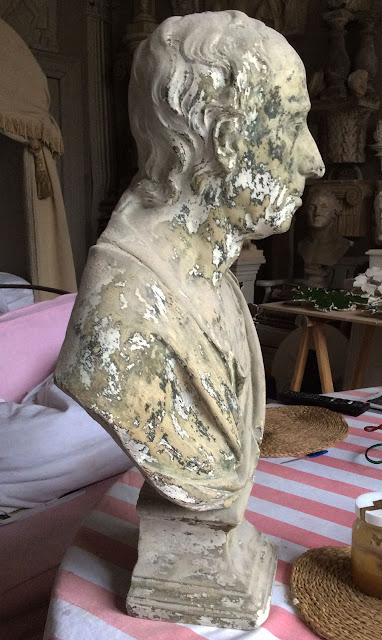 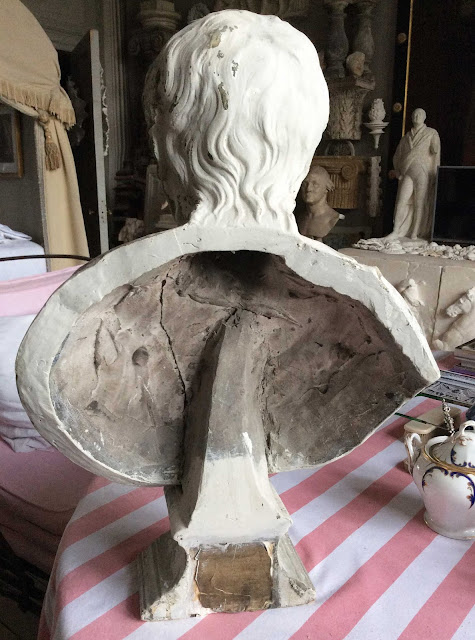 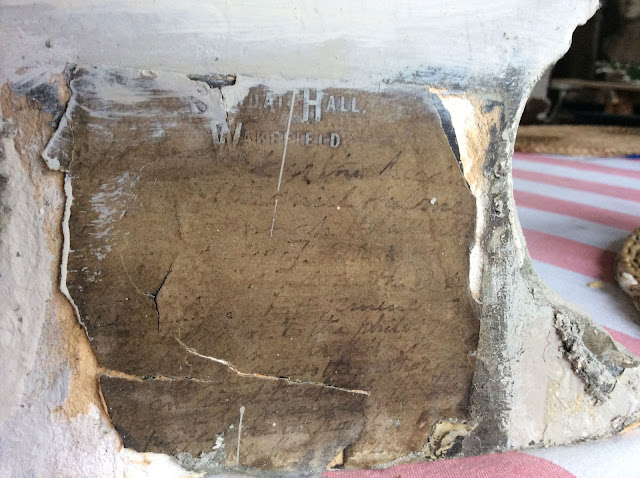 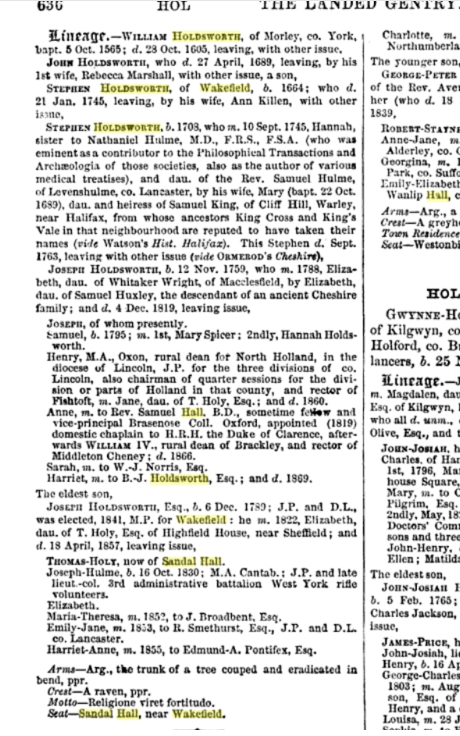 This suggests to me that the bust above is taken from another bust from Roubiliac's Studio - Roubiliac sometimes reused the drapery of busts he had created on other busts - the Marble bust of Plato in the Library at Trinity College Dublin by Roubiliac uses this same drapery. See my Trinity College Blog entry. - 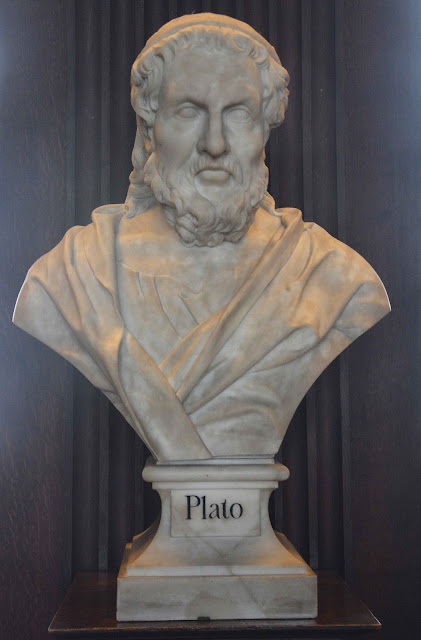 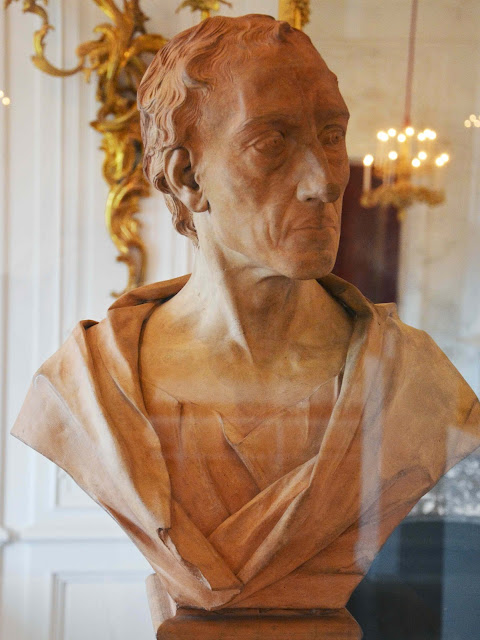 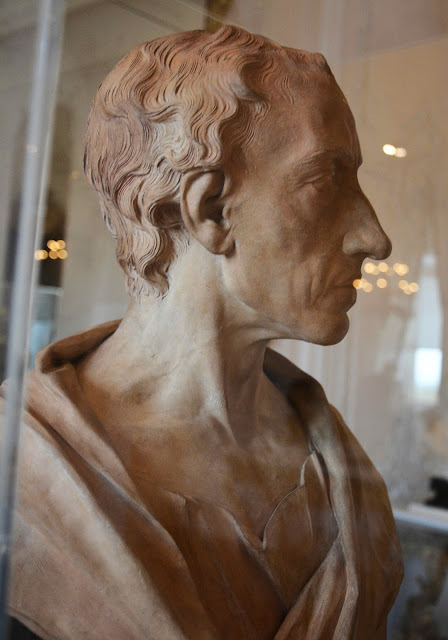 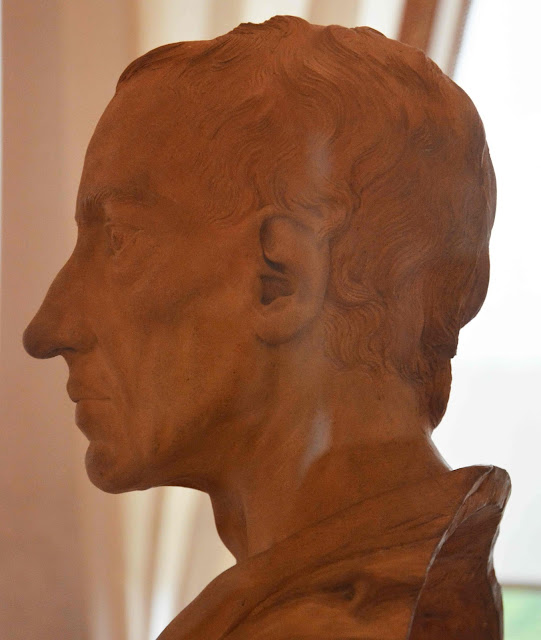 The Terracotta Bust of Alexander Pope by Roubiliac now in the Barber Institute. Birmingham. 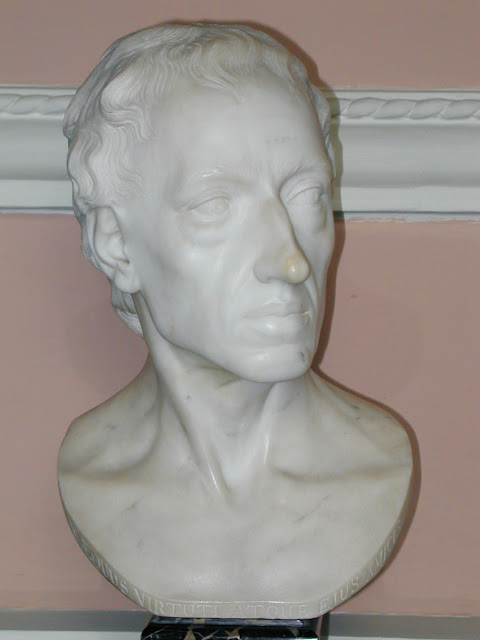 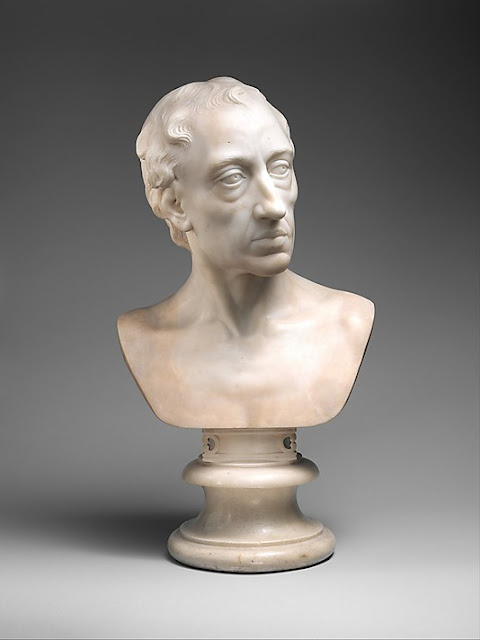 The Metropolitan Museum of the Nollekens bust of Pope.

A few Notes on Sarti and the Athenaeum Club Busts.

Bill from Sarti to the Athenaeum early 1830

All the Articles in this Bill
are correct. C Daly £42. 2. 6
Certified to be correct
Decimus Burton
24 April 1830
[Endorsed:] 1830
Casts Ordered for payment
Sarti Building Committee
26 April
Received 30 April of the Trustees of the
Athenæum the sum of Forty two pounds two
shillings and sixpence being the amount of
my Bill for Casts supplied to the New
Building to this time – £42. 2. 6 P. Sarti
____________________________
Further busts by Sarti using the shout type socle and support
In the Collection of the National Trust, Wimpole Hall, Cambridgeshire.

The National Trust owns full-size plaster busts of Locke (white plaster), Milton and Dryden (both ‘bronzed’), and Pope (‘bronzed’, but a different model from that at the Wren Library). All four have the impressed signature ‘P. Sarti, Dean Street, Soho’. They may originally have been at Wimpole, but are more likely to have been acquired as a job lot after 1936 by Captain George and Elsie Bambridge, who owned and refurnished the house. 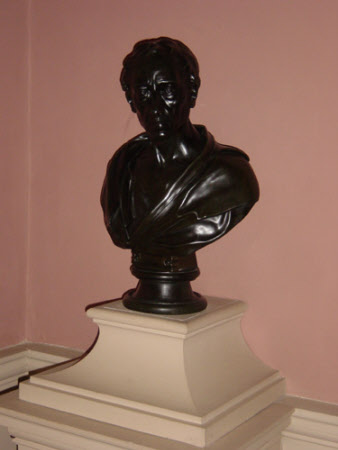 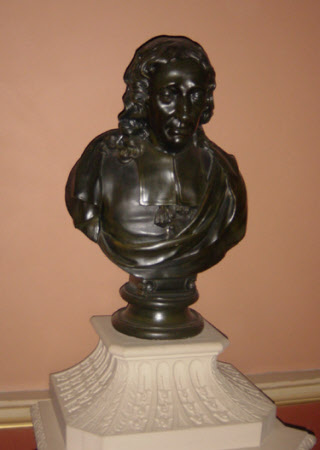 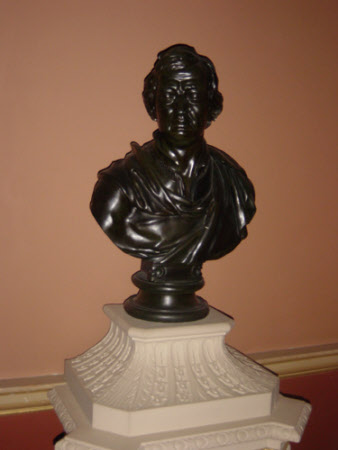 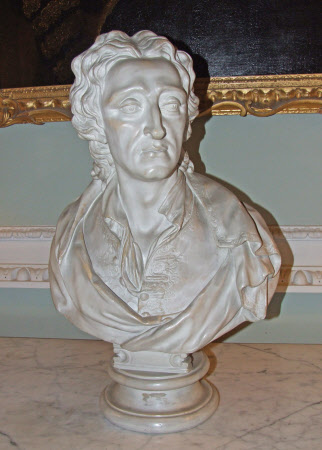 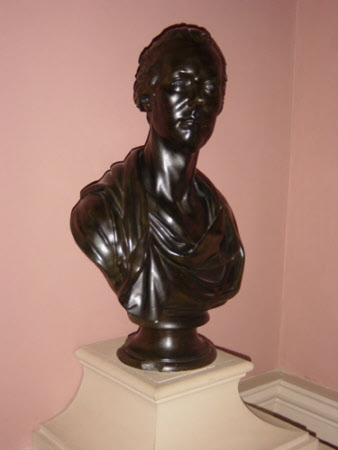 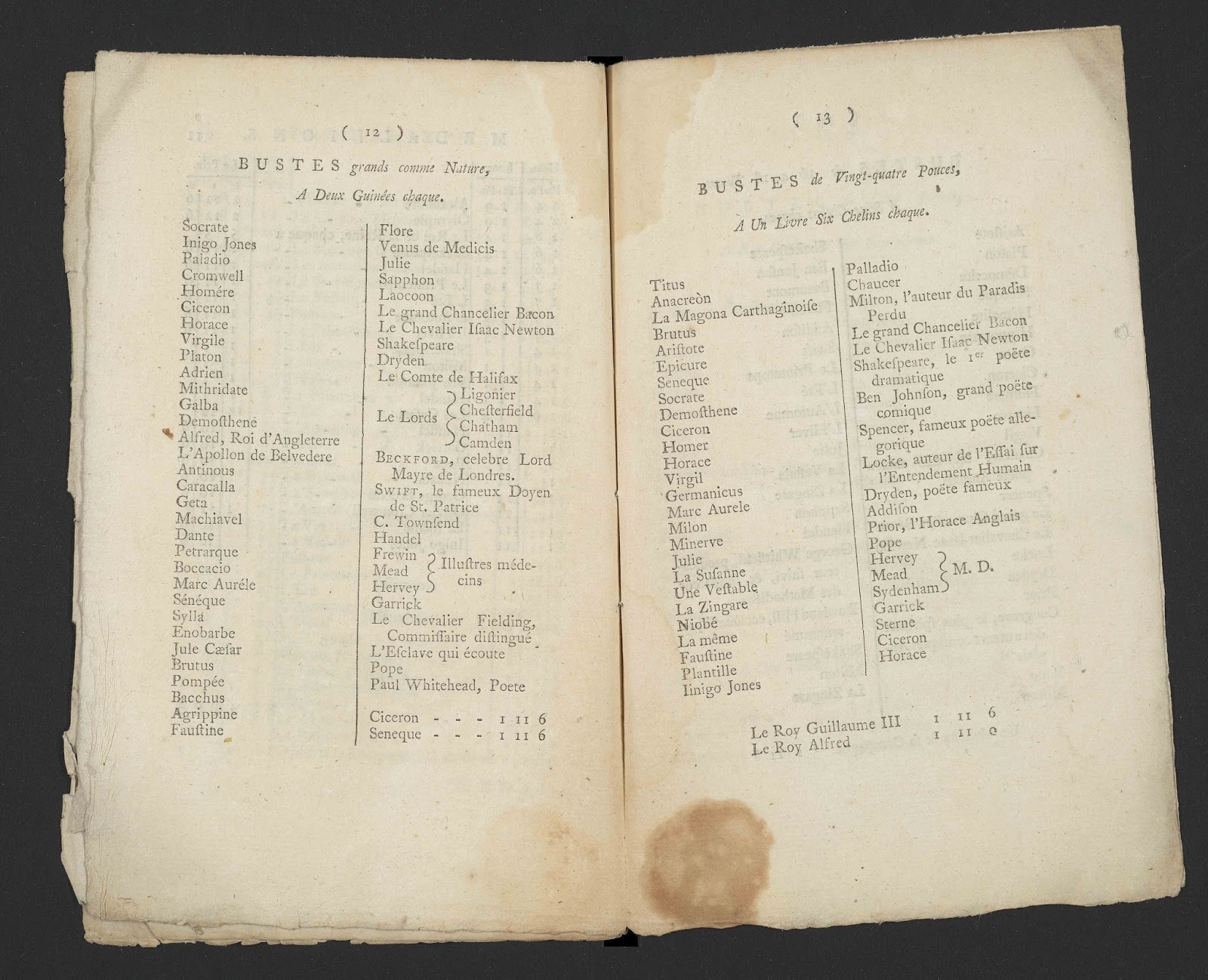 Posted by David Bridgwater at 12:43