Marble Bust of an Unknown Man attributed to John van Nost III, Louvre, Paris, and the Marble Bust of George Pitt in the Victoria and Albert Museum and related busts.

Bust of an Unknown Man,
attributed to John van Nost III,
Louvre, Paris.
734 mm tall.
This post edited and updated 27 February 2021.
Formerly attributed to Louis-François de Roubiliac (1702 -1762),
as Sir Edward Walpole (1706-1784).
Acquired by the Louvre with an hypothetical attribution to Henry Cheere.
Attributed in 1992 by Malcom Baker to John Van Nost III? and dated circa 1750.
I am doubtful about this attribution and believe the sculptor of this bust needs to be reassessed.
My feeling is that it is slightly earlier than 1750 perhaps circa 1735 - 1740, see the bust on the monument to Orlando Humfreys at Barking Parish Church (below).
My feeling is that this bust is most likely to be by Roubiliac, perhaps sub contracting to Henry Cheere.
Collection F. Leverton Harris; sale, London, Christie's, Manson and Woods, 7th June 1928, n°42 Acquired by Stettmer Collection the dealer Camoin, Paris,  Acquired by the Louvre 1989.
The Louvre website is not great for images of 3 dimensional objects.
This bust could be by one of several sculptors - it shows some distinct similarities with a bust of George Pitt by Henry Cheere in the Victoria and Albert Museum particularly the fluttering tie on the shirt.
It has for a log time been my suspicion that although Henry Cheere signed many sculptures, he might not have been the actual author of many of them - giving the carving work to men working in his workshop or subcontracting it.
Given that we know very little of what Roubiliac did between his arrival in London in 1730 and his first mention as an independent sculptor (Senesino in a newspaper in 1735) it is quite possible that he was working for Henry Cheere amongst others and continued to do so.
He certainly worked a little later from 1743 with Scheemakers on the busts at Trinity College Dublin which I will be coming to shortly on this blog.
It might be that Mrs Esdaile was correct after all ascribing this bust to Roubiliac.
(Sir) Henry Cheere and his sculpture and sub contracting is a subject that I might approach in the future. Matthew Craske has already published on the subject in both The Silent Rhetoric of the Body pub. Yale 2007 and in The Lustrous Trade ed Cinza Sica. 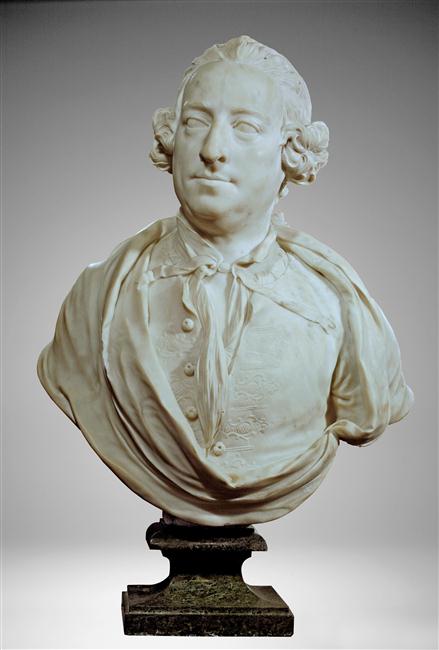 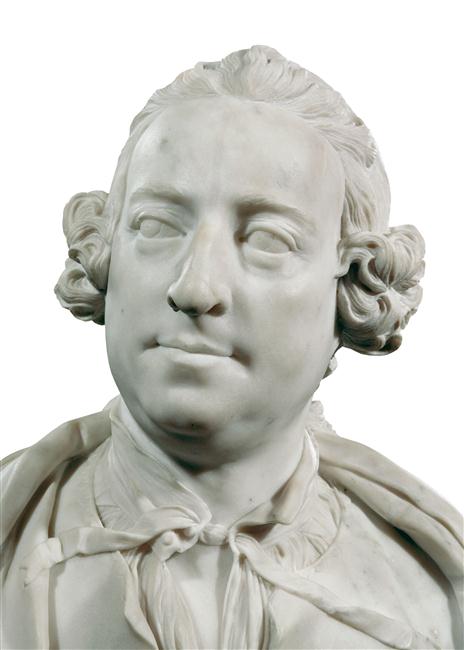 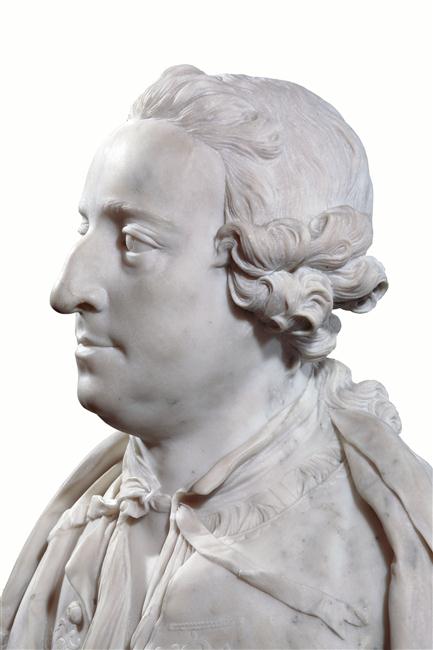 Photographs from the Louvre. 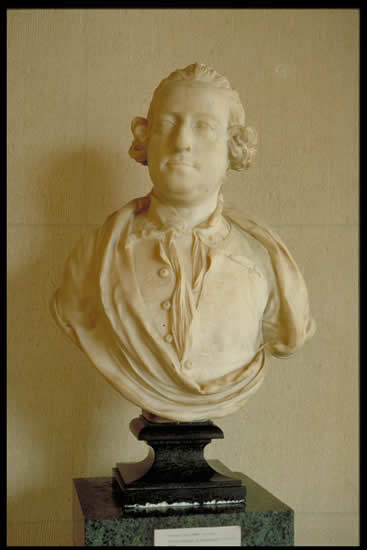 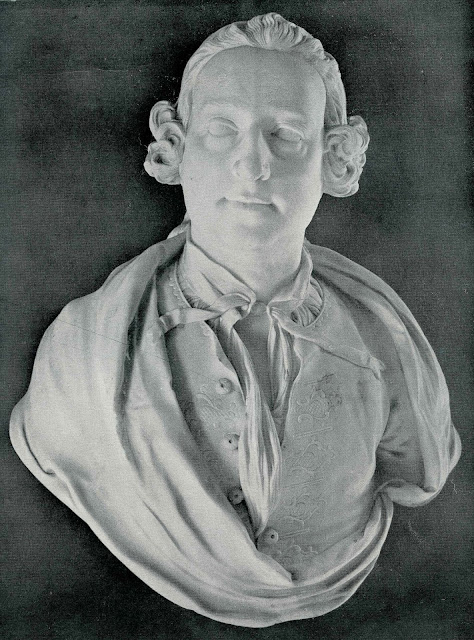 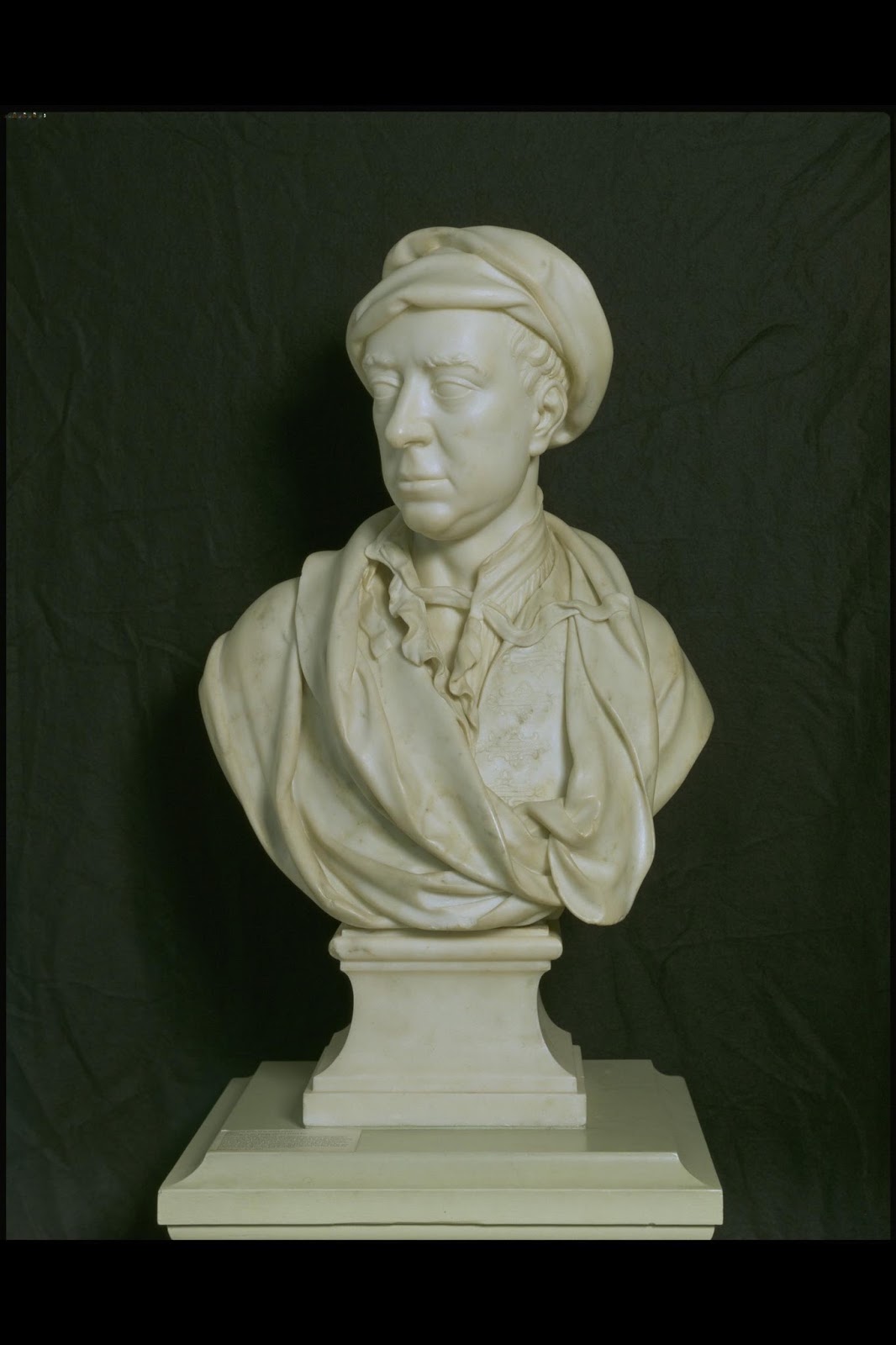 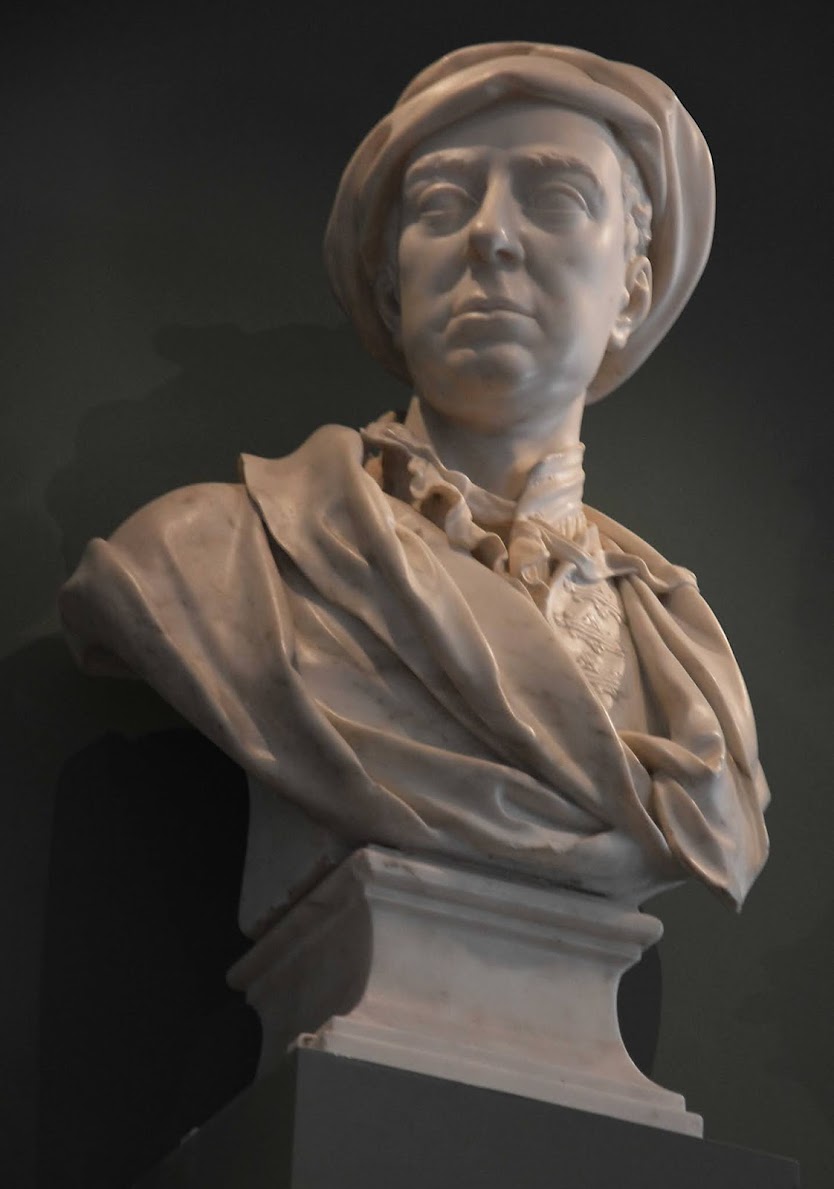 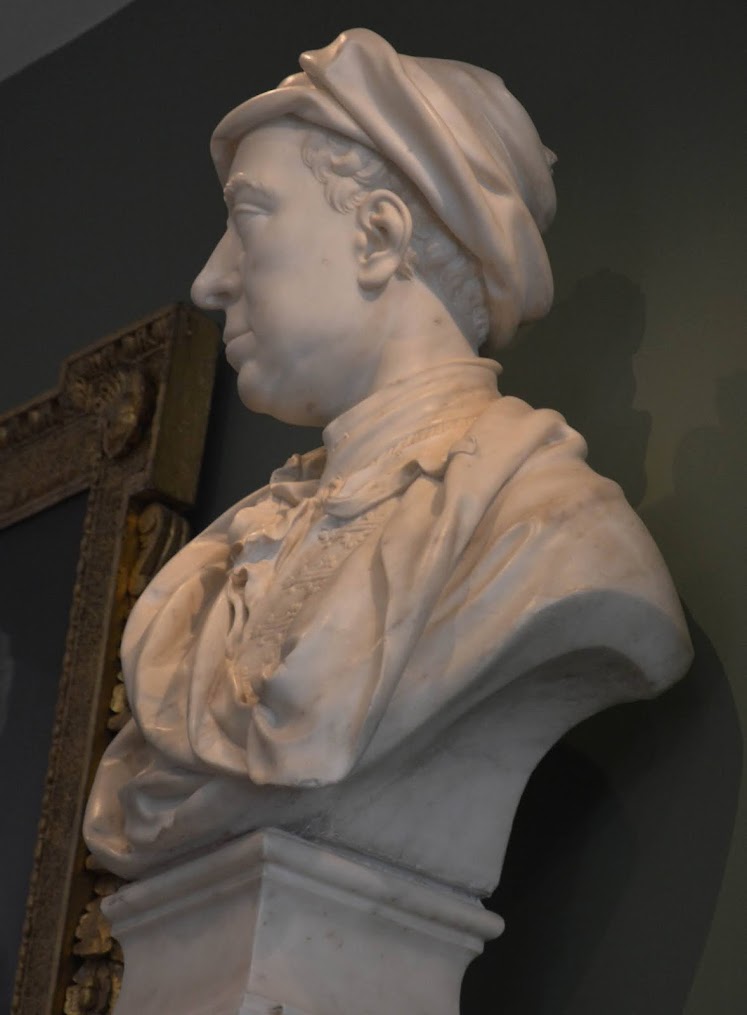 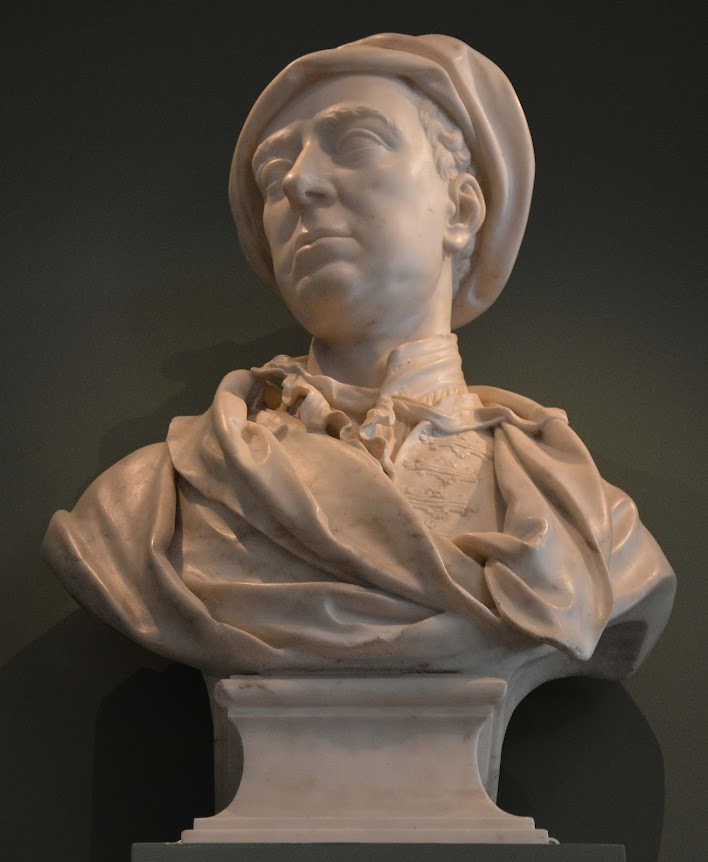 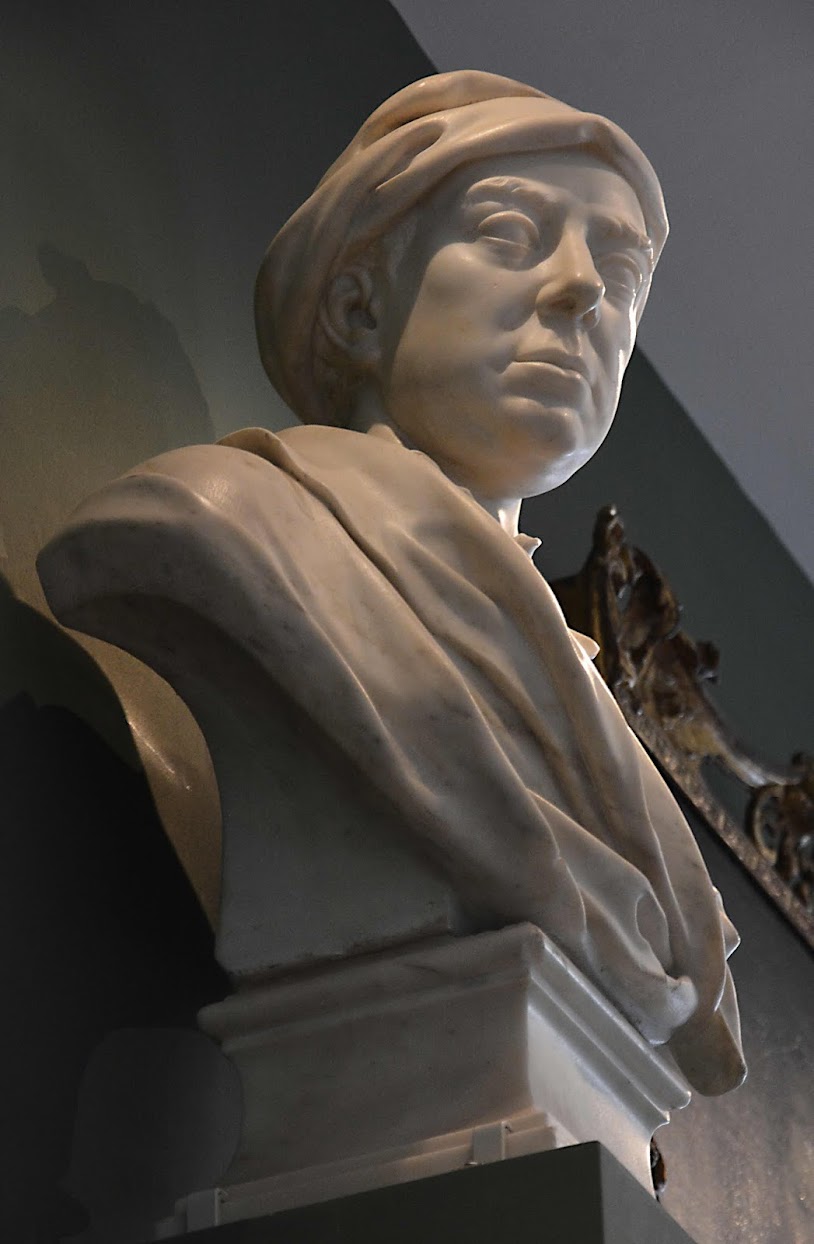 Photographs above by the author.
Marble bust of George Pitt (1663 - 1735).
Formerly of Stratfield Saye.
They say by Henry Cheere (1703 - 81).
I would suggest Roubiliac sub contracted to Henry Cheere

Bought by the V and A for £25,000 in 1981.
It is peculiar that there is no mention of the Stowe Catalogue entry on the V and A website

I sincerely hope the rather lumpy socle will be replaced at some time in the near future with something more appropriate.
I am posting this for comparison with the Louvre bust.
The V and A say -
"This is a finer version of the portrait on the monument to George Pitt at Stinsford in Dorset, and was probably executed for Encombe House where Pitt's widow and son (John) lived. Between August 1738 and April 1741 Pitt's widow made three payments, amounting to £146.8.0, to Henry Cheere....."
Another version of this bust is on the monument to George Pitt at Stinsford, Dorset (see photograph below), and the marble shown here was probably carved at the same date for the family's house. The bust was said to have been 'executed from a model made after his death from recollections by his son John Pitt', a distinguished amateur architect, and shows George Pitt in the informal dress that was being used frequently by this date for both painted and sculptural portraits.
see - http://collections.vam.ac.uk/item/O8860/george-pitt-bust-cheere-henry-sir/
______________
The Illustration and Catalogue entry for the "Bust of Prior" From the Catalogue for the great Sale at Stowe of 1848.
Obviously this is not of Prior but of George Pitt described by the V and A as probably by Henry Cheere. 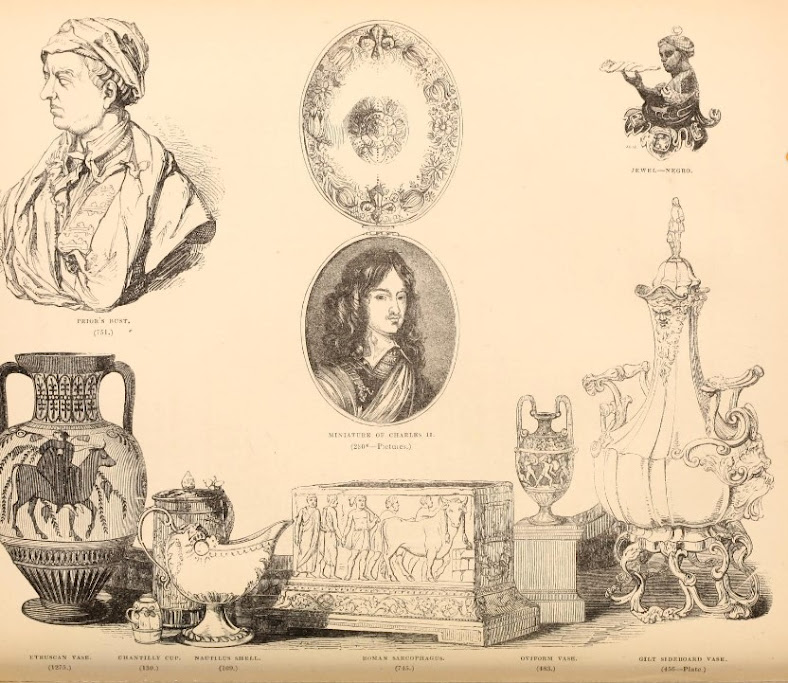 Not relevant to this post but this illustration also shows the marble sarcophagus which was reproduced by the Coade Manufactory. 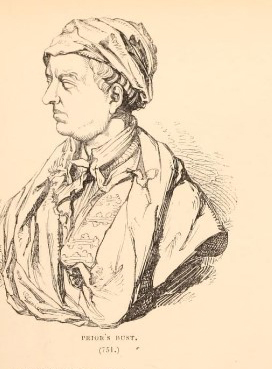 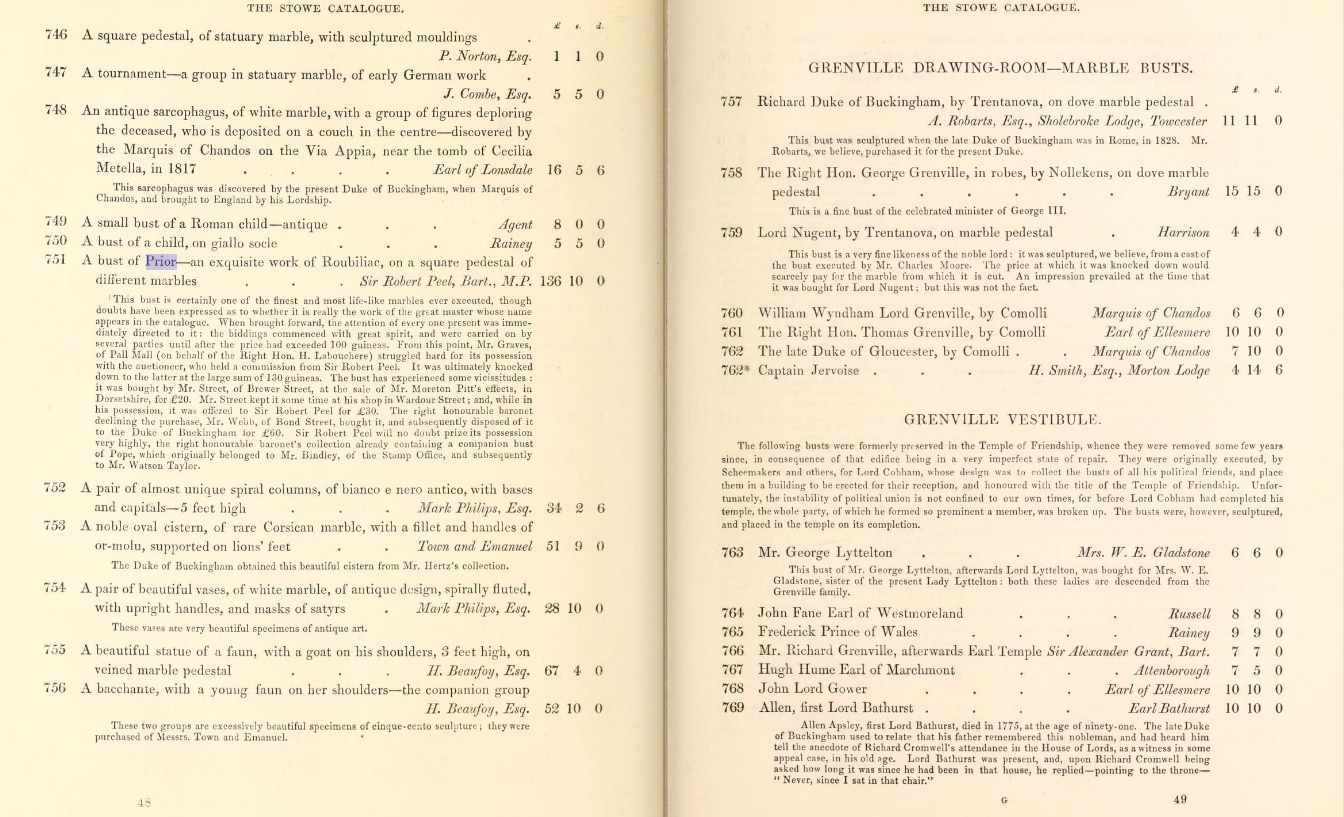 So it is a bust of George Pitt of Stratfield Saye, bought at the sale of Mr Moreton Pitt of Kingston Maurward House in Dorset.
Presumably this is William Morton Pitt (died 1836) of Kingston House, Isle of Purbeck, Dorset.
W Morton Pitt, son of  John Pitt of Encombe and Grandson of the sitter of the bust.
___________
refs.
see - http://www.kingstonopc.org.uk/newspapers/1836-obituary-william-morton-pitt-esq/
https://www.historyofparliamentonline.org/volume/1754-1790/member/pitt-john-1706-87
Sale of Morton Pitts assets after his death see:
https://somerset.epexio.com/records/DD/GL/185
_________________________ 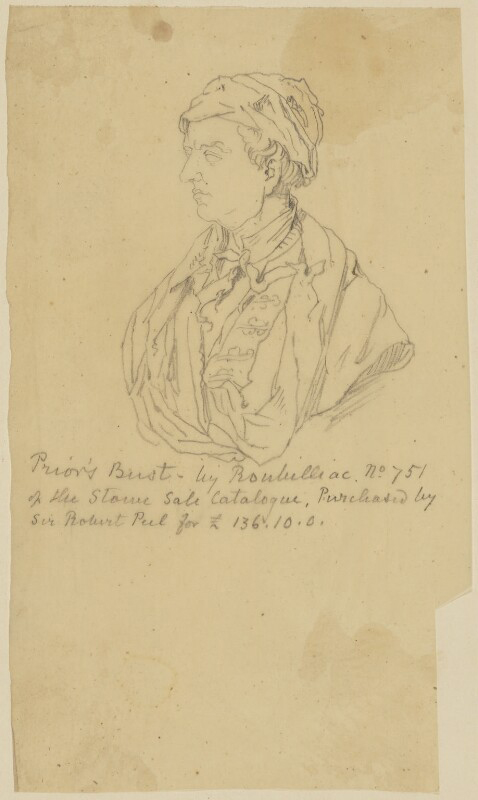 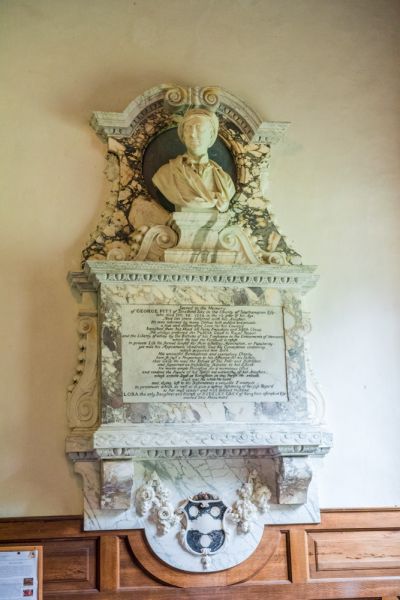 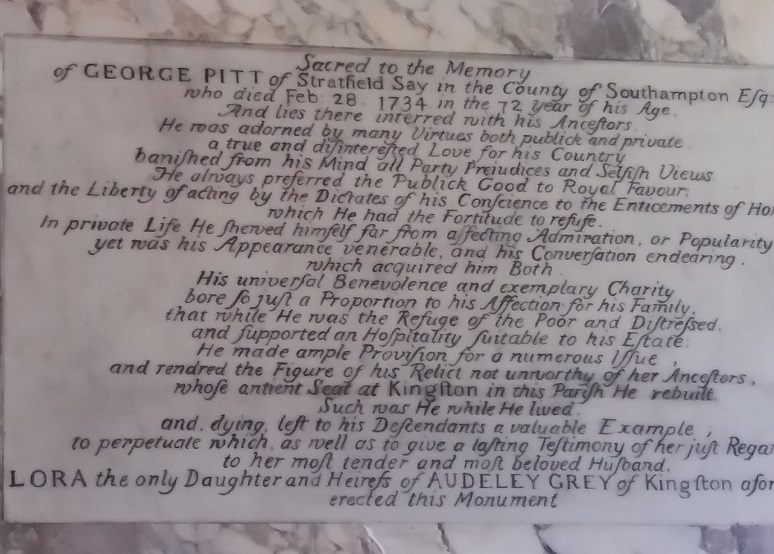 These are currently the best photographs that I can find of this monument.
_______________________
The Bust on the Monument to Sir Orlando Humfreys.
St Margaret of Antioch, the Parish Church Barking.
1737
Here attributed to Roubiliac with no evidence beyond the fantastic quality of the carving.
The conceit of the fluttering tie is once again used on the bust, suggesting to me that it was carved by the same sculptor as the three busts illustrated above.
I have already published the bust on the monument of Dr John Bamber with the bust by Roubiliac - There are several other fine monuments in this church and it is my intention to publish them all on this blog, but for the time being here are photographs of the bust of Orlando Humfreys and the very fine monument to him.
see -
http://bathartandarchitecture.blogspot.com/2019/04/bust-of-dr-john-bamber-by-roubiliac.html 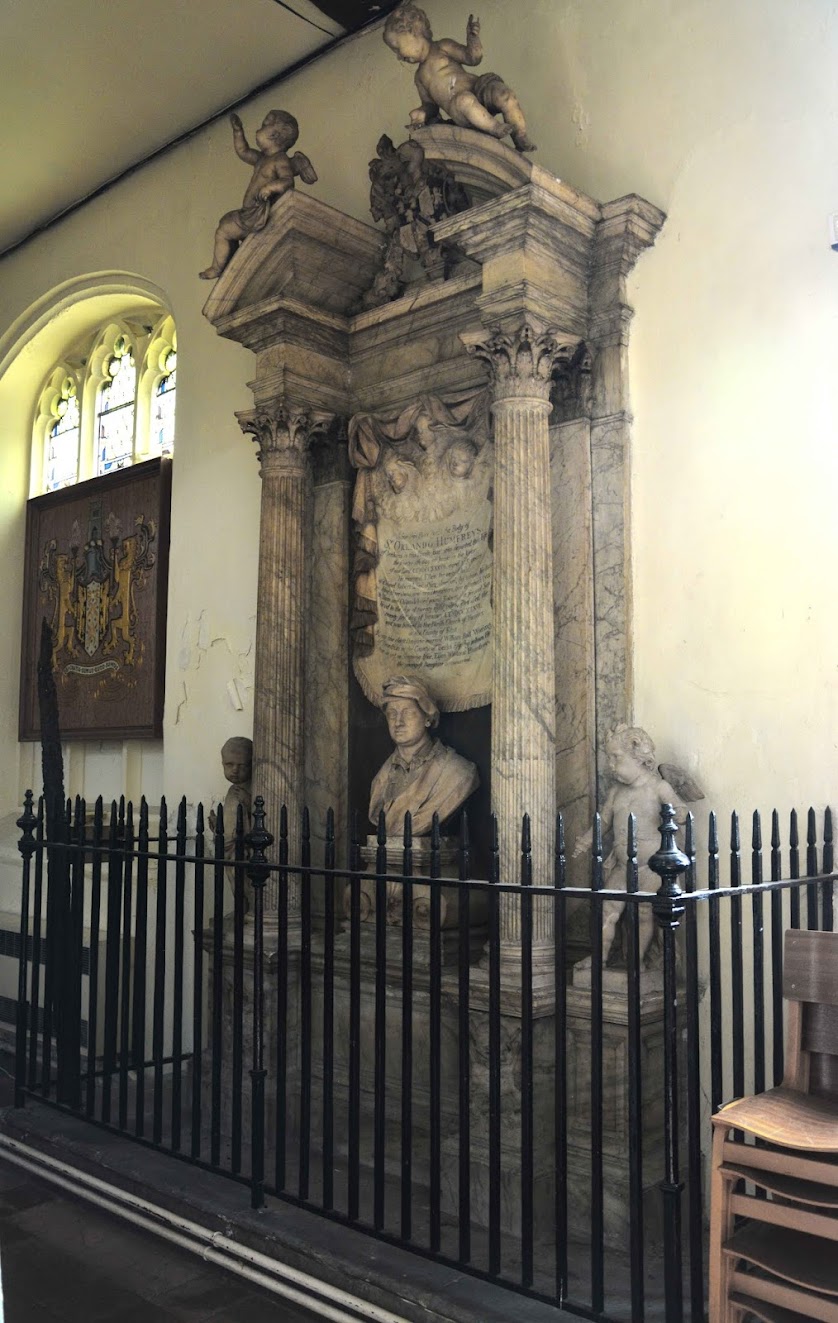 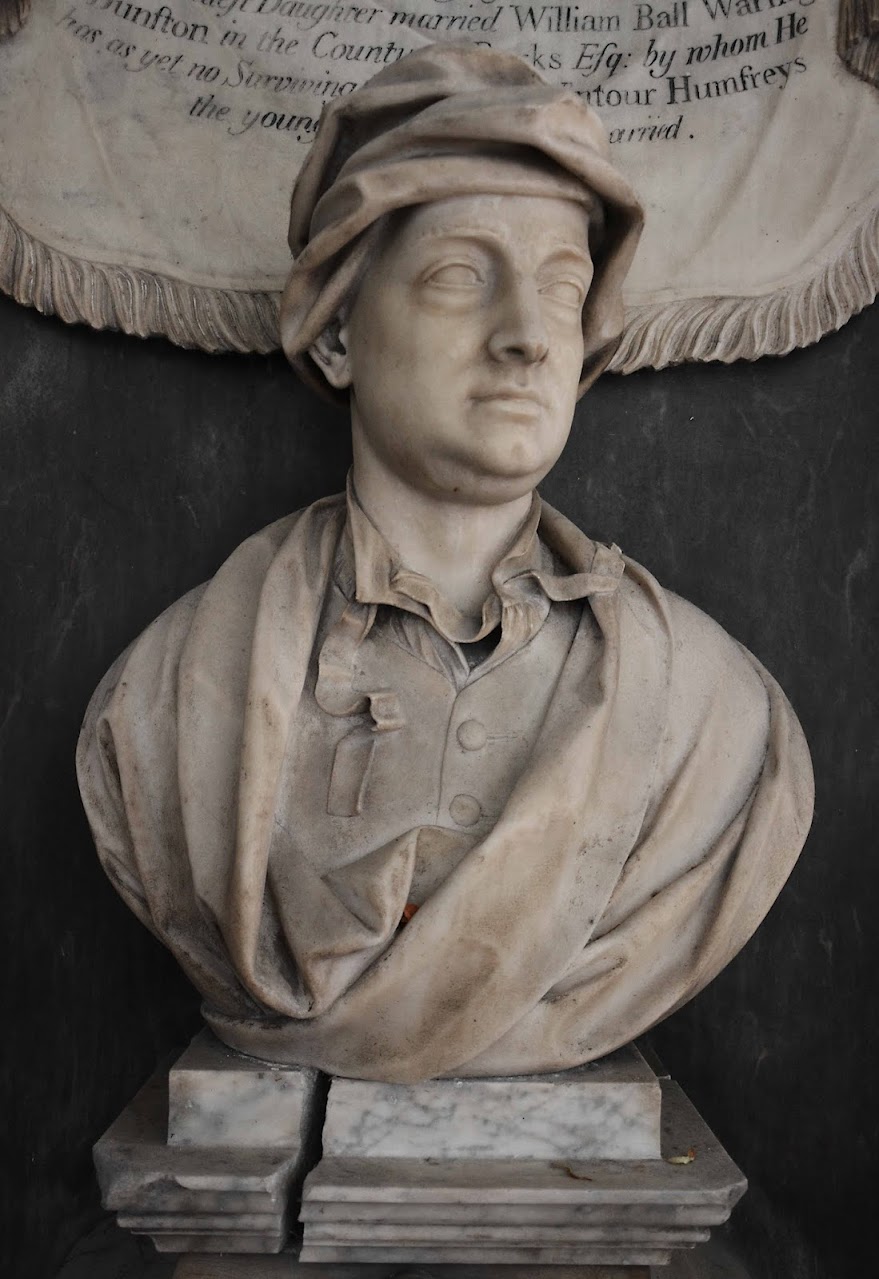 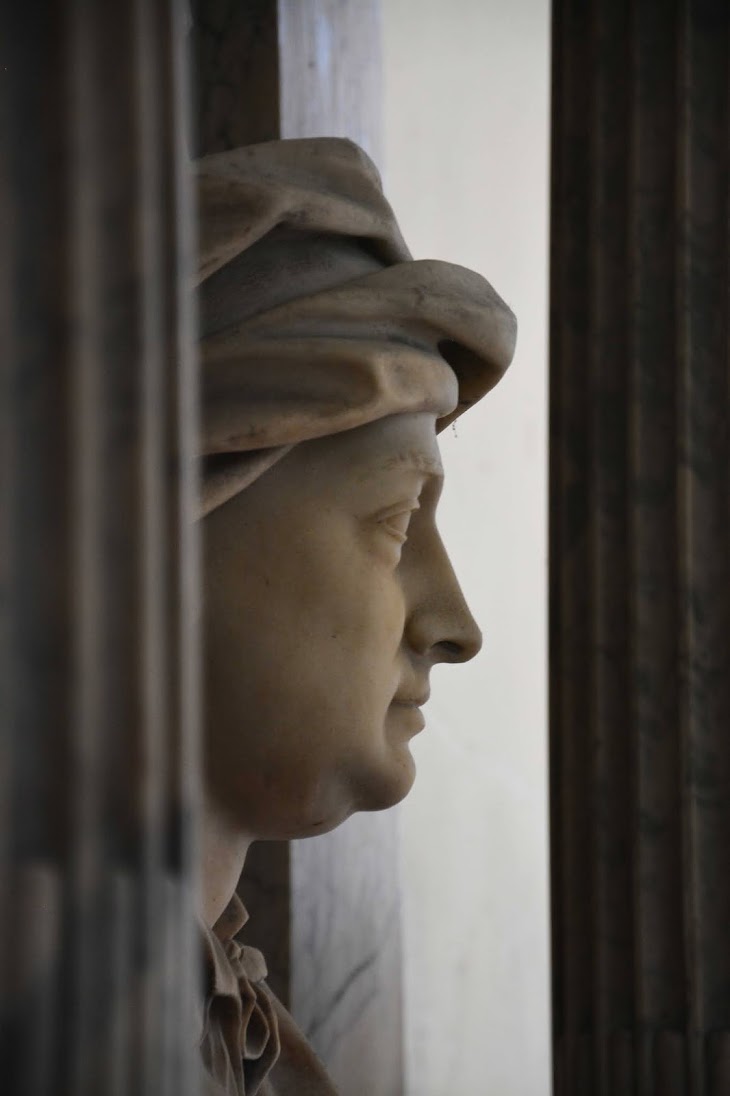 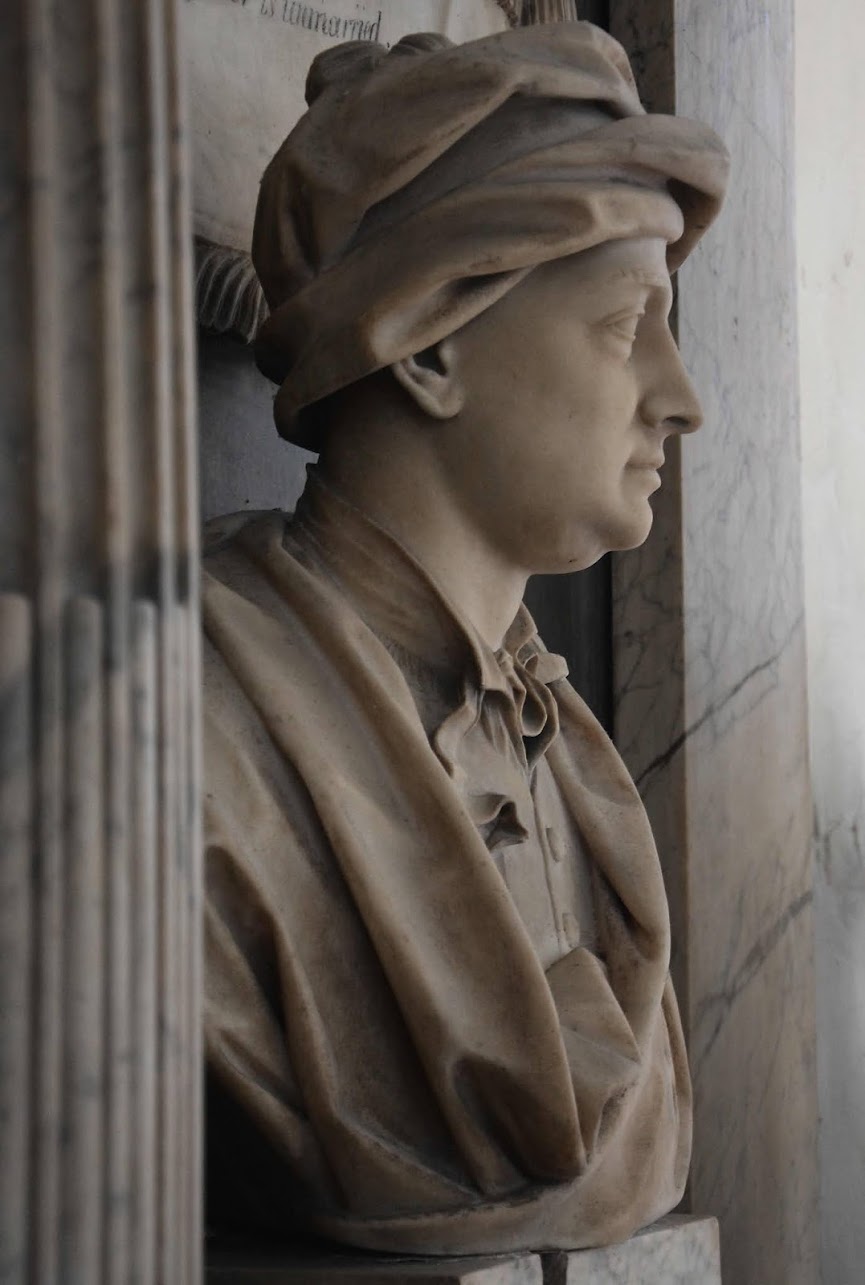 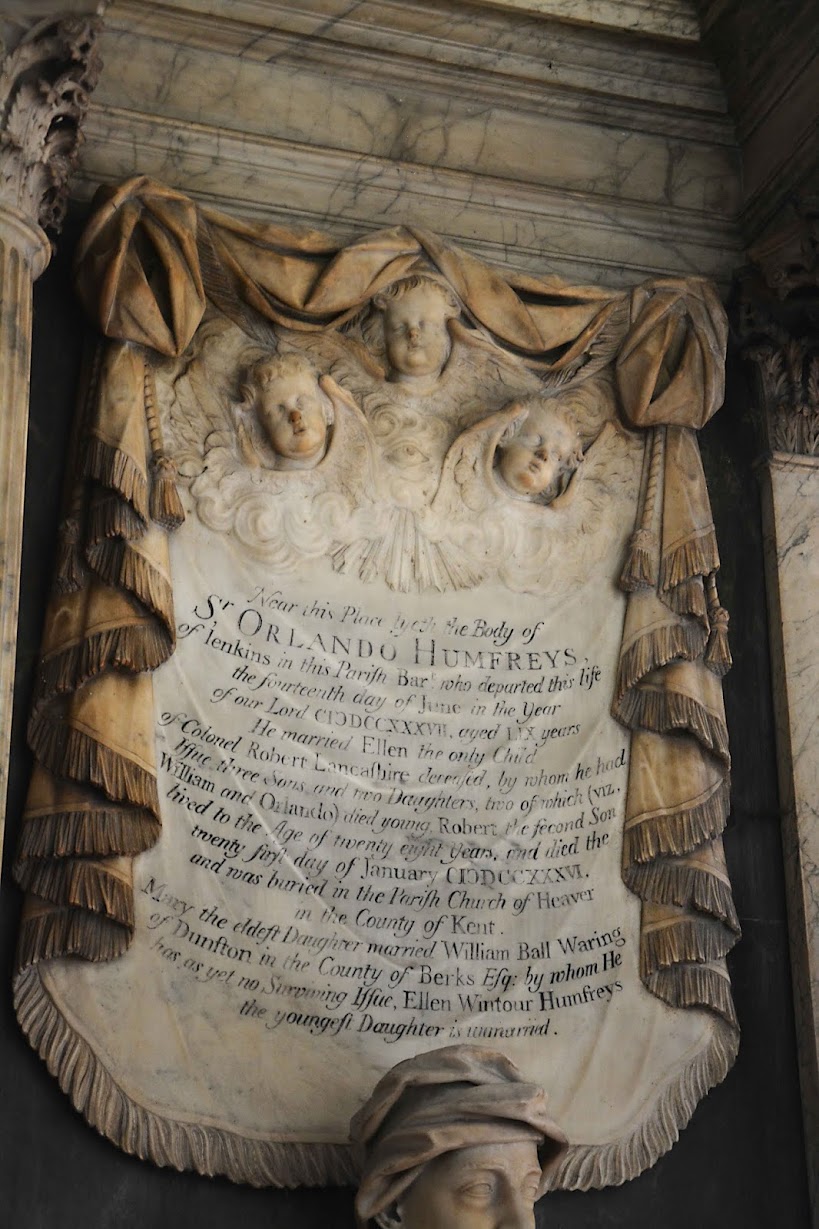 Note the All Seeing Eye. 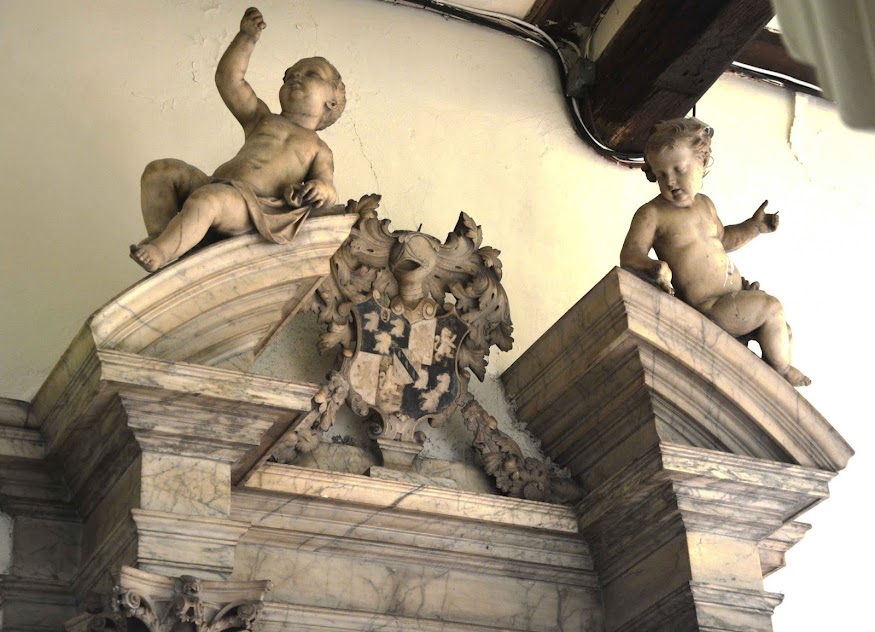 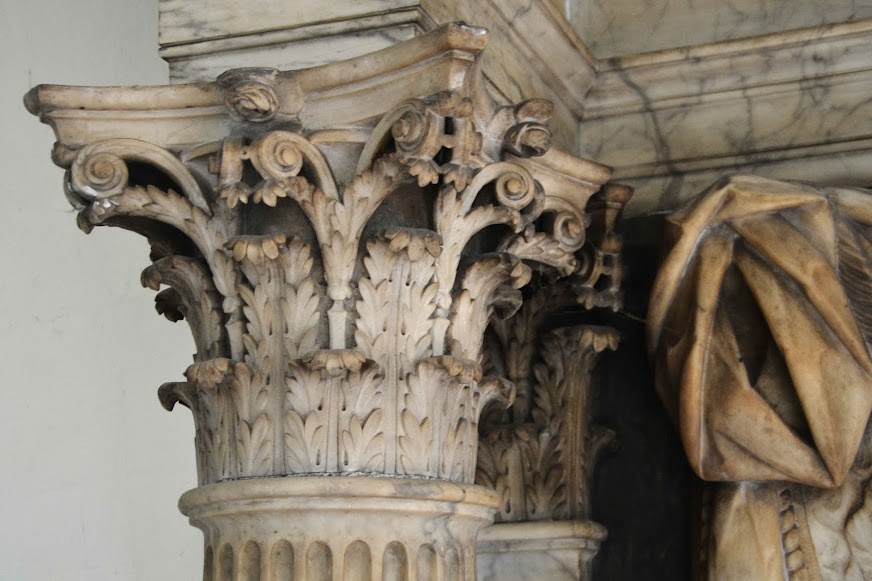 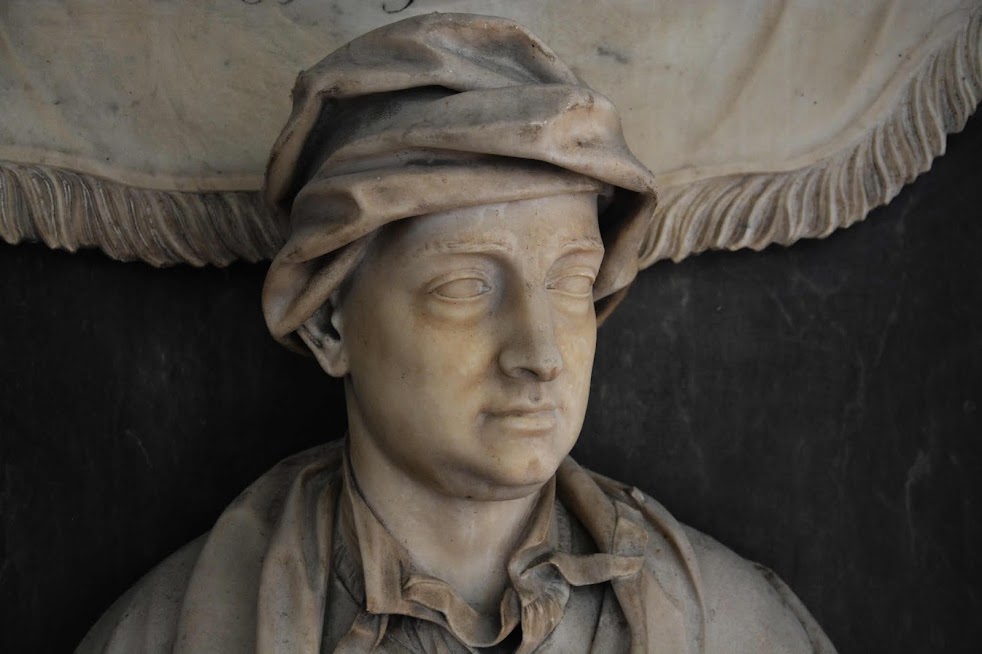 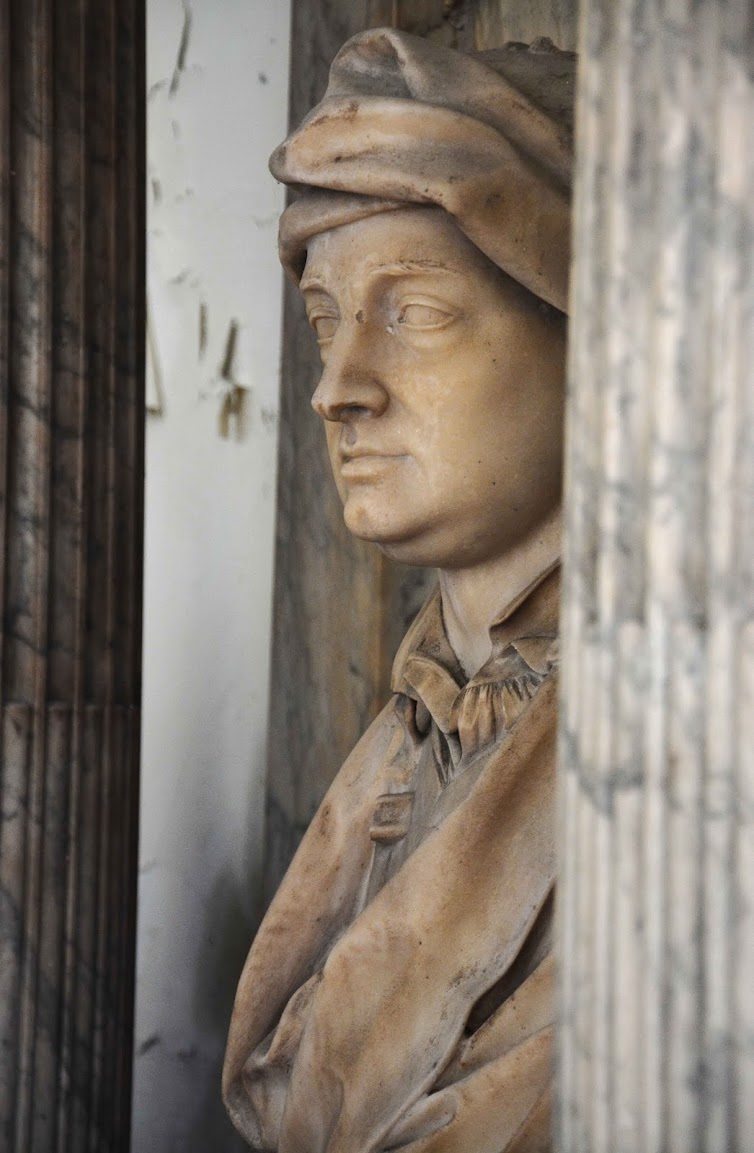 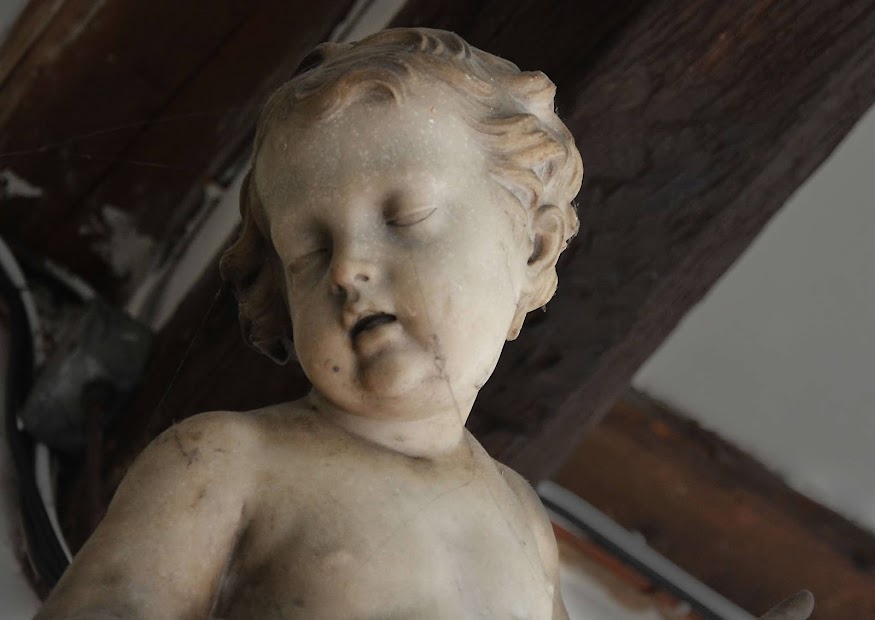 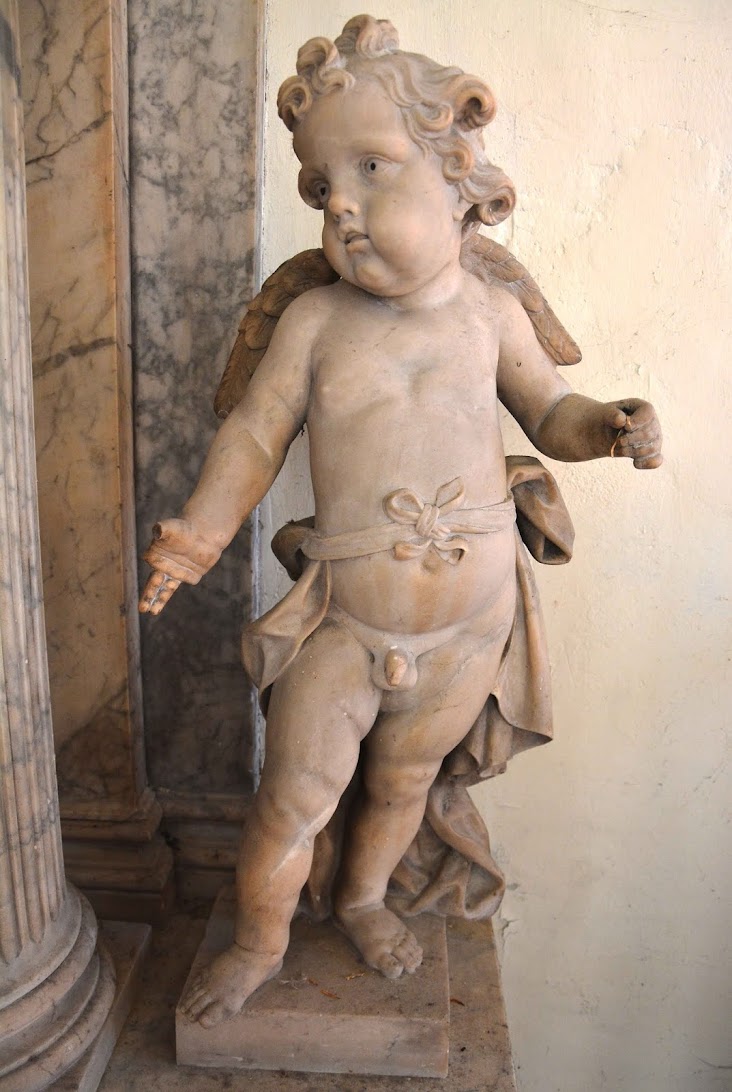 All the photographs above taken by the author.
A very fine monument which could be much improved with the gentle application of a little Fairy Liquid diluted with water and a wipe.
________________________
Posted by David Bridgwater at 16:23