Unrecorded Lead Bust of George I.


A Unique and Unrecorded Lead Bust of George I
Reigned 1714 - 27.
Probably cast by John van Nost II.
Perhaps after an Original by Edward Stanton
Circa 1715.

A bust of George I by Edward Stanton was displayed at the Royal Exchange until the fire in 1738.
see Steward 1978 pp. 216 - 217.
Information from The Lustrous Trade Essay, Edited by Cinzia Sicca  and Alison Yarrington, 2,000 Leicester University Press - essay Recasting George I by Barbera Arciszewska.

For Edward Stanton biography and works see - http://217.204.55.158/henrymoore/sculptor/browserecord.php?-action=browse&-recid=2558
For a somewhat dated but very useful illustrated article on the Stanton family by Mrs Esdaile see -
http://archaeologydataservice.ac.uk/archiveDS/archiveDownload?t=arch-1132-1/dissemination/pdf/085/085_149_169.pdf

A statue of George I in Imperial Garb? by Laurent Delvaux was set up in the New Court of Rolls in about 1724.

A statue of George I in Roman dress, by John Ricketts the Elder, (1691 - 1734), of Gloucester, was put up in Westgate Street in Gloucester in 1720 and was moved to Eastgate Street near the Barley Market house in 1766; its later history has not been traced.
see -
http://www.british-history.ac.uk/vch/glos/vol4/pp248-251 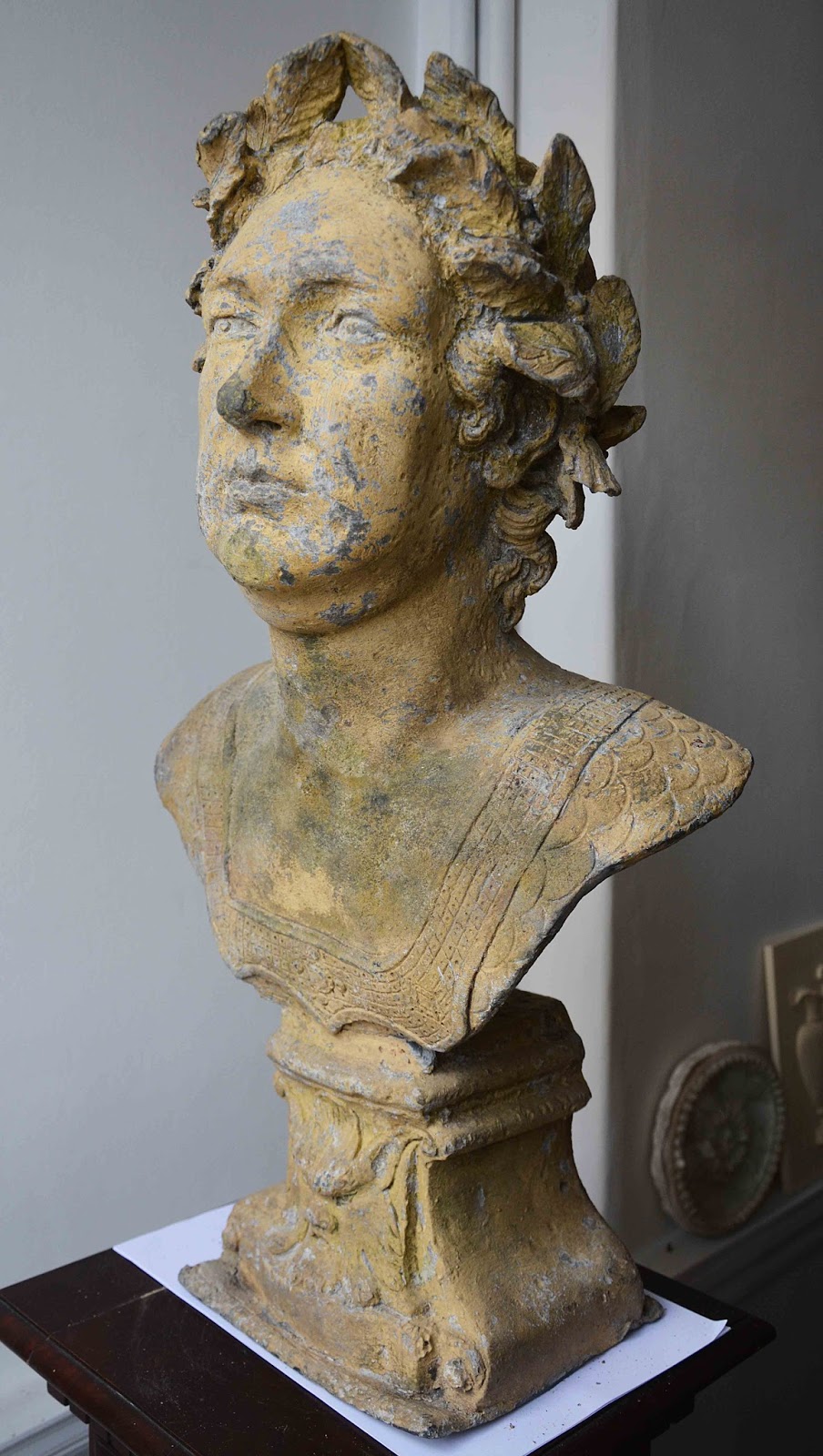 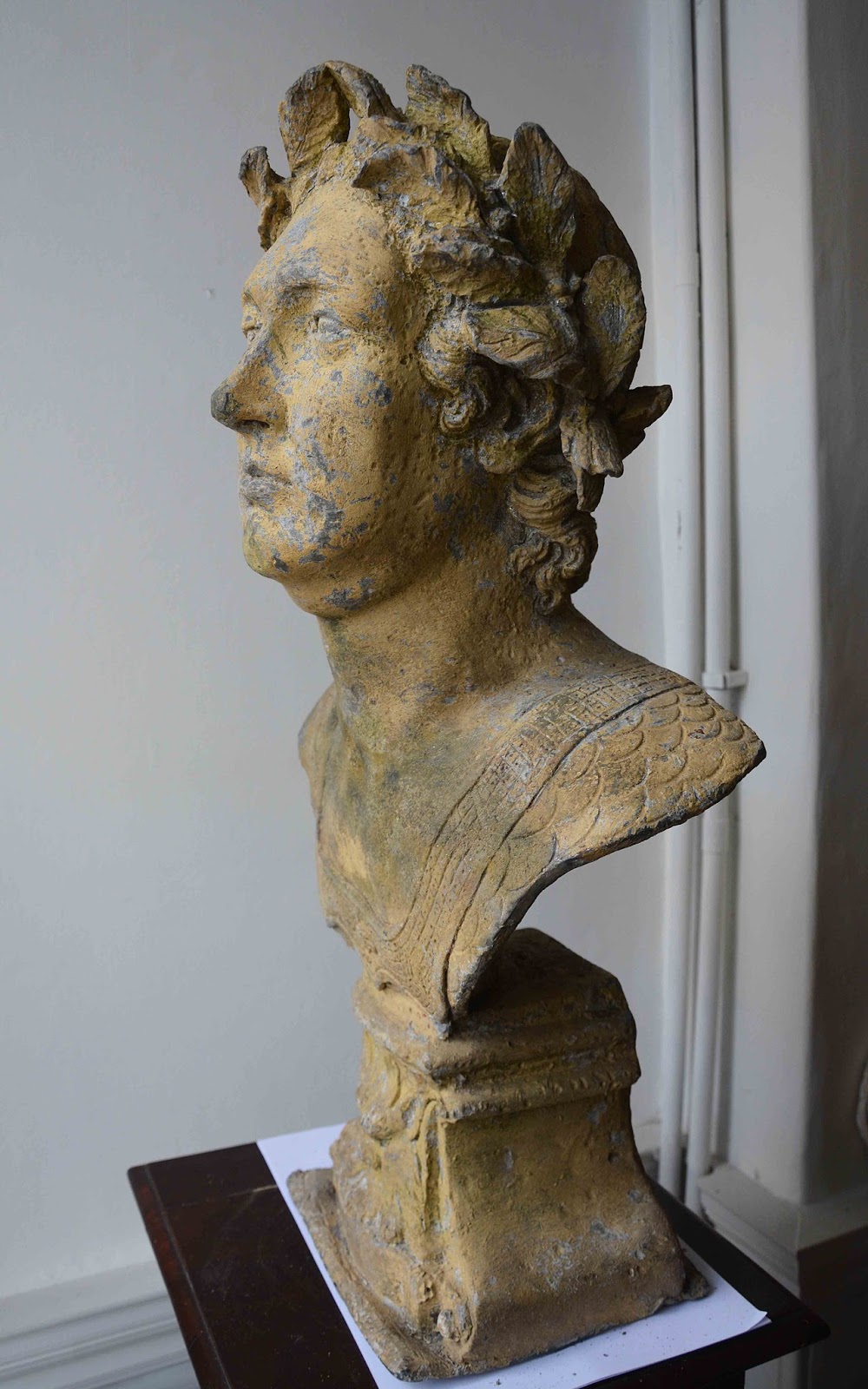 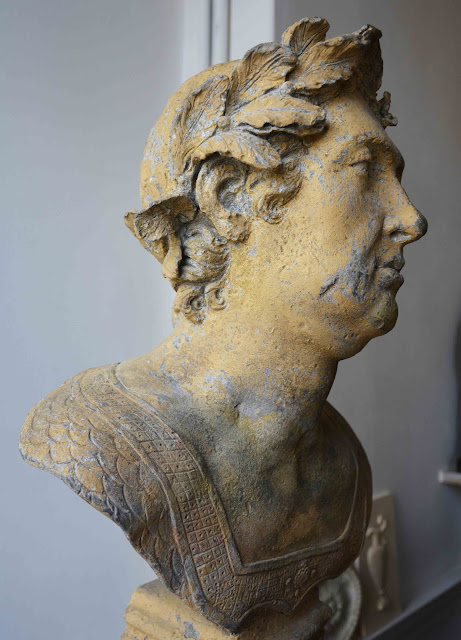 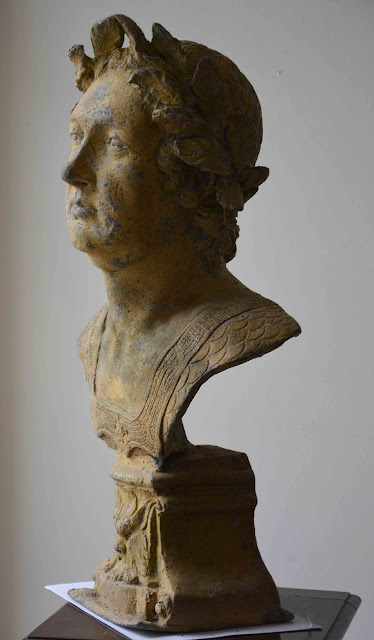 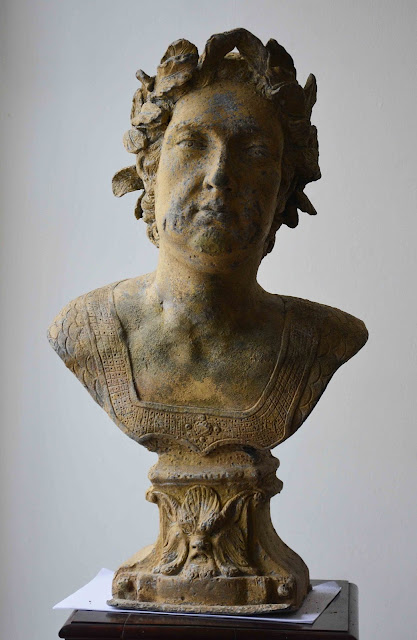 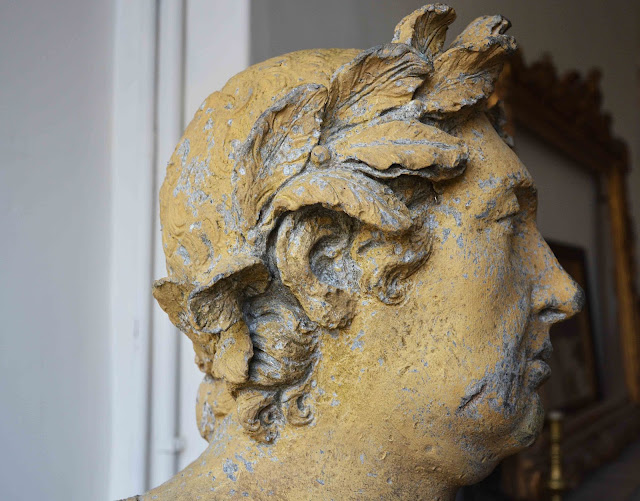 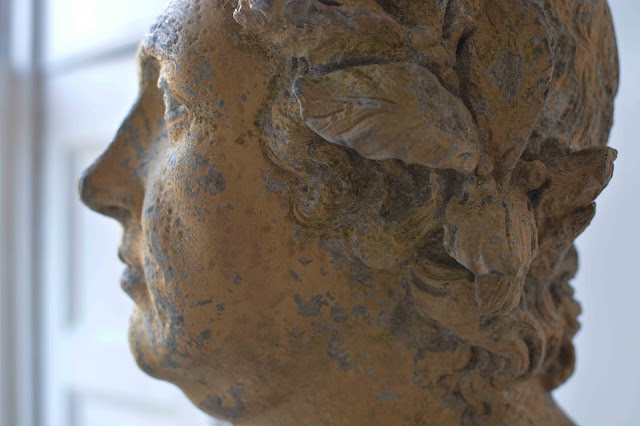 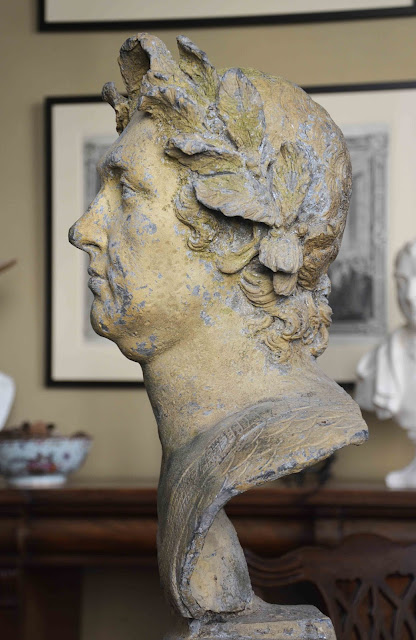 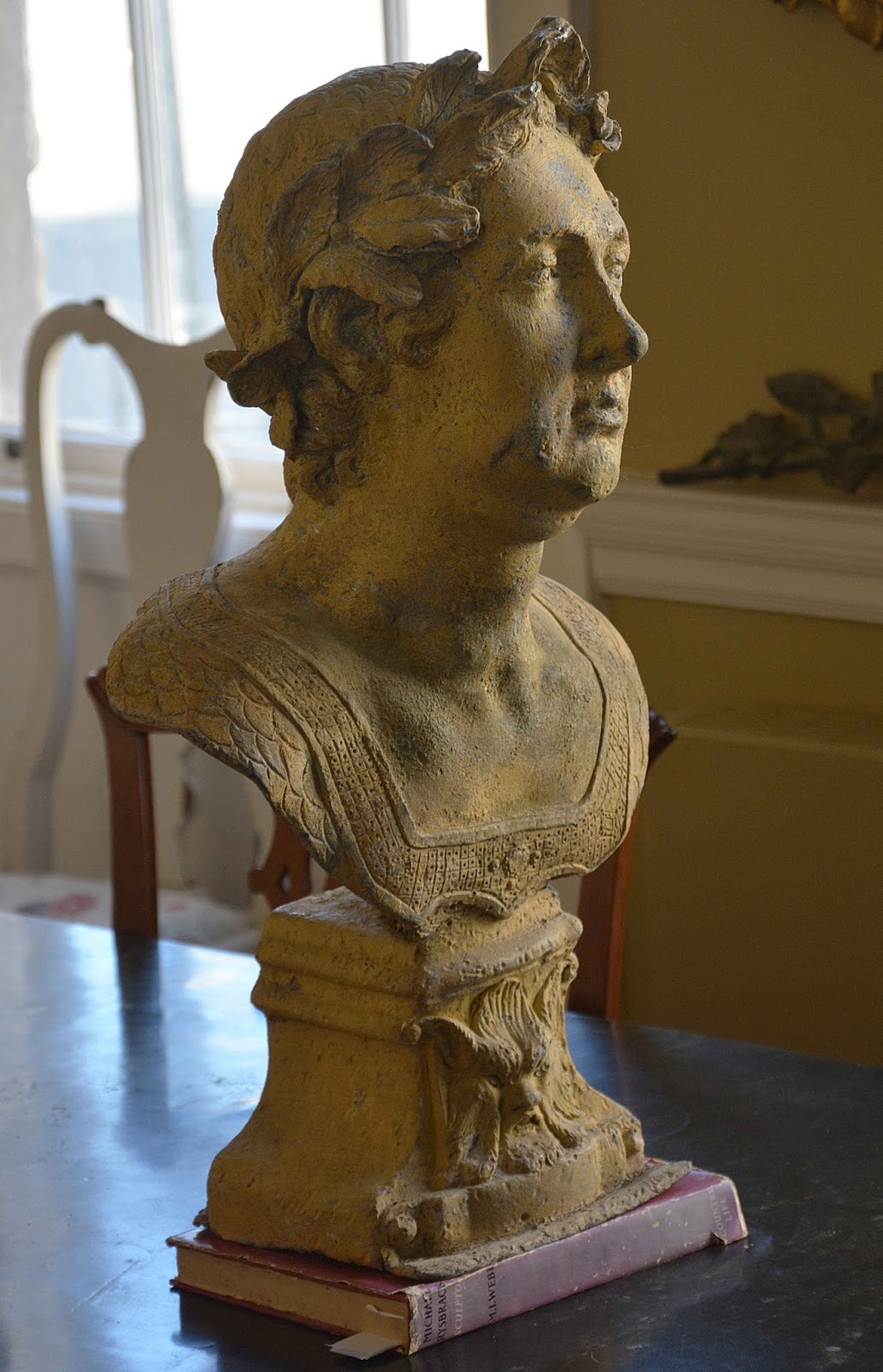 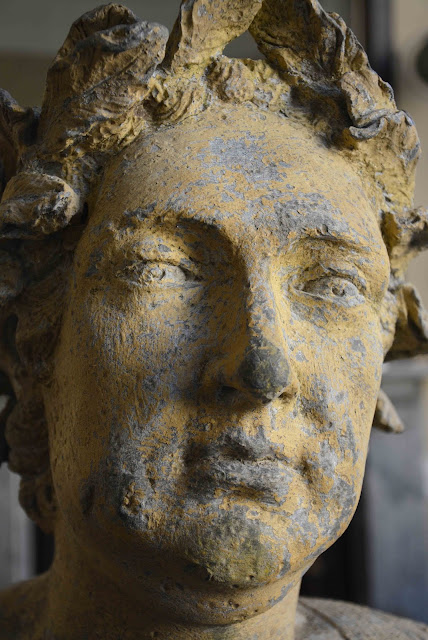 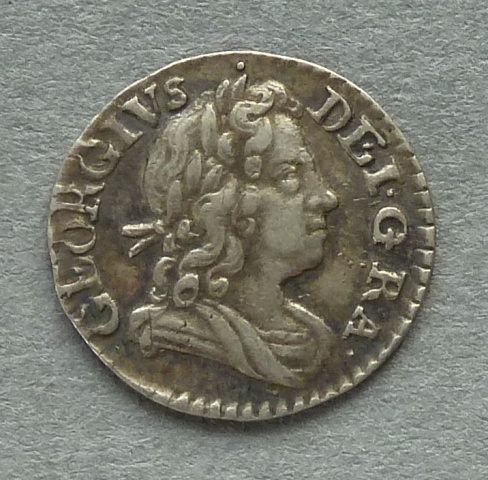 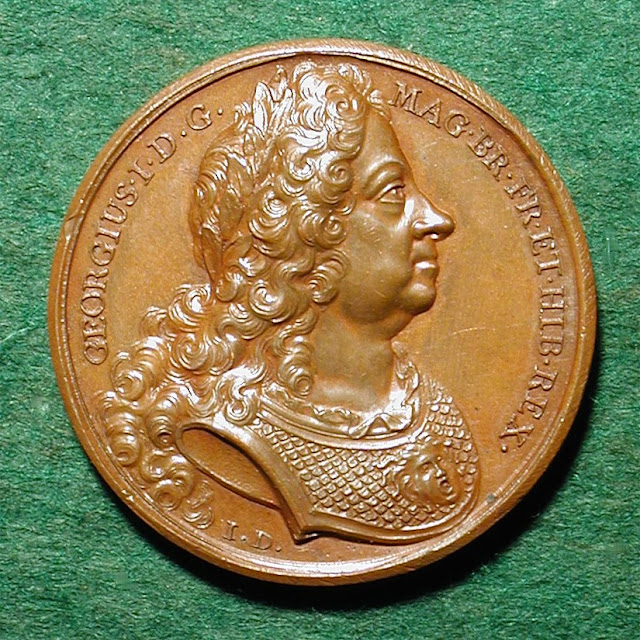 Medallion of George I by Jean Dassier
1731
Bronze
41mm 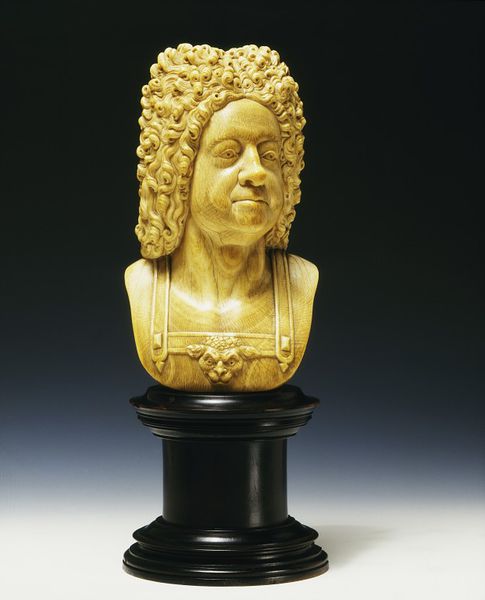 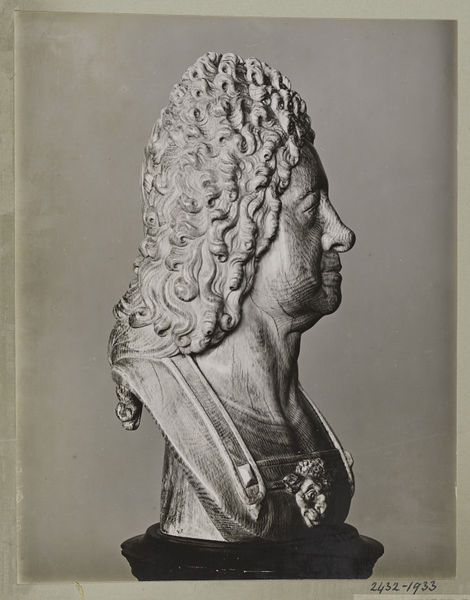 Both images from the Victoria and Albert Museum. 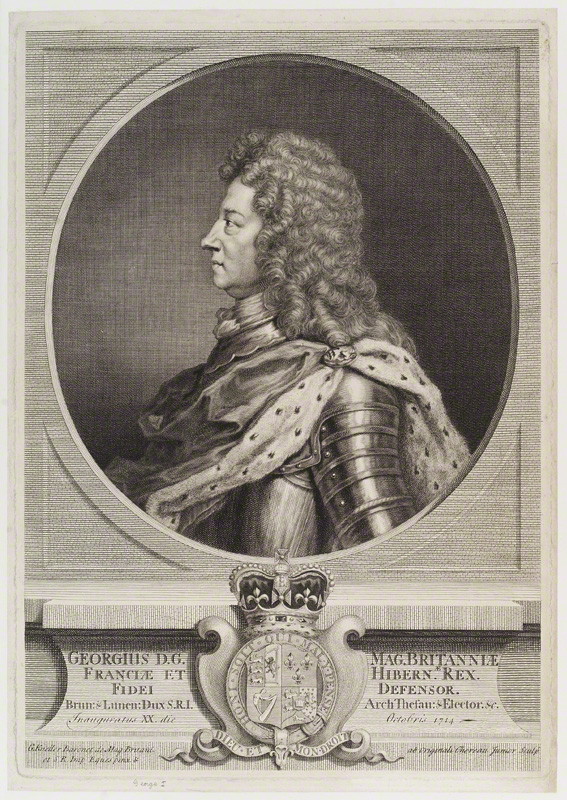 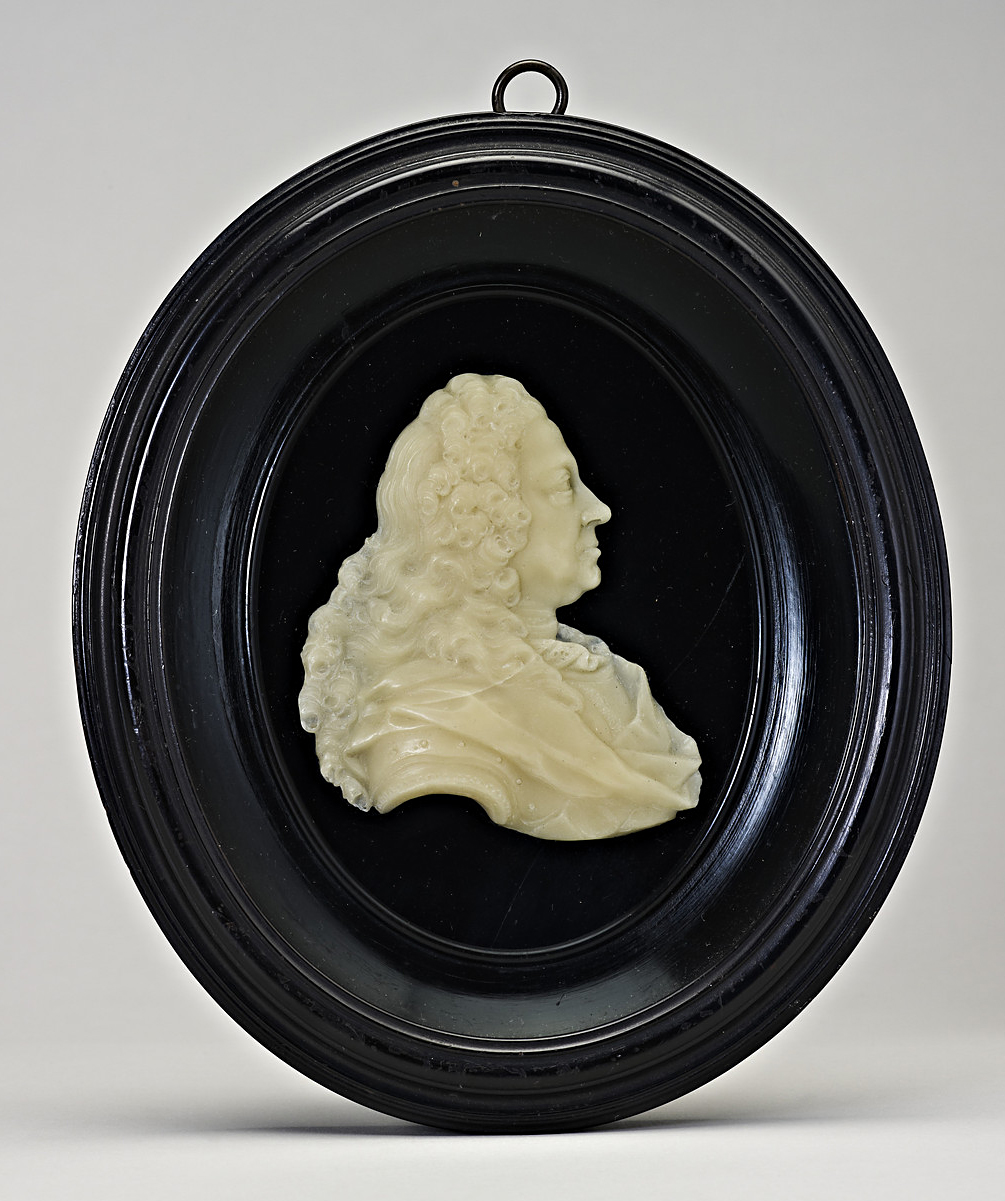 This ivory coloured wax head and shoulder profile portrait depicts George I in profile, facing right. He is shown wearing a full-bottomed wig, armour and a shaped robe. It is set on an oval shaped black-backed ground and with an ebonised moulded oval wooden frame with glazed front. Vertue described the skill of the ‘Ingenious Isaac Gosset’ as ‘so universally approved on for likeness’ that he dedicated a section in his notebooks to wax carving, which he considered a growing industry. Gosset was from a Huguenot family which had fled to Jersey after the Revocation of the Edict of Nantes. The family later moved to London and Isaac learned wax modelling and frame carving from his uncle Matthew. His wax production was prolific and covered both classical and contemporary figures. Gosset’s renown lay in the fact that, unlike most contemporary wax modellers, he worked from life, and at speed, apparently producing a portrait in under an hour. Gosset also created a secret recipe for tinting his wax to appear like old ivory. His waxes were highly fashionable and were sold at four guineas a piece for an original portrait or one guinea for a copy. Vertue noted that Gosset ‘had the honour of the King sitting to him’ as well as ‘great numbers of persons of Quality and persons of distinction – Learned and others’. Queen Caroline is known to have commissioned various works from Gosset, and may even have granted him a pension. The Picture Closet at Kensington displayed numerous waxes, framed both singly and in groups of up to 16 figures. Some Vertue catalogued as historic and contemporary princes but most remained unidentified. Text adapted from The First Georgians; Art and Monarchy 1714 - 1760, London, 2014. Provenance
Possibly from the collection of George III.

Text and image from - Royal Collection. 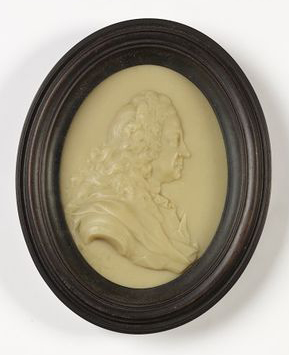 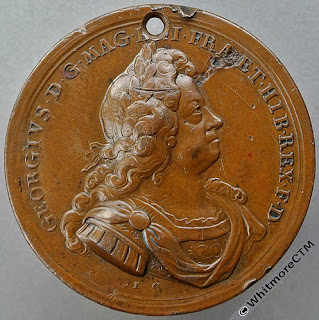 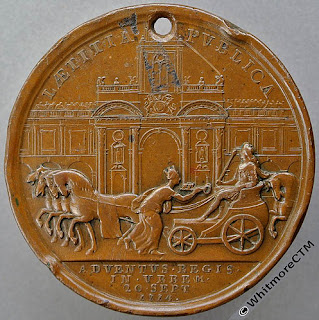 The reverse showing London presenting the key of the city in front of the Royal Exchange.

From a mintage of 1200 incorporating several different dies. The other example on this site is struck from different dies. Note the beading on the king's cuirass and throne, and the positioning of Britannia's spear for example.

Image above from Sovereign Rarities.

From the consignor: "In a prelude to the War of the Quadruple Alliance one of the Spanish fleets was caught unaware off the coast of Sicily. It was defeated under the leadership of British Admiral Byng on August 11, 1718. The entire Spanish fleet was eventually captured. Four months later the alliance would formally declare war against Spain. In 1720 Spain accepted the terms of the Alliance ending the war".

Image above from Numisbids 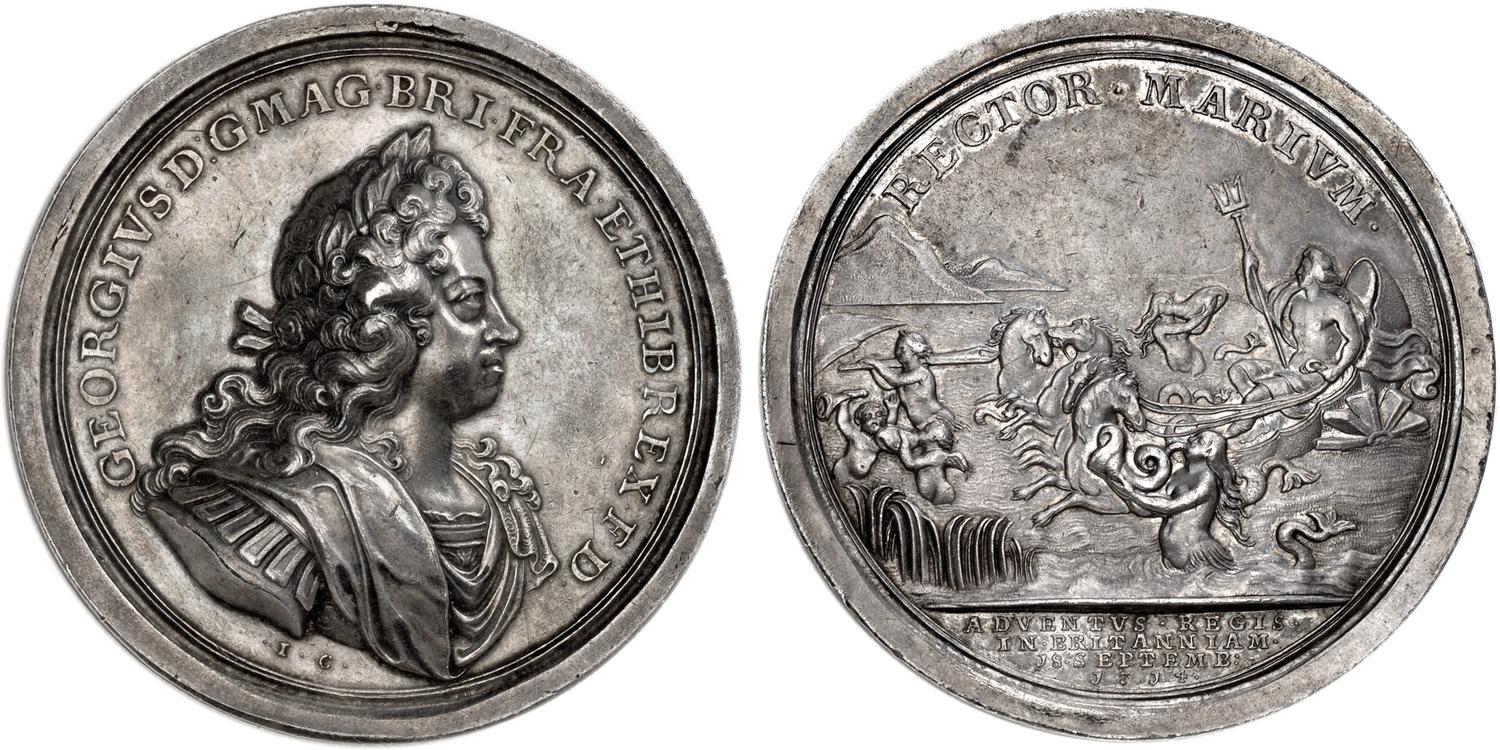 Considered essential to the British monarchy, the dominion of the seas is depicted on this medal through the portrayal of the newly-anointed king George, an elector of Hanover and the closest protestant relative of Anne, as Neptune and bearing the legend rector marium (lord of the seas).

Image and description from Numisbids. 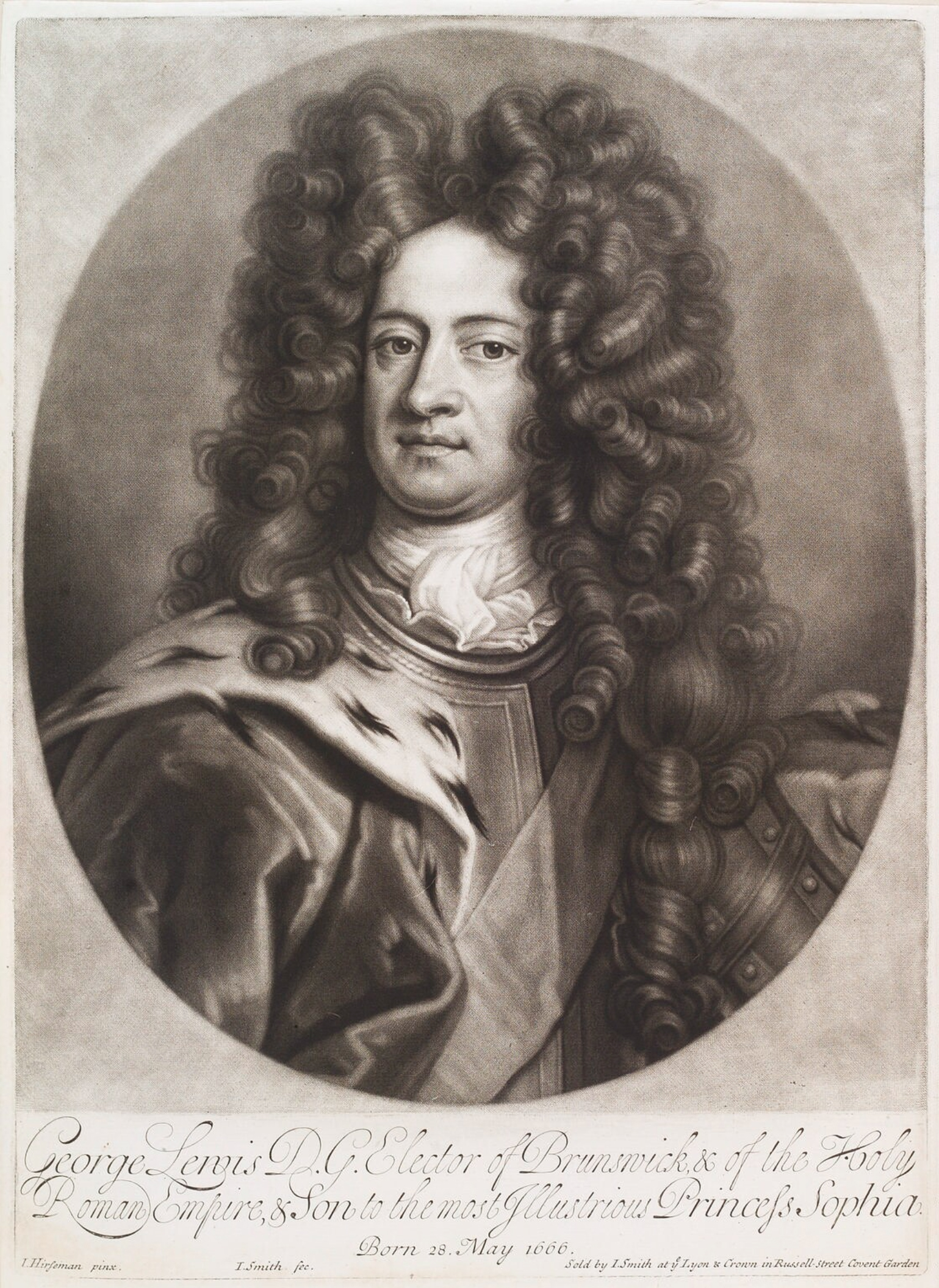 Low resolution of Mezzotint of George I when Elector of Hanover. 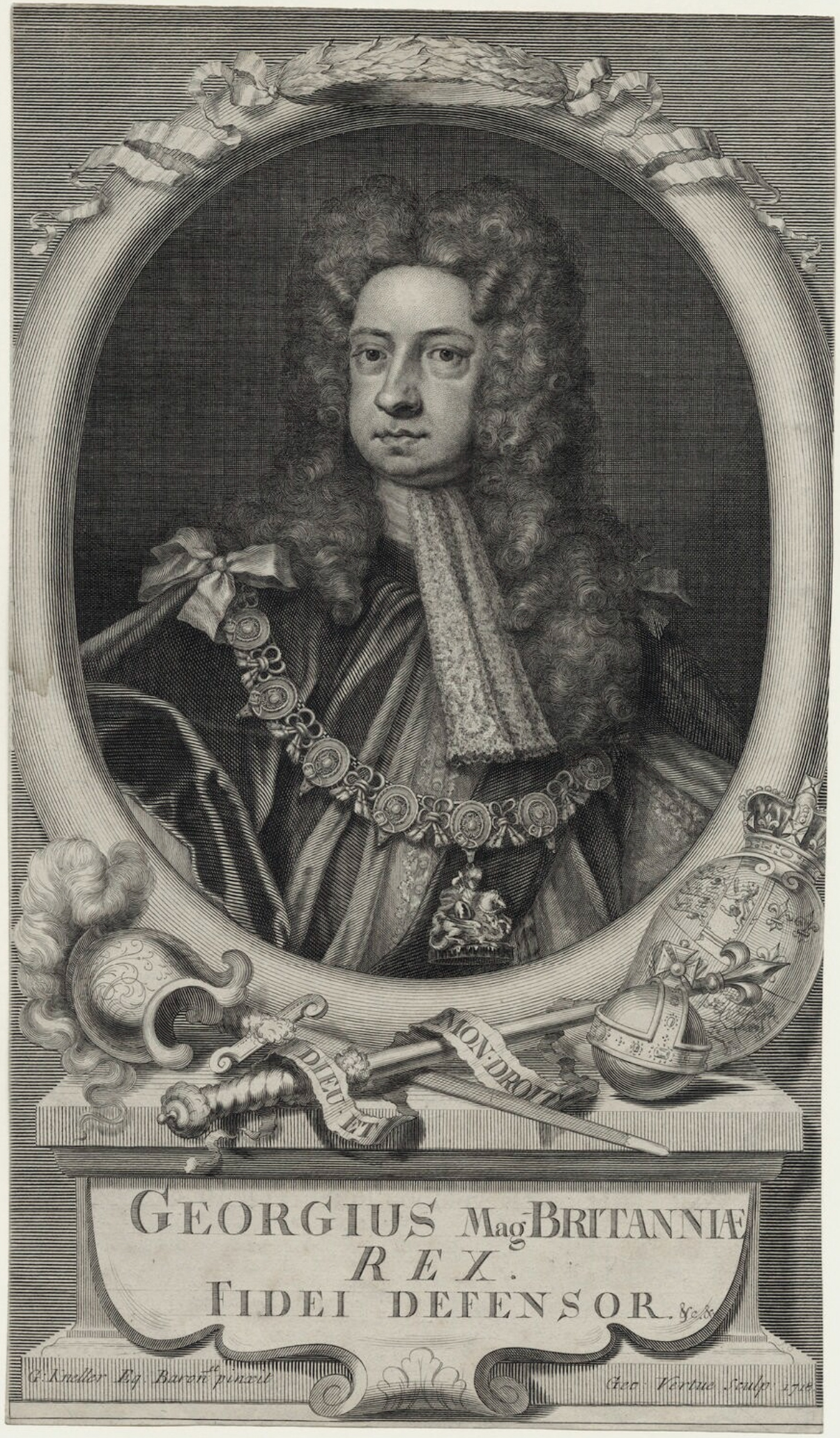 The Line of Kings - Tower Armouries - Tower of London

The figures of George I and George II were placed in the line in 1750 and 1768 respectively. The inclusion of George I, somewhat belatedly, had already been approved in 1730 but the order was not completed. Suitable armour to represent George I was finally identified in 1750 at Windsor Castle. The most curious feature to emerge during this period however is the casting of a metal head by the sculptor, John Cheere. This was apparently the only occasion that metal was considered as a sculptured element in the display. However, although the head was not used he was still paid £8 8s 0d for his efforts in 1751. 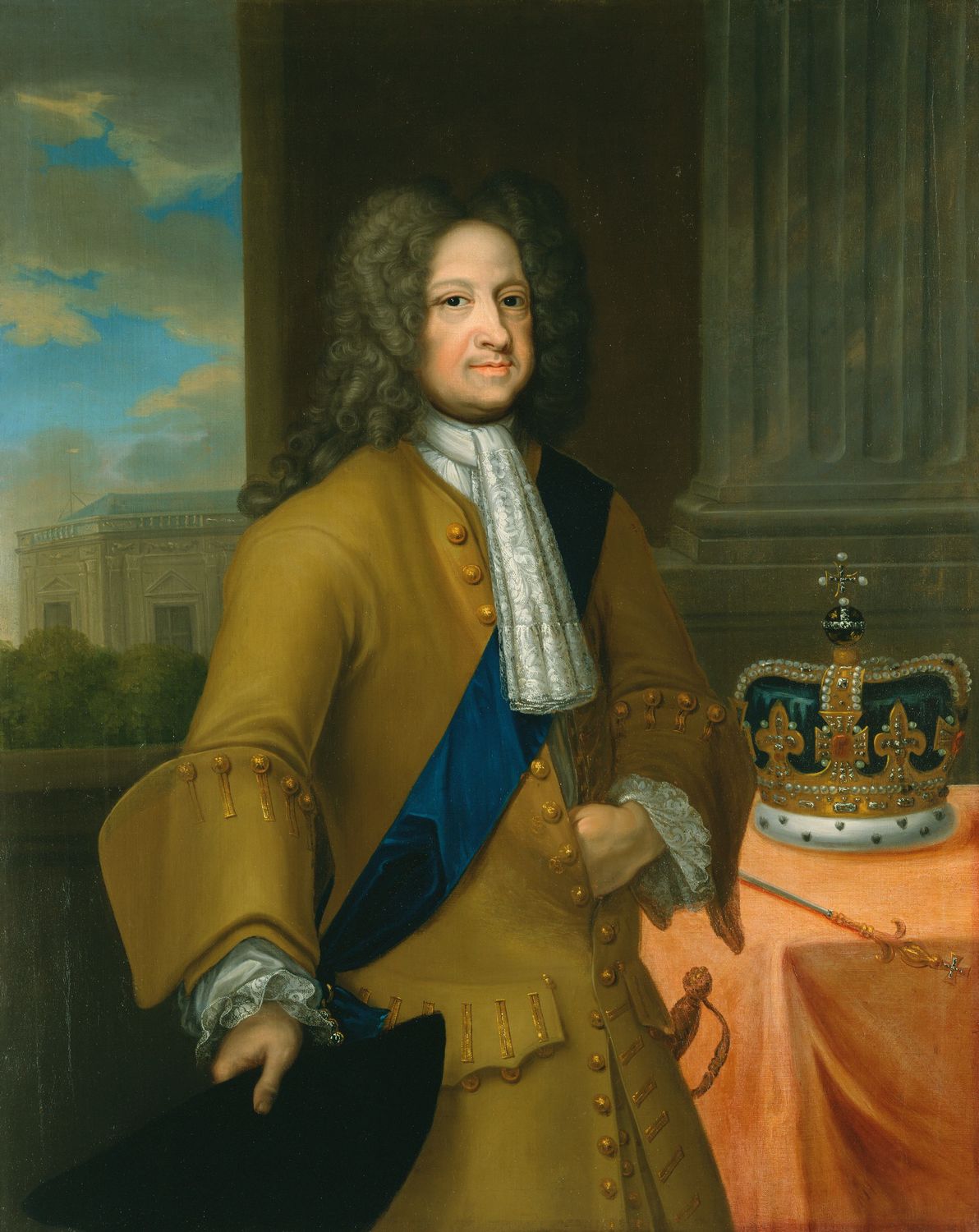 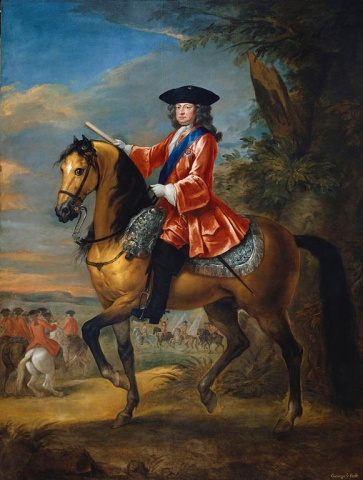 Posted by David Bridgwater at 02:10