The Roubiliac Statue of William Shakespeare for David Garrick

The Marble Statue of William Shakespeare
Made for David Garrick's Villa at Hampton
and its modellos
By Louis Francois Roubiliac. 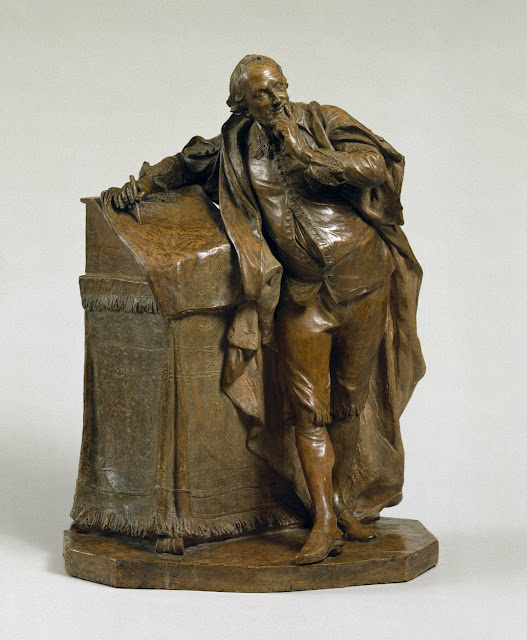 National Portrait Gallery.
If the date was added later, this may be the 'half length of Mr Roubiliac' ex­hibited by Carpentiers at the Society of Artists 1761. Roubiliac died 11th January 1762, and the quality of this portrait suggests that is unlikely to be a copy. This portrait shows the terracotta dated 1757, now in the Folger Shakespeare Library (above). Another terracotta of this statue of Shakespeare
commissioned by Garrick, now in the Victoria and Albert Museum (see below), is dated 1757; the marble passed on the death of Mrs Garrick to the British Museum.
'A version of this portrait without a date or signature, was owned in 1931 by Kenneth Sanderson, and is apparently the source of the mezzotint by D. Martin engraved 1765 (see below) when in the possession of R. Alexander of Edinburgh. Both show a large pair of callipers on the stand in addition to the two small tools shown in the above portrait. A number of scholars have taken this to be a repetition.' text lifted from NPG website  Where is it now?
see - http://www.npg.org.uk/collections/explore/by-publication/kerslake/early-georgian-portraits-catalogue-roubiliac.php 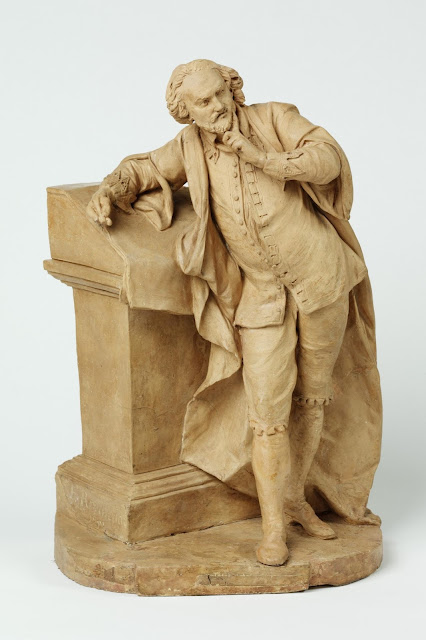 Terracotta Statuette
Signed on the base LF Roubiliac, 1757.
Height 422 mm.
A slightly earlier sketch version of the Folger statuette and the finished marble.


The waistcoat is shown slightly differently revealing less of a paunch, The plinth of the desk has no drapery and the index finger is in a different position..
Victoria and Albert Museum.
This terracotta was not included in the Roubiliac posthumous sale of 1762.
At the sale of the property of Edward Stevens (architect), held on 7 February 1776, lot 38 is described as 'A terracotta figure of Mr Roubiliac's Shakespeare'.
Noted on departmental records at the V and A, as having been purchased by Mr. A. Myers from the Henry Farrer Esq, F.S.A. sale (held at Christie's between 12 and 18 June 1866). Sold on the second day's sale, 13 June 1866, as lot 218, described as 'Shakespeare, by Corbett: a copy of the statue by Roubillac [sic]'.
The annotated sale catalogue is held in the National Art Library and records that it was purchased by Myers' for £2. Lots 221 and 222 in the same sale, described as models for a tomb in Westminster Abbey, were also purchased by Myers for 10s each.
The Shakespeare statuette was purchased by the Museum from Mr Myers in 1867, lot  for £4 4s. A terracotta model by Rysbrack for the Locke monument was also purchased from Myers at this time.
see - http://collections.vam.ac.uk/item/O111038/william-shakespeare-sketch-model-roubiliac-louis-francois/

The Life Size Marble Statue of William Shakespeare
1758.
Commissioned by David Garrick's and Carved for his Garden Temple at  his villa at Hampton, Middlesex.
Height 172 cms x Max Width 130 cms depth 70 cms.
Pedestal Height 130 cms x width 130 cms x 116 cms.
by Louis Francois Roubiliac.
signed on the left of the stand on the drapery LF Roubiliac inv.t et sc.t / MDCCCLLVIII.
Painted in gold on the pedestal - MARBLE STATUE OF WILLIAM SHAKESPEARE / By LF ROUBILIAC, SIGNED AND DATED 1758 / Formerly in the temple of Shakespeare / in the Garden of Garrick's Villa at Hampton / Bequeathed by David Garrick 1779 and installed at the British Museum after the death of his wife in 1822. It had finally been erected on its pedestal by 30th September 1823. There appears to have been some wrangling over the pedestal.
Transferred to the British Library in 2005.
From the British Museum.

The statue is made from several pieces of marble the head appears to be attached just above the collar, the left hand is let into the arm. the extended left forefinger is separately attached to the hand - this may be a restoration.

There were various lots in the Roubiliac sale of 1762 which may relate to the statue.
Little is known about the commissioning of this sculpture - there is a copy of memorandum of 3 July 1757 in Hereford Museum (original which was sent to the BM has now been lost) between Roubiliac and Garrick signed by the sculptor and witnessed by John Peele where the sculptor agrees to make the sculpture according to the 'settled model'.
A cash payment in the sculptors ledger of the 17 Fen 1759 for £300, probably refers to payment for the statue and pedestal - Roubiliac's bank account with Drummond's Bank, now in the archive of the Royal Bank of Scotland DR/ 427/39 f.423.
______________________________________
There is a description by Mrs Hampden Pye in A Short Account of Principal seats and Gardens in and about Twickenham was published in 1760.
'..... the garden is laid out in the modern taste with a passage like my Lord Radnors cut under the road to a lawn, where close by the waterside, stands the Temple of Shakespeare. This is a brick building in the form of a dome, with a handsome porch supported by four pillars, Opposite to the entrance in a large nich stands a statue of the poet large as life at his desk in an attitude of thought. The figure is bold & striking, the drapery finished in a most delicate manner. The sculptor has displayed as many nice and masterly strokes in the statue of Shakespeare as the possessor has, in that poets most favourite characters'.

The French travel writer PJ Grosley wrote in Londres, 1770, pp 346 - 8, translated in a rather florid English version by Thomas Nugent in 1772.

'One of the most remarkable monuments of this kind is that, which the celebrated Mr Garrick lately erected to the memory of Shakespeare, at Hampton. Upon a small eminence formed by art, which commands a prospect of the banks of the Thames, and is separated from the garden by a long row of Laurels and ever greens,  rises a little temple built with as much solidity as taste, of Portland stone. It is of a round form , terminated by a cupola, the diameter twenty one feet: the door is adorned with a front, which juts out , and is supported in the antique manner, by two pillars. The temple is decorated with a statue of Shakespeare, as large as the life executed by Roubilliac (sic) in fine Carrara marble. The father of English tragedy is represented with a pen in his hand, seeming to have just conceived one of those sublime ideas, to which he owes his reputation. This statue which is in itself very fine, and rendered still more so by the intention of him who caused it to be erected, is the only ornament within the temple, the place where Mr Garrick and his select friends assemble. The furniture consists only of a dozen chairs, made after the English fashion, one of which, higher and more adorned than the rest, is intended for the president.
Mr Garrick does the honours of this monument in a manner which inhances (sic) his merit in erecting it 'I owe everything says he to Shakespeare: si vivo et valio, suum est: this is but a weak testimony of gratitude which knows no bounds.
This celebrated person is said to have been appointed by an English nobleman guardian to his only son, By this choice and this monument of his gratitude to Shakespeare, Mr Garrick may vie with, those players of ancient Greece, who were not excluded by their profession, from places that required the greatest abilities and the strictest probity'.
___________________________________________
JT Smith suggests in A Book for a Rainy Day that a cast of the statue by George Garrard ARA  had replaced the marble when he visited in 1829, and Mrs Esdaile states that it was there until 1902.
____________________________________
A watercolour of 1845 by George Scharf of the Statues of Shakespeare and Joseph Banks by Chantrey and the Bust of Madame Boccage by Defernex in the entrance hall of Montagu House, the Old British Museum is shown below. 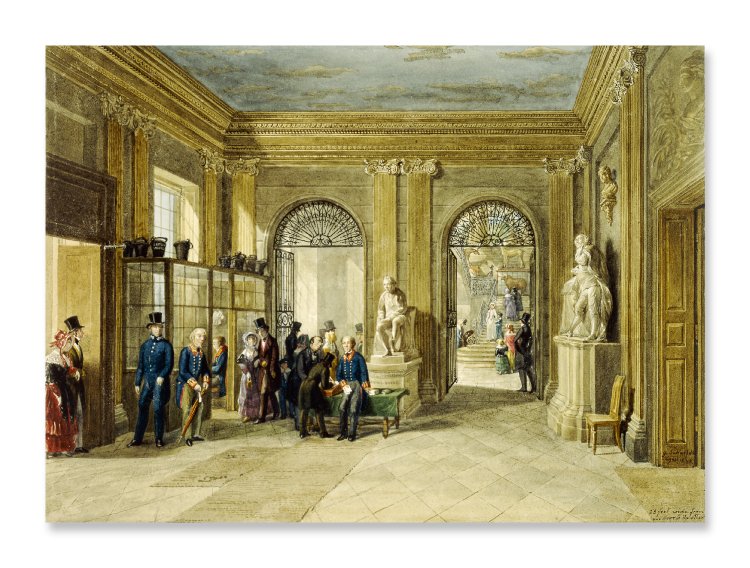 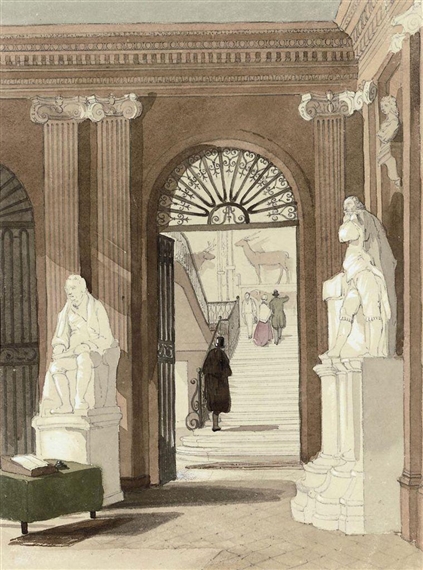 Another view of the entrance hall to Montagu House, the Old British Museum.
attrib. George Scharf  (1788 - 1860).
I wholeheartedly recommend the British Museum website and its collection of drawings and watercolours by George Scharf to anyone interested in the topography of London just before the advent of photography. The majority of these drawings have not yet been digitalised.
In my opinion the finest recorder of the streets of London and its inhabitants.
He worked in England from 1816 until his death. He lived in St Martin's Lane, Charing Cross and after its demolition in Francis St, Bloomsbury.
see - http://www.britishmuseum.org/research/collection_online/search.aspx?searchText=Scharf
see also the Scharf drawings in the British Library at their website.
http://www.bl.uk/onlinegallery/onlineex/topdrawings/a/largeimage86237.html 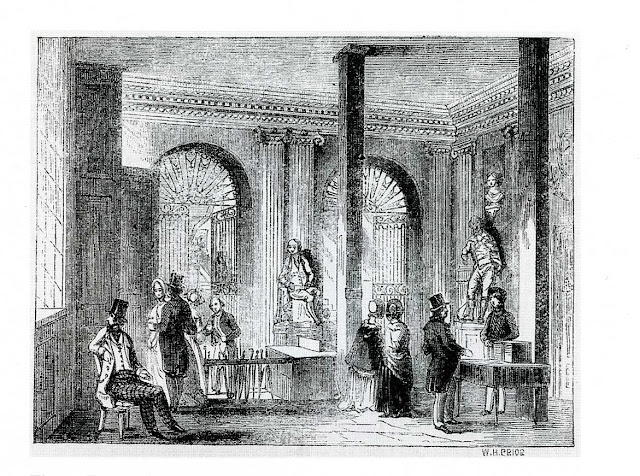 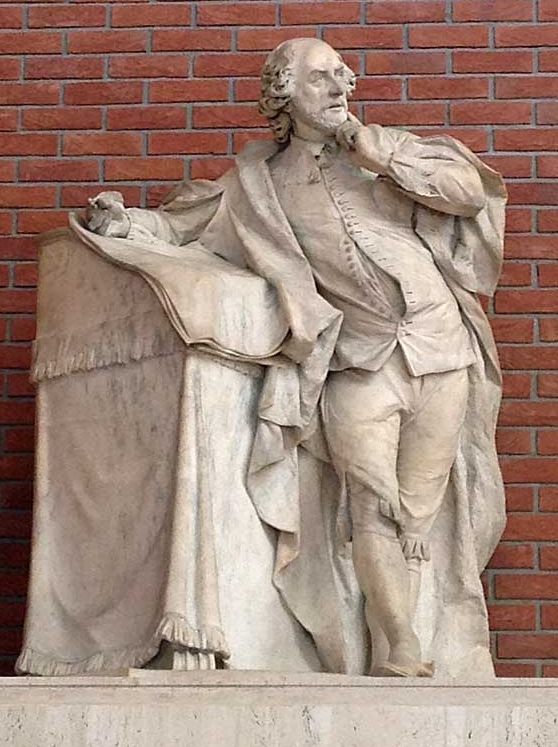 Low res photograph of The Roubiliac Statue of Shakespeare in the British Library. 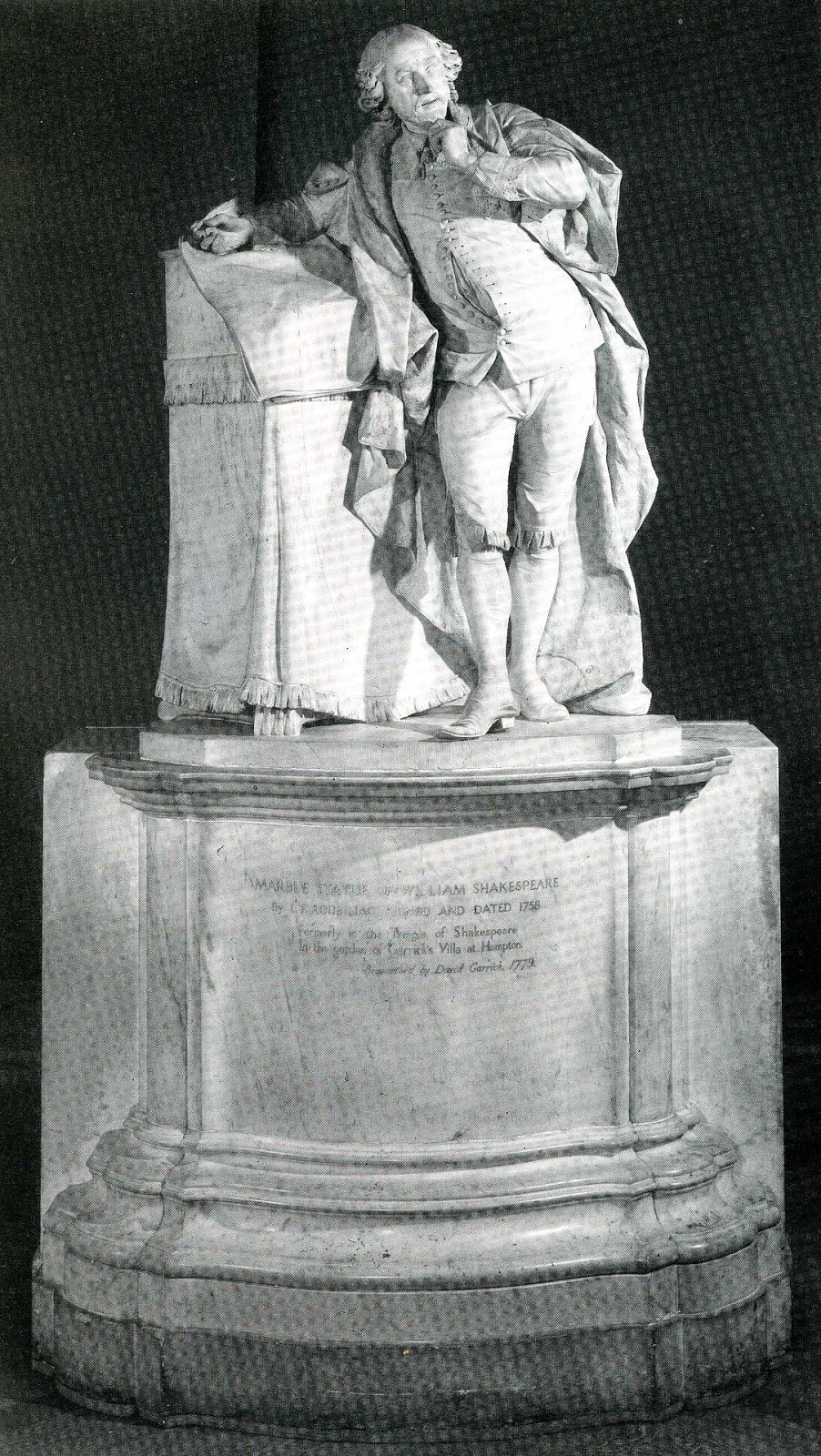 William Shakespeare
attrib. to Louis Francois Roubiliac.
Size Unknown.
This was apparently given to the anonymous owners grandfather by Warren Hastings.


This information, and the scanned photograph -
from Louis Francois Roubiliac, Katherine A. Esdaile, Oxford, 1928.
This marble is very close to the first terracotta model of the Garrick Shakespeare now in the V and A.
Showing the open waistcoat but with an undraped plinth.
Location currently unknown.
_______________________________ 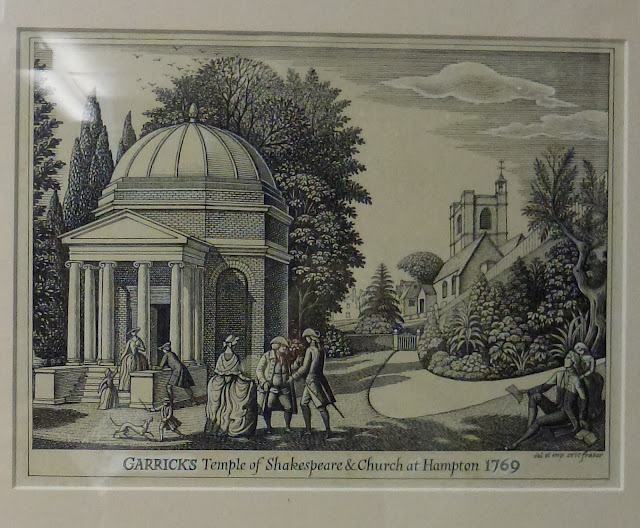 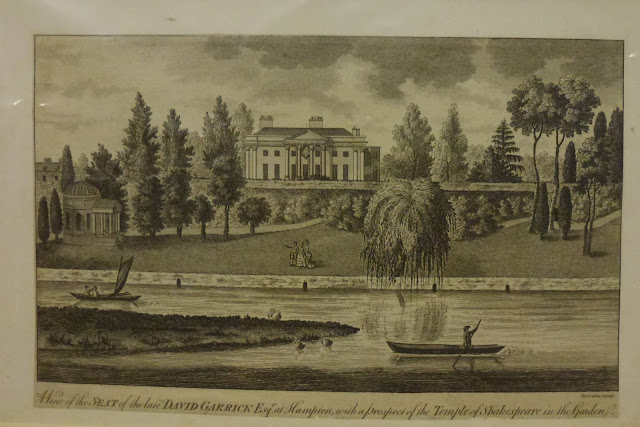 The Temple was linked to the villa by a tunnel under the road. 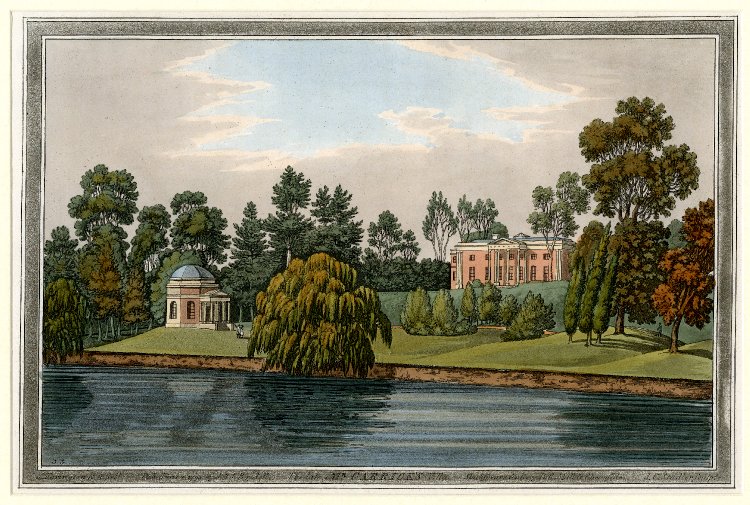 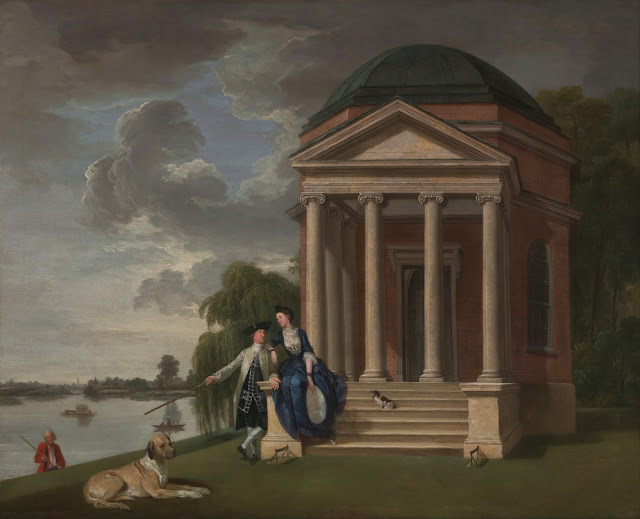 David Garrick and his wife on the steps of the temple at Hampton by Johan Zoffany.
Garrick Club. 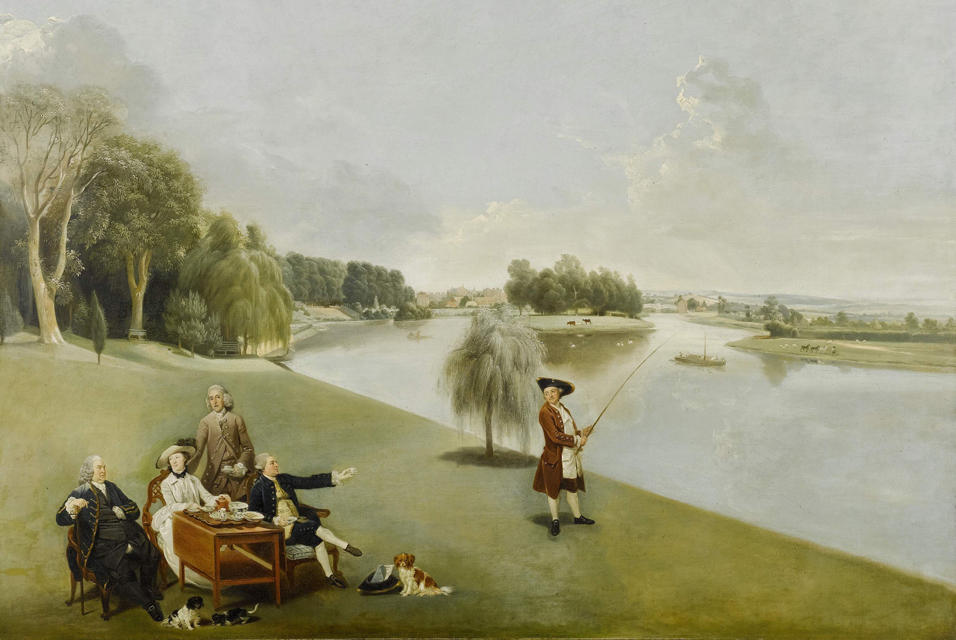 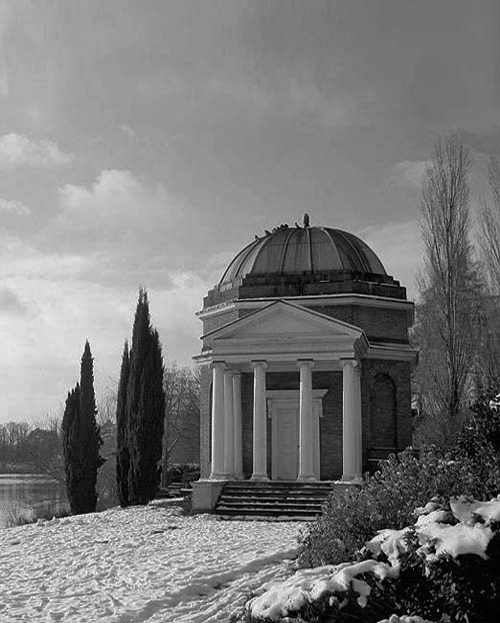 http://www.garrickstemple.org.uk/newsletters/newsletter%202012/index.html
Posted by David Bridgwater at 12:12