The Original Terracotta Statuette of Peter Paul Rubens
By Michael Rysbrack.
Signed on the supporting column,
Mich. Rysbrack. 1743.
24.4 ins - 622 mm tall.
Impressed on the back of the Column
D. PETRVS PAVLVS RVBBENS EQVERS
Private Collection.
I am very grateful to the owner for allowing me the privilege to visit his home and to photograph this wonderful statuette, which is to me, undoubtedly one of Michael Rysbrack's miniature masterpieces.
The quality and detail of the modelling is superb.
There is minor damage to the base, his right arm has been broken and glued back and his left foot is probably a replacement. There are signs that it was painted at one time - probably with some sort of whitewash and there are remains of it visible particularly in the hair. 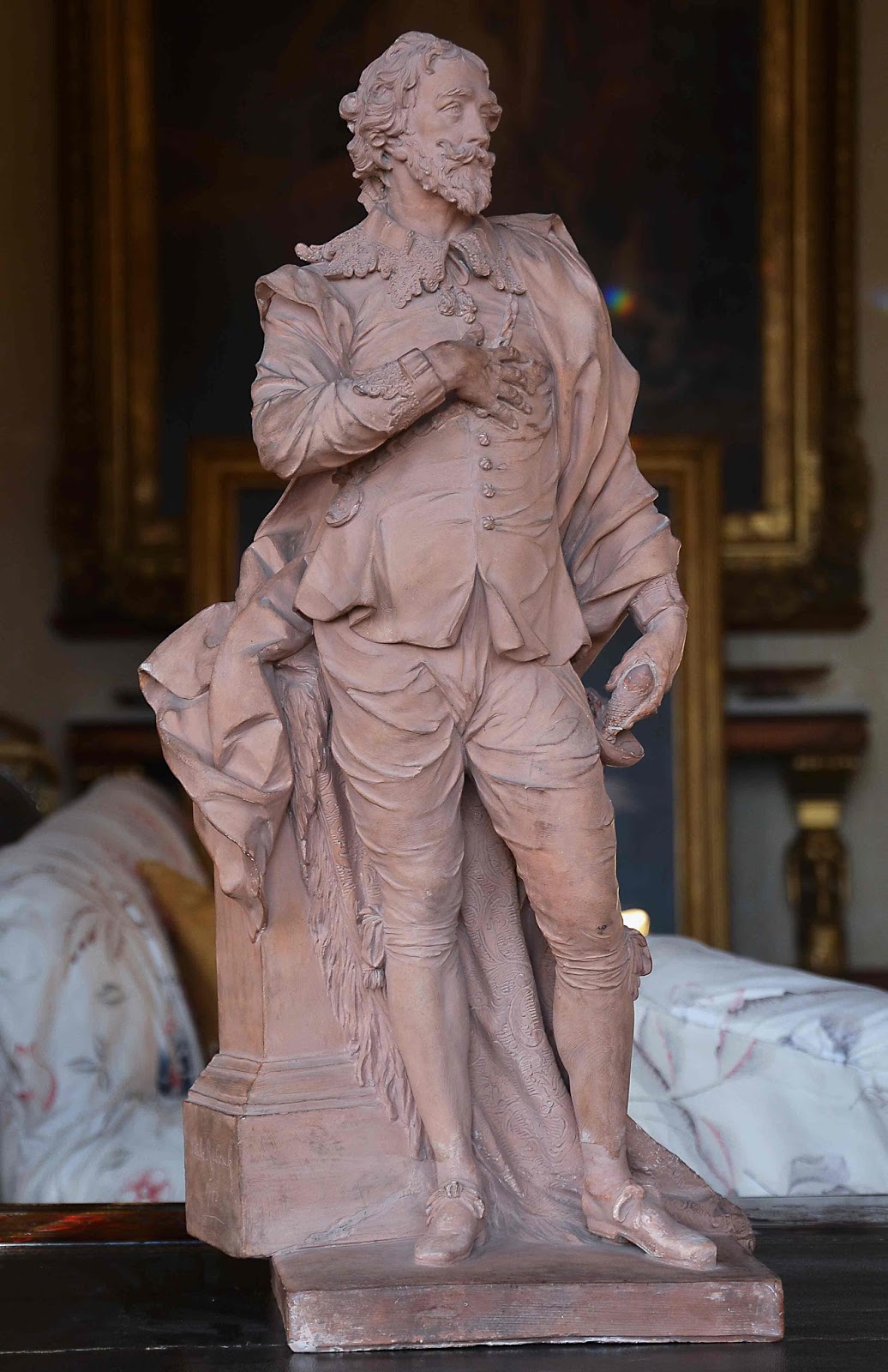 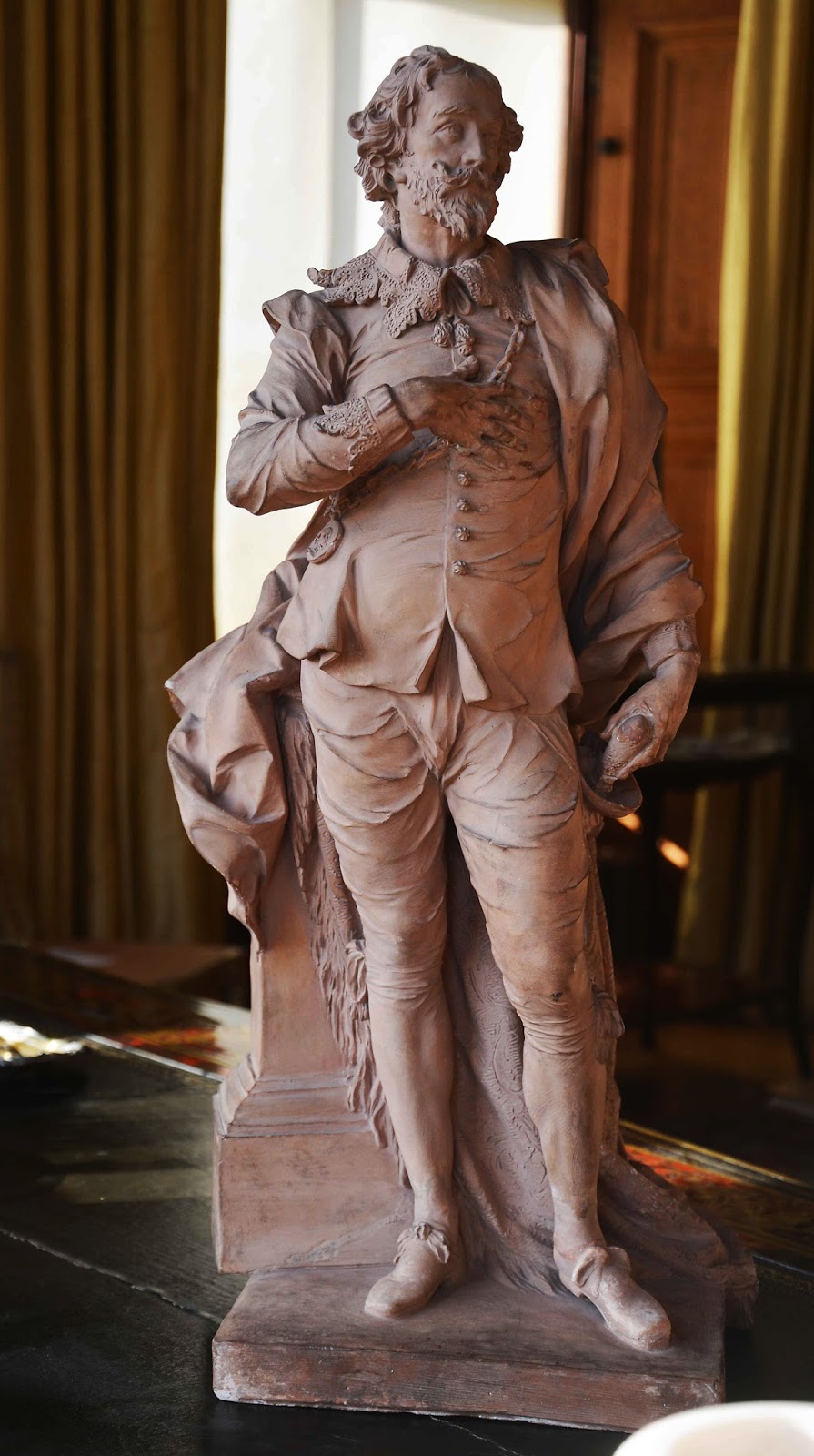 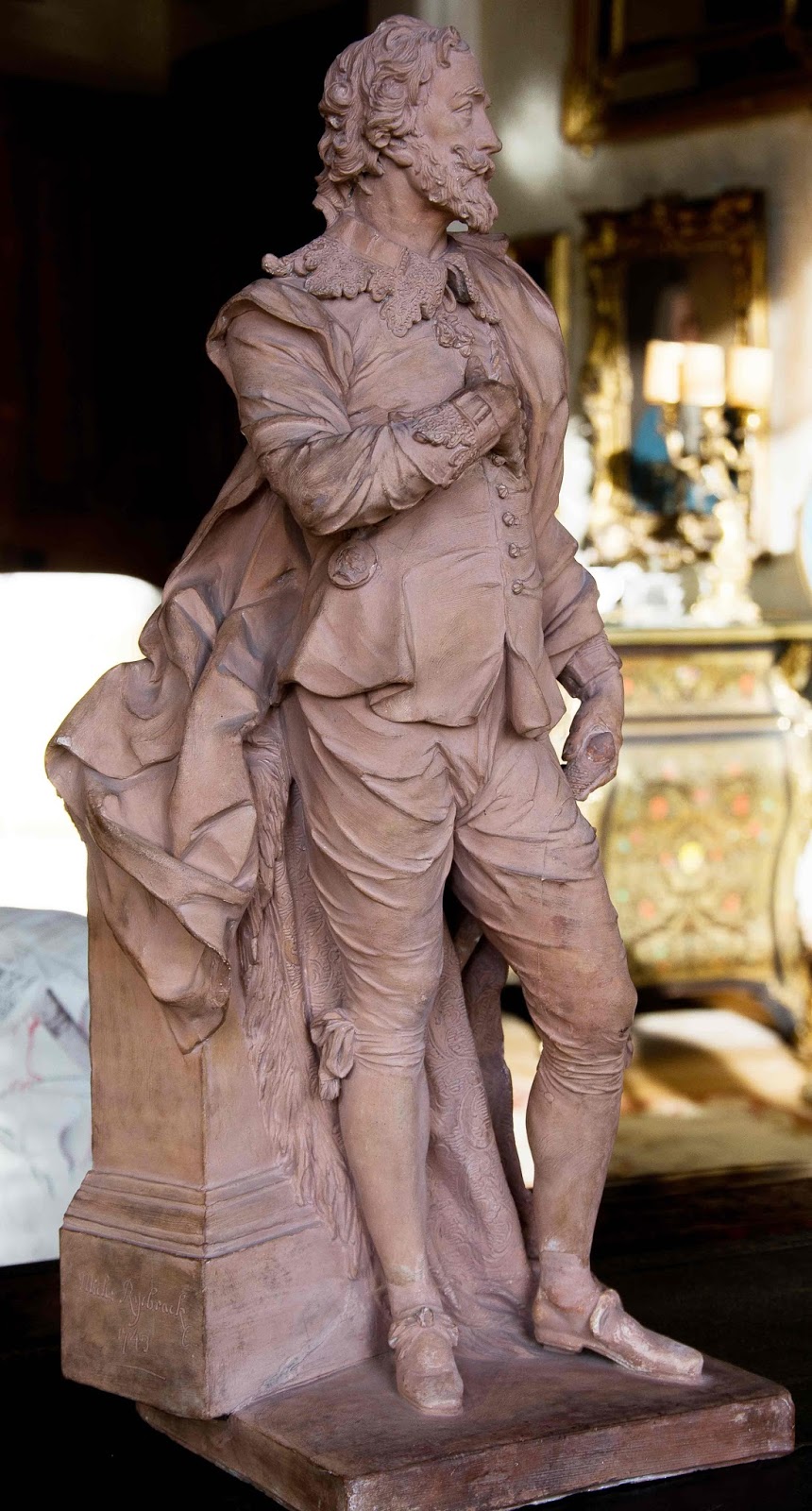 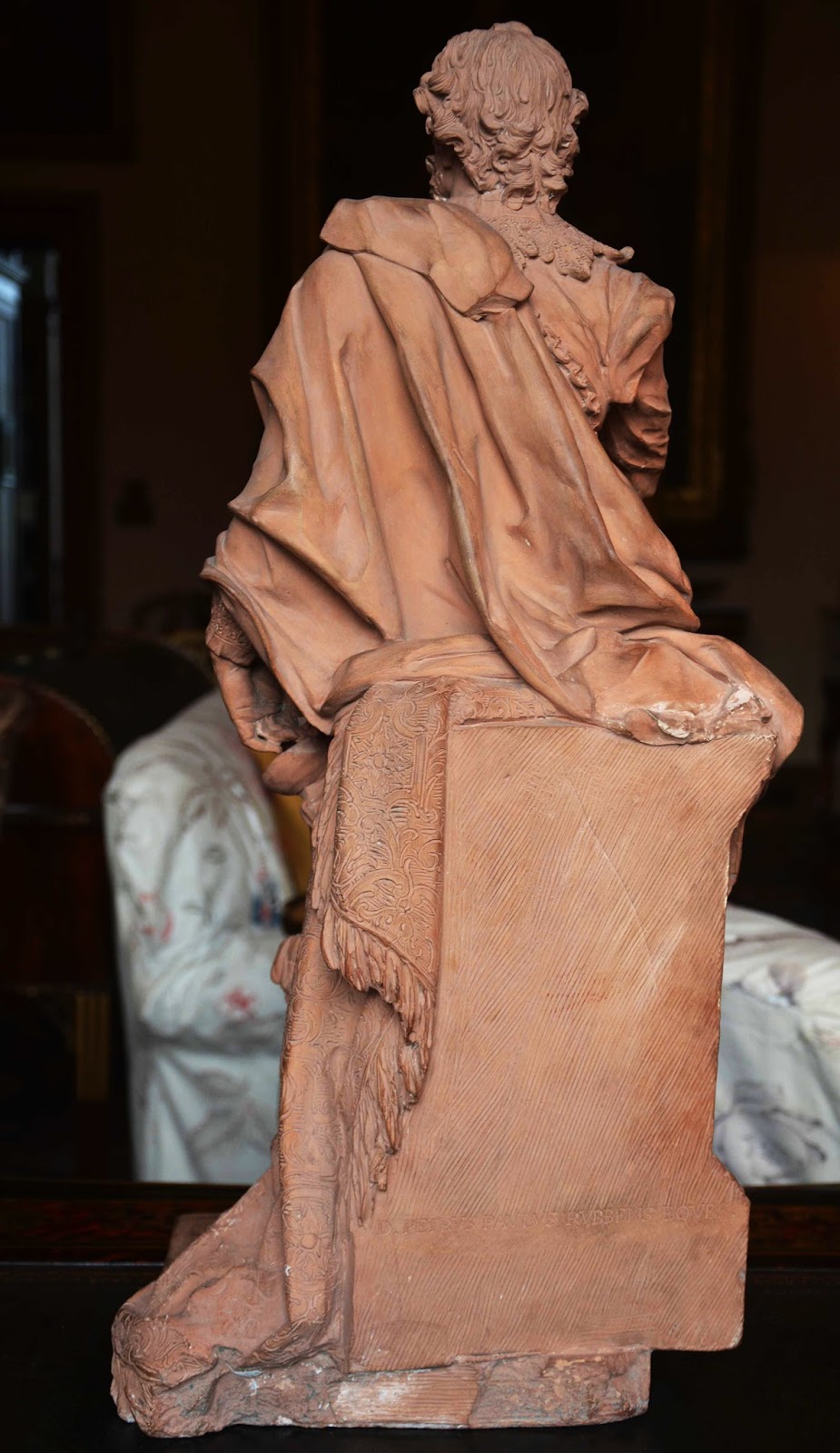 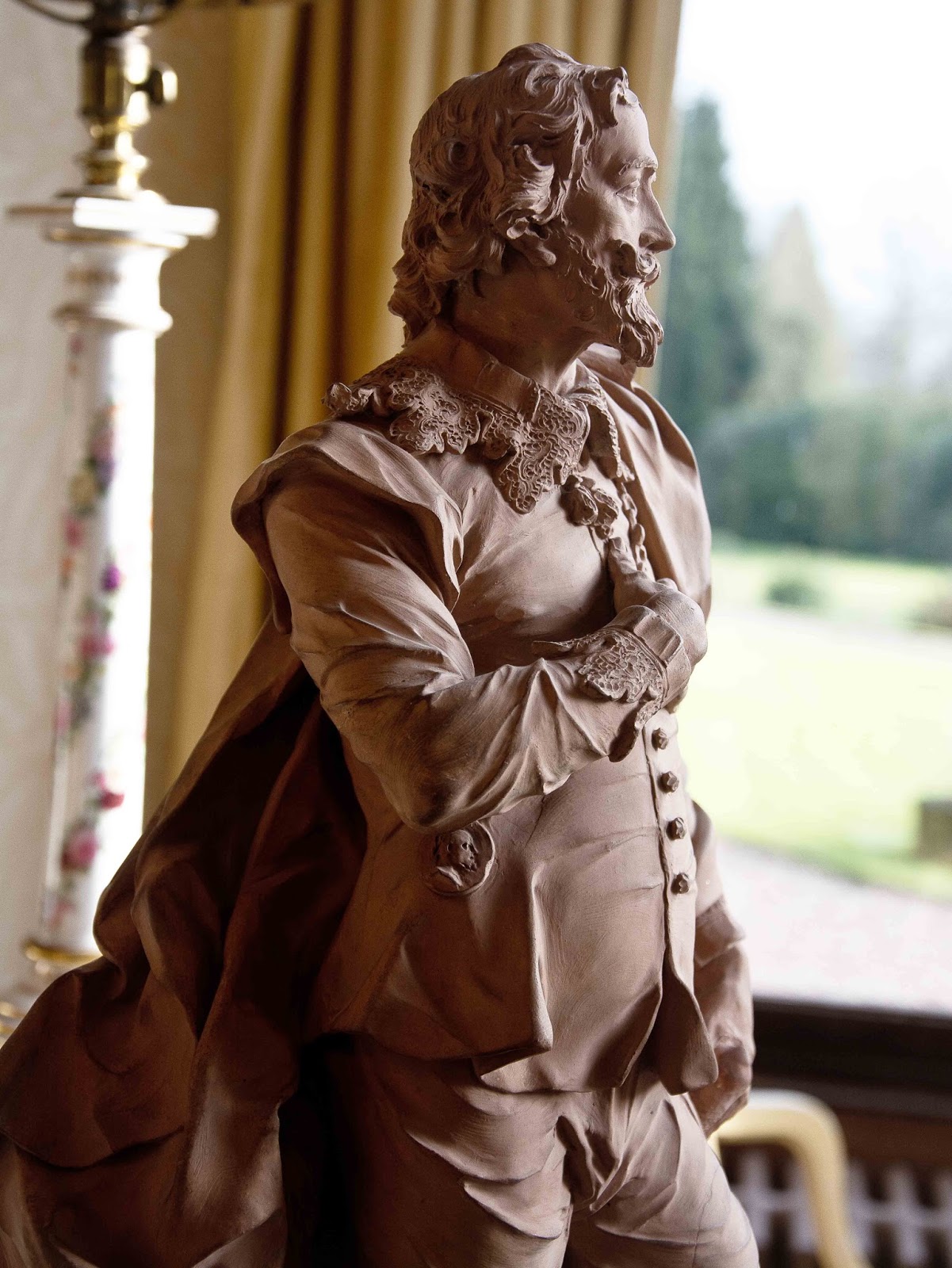 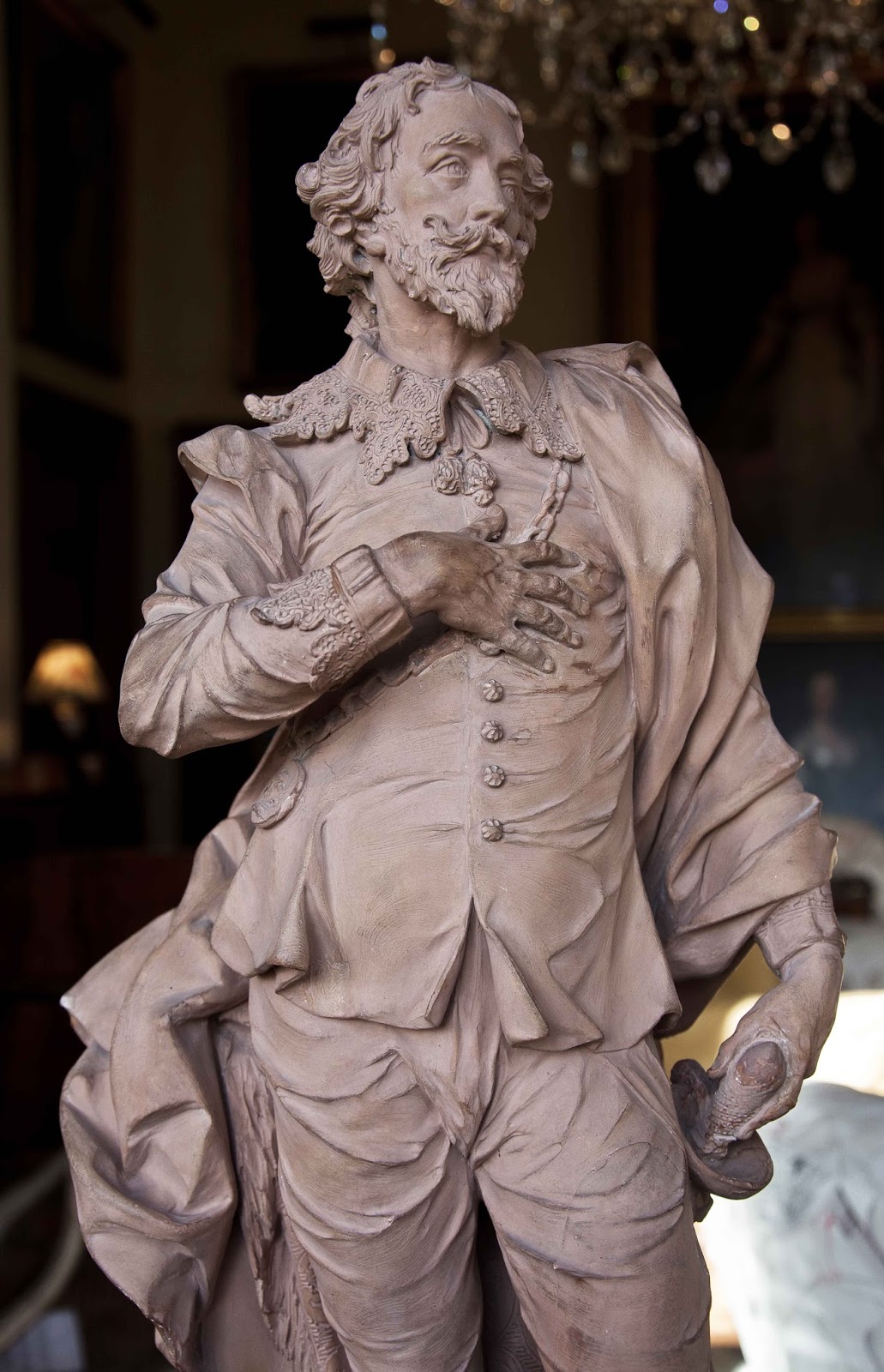 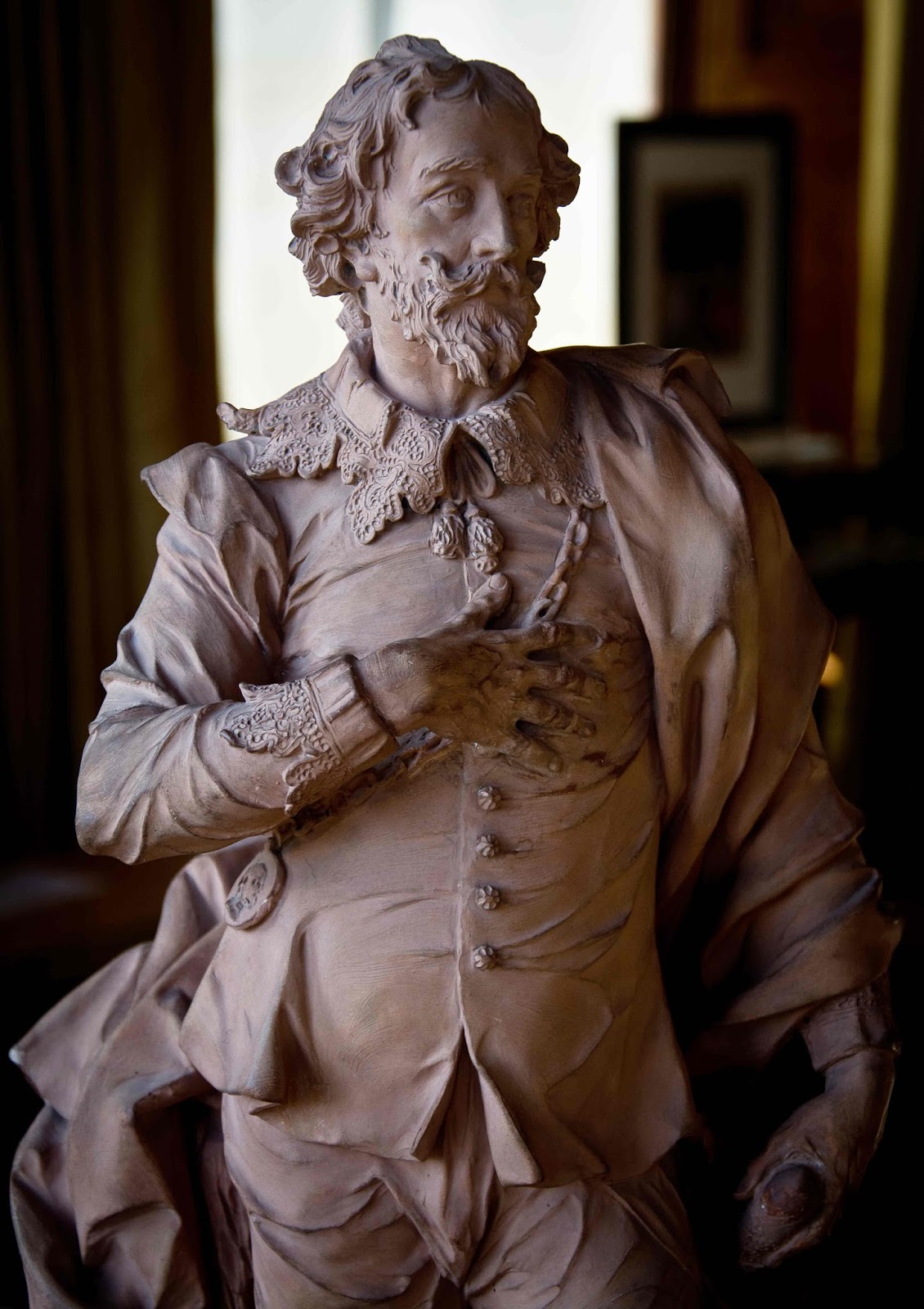 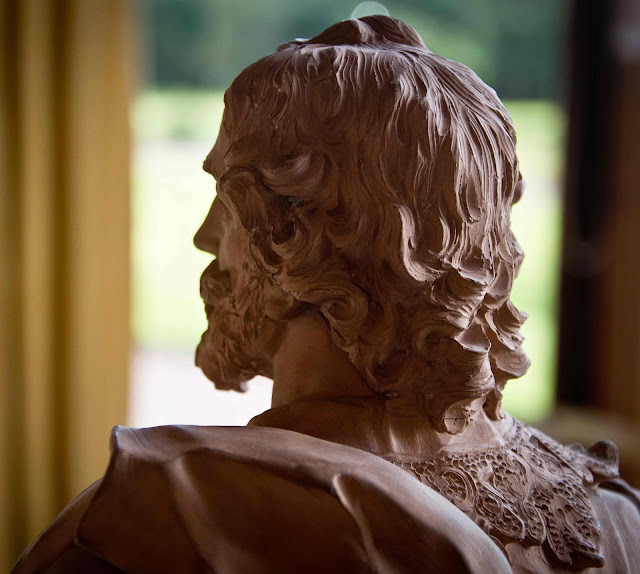 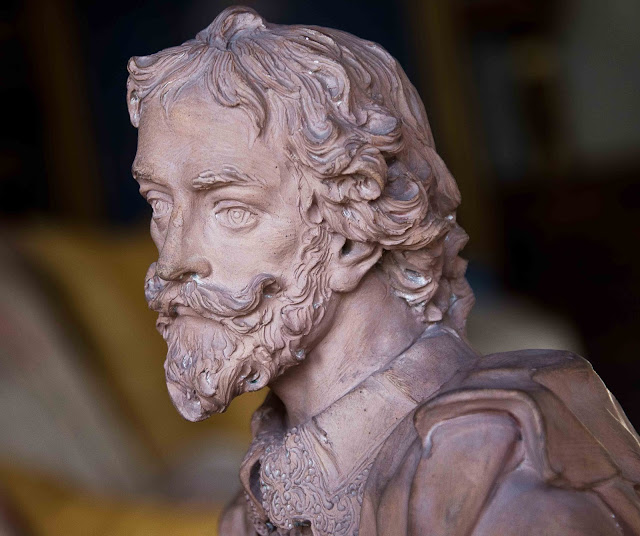 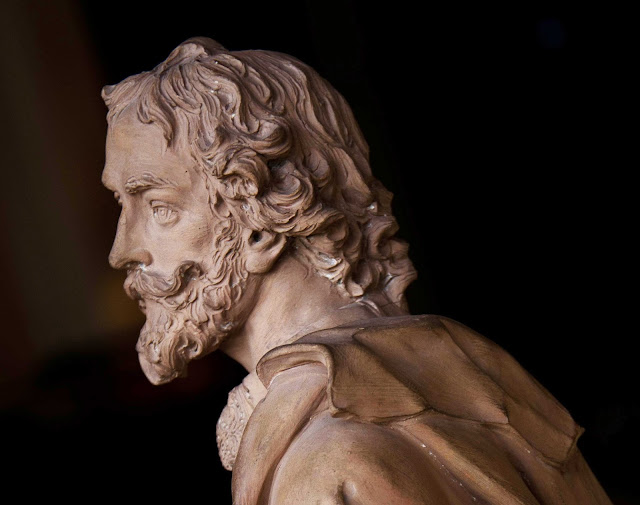 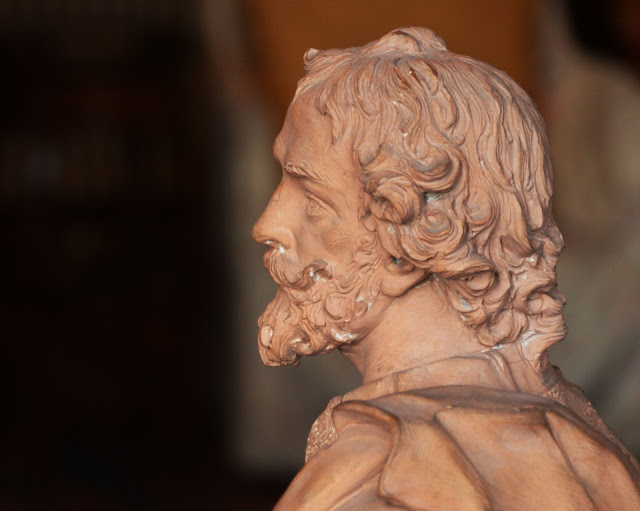 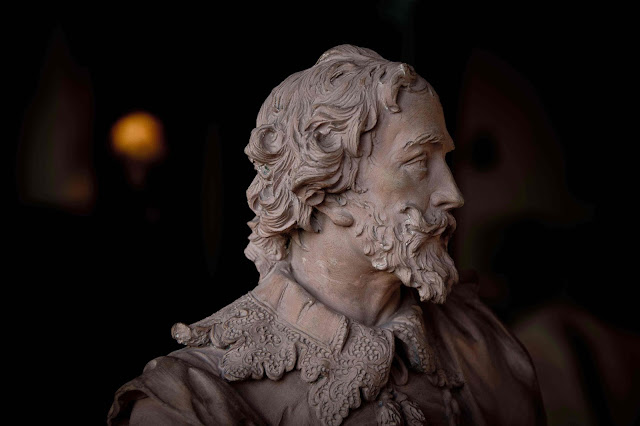 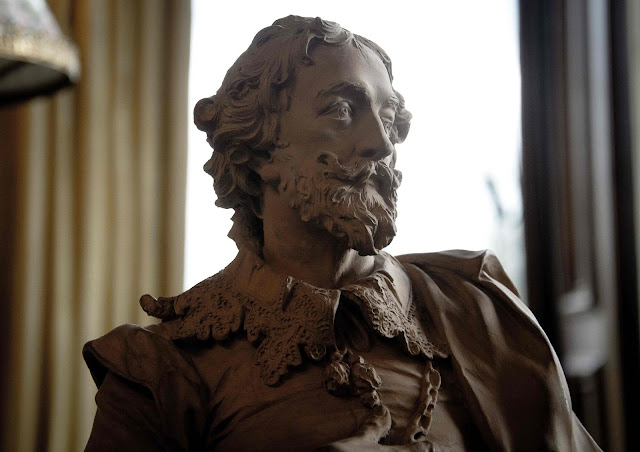 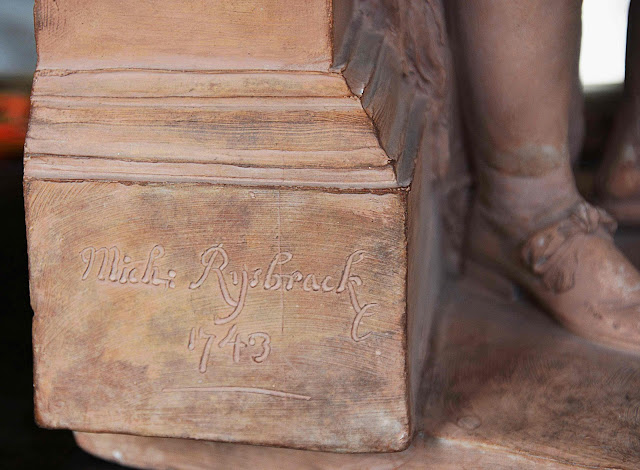 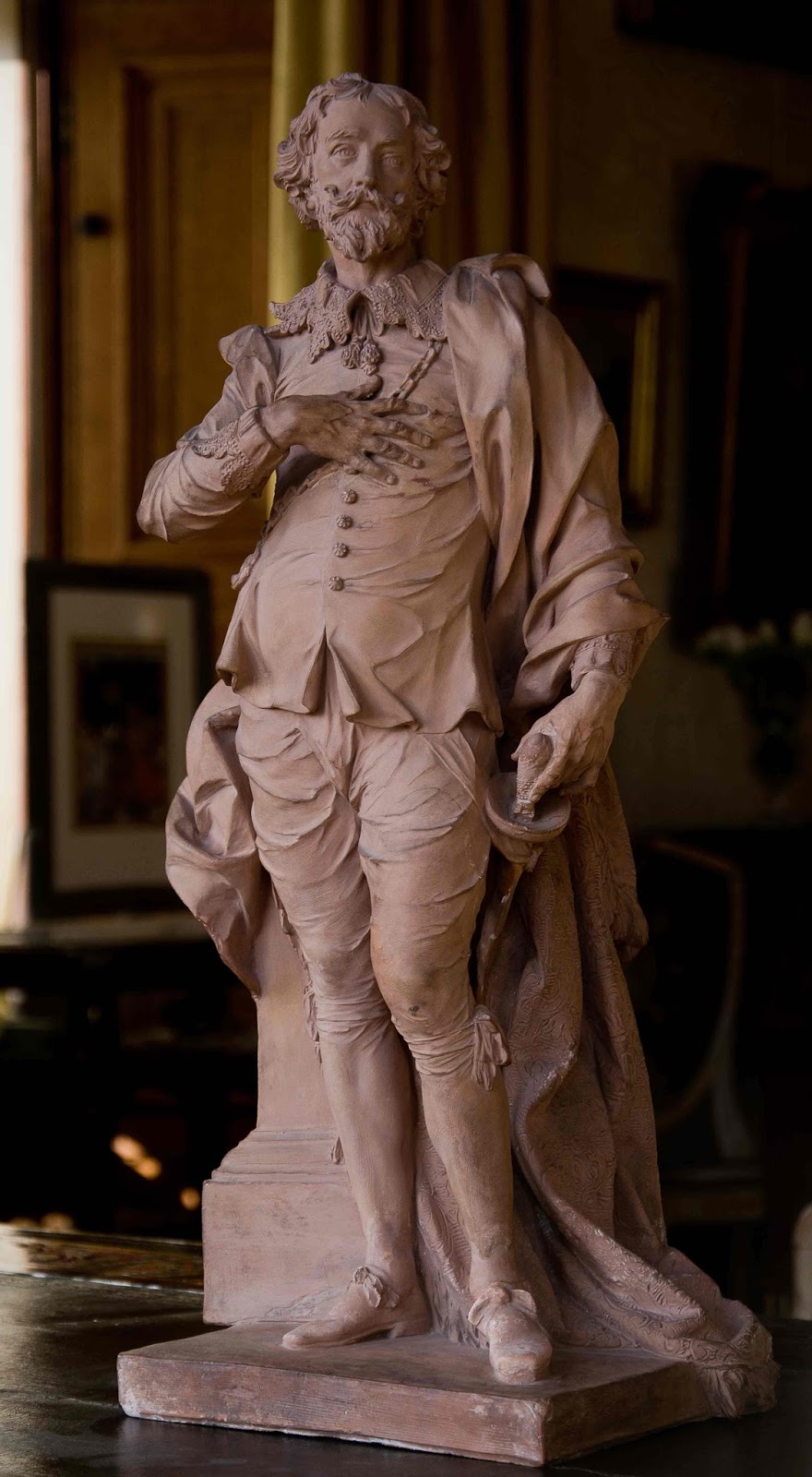 The announcement of the Publication of the Proposal to cast in plaster of Paris the three statuettes of Rubens, van Dyck and du Quesnoy from the original terracottas by Michael Rysbrack in the collection of Joseph van Haken was made in the Daily Advertiser on 19th December 1743. It appears again on Wednesday 4th January 1744.

Price to subscribers seven guineas and a half for the set. Three guineas to paid at the time of subscription the remaining four and a half guineas paid on the delivery of the set.
Subscriptions taken by Messrs Claessens and van der Hagen at Mr Rysbrack's at Vere St, near Oxford Chapel where the models could be seen, or at John Brindley's booksellers to his Royal Highness the Prince of Wales at New Bond Street.

It is clear from this that Josephvan Aken had a business relationship with Michael Rysbrack. Whilst the terracotta statuettes were clearly in his possession, the plaster reproductions were being sold from Rysbrack's business premises at Vere Street, Oxford Market. It is unclear who cast these statuettes but it is unlikely that they were made by Peter Vanina, who was first recorded working for Rysbrack after 1753. In 1758 when Sir Edward Littleton approached Michael Rysbrack for plaster copies of his own portrait bust, Rysbrack replied that making multiples was ‘a thing Entirely out of my way’, going on to say that he had consulted ‘Mr Vannini, the Caster in Plaster of Paris. (Whom I Employ when I want). Peter Vanina owned a pair of the statuettes of Rubens and van Dyck which were disposed of from his house in Dover Street in his 2nd sale of 3 July 1770 on the occasion of 'his going abroad', (Rupert Gunnis 1951).
George Vertue wrote in praise of the sculptures in 1743 Rysbrack had 'lately since made three models in clay, being the representation of 3 most excellent artists (about 2 foot hi each figure) Rubens van Dyke and Fiamingo Quenoy all three his countrymen These three models for the invention being standing the gracefulness of the Actions the dispositions of their habit, attitudes, and natural likeness, is most excellent. Q[uestion] if any other Artist living could do better and more masterly execute them.’

Vertue goes on to say that Rysbrack's popularity had been eclipsed by that of Peter Scheemakers, after the completion in 1740 of the latters monument to Shakespeare in Westminster Abbey and that he was feeling 'the effects in the line of Busines' there is no suggestion that there was any financial motive rather that he had time on his hands and that 'these (statuettes) are the effect of leisure and study'.


A brief look at the chronological lists in the Biographical Dictionary of Sculptors in Britain pub. 2009
would suggest there was some truth in Vertue's statement and that the early 1740's were a quiet time for Rysbrack - as keen collector of engravings and sculpture (like many collectors) he had a serious habit to feed although by this time he would have been fairly comfortably off he would still have had the expenses of the studio to keep up.
I think these statuettes should be seen as a partial response to Scheemakers full length statue of Shakespeare and a partial  acceptance by Rysbrack of changing fashions - by this time there is a movement away from the classicism of the Palladian to the more lightweight Rococo style exemplified by the statue of Shakespeare depicted in a slightly ludicrous van Dyck style costume.

For the entire catalogue of this sale over 15 nights from  Monday Feb 11th 1750, until Saturday 16th, the sale recommencing on Monday 18th until Saturday 23rd, and continued from Monday 24 until Wednesday 27th February 1750.

For our purposes the most instructive day of the sale was the first day - Monday 11th February 1750 when van Aken's collection of  77 pieces of sculpture were sold.

Under the heading - MODELS IN TERRA COTTA, CASTS IN PLAISTER, &c.
Posted by David Bridgwater at 09:37