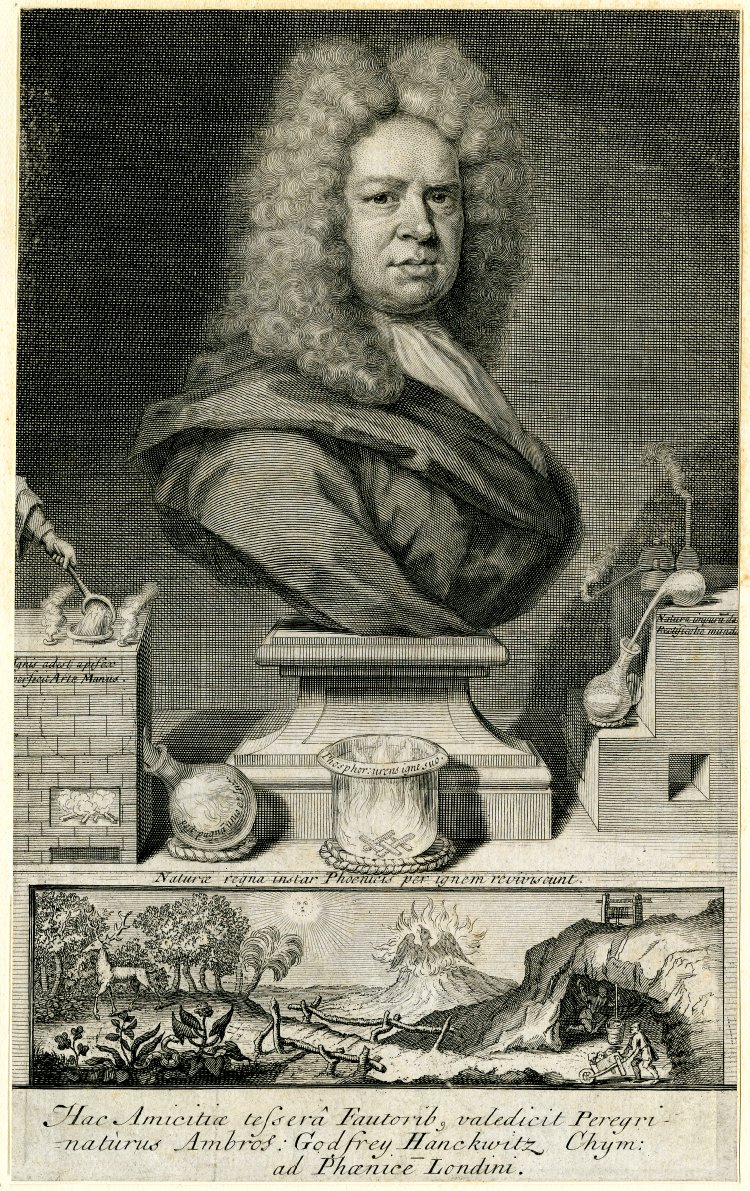 
Inscribed on the mount below "chemist; patented machine for extinguishing fired 'by explosion & suffocation' 1724. F.R.S. 1730. His laboratory was in Southampton St, London".

Phosphorus manufacturer and Apothecary born Nienberg in Saxony, came to London in 1679 and worked for Boyle in the attempt to manufacture Phosphorus. Johan Becher (the German alchemist who had recommended Godfrey as an assistant. In 1682 Boyle and Godfrey parted on good terms

His main employment was at Apothecaries Hall where in time he became master of the laboratory.


In 1707, Godfrey had made enough money to buy the lease to a new shop in Southampton Street where the Bedford House estate had stood. He opened a pharmacy, and he and his family lived above it.  Under the lease he could not carry on "obnoxious" trade there, but the narrow strip of land behind was unrestricted, so he built a workshop there, where he and his staff made phosphorus (from a secret ingredient - urine and faeces), and where he gave demonstrations of it.

Godfrey died on 15 January 1741 and his oldest son, Boyle Godfrey, took over the business. But Boyle dabbled in alchemy, wasted his inheritance, and had to live on a pension provided by his brothers Ambrose and John, who took over the business in 1742. Ambrose and John were also unsuccessful and in 1746 were declared bankrupt. The business passed to their nephew, Boyle's son, named Ambrose Godfrey after his grandfather. The younger Ambrose was successful, carrying on the business until his death in 1797, when it passed in turn to his son Ambrose Towers Godfrey, who formed a partnership with Charles Cooke. The firm Godfrey and Cooke survived until 1915. 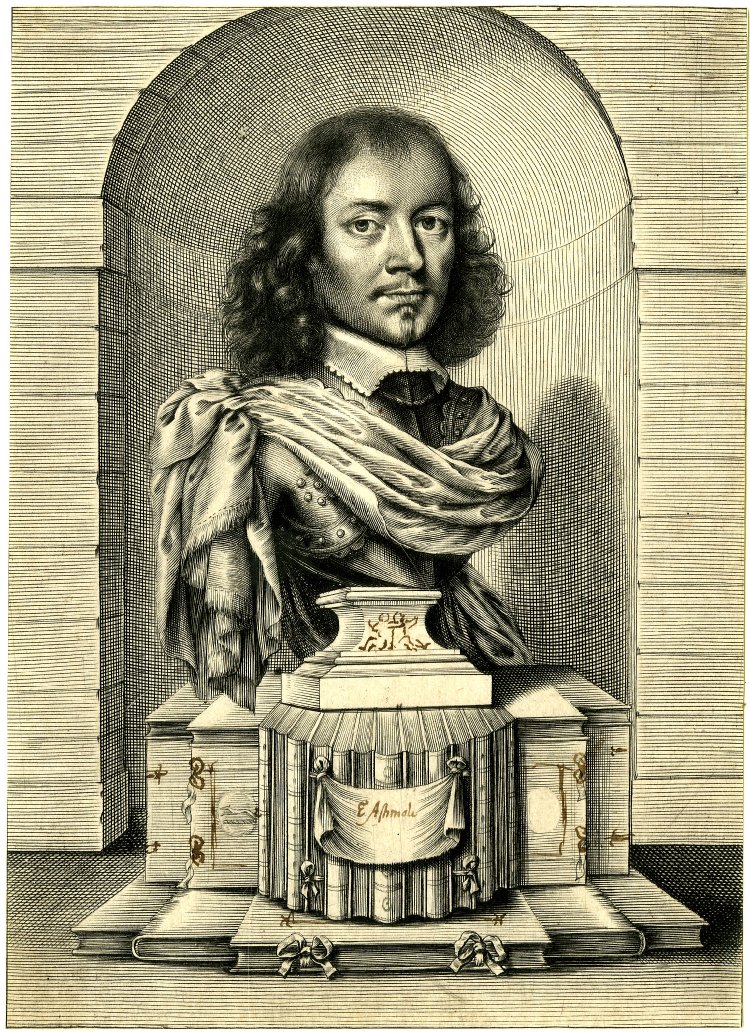 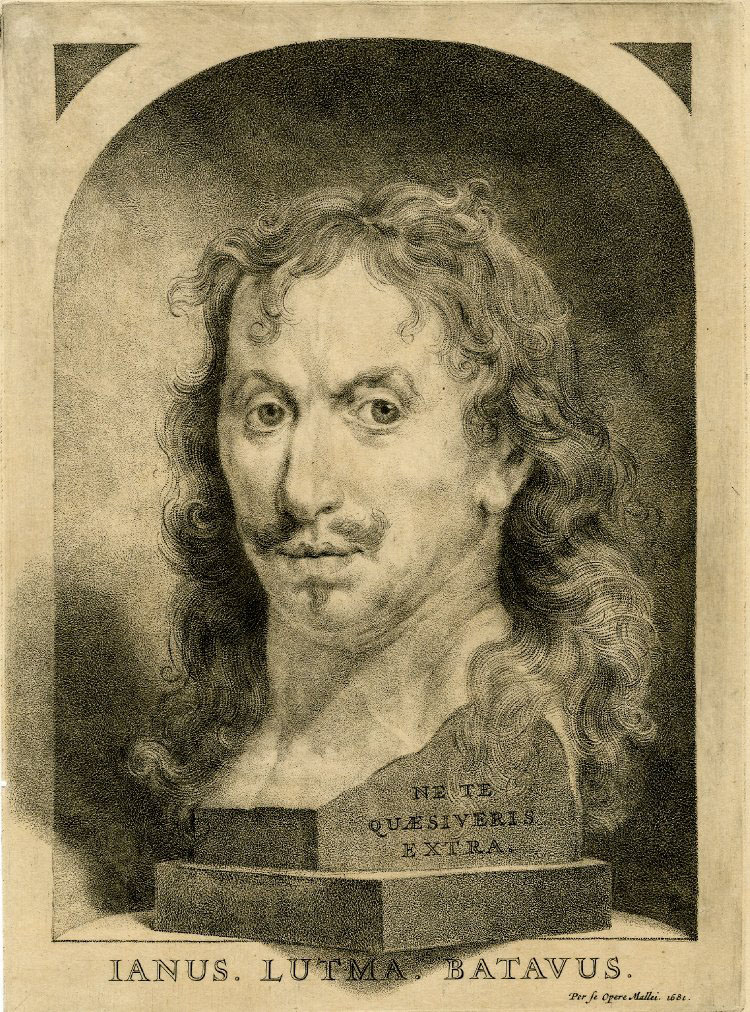 Jan Lutma the younger, self portrait, 1681 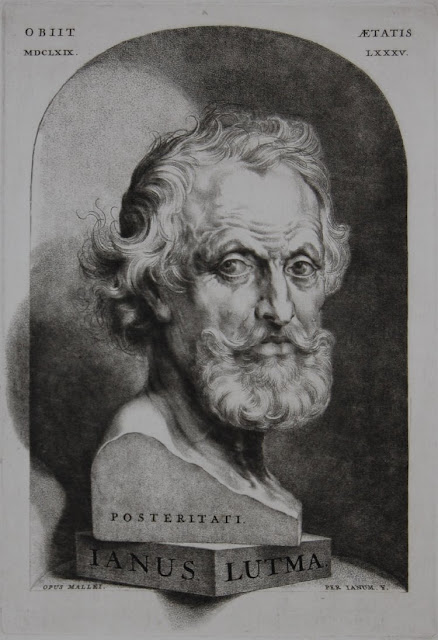 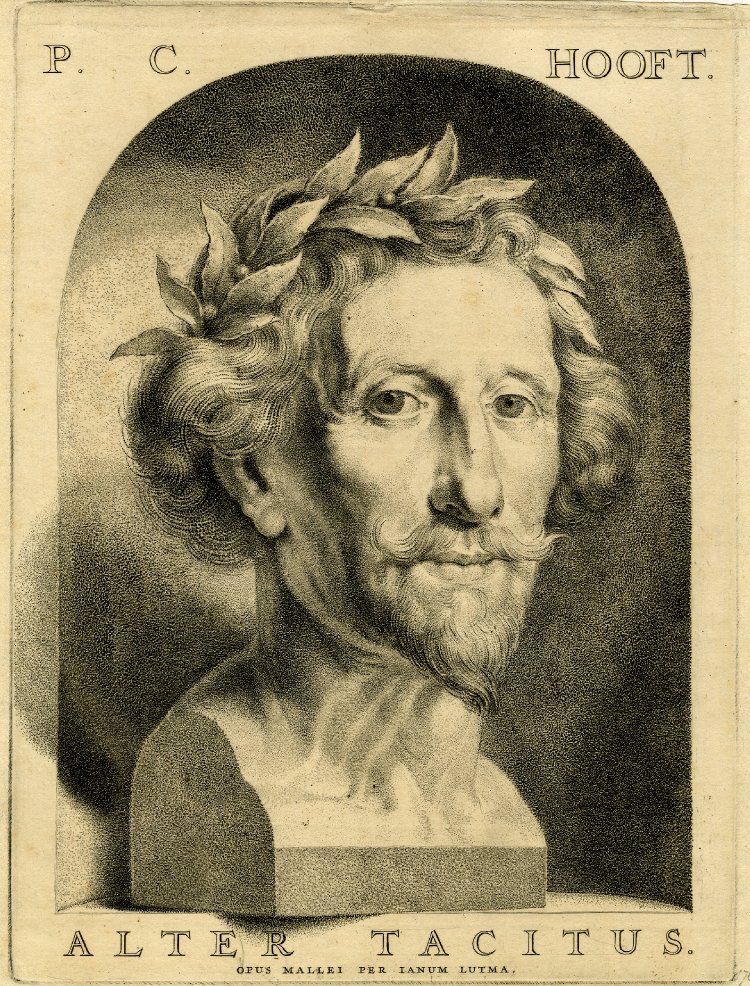 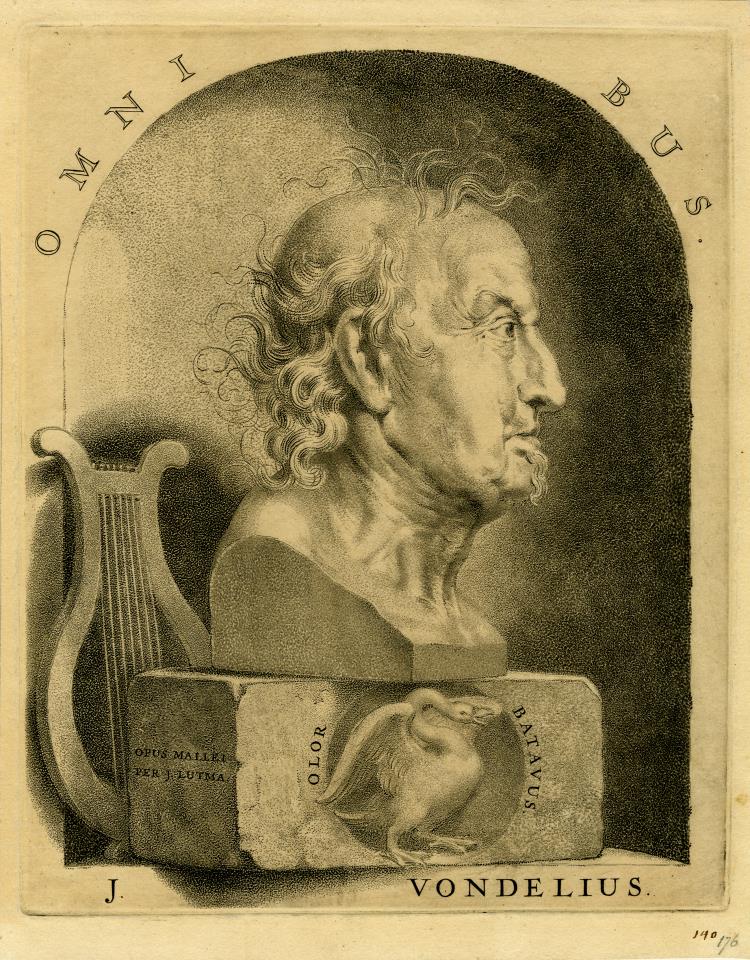 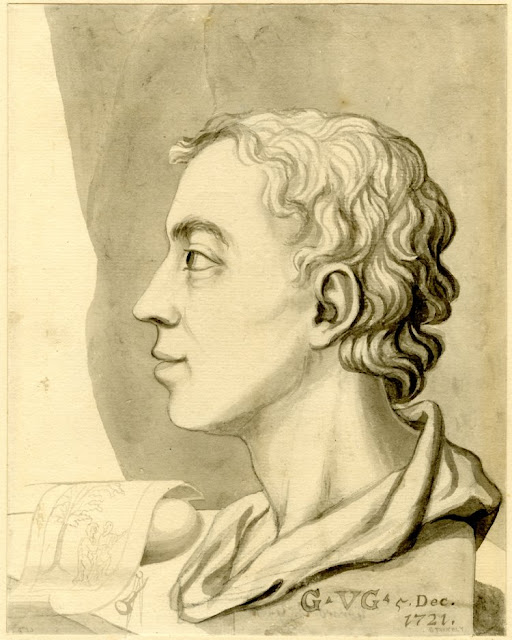 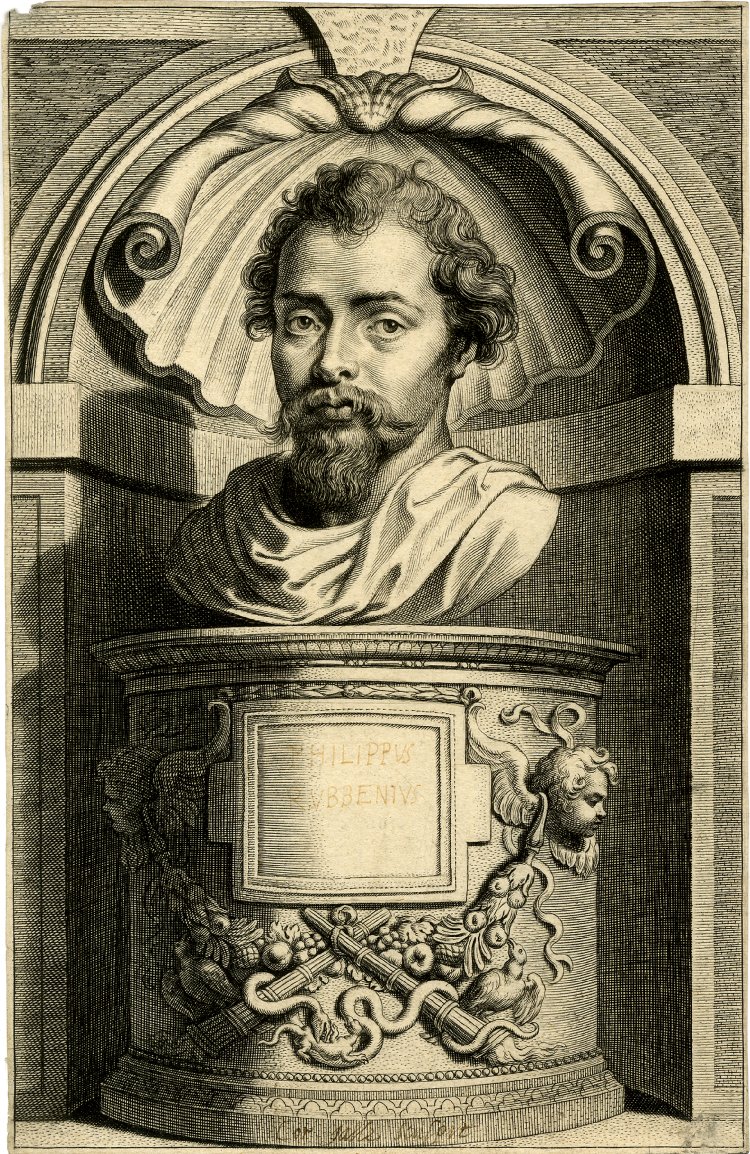 Frontispiece to The Sermons of St Asterius of Amasia. Antwerp, 1615. 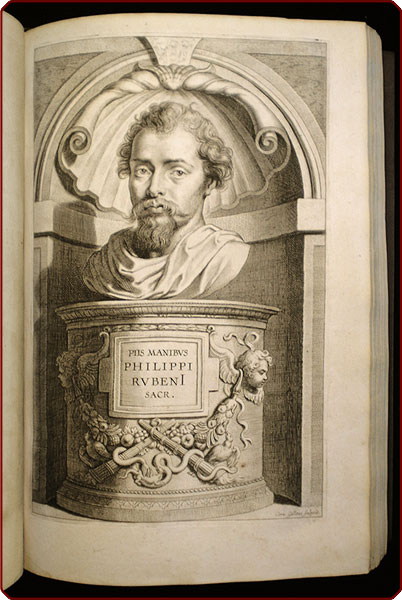 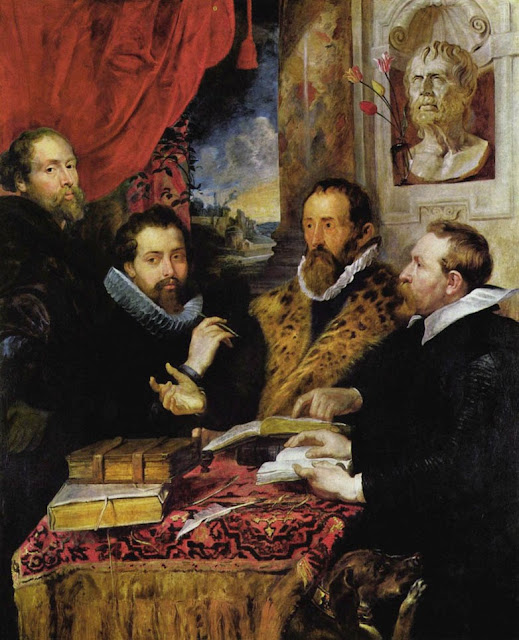 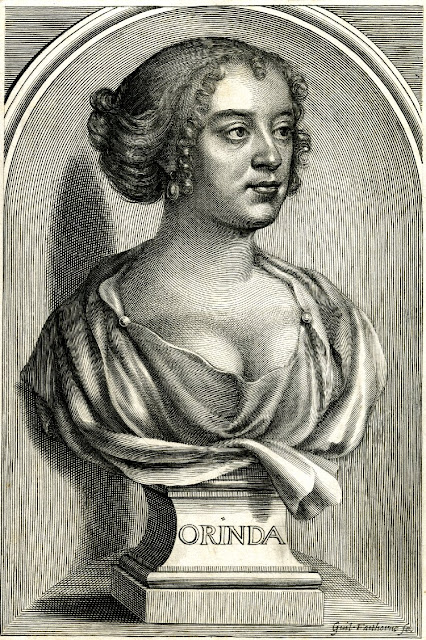 Frontispiece from  POEMS by the most deservedly admired MRS KATHERINE PHILIPS, the matchless ORINDA. To which is added Monsieur Corneilles POMPEY & HORACE tragedies, with several other translations out of French .
London, Printed by T. N for Henry Herringman, 1678.. . Katherine Philips (1632-1664) the noted female poet, is remembered chiefly today for her accounts in her poems of her friendships with women. Her version of Corneille's tragedy La Mort de Pompee was first published in her lifetime in 1663. This was followed by an unauthorised 8vo edition of her poems shortly before her premature death from smallpox in 1664. This was withdrawn a few days after it appeared as having been inaccurately printed. The authorised (in folio) edition was prepared for publication by Katherine's friend Sir Charles Cotterell, Charles II's Master of Ceremonies and included the tragedy Pompey and the previously unpublished Horace. This was first published in 1667 and was obviously popular as reprints appeared in 1669, 1678, and 1710, remarkable for a dead female poet of that period. The translations of French poems and one Italian poem run from page 170 to 198, pagination restarts for the Corneille tragedies. The bookplate bears the name Hans Sloane Esqr. most likely that of the great nephew of Sir Hans Sloane the famous natural history collector whose bequest of books and artifacts formed the foundation of the British Museum 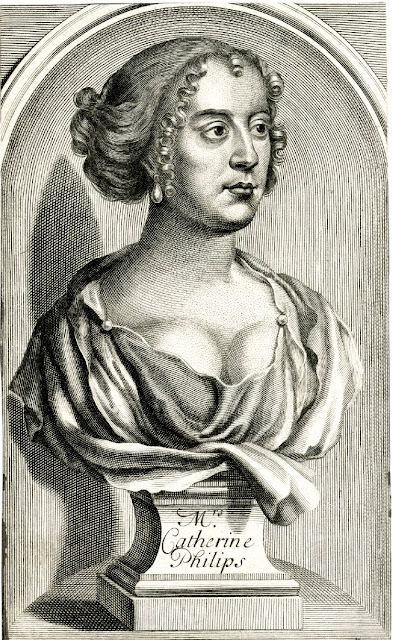 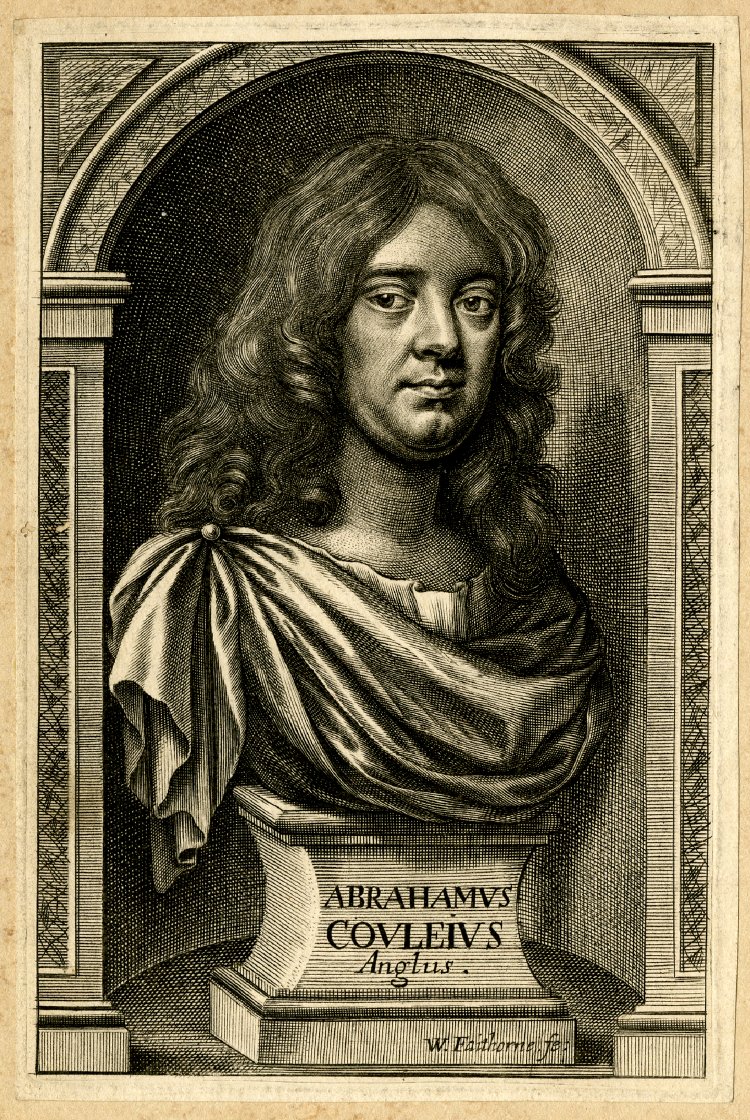 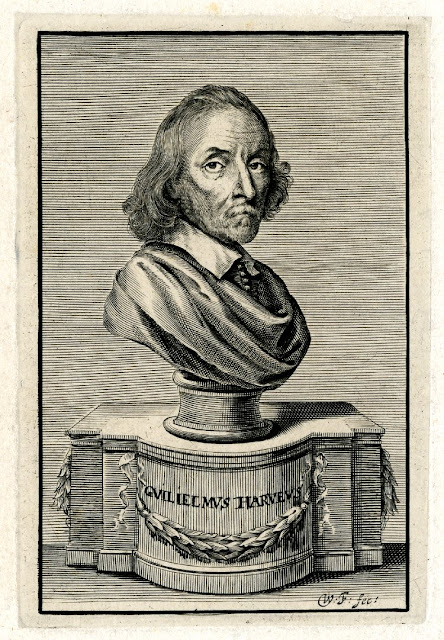 Dr Harvey discovered the principal of Circulation of Blood. 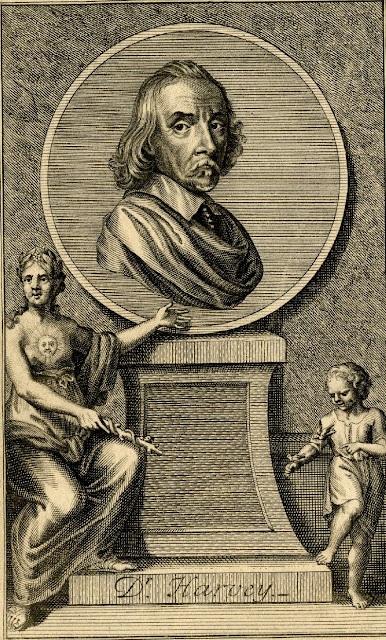 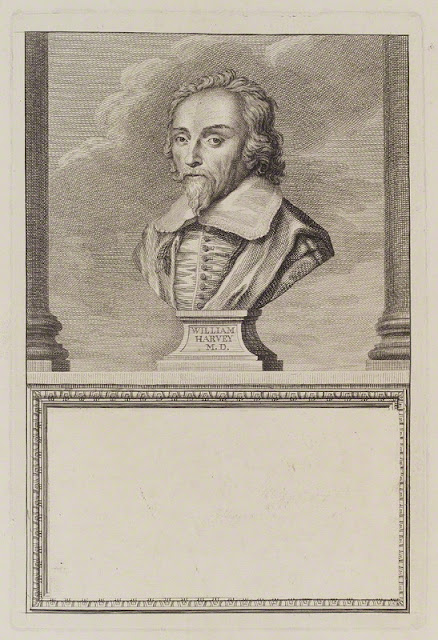 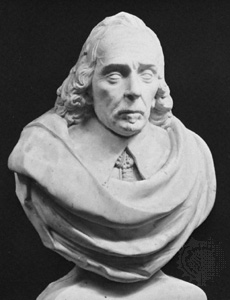 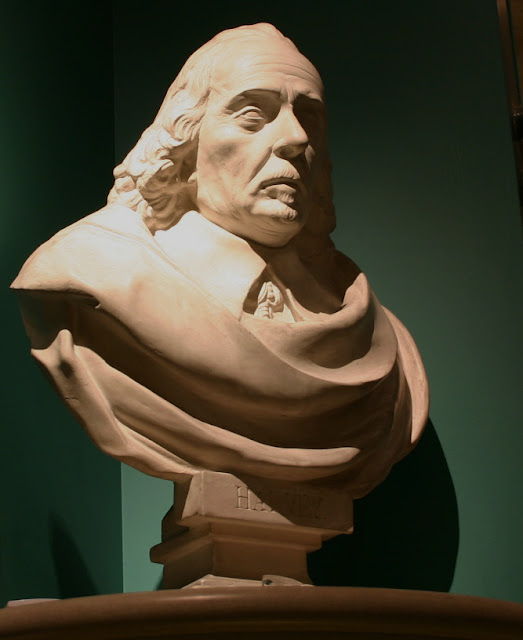 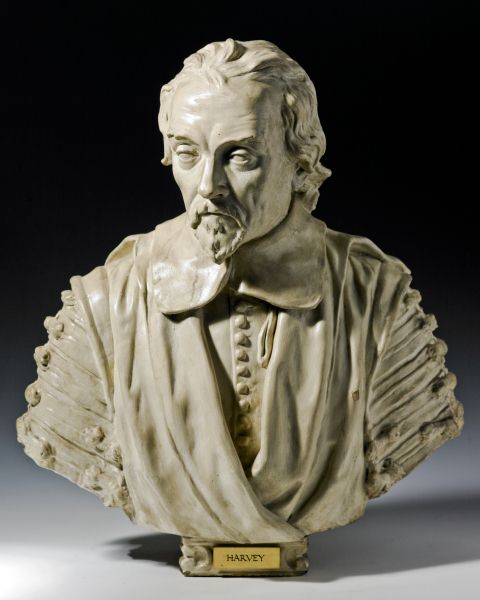 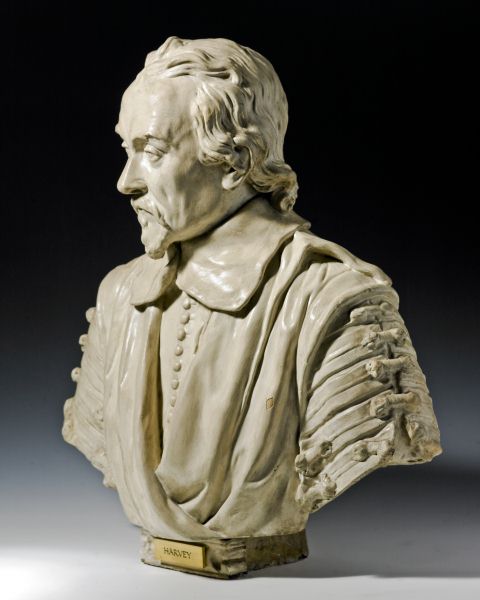 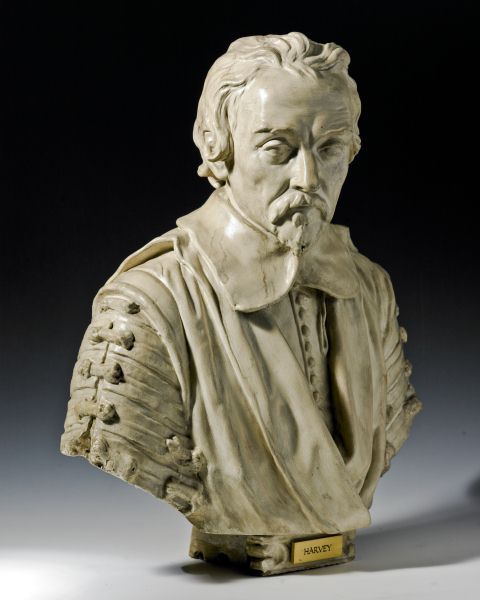 Note: The marble bust was commissioned by Dr Richard Mead, who in 1739 presented it to the Royal College of Physicians. Scheemakers based his portrait on an oil painting attributed to Wilhelm van Bemmel, which also belonged to Dr Mead (now Hunterian Museum, Glasgow; the portrait was engraved by Houbraken in 1739). There are two plaster versions of this bust at the Royal College of Physicians. 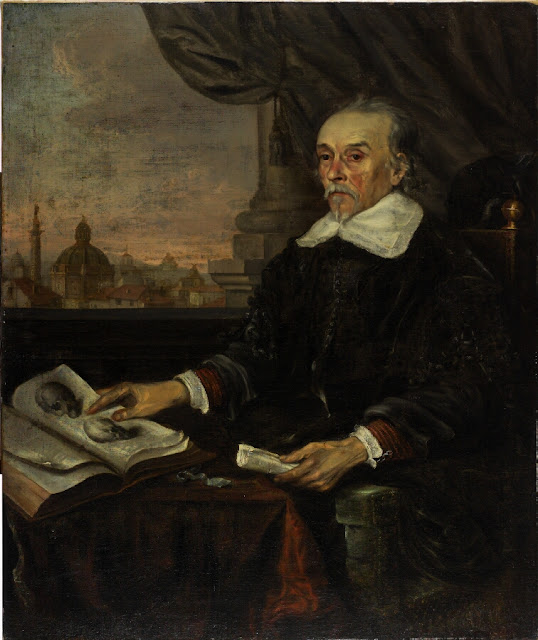 Note - They say -This portrait of Dr Harvey, the physician who discovered the circulation of the blood, was in the collection of the Hunterian Museum's founder and was regarded as one of the most important in Dr Hunter's Museum. Harvey's head, taken from this painting, was engraved by Houbraken in 1739 for Birch's Heads of Illustrious Persons, when the painting was in the possession of the Royal Physician Dr Mead. Houbraken attributed the painting (mistakenly, it would seem) to the landscape painter Bemmel. The book held by Dr Harvey has been identified by Mr Keynes as Adrianus Spigelius, Opera quae extant omnia ..., Amsterdam, 1645, tabula III, lib. II. Harvey's expensive, formal velvet gown was bequeathed to his colleague Sir Charles Scarburgh (1615-1694), of whom the Royal College of Physicians owns a portrait very similar in execution to this one. The portraits are close in size and appear to form a pair of pendants by one artist, each with a view of Rome in the background and with each physician gesturing towards an anatomical book on a table. In a letter dated 21/10/1991, Geoffrey Davenport, Librarian in the Royal College of Physicians, suggests that book in Harvey's hands is the anatomy book of Juan Valverde de Hamusco, his Vivae imagines partium corporis humani aereis formis expressae, Antwerp, 1566, plate 2, book 2. Hunter praised Harvey's discovery of the circulation of the blood as one of the greatest advances in science, and he did research into his life, borrowing papers from Harvey's family, including his will. Hunter's manuscript notes are in Special Collections (MS H 51). They incorporate a list of portraits, in oil and engraved, including Hunter's own picture. Hunter's papers record that Nicholas Claude le Cat, chief surgeon at l'Hotel Dieu, had a copy of this portrait made by Catherine Read, its present location unknown. 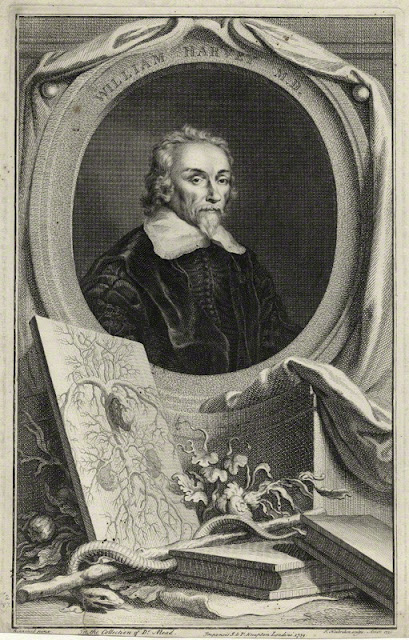 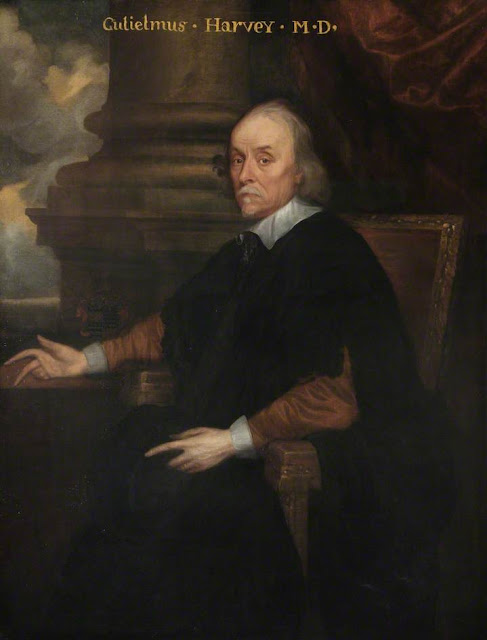 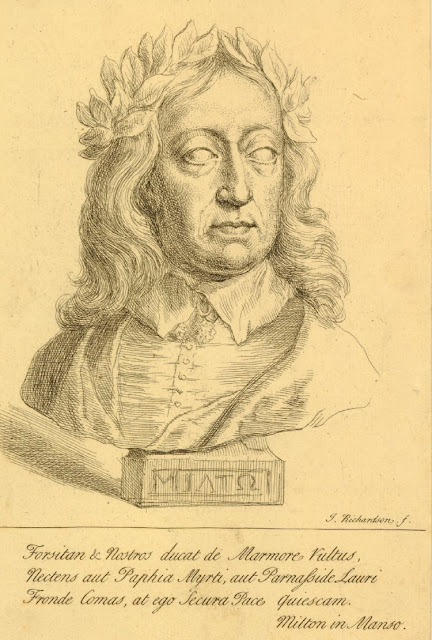 Engraver and portrait draughtsman. Son of a bit-maker, apprenticed to the printseller William Peake for ten years in 1635; this suggests that he was born about 1620. Peake was not himself an engraver, and Bagford's statement that John Payne trained Faithorne in the art is entirely believable. On William Peake's early death in 1639, Faithorne was turned over to Robert Peake, William's brother, and it was Robert who first published Faithorne's plates between about 1640 and 1642 (see cat.76). In 1642 or 1643, Peake sold his business and stock of plates to Thomas Hinde when he joined the Royalist army, and Faithorne served as his ensign until both were captured in October 1645 at the end of the two-year siege of Basing House.


Faithorne was brought to London and kept a prisoner in Petre House in Aldersgate Street. He was however able to continue engraving, and the four plates he made for Thomas Rowlett belong to this period. Eventually his friends managed to commute his imprisonment to banishment, and he went to Paris, probably late in 1646 or 1647. There he was helped by the famous print collector Abbé Marolles, who allowed him to copy prints in his collection, and kept himself alive by working for publishers such as Herman Weyen. He was still in Paris on 12 February 1651, when he signed a petition with twenty-seven of the leading figures in the French print world against a proposed tax on print production (M.Grivel, 'Le commerce de l'estampe à Paris au XVII siècle', Geneva 1986, p.95). He was back in London by November 1652 when he was made free of the Goldsmith's Company. In 1660, after the Restoration, he was appointed 'engraver in copper' to Charles II (see PQ XVII 2000, p.115).

Henceforth his career was straightforward. He specialised in portraits, usually after drawings he had made himself, and continued to engrave many frontispieces on commission for book publishers, and make private plates for sitters. He now set up as publisher himself of his own and others' plates, never again working for another publisher. He established a print shop, first 'at the sign of the Ship within Temple Bar (by 1654), and then 'next to the sign of the Drake without Temple Bar' (by 1662), where he also dealt in imported prints and artists' materials.

In 1662 he published his own translation of a treatise by Abraham Bosse on the art of graving which he illustrated by plates of the machines he used. In his latter years he produced many chalk portrait drawings.

He had two sons, William II (qv), and the bookseller and auctioneer, Henry Faithorne, who became bankrupt in March 1691. 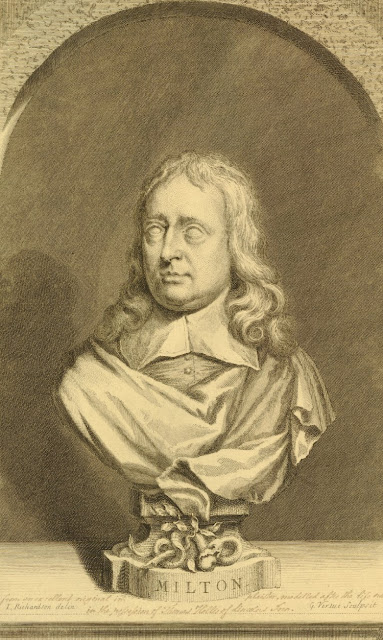 Plaster Bust of Milton.
Engraving by George Vertue after a drawing by Jonathan Richardson Senior. 1738.
Frontispiece to 'A complete collection of the historical political and miscellaneous works of John Milton' (1738).

Annotated in pen "from an excellent original in plaster, modelled after the life now in the possession of Thomas Hollis of Lincolns Inn" 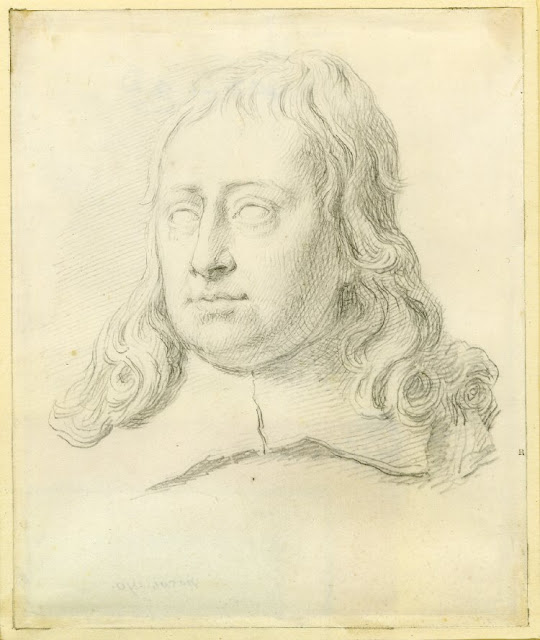 Drawing in the British Museum by Jonathan Richardson Senior
Inscribed in graphite by the artist: "Milton" and "17 Feb 173. [partly cut away]"

Posted by David Bridgwater at 05:50