Frederick, Prince of Wales and the busts of the "Patriot Circle" by Scheemakers, Rysbrack and Ady in the Temple of Friendship at Stowe. A bust of Paul Joddrell by Thomas Ady

Frederick, Prince of Wales and the busts of the "Patriot Circle"
by Scheemakers, Rysbrack and Ady(e)
Formerly in the Temple of Friendship at Stowe.

The Royal Collection website entry does not make it clear whether this bust is signed.

My opinion is that it is also by Ady(e). 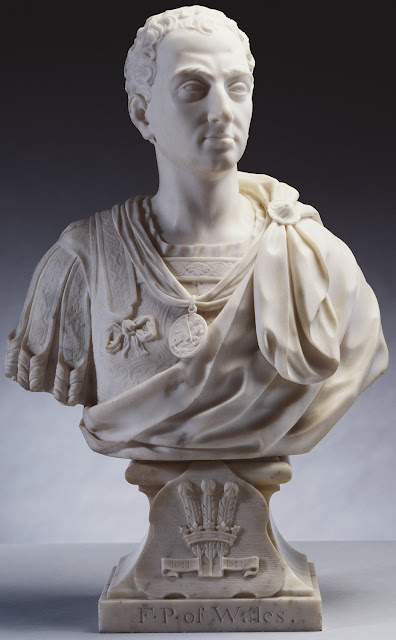 The Temple of Friendship at Stowe. 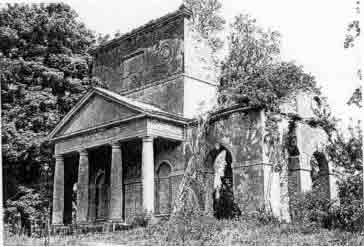 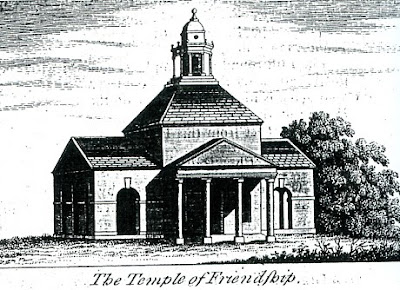 Engraving from Benton Seeley's A Description of the Gardens of Lord Viscount Cobham at Stow in Buckinghamshire, 1744. 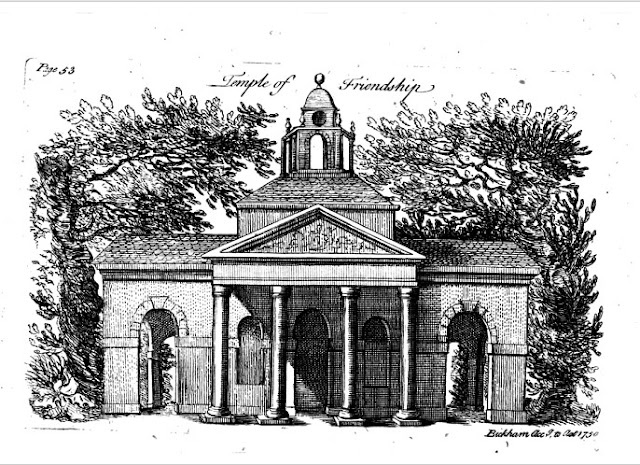 Another engraving by our old friend George Bickham the Younger, of the Temple of Friendship from The Beauties of Stow, or a description of the most Noble House, Gardens and Magnificent Buildings therein of the Right Honourable Earl Temple, Viscount and Baron Cobham.... with engravings by Geo. Bickham. 1756. This engraving from a new edition of Benton Seeley. A description of the Gardens.... - 1780.

Showing the parapet raised in about 1760 to match the Queens Temple.

Designed by James Gibbs and begun in 1737 - Inscribed on the exterior of the building is AMICITIAE S (sacred to friendship),  inside were placed 10 busts in white marble on black marble columns of Lord Cobham and nine of his friends who were syled The Patriot Circle:

Richard Temple, Lord Cobham, bust by Scheemakers in V and A

Earl Bathurst, (a bust on the monument in Cirencester Abbey possibly a version, )

William Pitt the Elder, the Earl of Chatham.

John Fane, the Earl of Westmoreland, Bust by Ady (V and A).

Some are believed to be by Ady - this needs confirming. Bickham (1756) says "some of them fine, by Rysbrack"

The temple was badly damaged by fire in 1840 and is now a romantic ruin. The busts were moved to the Grenville Vestibule. All ten were sold in the Stowe Sale of 1848. 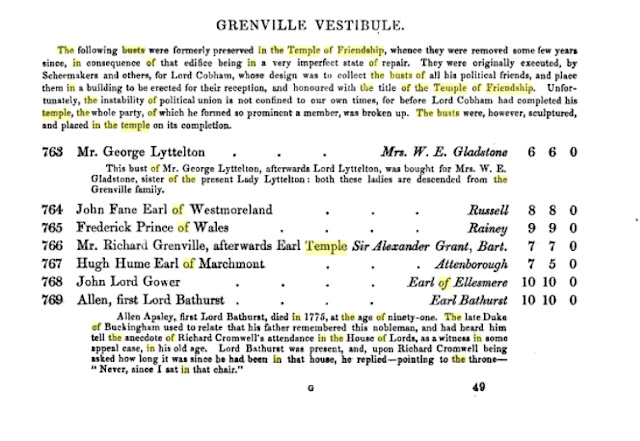 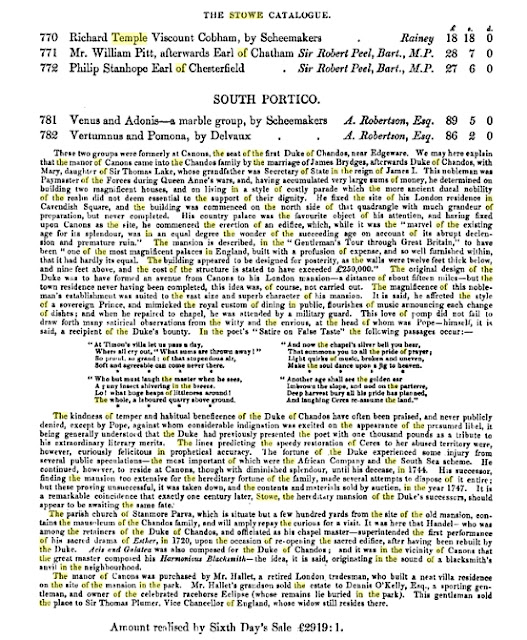 Excerpts above from The Stowe Sale Catalogue of 1848 - giving some details of the bust their purchasers and price. Extract above from Nollekens and his Times by John Thomas Smith, pub. 1828.
I will be publishing on the 3 dimensional images of Shakespeare in due course. 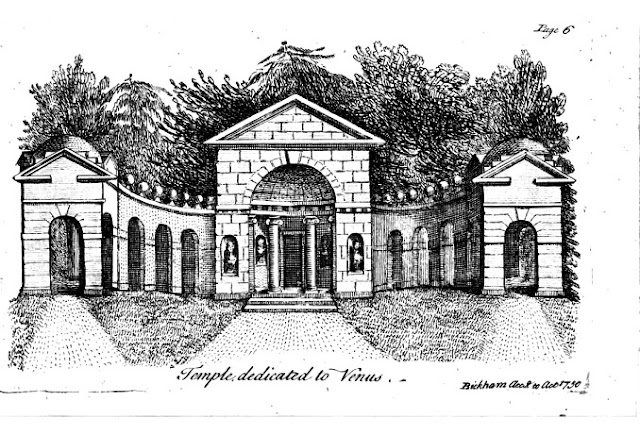 Bickham, Temple of Venus at Stowe. 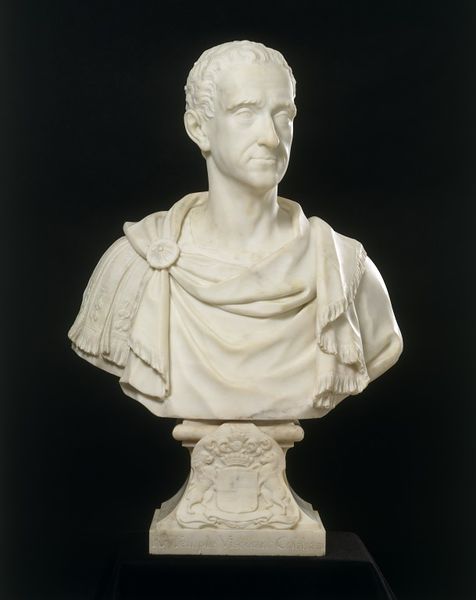 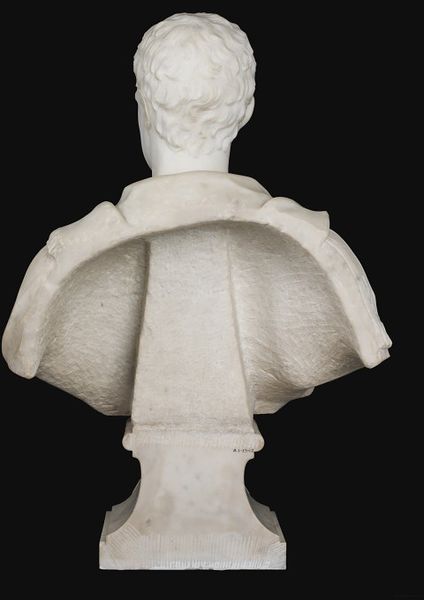 One of the series of ten busts executed for Richard Temple, 1st Viscount Cobham for the Temple of Friendship at Stowe, Buckinghamshire, later moved to the Grenville Vestibule there. Sold on the sixth day of the Stowe sale, 21 August 1848, lot 770, for £18 18s to Mr Rainey, who may have acted as agent for the Temple family.

Included in the sale of the Executers of the Rt Hon. Algernon William Stephen, 5th Earl Temple, removed from Newton Park, Bristol, held at Sotheby's, London, 9 May 1941, lot no. 65.

Purchased by Dawson for £44.

Acquired, probably through Dawson, by Dr W.L. Hildburgh F.S.A.; on loan from Hildburgh from June 1941. Given by him to the Museum as a New Year gift in 1942. 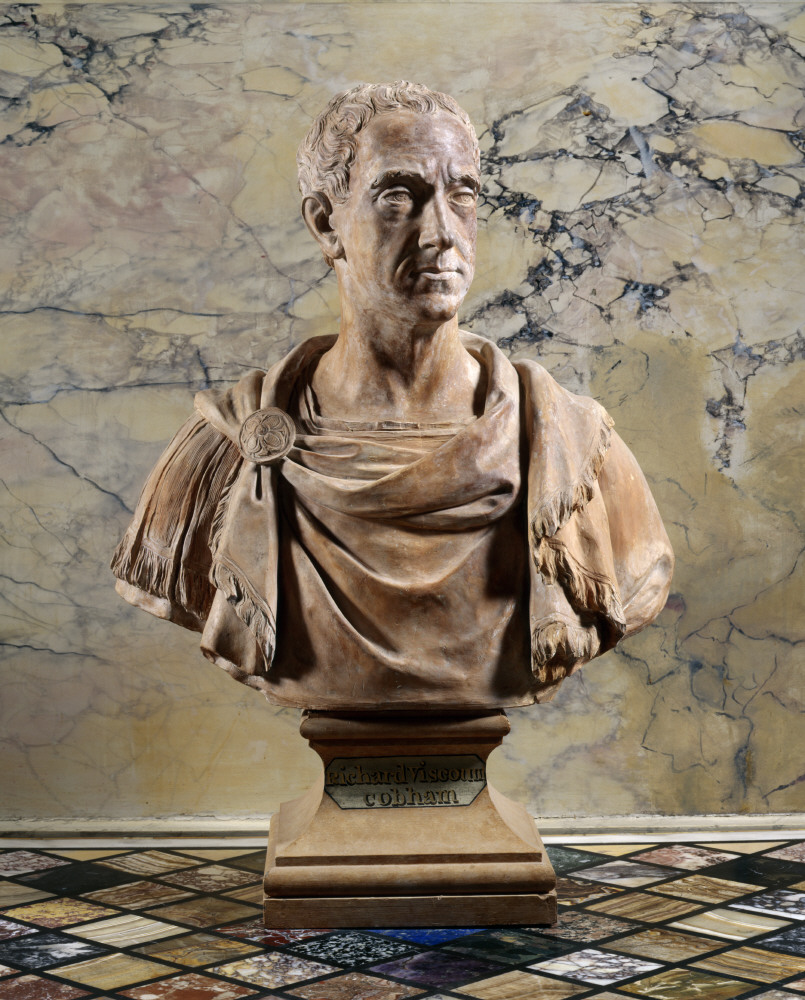 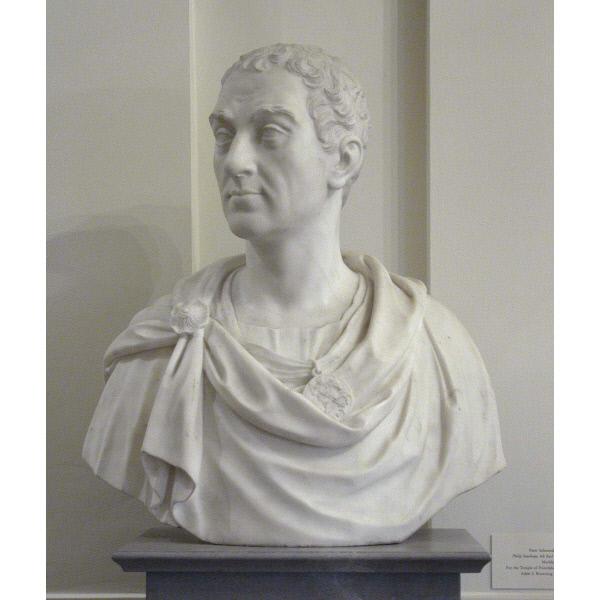 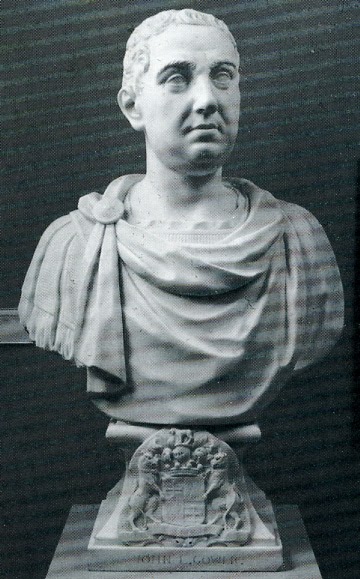 In Peter Scheemakers by Ingrid Roscoe in Walpole Society Journal, 1999, she suggests that this bust is by Scheemakers. The style and carving of the socle leads me to believe that it is possibly by Ady(e) 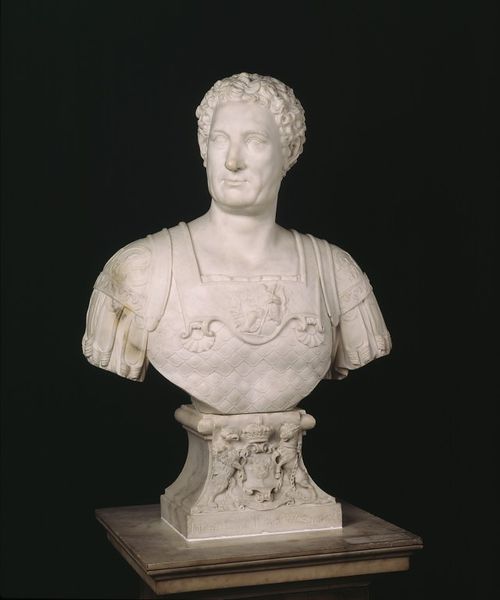 Carved for Lord Cobham for the Temple of Friendship at Stowe.

John Fane, 7th Earl of Westmoreland, built Mereworth Castle in Kent (designed by Colen Cambell in 1723, but based on Palladio's Villa Rotunda, Vicenza of 1565).

Photograph from the V and A Museum. 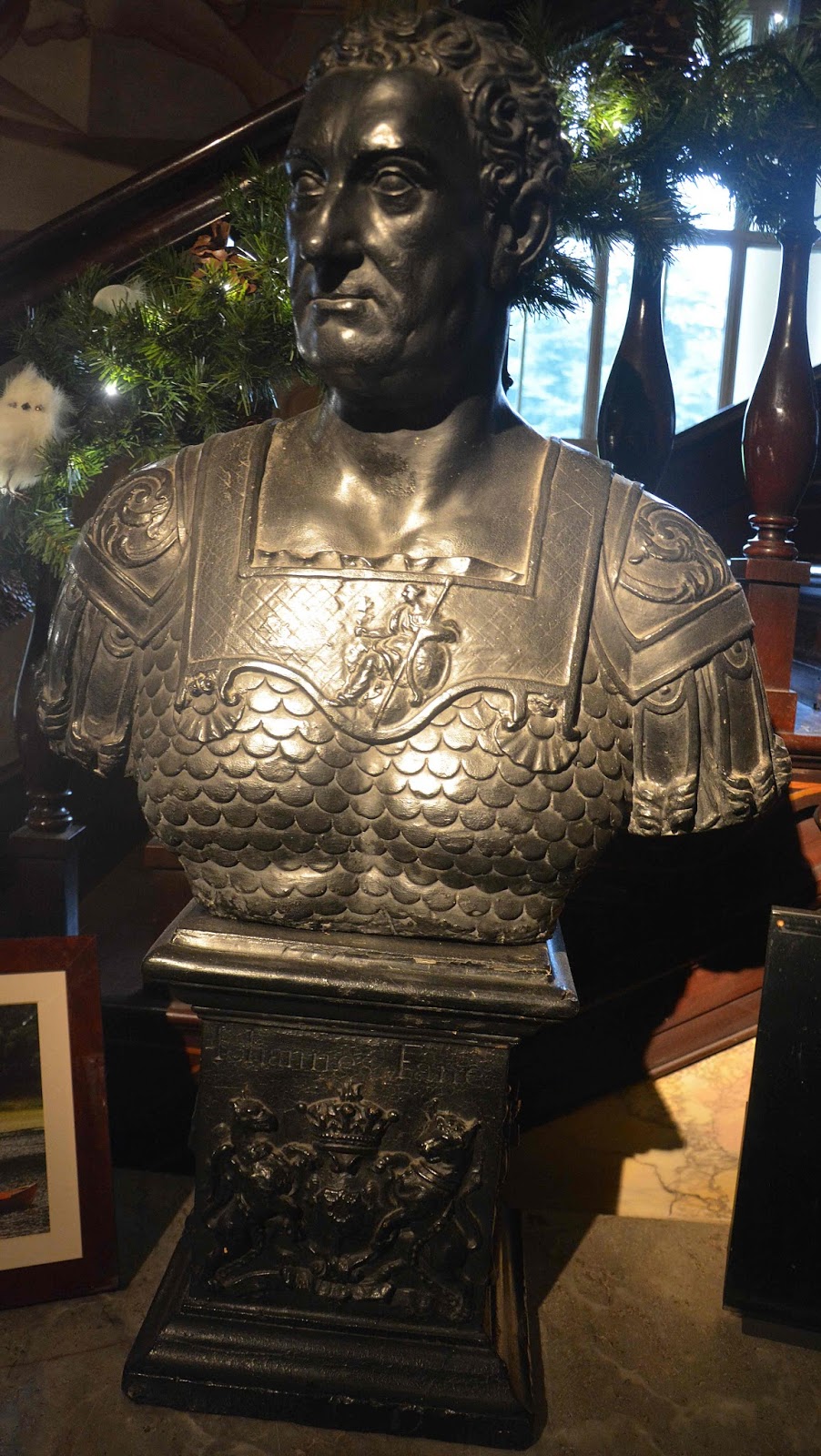 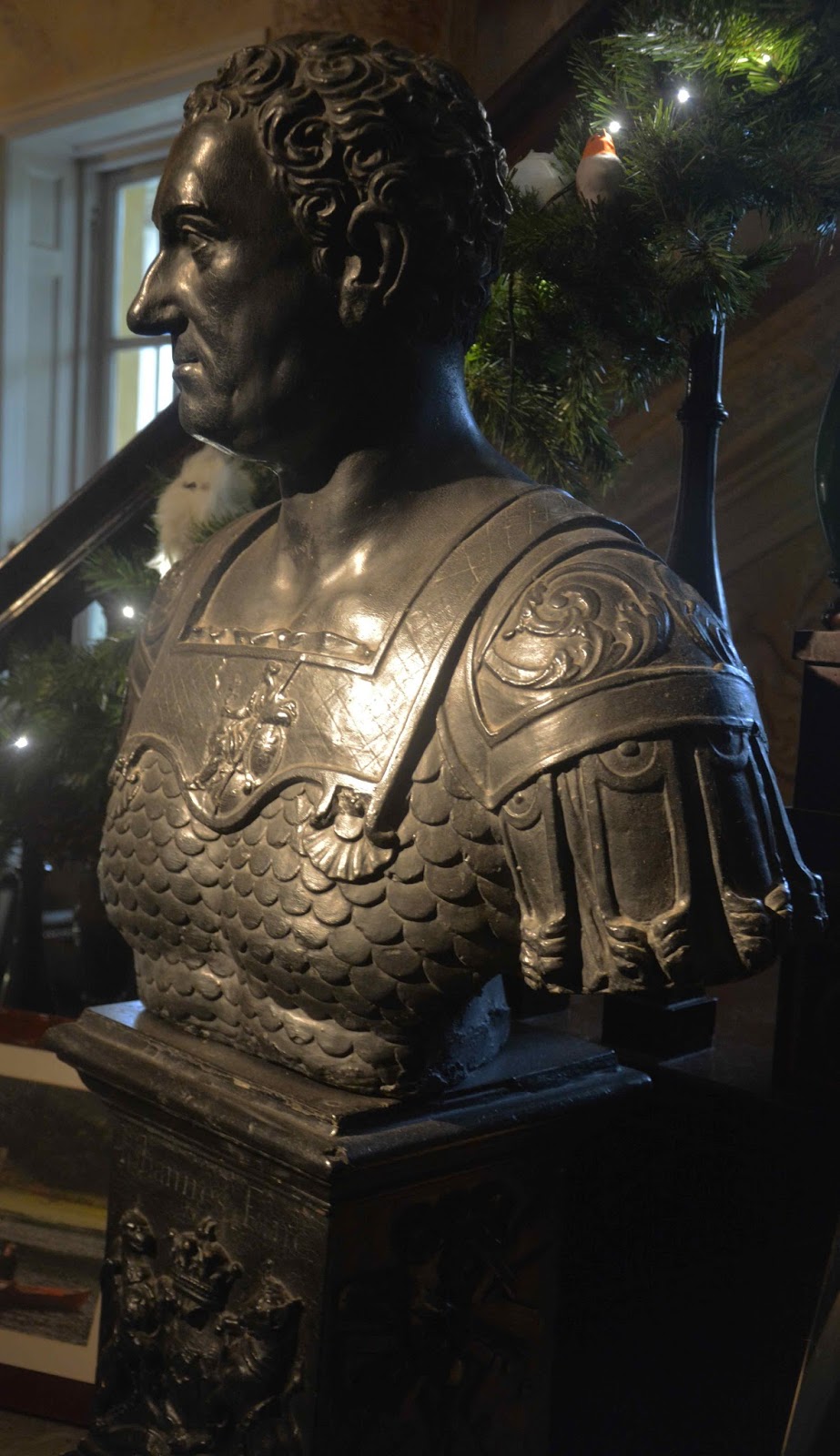 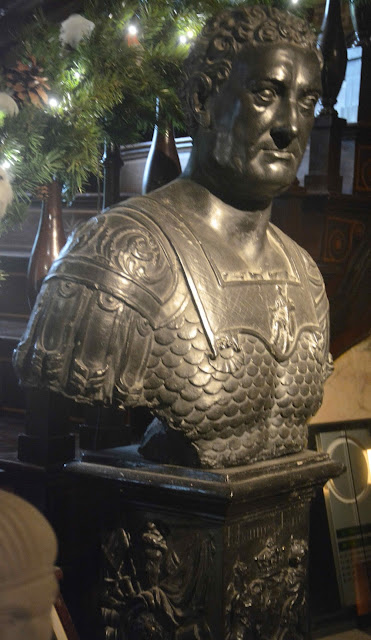 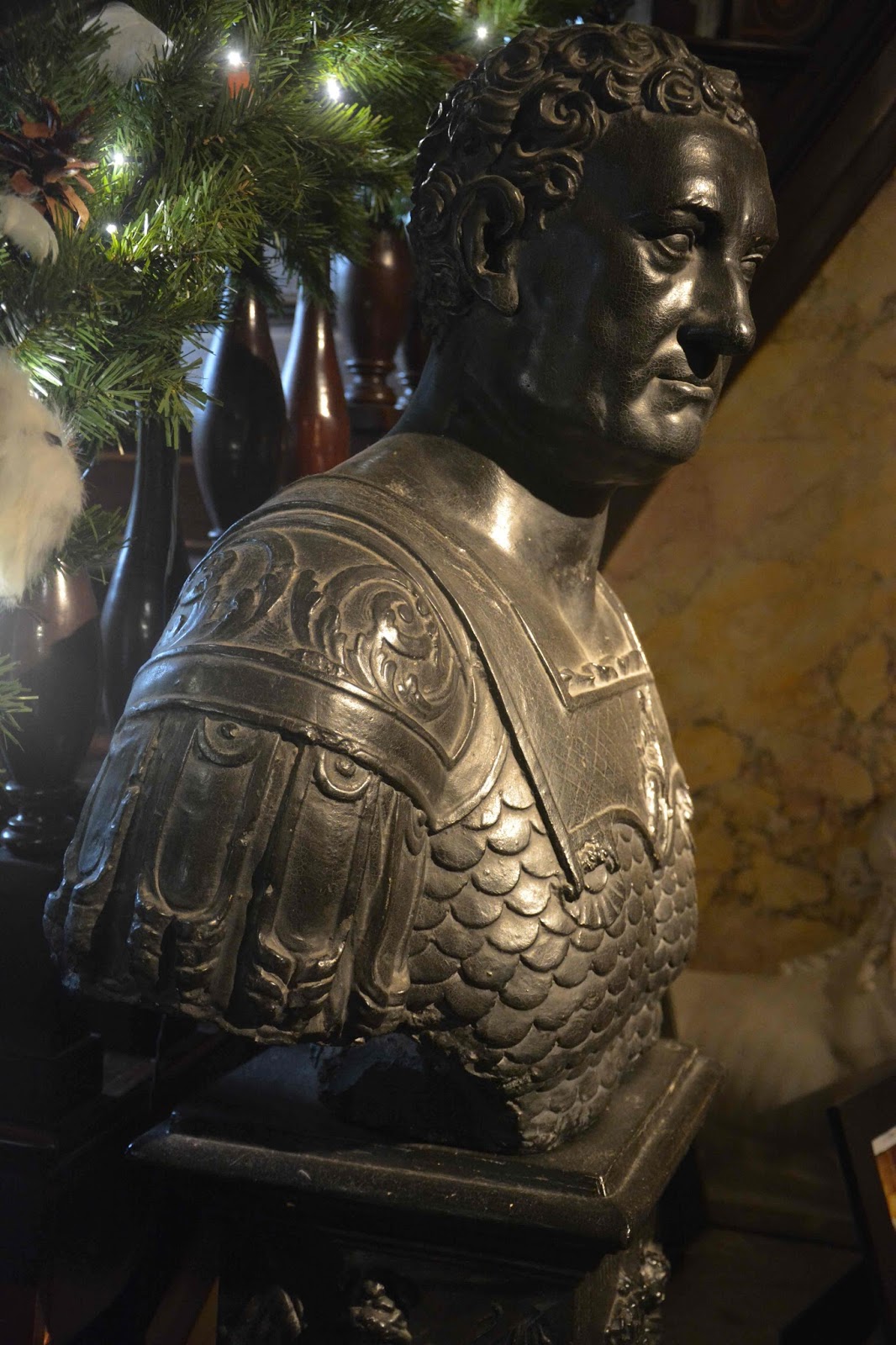 Photographed without a flash in very poor light.

I am very grateful to Sir Edward Dashwood of West Wycombe for allowing me the opportunity to visit West Wycombe and to photograph the sculpture. 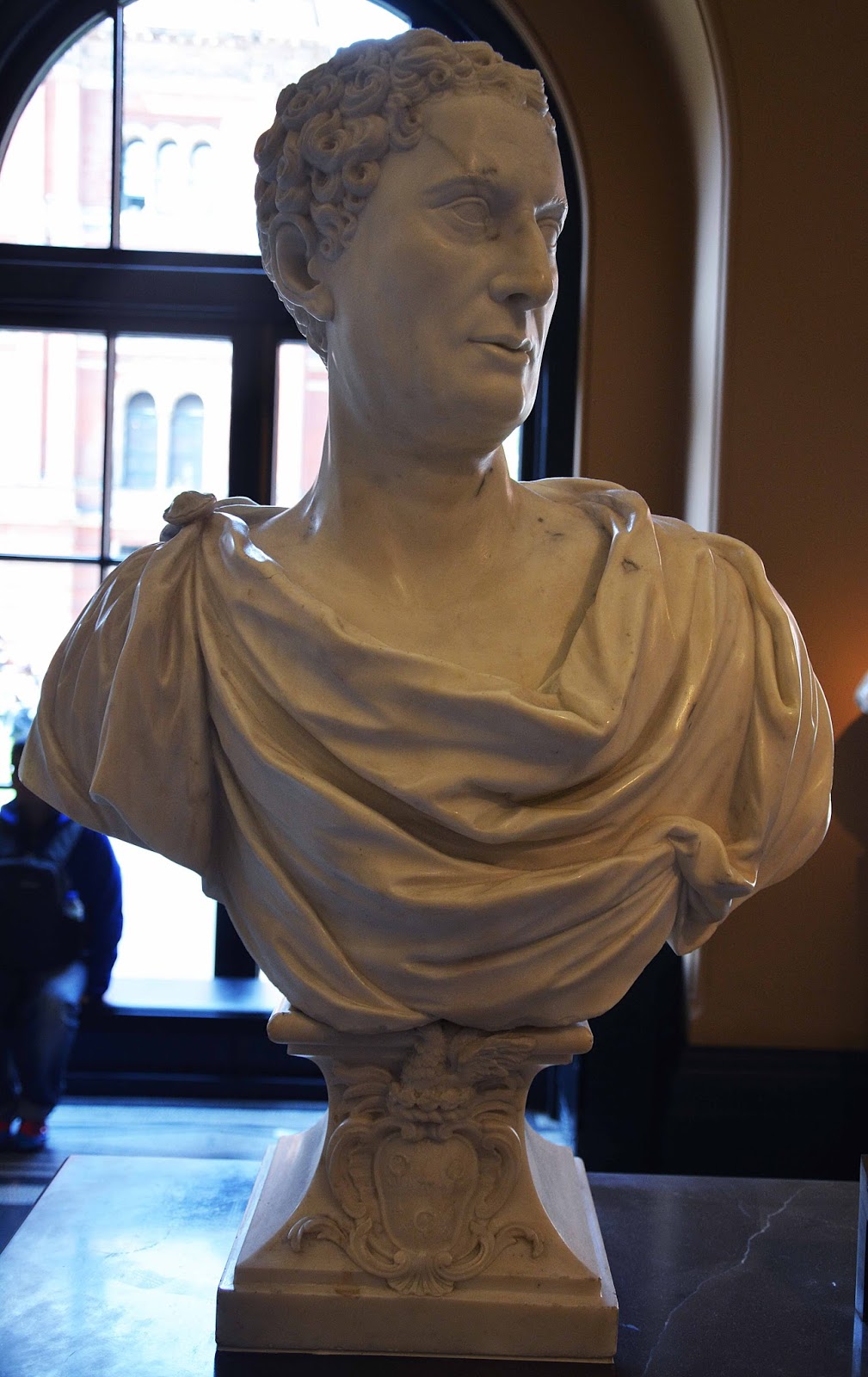 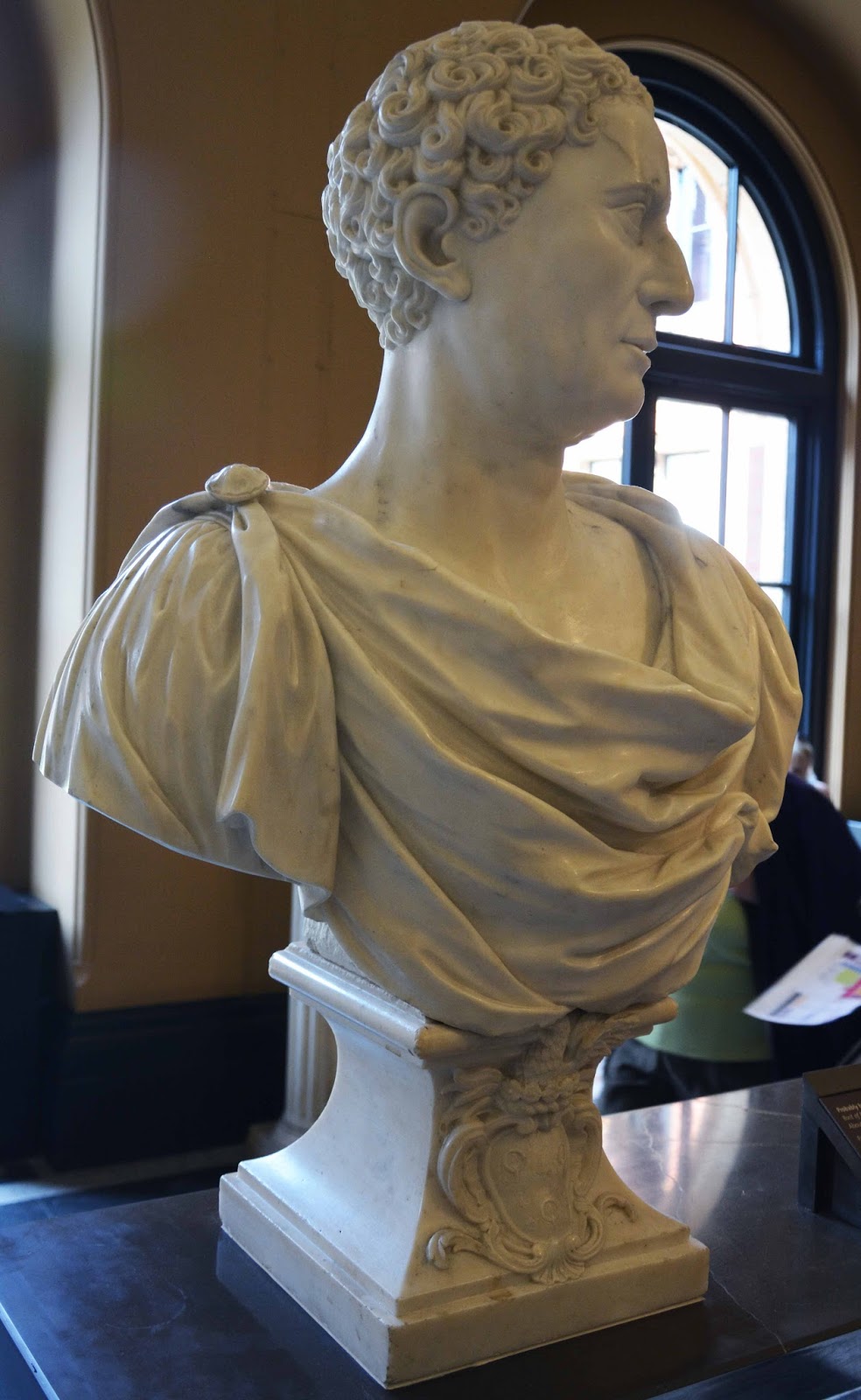 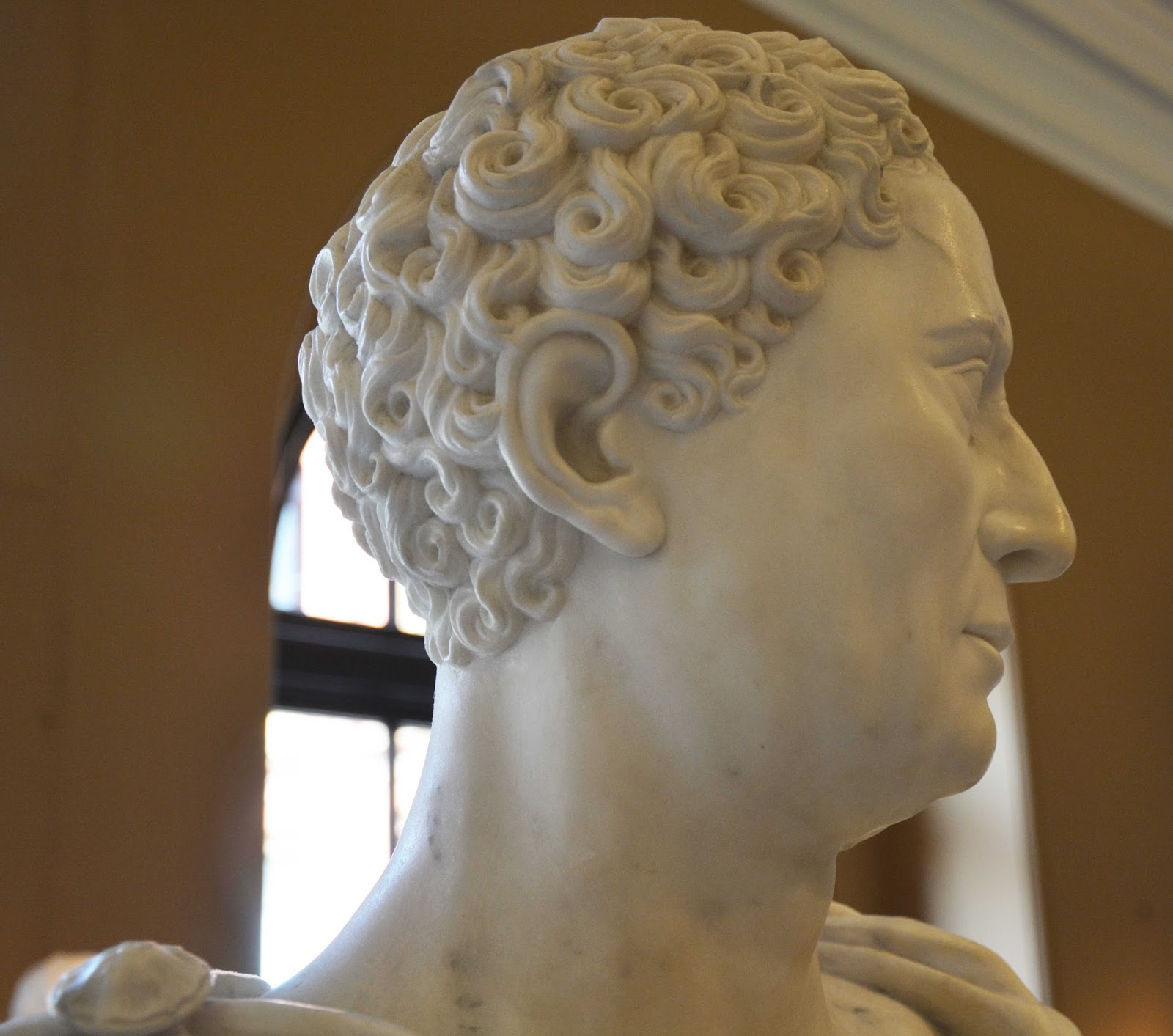 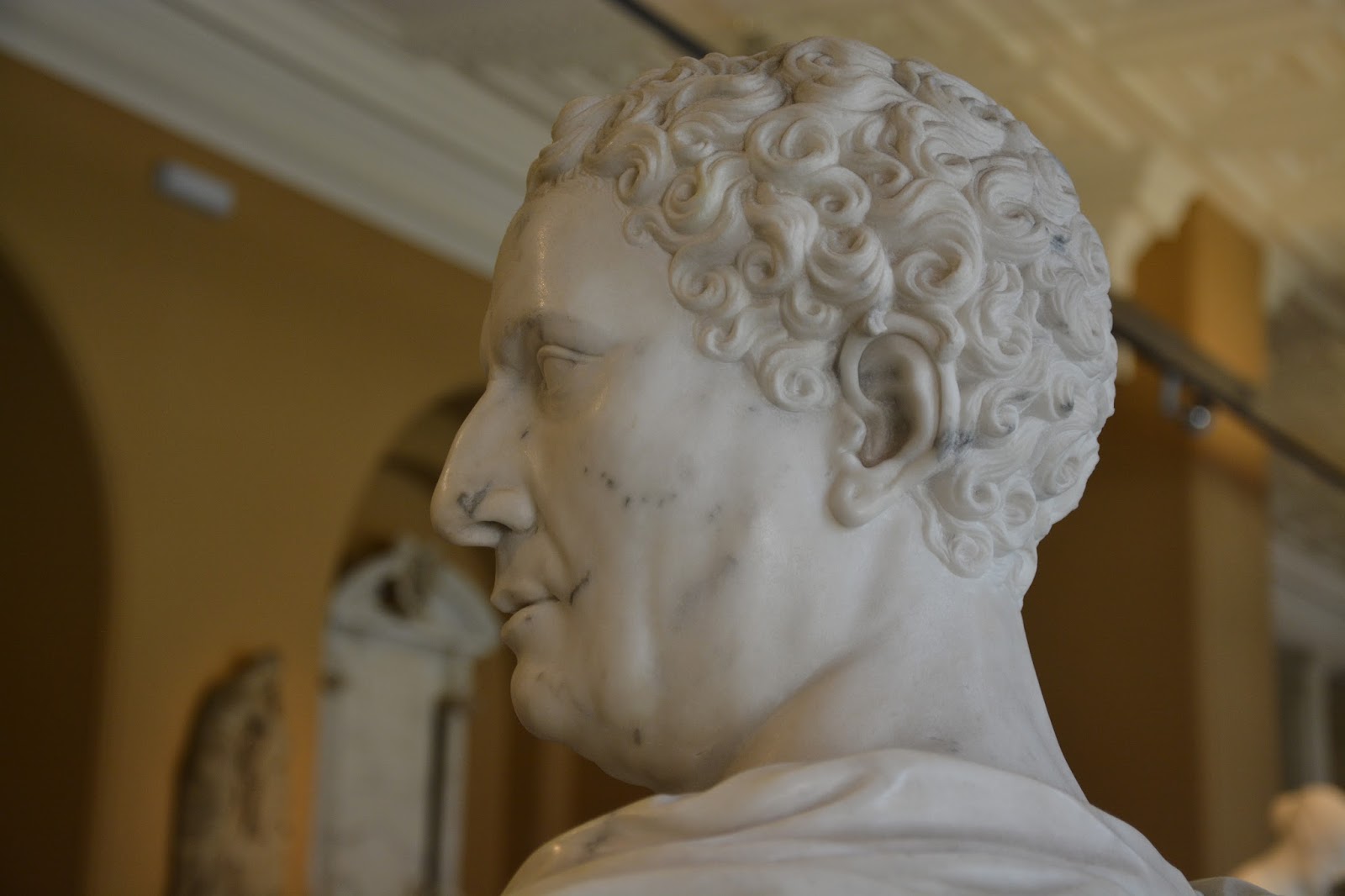 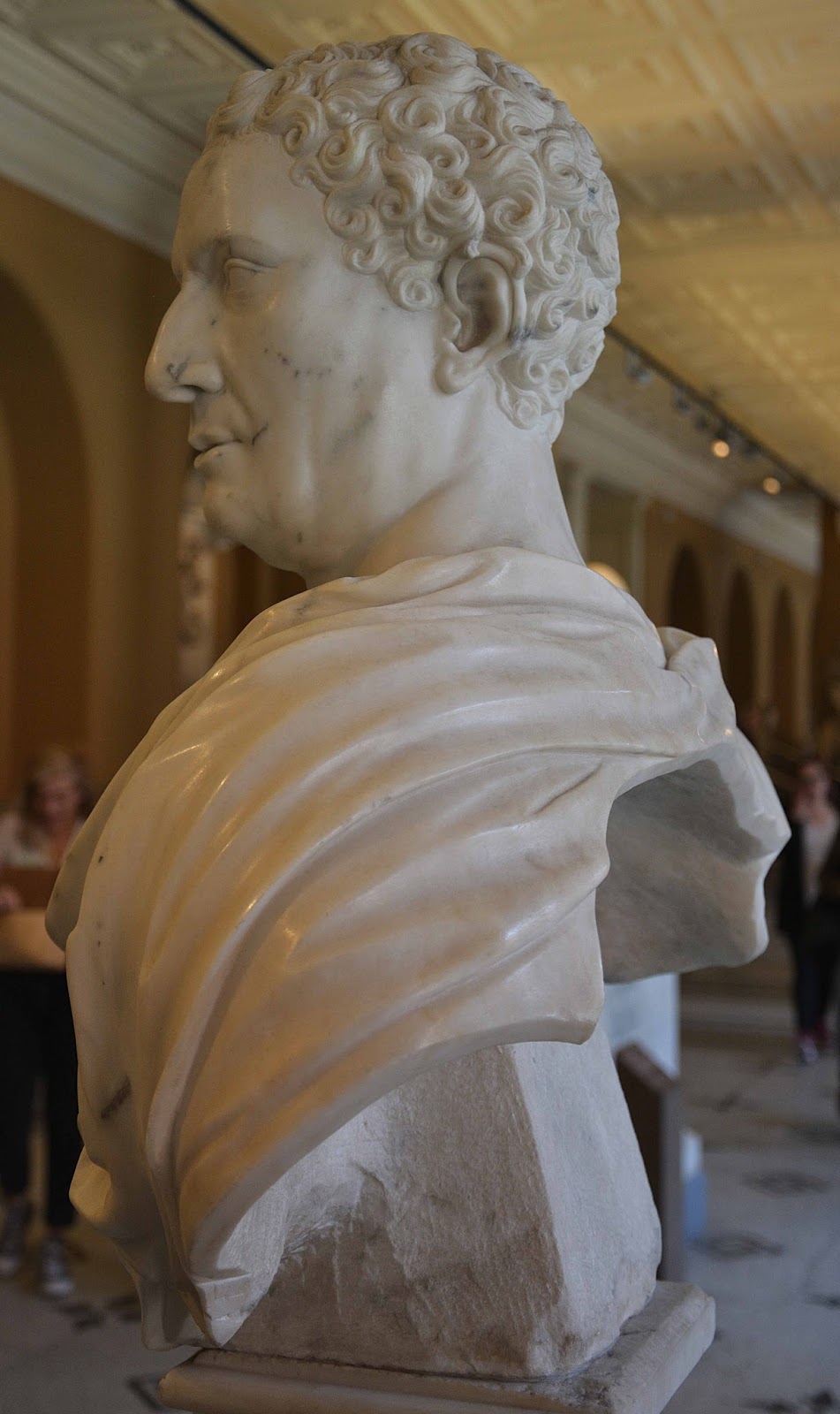 A marble bust believed to be by Ady(e) of Paul Joddrell of c.1740  is in V and A.
Joddrell was Solicitor General to Frederick, Prince of Wales.

The Style of the socle is peculiar to Ady(e).
Another bust that appears to have suffered from overzealous restoration and re polishing.

It is recorded as the home of Henry Joddrell, the sitter's third son, and it is presumed that the bust remained at Bayfield Hall until its sale to Kerin.

Purchased by the Museum from Kerin in 1956 for £300, using funds from the bequest of Francis Reubell Bryan.

Not much has been written about Thomas Ady(e).

This seems like a good place to add what I know.

1737 - Ballot box designed by Knapton for the Soc. of Dilettante
1753 - Carved work at Carlton House 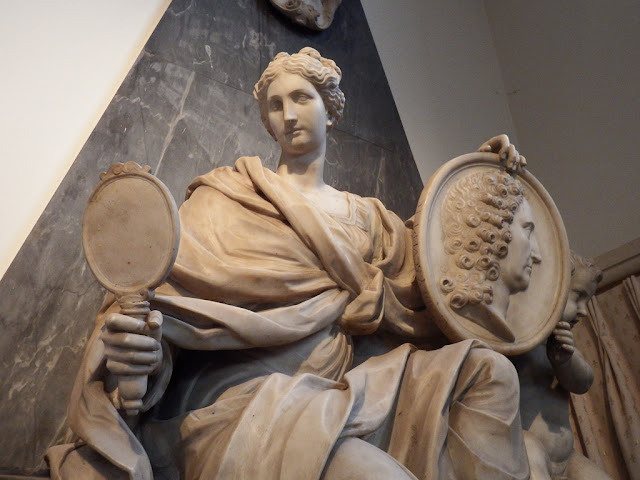 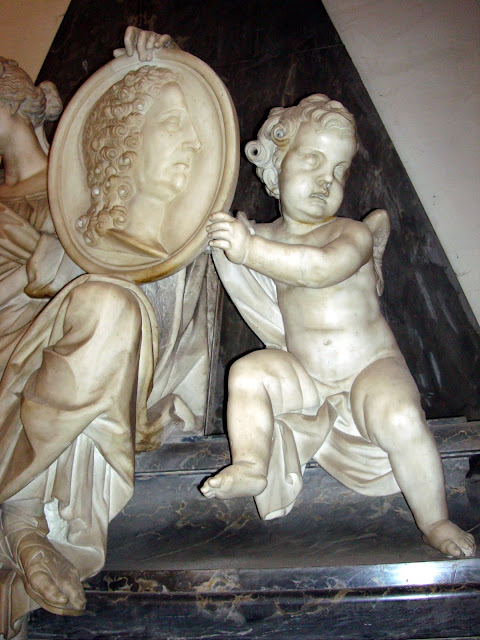 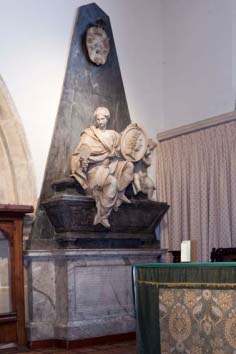 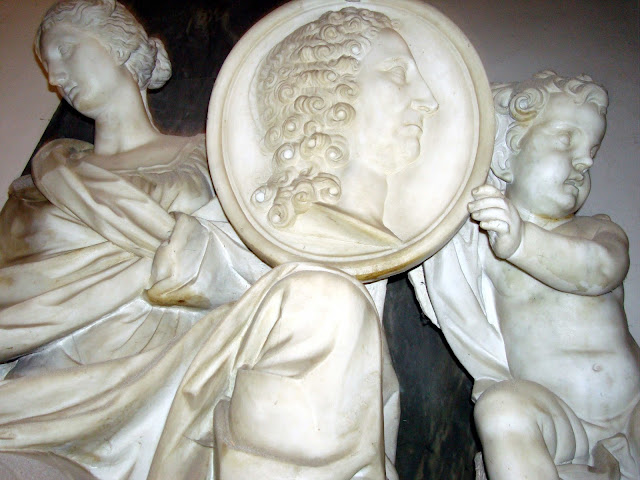 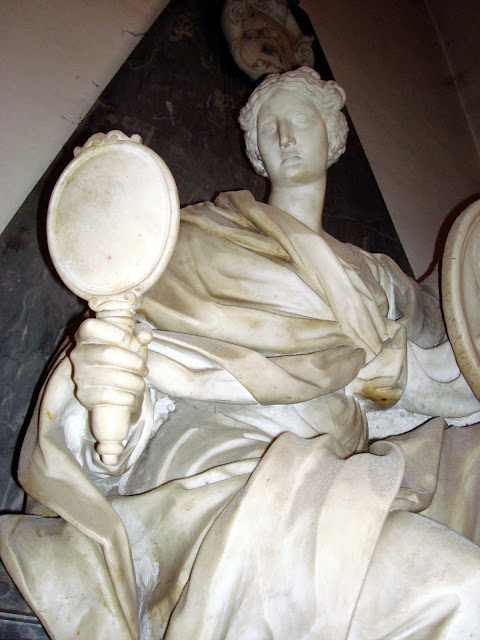 Left hand side of panel on base, inscribed letters:

Near this Place lyeth Interred ye Body of
CHARLES SERGISON Efqr. Of Cuckfield Place,
who departed this life Novr.ye 26th. 1732 Aged 78.
He was initiated into ye Civil Government
of the Royal Navy in the Year 1671,
as a Clerk in one of His Majesty's Yards,
& laudably Served through Several Offices
till the Year 1719 (namely 48 Years)
35 of which as a Principal Officer and
Commifsioner to the Satisfaction of
the Several Kings and Queens, and their
greatest Ministers, and all his Superiors,
about which time the Civil Government
of the Navy being put into Military hands,
he was esteem'd, by them, not a fit person
to serve any longer.

Right hand side of panel on base, inscribed letters:

He was a Gentleman of great Capacity & Penetration
exact Judgment,
close Application to Businefs
Strict Integrity:
These Virtues compleatly qualify'd him for t/y [that] Post
which he so well fill'd, so long enjoy'd
In those who serv'd under him. Merit alone recommended
Fidelity and Diligence were rewarded,
which gain'd him Respect, Esteem and Honour.
He serv'd his Country in several Parliaments,
where like a true Patriot,
he consulted only ye real Interest of ye Nation,
without any particular views of his own.
In private Life He observ'd Justice & Probity
was Affectionate to his Relations
Peaceable to his Neighbours
Kind and Beneficent to his Servants
And in every Station an Honest Man

Charles Sergison purchased Cuckfield Park in 1691 from Mary Clark, the last of the Bowyer family who had built the house 100 years before and it remained in the family until 1968. By 1800, the Sergison Family owned forty one properties in Cuckfield. 'Adey' is spelled 'ADYE' on most sources. Sergison had been granted the coat of arms with a dolphin crest also in 1691. Sergison was, at age 17, a junior in one of the naval dockyards and became Chief Clerk to John Pepys, the brother of the diarist. He rose to become one of the four Principals in control of the navy and he served for 48 years under William III, Queen Anne and George I. He was aggrieved by being forced to retire at 65 years old. During his retirement he collected sixty five folios of Minutes of the Navy Board, now known as The Sergison Papers and published by the Naval Records Society. He also assembled a library of books for which he had three bookcases made by the joiner who had worked for Samuel Pepys, later known as The Pepys Bookcases. His papers are now in the Royal Maritime Museum in Greenwich. He died at Cuckfield Place at 78 years in November 1732. They had no children and his estate was left to Thomas Warden II and to his late wife's sisters and nieces. A condition of the will was that Thomas Warden take the name of Sergison. His will directed that ''my body be decently interred in my burying place in the chancel of the parish church'' and ''a monument be set up on the north side of the chancel''. The Rev Daniel Walter who dominated Cuckfield for nearly half a century (1713-1761), refused permission for the erection of the monument overshadowing the altar but Thomas Warden II called a vestry meeting and enlisted the support of several inhabitants.
('A Chronicle of Cuckfield')

Posted by David Bridgwater at 07:07