Terracotta Bust of Tillemans by Rysbrack

The Terracotta Bust of Peter Tillemans (1684 - 1734),
and a Terracotta self portrait bust by Michael Rysbrack.

As far as I can tell this is the first use of English sculptors terracotta prototype busts which were displayed in someone's home as independent works of art. 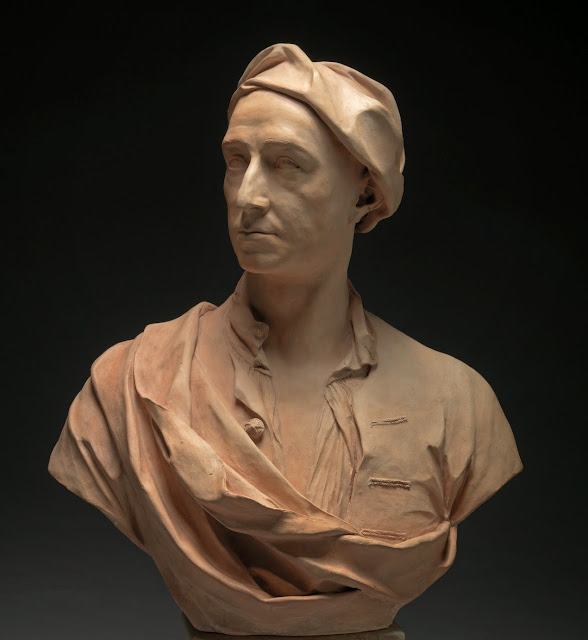 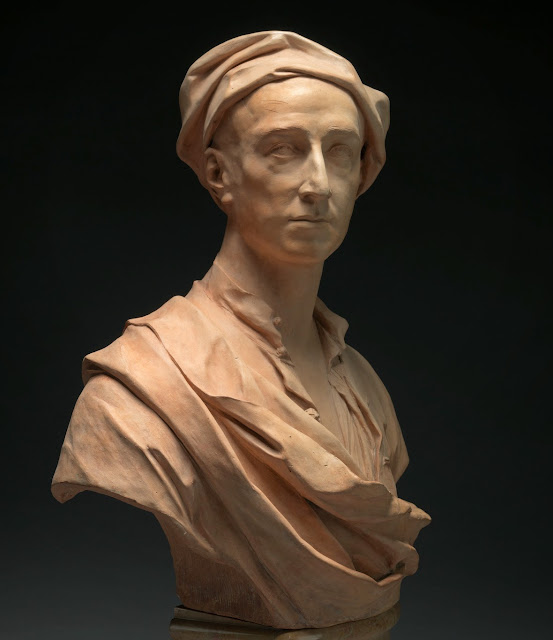 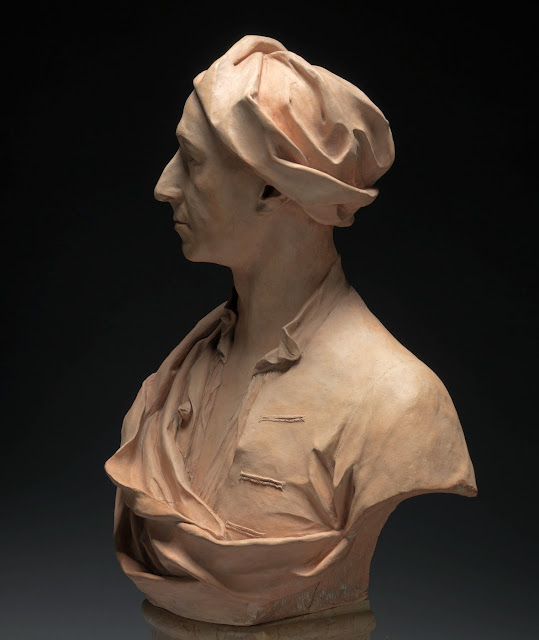 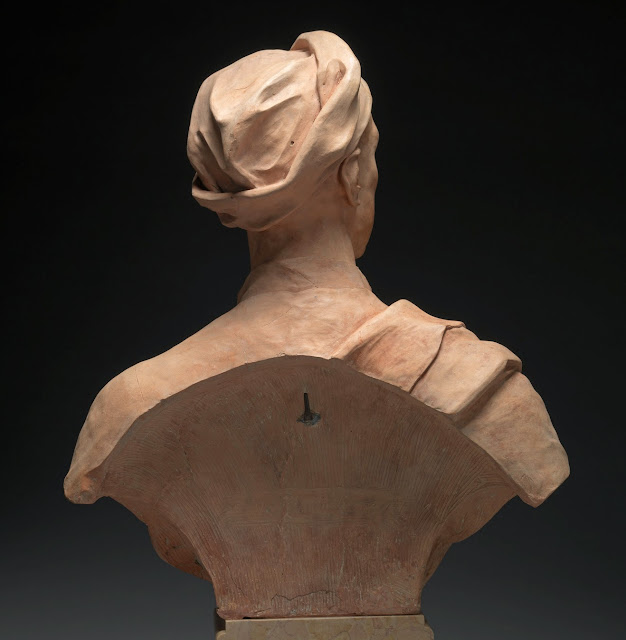 ﻿
Peter Tillemans, c.1684–1734 A painter and draughtsman chiefly of topographical landscapes, Thames-side views and sporting scenes; he also recorded are some decorative and scenery paintings, battle-pieces and a few portraits.

Born c. 1684 at Antwerp, the son of a diamond-cutter, and trained there as a copyist; in 1708 was brought to England by ‘Turner, a picture dealer’ for whom he copied battle scenes and painted small genre pictures. By 1711 had joined Kneller's newly founded Academy of painting; later joined the Society of St Luke (and was its Steward, 1725). Lived chiefly in Westminster, but travelled to execute commissions; by 1715 had acquired his most faithful patron, Dr Cox Macro, of Little Haugh, Suffolk. In 1719, he was commissioned by the antiquary John Bridges to make about 500 drawings for a projected history of Northamptonshire; ‘from this to drawing views of gentlemen's and noblemen's seats was a natural step, and from topographical panoramas to enlivening them with strings of horses was another’ (Waterhouse 1953, p.216). Raines notes that the bulk of Tilleman's work was done after about 1720, painting various country houses and the views from them; also painted Thames-side views at Greenwich, Chelsea, Richmond and Twickenham. Several paintings of racing at Newmarket and some hunting pictures are known; four of them (three views of Newmarket racecourse and ‘The Fox Chase’), engraved by Claude du Bosc and published in 1723, are among the most spectacular early sporting prints in England. He suffered from Asthma. Tillemans died at Little Haugh, Dr Cox Macro's house in Suffolk, 19 November 1734.
_________________________________________

George Vertue notes his death, calls him 'the famous painter' and continues 'the model of his face by Rysbrack is very much like him, nothing more like unless his two daughters that he has left, he was a a member many years of the Grand Virtuosi club, London and had been steward(his picture painted by Mr Hysing at Mr Rysbrack's) Some of Macros papers are in the British Museum and amongst them is a letter from Rysbrack:

I ask theen Thousand pardons For Not Sending Soner the Bustow of our old Find Mr Thillemans. But havibg been very busy with the Kings Statue withs at present is up and finist at Geenwiths Hospital. I am informed out your letter from ye 14 Dec: about my own bustow withs I promis I Shall Do wan time parmits, but you do me a geat Daell of Honeur in to Heving my bust my prise is always 12 ginnes, But my old Frindt accound we shall Send the Same to mororow witht Mr Allen ye Bury Carier, Dereetit For you, an if you plst to Send your Servand wan the waggon comts at Bury he will find the same an I remain
Your most Humble, Servandt
to command Mich. Rysbrack.

(George II statue at Greenwich was erected in February 1735 and Tillemans died in December 1734).

There is an account book of Cox Macros at the Bodleian Library presented by Mrs Perowne a collateral descendant and this shows two payments to Rysbrack. They are undated, both payments are for £10.10.0. one entry is for 'the two models by Rysbrac', the other 'paid Rysbrac for his own bust'
This information transcribed from Michael Rysbrack Sculptor. MI Webb pub Country Life, 1954.

This is still the best source for an overview of the life and works of Rysbrack even if a little out of date. 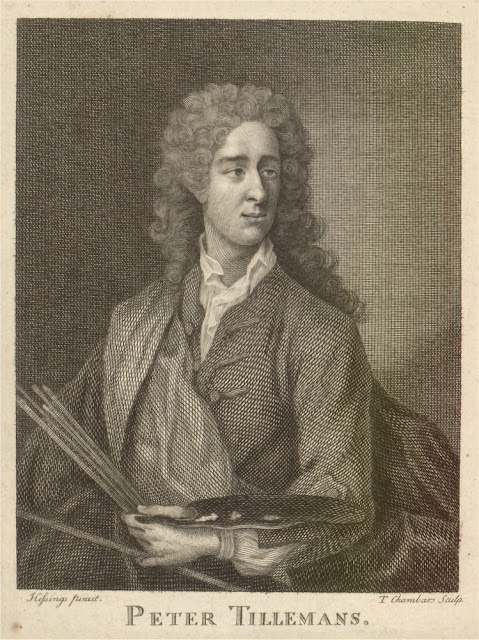 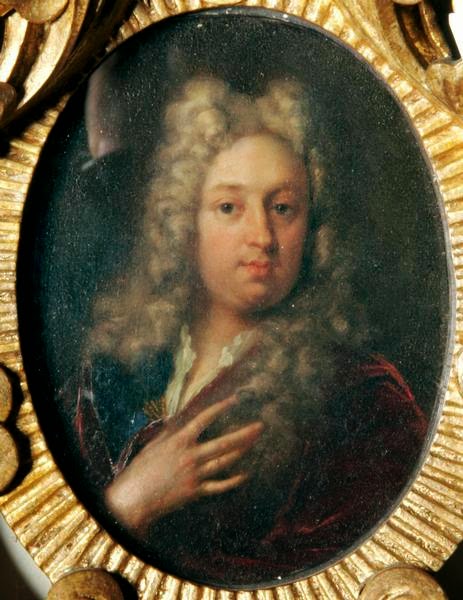 11.1 x 8.5cms
Purchased from the estate of Philippa and Charity Patteson through Sotheby's, 1991, with grant aid from the Museums and Galleries Commission (in lieu of inheritance tax), the National Heritage Memorial Fund, and the National Art-Collections Fund.

The Suffolk antiquary Cox Macro (1683-1767) studied medicine at Cambridge and Leiden Universities. He was a keen collector and an important patron of the Flemish artist Peter Tillemans. This small oval portrait on copper shows Macro in a full early eighteenth-century wig and was probably painted in Leiden by Frans van Mieris around 1703. However, documentary evidence (see notes for this record) suggests that the face was repainted by Tillemans, probably around 1716, when the sitter also appeared in Tillemans's well-known painting The Artist's Studio. Frans van Mieris came from a family of successful painters that included his father, Willem, and grandfather, also called Frans. Dr Macro's extensive collection of paintings, including several works by Tillemans, was inherited through marriage by John Patteson, in 1781. Today, the heart of that collection, including this work, forms part of the Patteson Collection at Norwich Castle Museum.

This painting is very probably the work described in a MS catalogue of Cox Macro's collection, in Macro's own hand, as 'Dr Macro. Young Mieris made the Drapery & Hand & P. Tillemans some part of the Face' (Norwich Castle Museum, Macro A); and as the work recorded in a later catalogue as 'Van Mieris -- 79 A port. of Dr Macro on copper 6' (Norwich Castle Museum, Macro B). 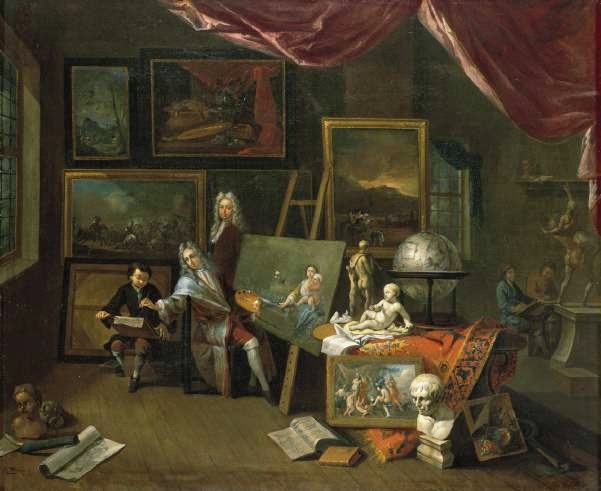 The Artists Studio by Peter Tillemans c.1716.
It is believed that the standing man is Cox Macro.

MACRO, COX (1683–1767), antiquary, was eldest son of Thomas Macro, grocer, alderman, and five times chief magistrate of Bury St. Edmunds, Suffolk (d. 26 May 1737, aged 88). Thomas Macro lived and made his fortune in the ancient house in the Meat Market, Bury, usually known, from the observatory on its top, as Cupola House, and he purchased the estate of Little Haugh, in the neighboring parish of Norton, for his country house.

He married, 9 Jan. 1678-9, Susan, only daughter and heiress of the Rev. John Cox, rector of Risby, near Bury, and great-granddaughter of Dr. Richard Cox, bishop of Ely. She died on 29 April 1743. Their son, Cox Macro, was born in 1683, and received his baptismal name from his mother's surname. His name provoked a friend to whom he applied for an appropriate motto for his family to suggest the punning device of 'Cocks may crow.' He was educated at Bury grammar school by the Rev. Edward Leeds, and the Latin speech which he made at the school before the Bishop of Norwich, on 15 May 1699, is still extant. He matriculated at Jesus College, Cambridge, but migrated to Christ's College on 19 Jan. 1701-2, in order, as the Latin entry in the books says, to enjoy better health (mutato cœlo), and to study medicine. On 3 Sept. 1703 he entered at Leyden University, where he studied under Boerhaave (Peacock, Index of Leyden Students, p. 64). He proceeded LL.B. at Cambridge in 1710, D.D. in 1717, and he was at the time of his death the senior doctor in divinity of the university.

He was chaplain to George II, but the possession of an ample fortune placed him above the need of further preferment. Richard Hurd was curate during 1742 - 3 of a parish near Norton, where he often saw Macro, and considered him 'a very learned and amiable man, the most complete scholar and gentleman united that almost ever I saw,' The doctor was 'master of most of the modern languages;' and he taught Hurd Italian. His house of Little Haugh contained many valuable paintings, a few pieces of sculpture, a choice collection of coins and medals, numerous manuscripts, and a library of books rich in old poetry and other rare works. The staircase was partly painted by Peter Tillemans of Antwerp, who died at Little Haugh in 1734, and was buried in the churchyard of Stowlangtoft, and the ceiling and dome were painted by Huysmans. A picture by Tillemans of the house, with Macro and the members of his family walking in front of it, was, with eleven other family portraits, in the possession in 1848 of the Rev. W. F. Patteson of St. Helen's, Norwich.
Macro died at Little Haugh on 2 Feb. 1767, and was buried on 9 Feb. in Norton churchyard, in an enclosure between the side of the vestry and a buttress to the church wall. His wife was Mary, daughter of Edward Godfrey, privy purse to Queen Anne. She died on 31 Aug. 1753, and was buried at Norton, leaving one son and one daughter. The former, for some time at Emmanuel College, Cambridge, with Hurd as his tutor, became a soldier, and died abroad during his father's lifetime, whereupon his sister, Mary, became her father's heiress. After his death — for he would not allow the union previously — she married, on 8 May 1767, William Staniforth of Sheffield, and died without issue on 16 Aug. 1775. Macro left a charitable bequest of 600l. to Norton parish, to provide twelve coats for poor men and twelve gowns for poor women.

A catalogue of Macro's treasures was compiled in 1766. Among them were a bust of Tillemans by Rysbrack, one of Rysbrack himself, drawings by the old masters, which had belonged to Sir James Thornhill, many letters from protestant martyrs, descended to him through Bishop Cox, the great register of Bury Abbey, a ledger-book of Glastonbury Abbey, the original manuscript of Spenser's 'View of the State of Ireland,' all the collections of Dr. John Covel, and numerous charters. Many of his manuscripts had belonged to Sir Henry Spelman, others formed part of the library of Bury Abbey, and several of them had been obtained through Hurd. A part of Macro's literary collections were presented by the Staniforths to Mr Wilson, a Yorkshire antiquary, who was his nephew; and when the Wilson library was dispersed in 1844 they went to augment the store of Sir Thomas Phillipps at Middle Hill.

The Macro property ultimately came to John Patteson, M.P. for Norwich, who disposed of the old masters by auction in 1819, and sold the books and manuscripts for a trifling sum — no more than 150l., it is said — to Richard Beatniffe, bookseller in that city, who resold them at a very large profit.
The manuscripts were sold for him by Christie of Pall Mall in 1820, and were purchased — forty-one lots by Dawson Turner and the rest by Hudson Gurney — for 700l. The latter portion, now in the possession of J. H. Gurney of Keswick Hall, near Norwich, are described in the Historical Manuscripts Commission's 12th Rep. App. pp. 116-64. Macro's correspondence with eminent literary men and artists (1700-64) forms the Additional Manuscripts 32556-7 at the British Museum. Some of his biographical notes are inserted in the edition of Wood's 'Athenæ Oxonienses,' by Dr Bliss. The Rev. Joseph Hunter edited for the Camden Society in 1840 a volume of 'Ecclesiastical Documents,' containing, in the second part, twenty-one charters from Macro's library, and from a manuscript formerly in his possession there was printed in 1837 for the Abbotsford Club a 'morality' called 'Mind, Will, and Understanding.'
[Bury and West Suffolk Archæol. Instit. ii. 210, 281-7, iii. 375-85; Nichols's Lit. Anecd. ix. 359-65; Nichols's Ulustr. of Lit. vi. 524; Kilvert's Hurd, pp. 10-20, 245; Page's Supplement to Suffolk Traveller, pp. 799-800; Hunter's Hallamshire, ed. Gatty, p. 423; information from the Rev. Dr. Peile of Christ's College, Cambridge.]

This info lifted from the Dictionary of National Biography.

His collection of paintings had been sold in an auction conducted by Dr Macro on 19 and 20 April 1733 and included paintings by James Tillemans, probably a son or other relation, and by Arthur Devis, who, like Joseph Francis Nollekens, was one of Tillemans's pupils.

For more on Cox Macro see - below 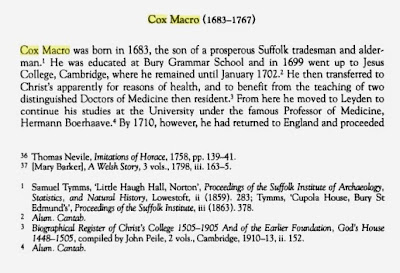 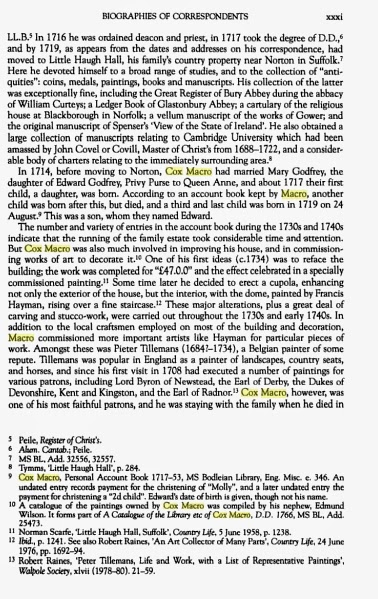 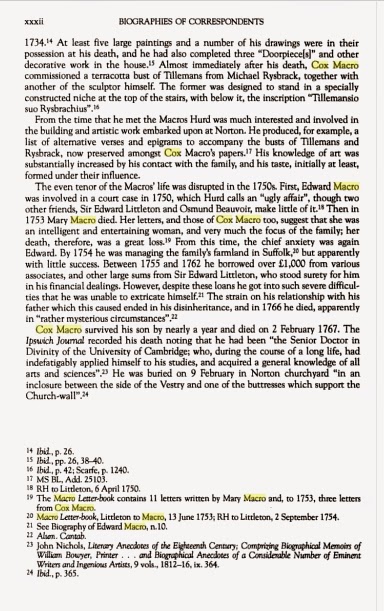 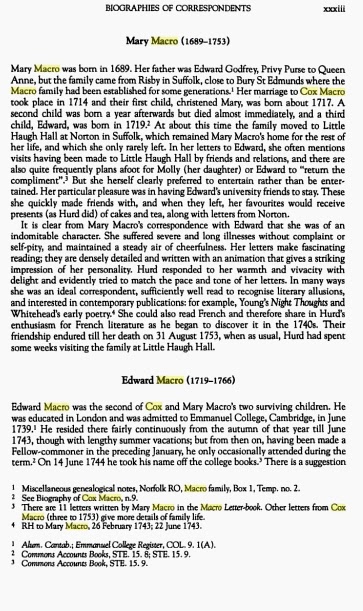 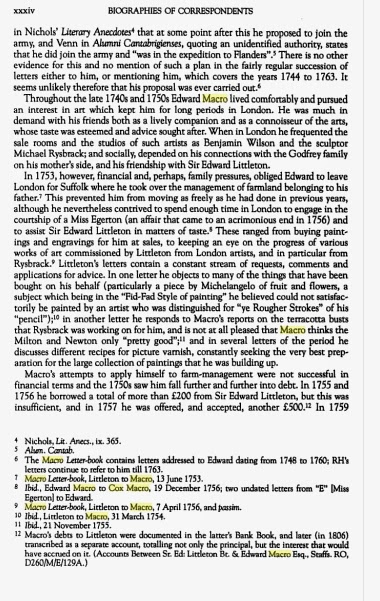 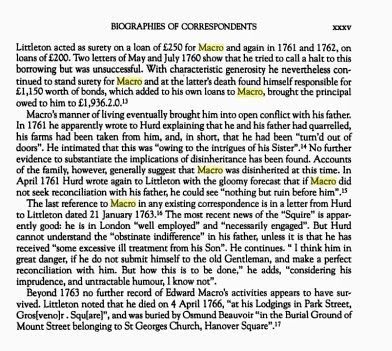 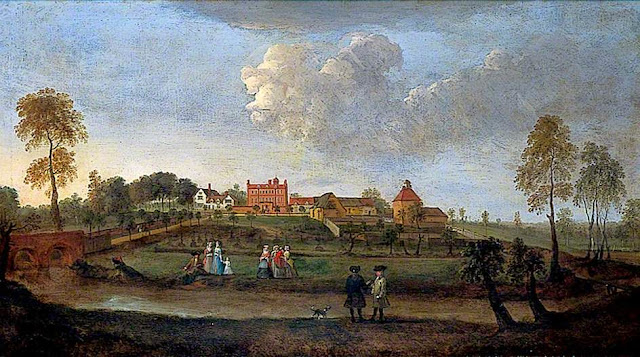 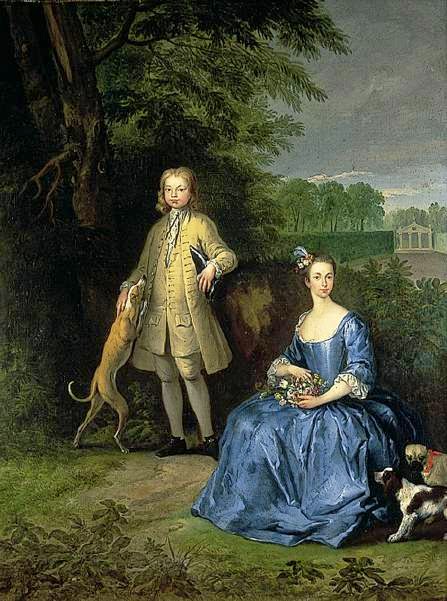 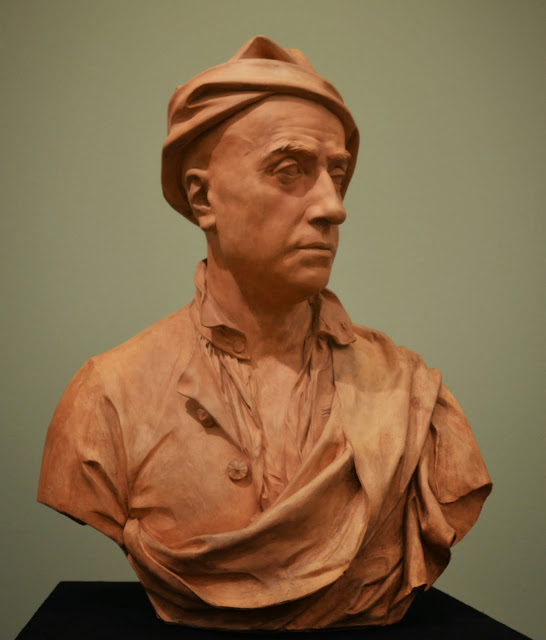 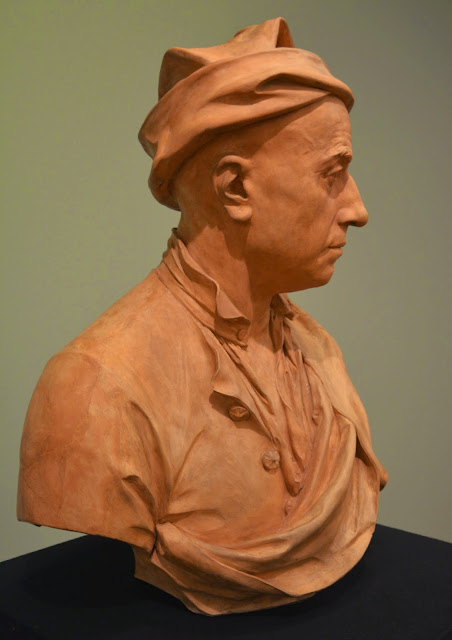 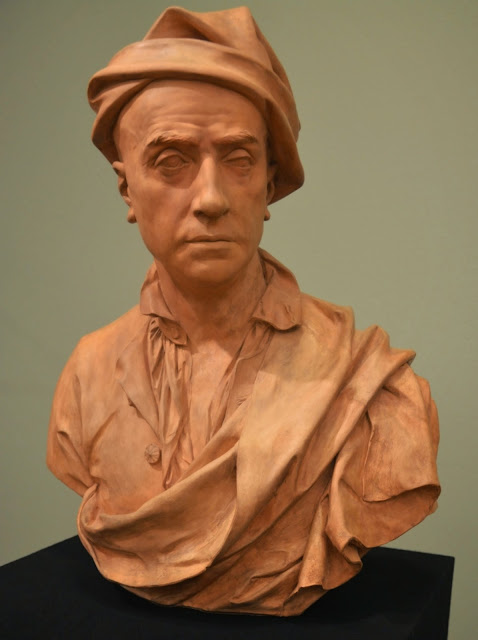 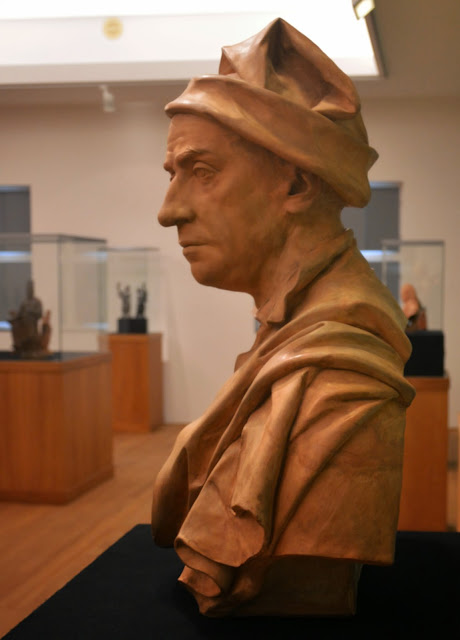 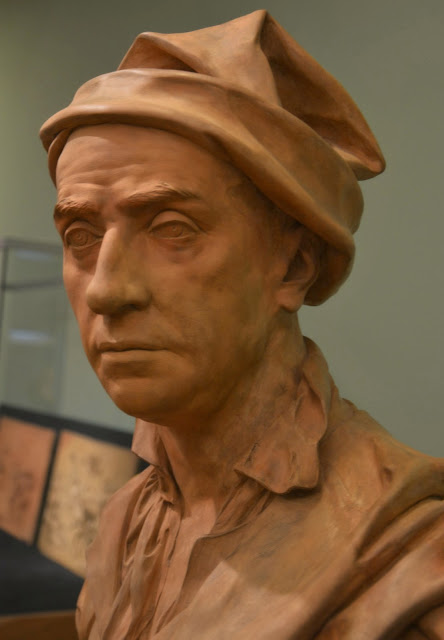 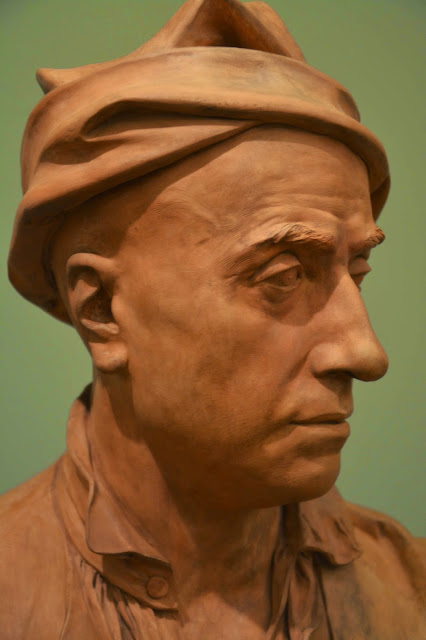 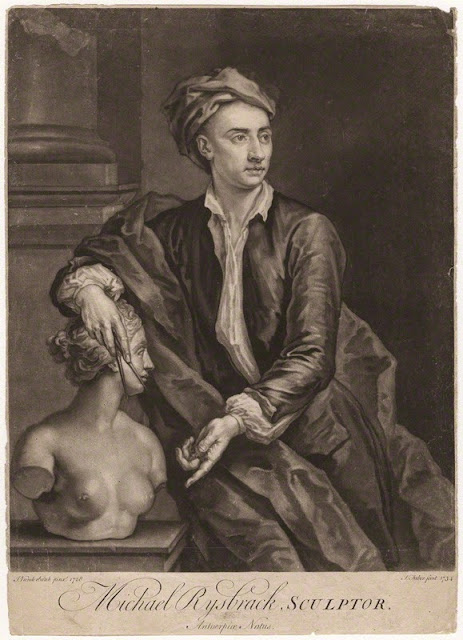 Posted by David Bridgwater at 03:06