Bust of the Architect Isaac Ware (1704 - 66)
by Roubiliac at the National Portrait Gallery.

A good enough reason as any to include these busts at this point in this blog is the similarity in dress of the bust of Ware to that of Handel - one is the reverse of the other. Why did Roubiliac do this - was it showing off? - it cannot have been easy - he must have used some sort of pointing system and reversed all the measurements. 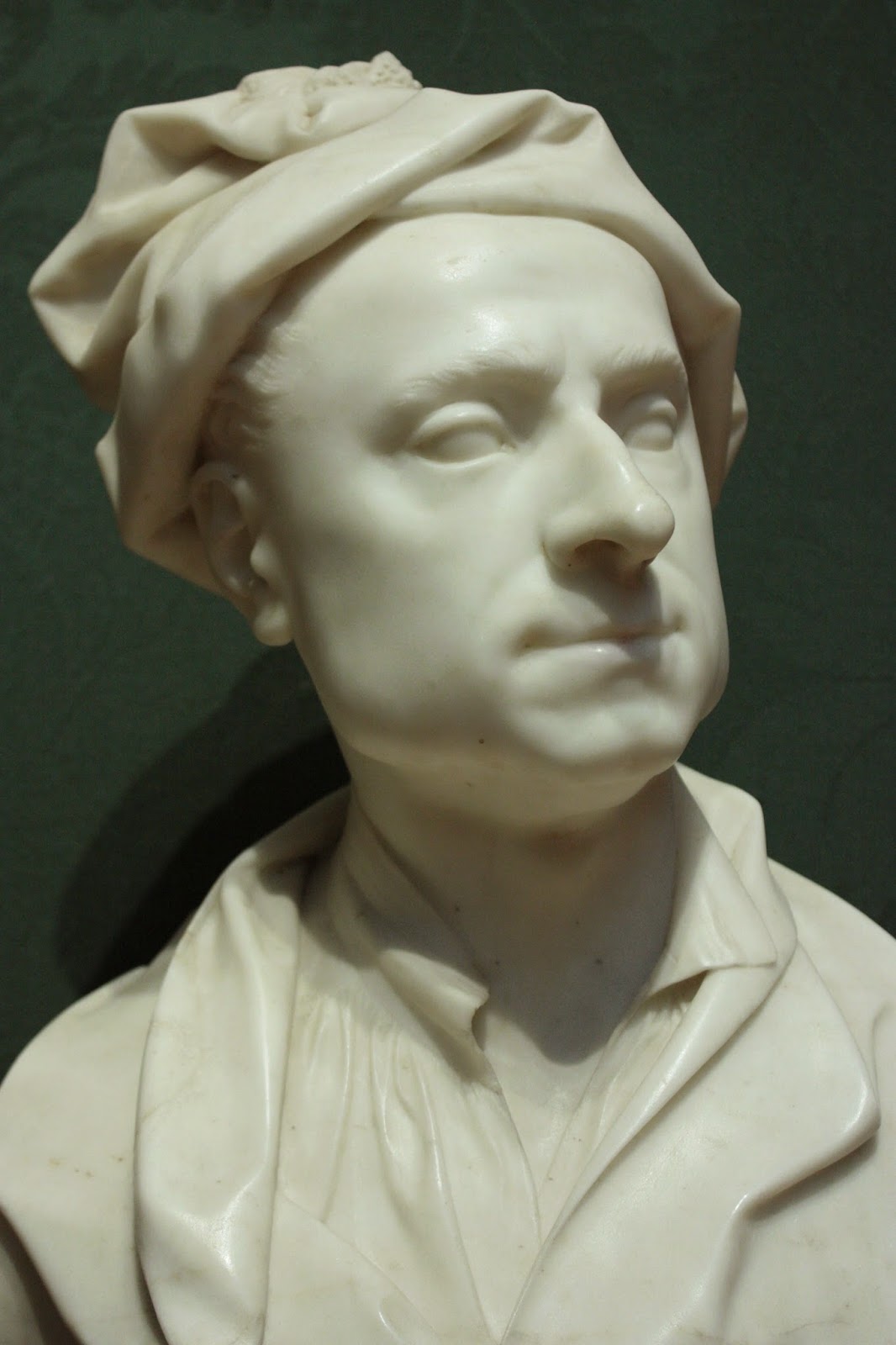 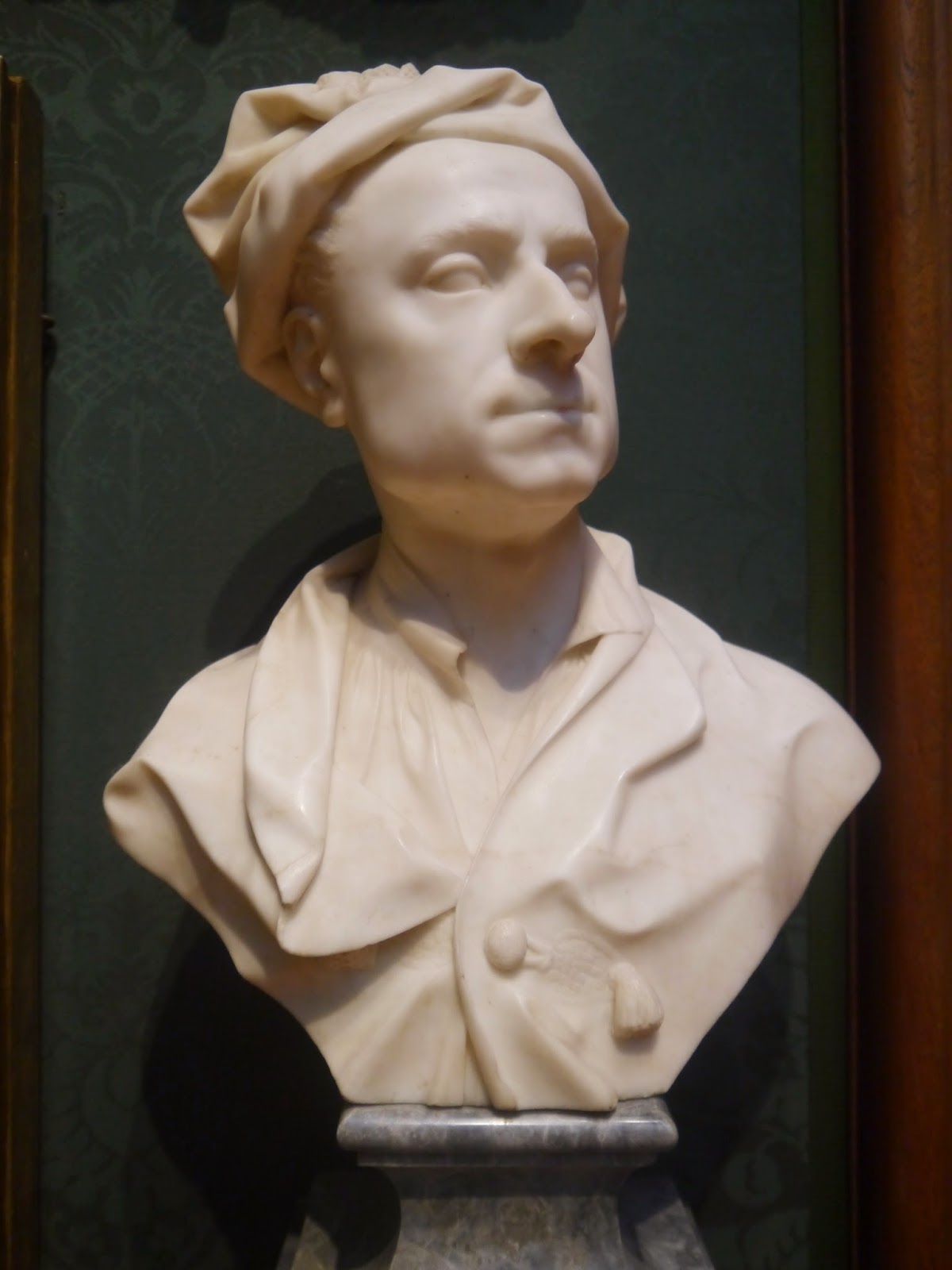 This text below was lifted from NPG Website - Originally published in John Kerslake, Early Georgian Portraits, Her Majesty's Stationery Office, 1977 (and now out of print). The information is out of date - it was written before the purchase of a similar bust by the Detroit Institute of Art originally described in an inventory of 1773 of Sir John Ingilby at Ripley Castle, Yorkshire and by descent to the family of Sir Thomas Ingilby, Ripley Castle until 1987.

Isaac Ware (d.1766)
Architect; of humble origin, sent to Italy to study; on his return closely connected with Lord Burlington's circle; from 1728 Ware held several posts in the office of works, and from 1736 was secretary to the board; built Chesterfield House, 1748-49 (destroyed 1934) and Wrotham Park, Middlesex, 1754, built for the unfortunate Admiral Byng; published The Complete Body of Architecture, 1735, and the translation of Palladio, 1738, dedicated to Burlington; he was a member of the St Martin's Lane Academy. Ware married (1) Elizabeth Richards, by whom he had a son Walter James, and (2) Mary Bolton, by whom there were two daughters. [1]
4982 By Louis François Roubiliac, c.1741
White marble bust, 27 in. (675 mm) high, including grey veined marble socle; head turned to right and tilted slightly, own short hair, pupils not incised, concave cheeks, dimpled chin, square jaw; large cap with tassel, shirt open at the collar, loose coat buttoned at the top.
Incised on the front of the socle in gold capitals: ISAAC WARE.

George Vertue notes, probably after a visit to the sculptor's studio, between 2 June and October 1741: 'Mr. Rubbilac Sculptor of Marble—besides several works in Marble—moddels in Clay. had Modelld from the Life several Busts or portraits extreamly like Mr. Pope. more like than any other Sculptor has done I think Mr. Hogarth very like.—Mr. Isaac Ware Architect Mr Handel—&c and several others. being very exact Imitations of Nature—'. [1] Both terra cotta and marble busts of Pope (q.v.) and Handel (q.v.) survive, but of Hogarth only a terra cotta (q.v.) is known. Vertue does not specify what he saw of Ware, but the wording strongly suggests a sitting. Roubiliac would first have taken a clay or clays ad vivum which was probably fired subsequently. A mould was in Roubiliac's sale, possibly indicating the production of a plaster cast, but no clay or terra cotta is now known. The NPG portrait is the only extant version. On stylistic grounds it is unlikely to have been made late in Roubiliac's career.

A marble bust of Isaac Ware is mentioned in an 1861 [6] inventory of Buckland House and in 1912 under the heading 'Staircase and Hall'. Major Wellesley's grandmother, Lady Fitzgerald, wife of Sir Maurice Fitzgerald, 20th Knight of Kerry, acquired Buckland House and some furniture from the Throckmortons in 1908; [7]NPG 4982 may thus have descended in the Throckmorton family. An expensive object like a marble bust is not likely to have been commissioned by the sitter. The obvious patron is Chesterfield, or perhaps Byng. However there seems to be no record of NPG 4982 in such ownership, and a connection with the Throckmortons is not apparent.

Iconography
The only other portrait is the oil attributed to Soldi in the RIBA. This probably dates from c.1754 as it shows an elevation of Wrotham Park, which is seen in construction in the background. It includes one of the sitter's two daughters or possibly his second wife. [8]

Bust of Isaac Ware at The Detroit Institute of Art. 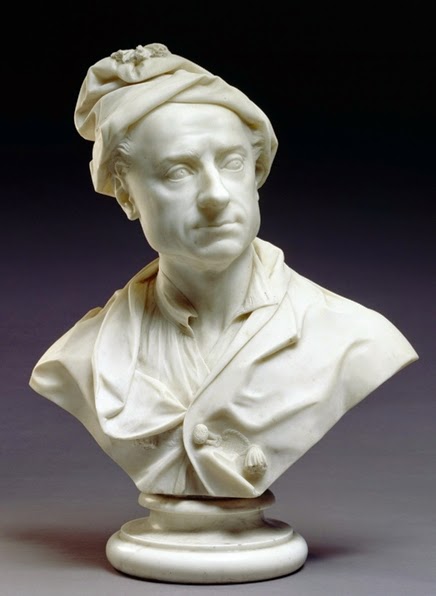 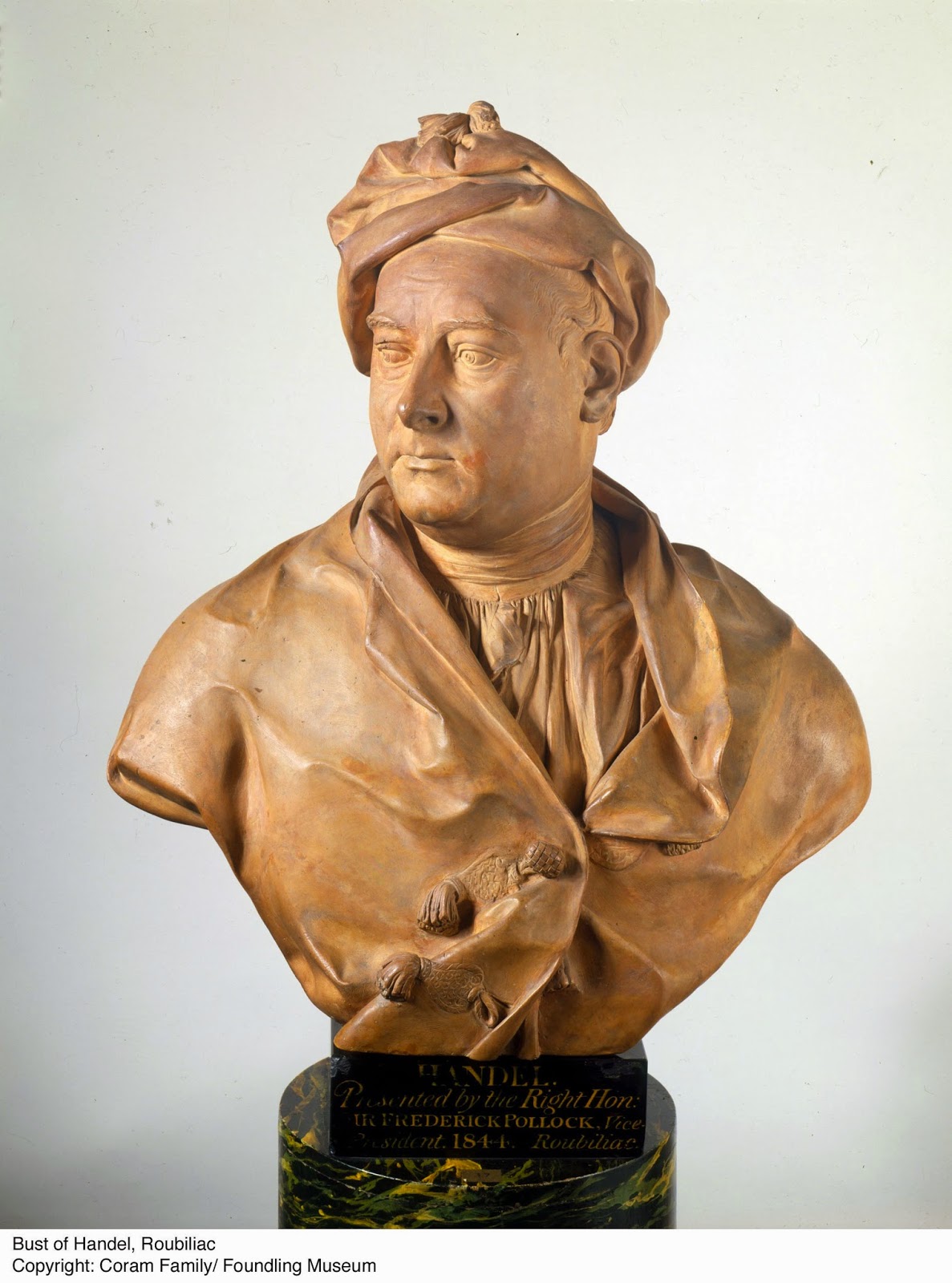 Terracotta bust of Handel at the Foundling Museum shown here to illustrate the use of the same coat but reversed. 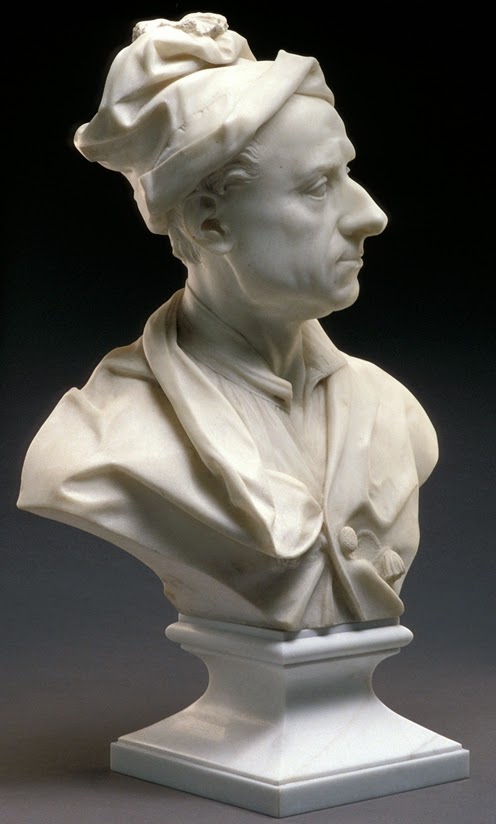 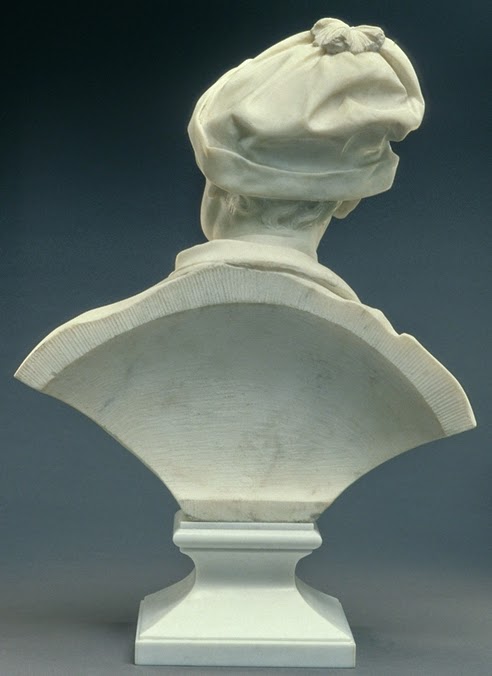 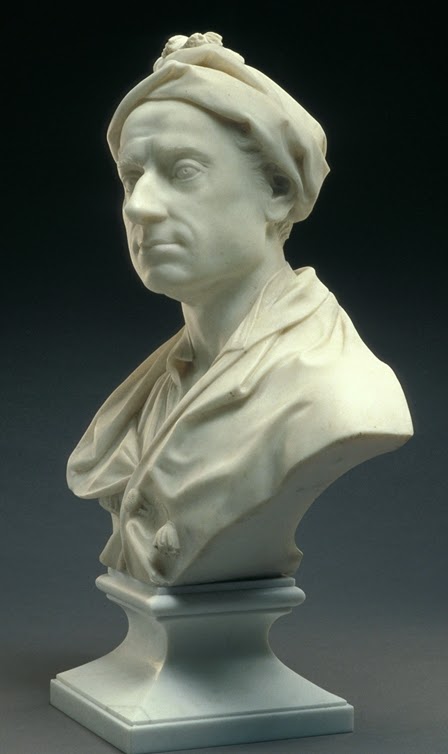 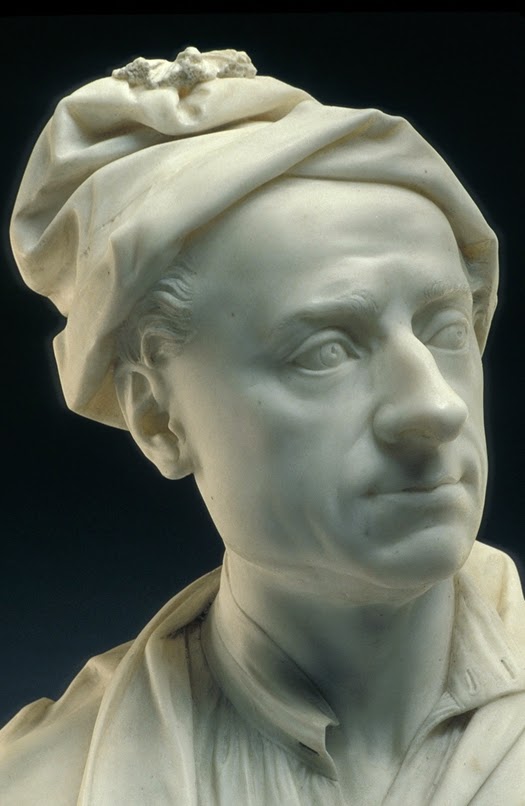 Originally described in an inventory of 1773 of Sir John Ingilby at Ripley Castle, Yorkshire and by descent to the family of Sir Thomas Ingilby, Ripley Castle until 1987. Sold by private treaty to the DIA. Eyes Incised. 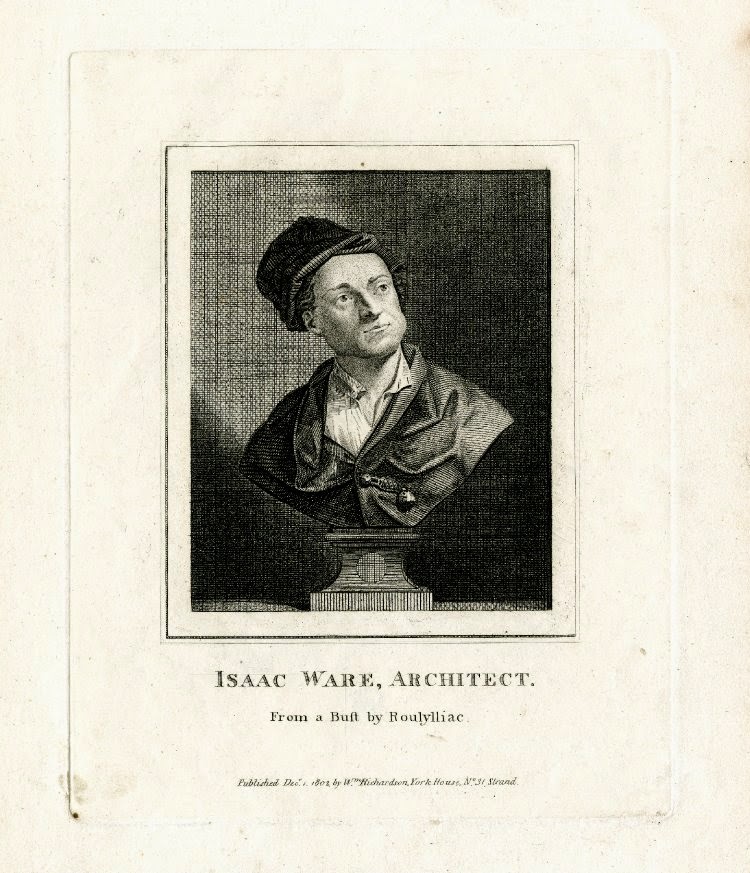 Engraving of 1806 of a bust of Isaac Ware by Roubiliac. J.T. Smith (unsigned), published J. Richardson, 1802, 'From a Bust by Roubylliac' and issued in Illustrations for the Rev. Mr. Lyson's Environs of London, 1811 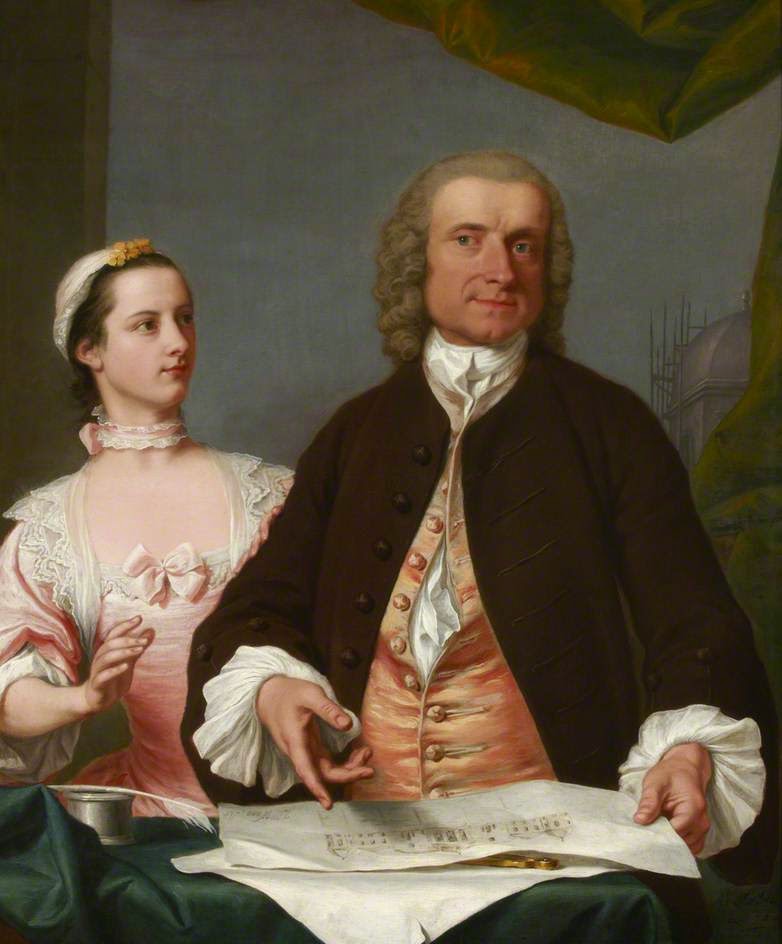 Isaac Ware (1704–1766) was a protégé of Lord Burlington and a leading member of the second generation of Palladian architects who combined elements of the rococo in their work. The architect holds his design for Wrotham Park, Middlesex, made for Admiral John Byng. The girl is almost certainly his youngest daughter Mary, who stayed with him until his death.

Isaac Ware's principal works included Chesterfield House, Mayfair (1748–1749) and Wrotham Park, Hertfordshire (1754), while he is most remembered for his publication 'The Complete Body of Architecture' (1756) and his scholarly translation into English of Andrea Palladio’s 'Four Books of Architecture' (1738).
Andrea Soldi, though originally from Florence, began his career as a portrait painter working for British merchants in Turkey. He arrived in London in 1736 and was an immediate success but an extravagant lifestyle led to the debtors prison in 1744 and his career never really recovered.