Anne-Marie Fiquet du Boccage, and a Bust of Alexander Pope

Her name can be spelt with either a single or double C. 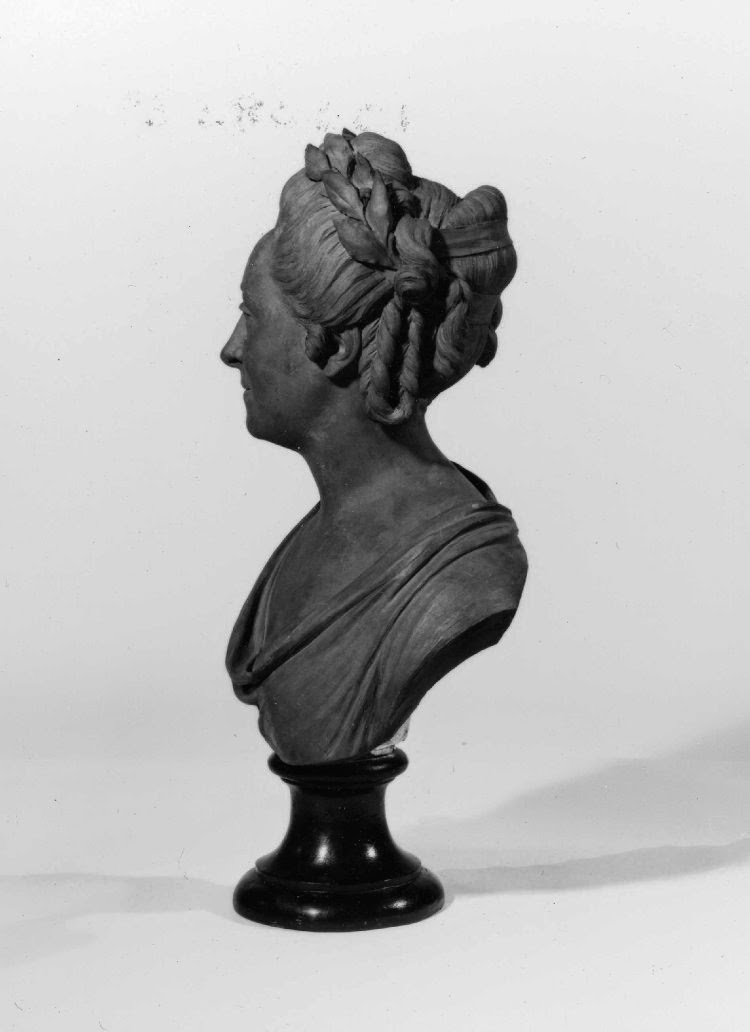 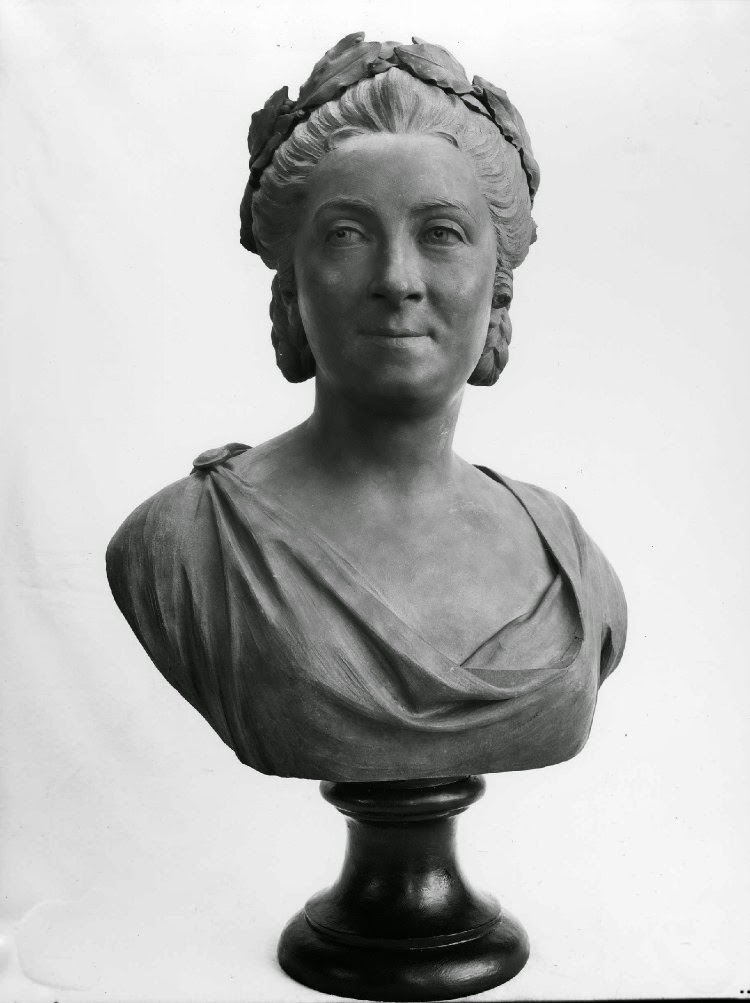 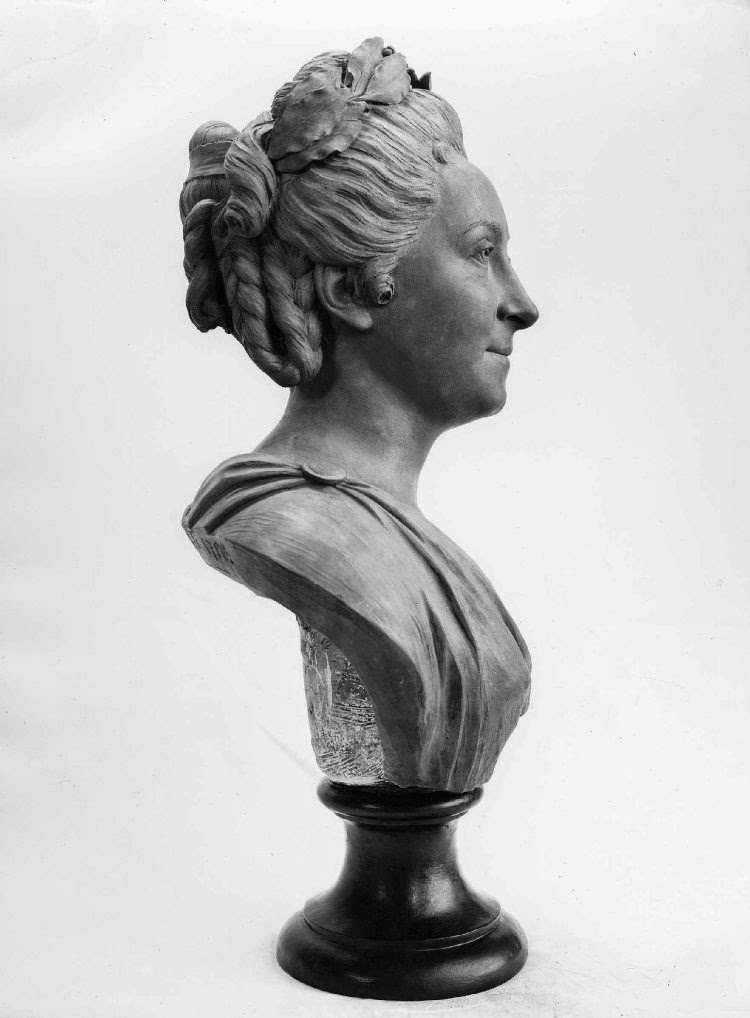 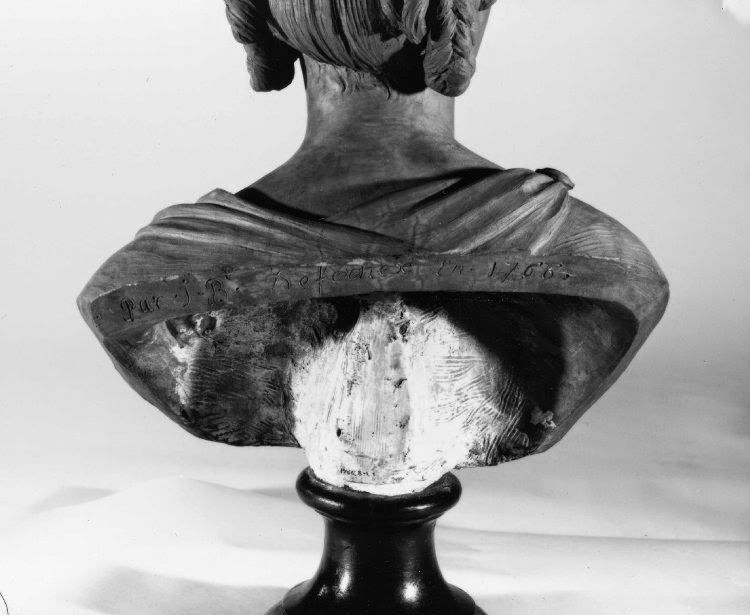 Her bust in the British Museum and depicted here is described as a terracotta portrait bust of Anne-Marie Le Page, Madame Fiquet du Boccage (1710-1802) by Jean-Baptiste Defernex (1728-83), her head turned slightly to right wearing a classical-style gown with a brooch at the shoulder and a laurel wreath in her elaborately dressed hair. It was reported that Voltaire had crowned her with laurels at an entertainment at Ferney - although his motives were questioned. Traces of surface paint, it is probably hollow, on a turned and waisted tapering socle, dated 1766. H. 60.2cms width 37cms. She would have been 56 years old, She was described by admirers as Forma Venus, Arte Minerva, Voltaire called her the Sappho of Normandy.

At the age of 17 she married Pierre - Joseph Fiquet du Boccage (died August 1767), something of a poet and translator with a special interest in English literature. After 1734 they spent 8 months of the year in Paris holding a literary salon once a week at Rue de La Sourdiere attracting international intellectuals. A proto feminist she wrote the play Les Amazones performed in 1749. Her poetry included a version of Earthly Paradise imitating Milton of 1748, she translated Alexander Pope's Temple of Fame in 1749. In 1756 she published Le Columbiadne which could also be seen as early feminist literature. Her letters to her sister were published as Letters concerning England Holland and Italy in England in 1776. 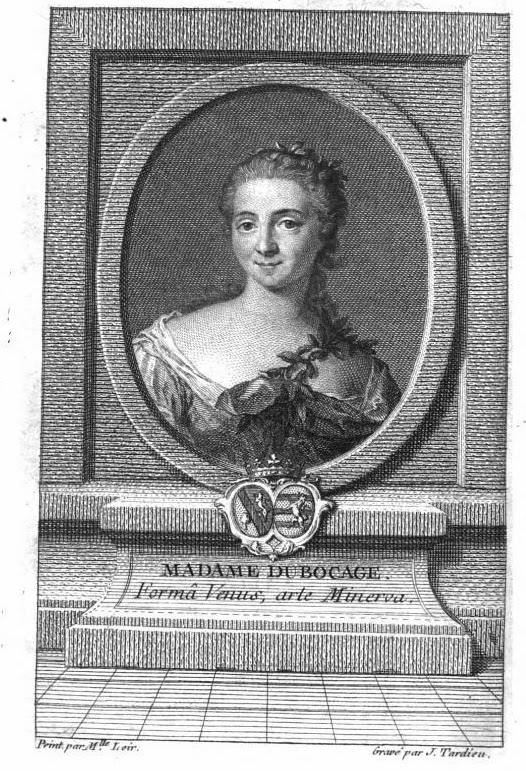 In Memoires Secrets de Bechaumont first published in London fro 1783 - 89, it is suggested that Dr Matthew Maty (1718 -76) was responsible for adding this bust to the British Museum Collection. 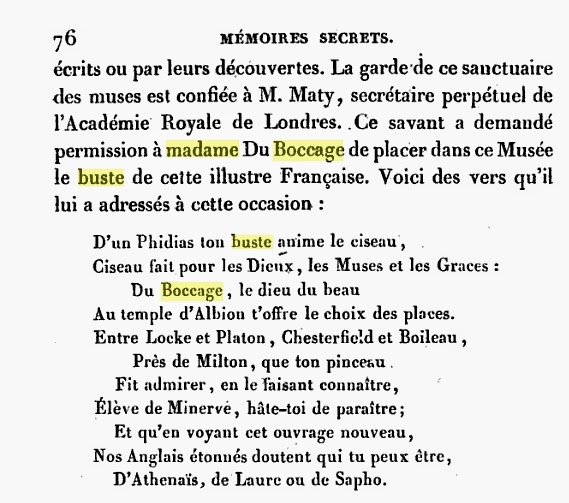 Matthew Matey was also responsible for presenting to the British Museum the 17 busts by Roubiliac, bought at the posthumous sale by Langfords of the contents of the Roubiliac studio in St Martin's Lane.
He later became chief librarian - Matthew Maty was of Huguenot extraction, his family having moved from France to the Netherlands. He had trained as a doctor at Leiden University and moved to London in 1740. He practised as a physician but also moved in literary circles, he founded the Journal Britannique in 1747 and falling out with Dr Samuel Johnson, who in 1756 described him as “that little black dog!”


Madame Boccage corresponded with Lord Chesterfield in 1750-52 and twelve of his letters to her were published by Dr Matthew Maty in Miscellaneous Works of the late Philip Dormer Stanhope, Earl of Chesterfield: consisting of letters to his friends, never before printed, and various other articles. To which are prefixed, memoirs of his life, tending to illustrate the civil, literary and political history of his time, 2 vols, London, 1777, vol. II, pp.242-81, letters LXXXV-XCVI.

14 June 1750 - replying to her asking for a bust of himself he tells her that he will be sending her busts of Pope and Milton.

20 May 1751 - He is sending four ambassadors, Shakespeare, Milton, Dryden and Pope.

7 November 1751 - the bust of himself should arrive at Dieppe on the first good wind.

Chesterfield had asserted that "Roubiliac only was a statuary, and all the rest were stone cutters" from The Gentleman's Magazine, Vol 53 Jan. 1783


Jean-Baptiste Defernex(6) was born in the parish of Saint-Nizier, Lyon, on 26 January 1728. He worked for his father, a master card-maker, who used carved wooden moulds. His earliest known dated work is a signed bronze bust of the duc de Valentinois dated 1750 in the Bibliothèque Mazarine, Paris.(7) A terracotta bust of Mademoiselle Marie Anne Botot d'Angeville is in the Museum of Fine Arts, Boston.(8) It too is signed and bears the date 1752. In 1754 and 1755 Defernex was working for the Vincennes/Sèvres factory on models for small-scale sculpture in biscuit and glazed porcelain.(9) On 17 October 1760 he was admitted to the Académie de Saint-Luc and exhibited in the Salons of 1762 and 1774. In the 1777 Almanack des artistes he was described as 'sculpteur statuaire de Mgr le duc d'Orléans'. He had been linked to this powerful family since at least 1763 when he supplied decorative elements for the staircase for the Palais Royal through the architect Contant d'Ivry. Defernex is best known for his portrait busts in bronze, marble and terracotta, and for his petite sculpture in biscuit porcelain for Sèvres.

She wrote to her sister

Horace Walpole wrote - There is come from France a Madame Bocage, who has translated Milton: my Lord Chesterfield prefers the copy to the original; but that is not uncommon for him to do, who is the patron of bad authors and bad actors. She has written a play too, which was damned, and worthy my lord's approbation.

Footnote - Madame du Boccage published a poem in imitation of Milton, and another founded on Gesner's "Death of Abel." She also translated Pope's "Temple of Fame;" but her principal work was "La Columbiade." It was at the house of this lady, at Paris, in 1775, that Johnson was annoyed at her footman's taking the sugar in his fingers and throwing it
into his coffee. "I was going," says the Doctor, "to put it aside, but hearing it was made on purpose for me, I e'en tasted Tom's fingers."

Mrs Thrale Letter in the Rylands Library - Mrs. Thrale is  occasionally  very  severe on the French!
This appears in  her account of a visit to dine with Madame de Bocage on October 5th 1775 :


" The Morning was spent in adjusting our Ornaments in order to dine with Madame de Bocage at 2 o'clock.  There was a showy Dinner with a Frame in the middle, and she gave us an English Pudding made after the  Receipt of  the Dutchess of  Queensbury.  We saw nothing particularly pleasing at this Visit but the beauty of Madame de Bocages niece, the Countess of Blanchetre, whose husband was so handsome too that being a Frenchman - I  wonder'd.  In the course of  conversation, however, he turned out an Italian, and  there was another Italian Noble - man who hailed Baretti and made himself agreable to us  all.  Nothing would serve him but attend us at night to the Colissee which, after leaving our Names with the Sardinian Ambassadress, we were willing  enough to permit.  In Madame de Bocage's Drawing room stood the Busts of Shakespear, Milton, Pope and Dryden, the lady sat on a Sopha with a fine Red Velvet Cushion fringed with gold under her Feet and just over her Head a  Cobweb of  uncommon  size & I am  sure  great Antiquity.  A Pot to spit in, either of  Pewter or Silver quite  as black & ill-coloured, was on her Table, & when  the  Servant carried Coffee about he put in Sugar with  his Fingers.  The House these people live in is a fine one but so contrived that we were to pass through  a sort of Hall where the Footmen were playing at Cards before we arrived at Madame's Chamber." 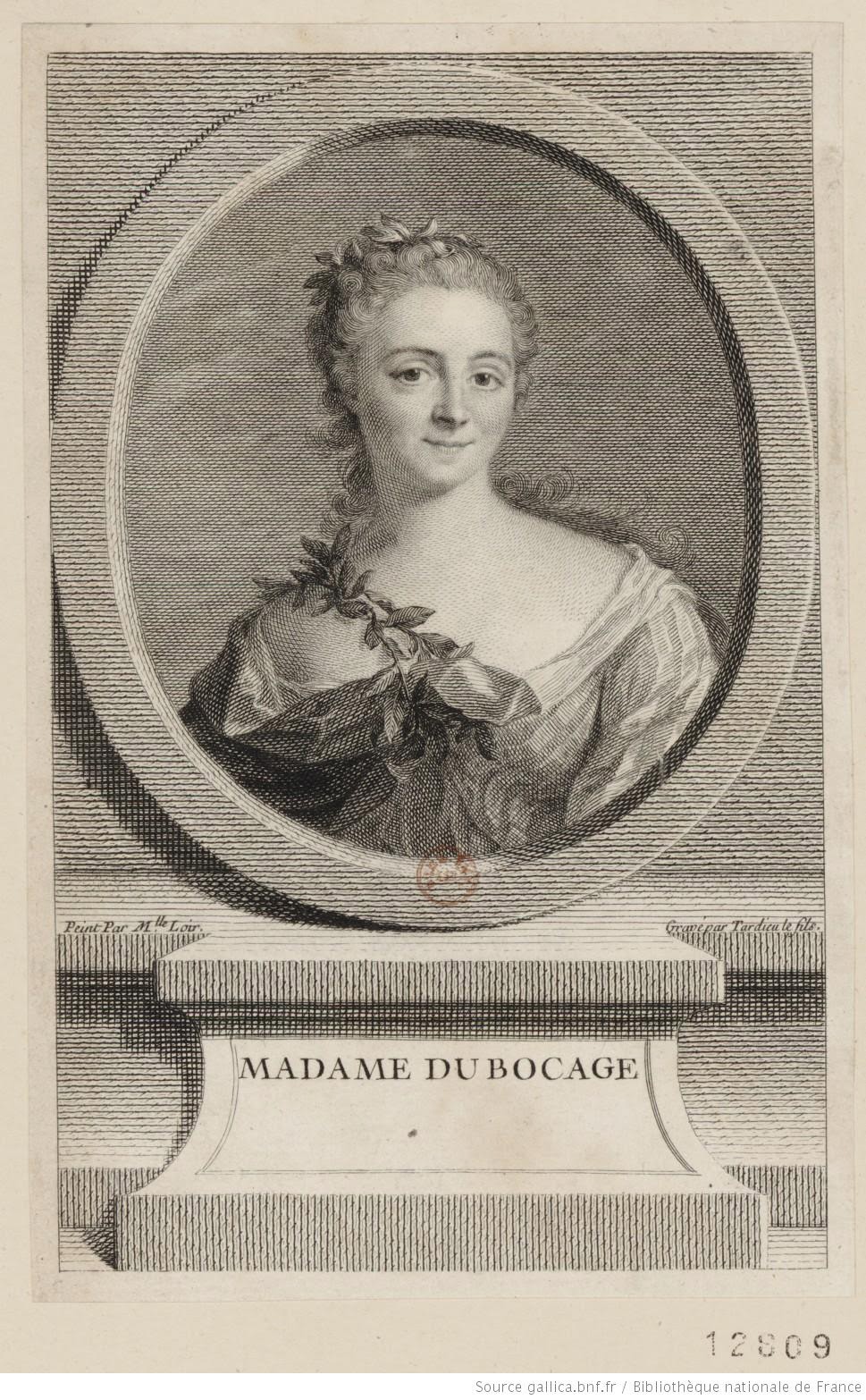 Painted by Marieanne Loir, engraved by Tardieu c. 1745. There are several other later engraved portraits of Madame Boccage, but they are all inferior versions of this engraving. 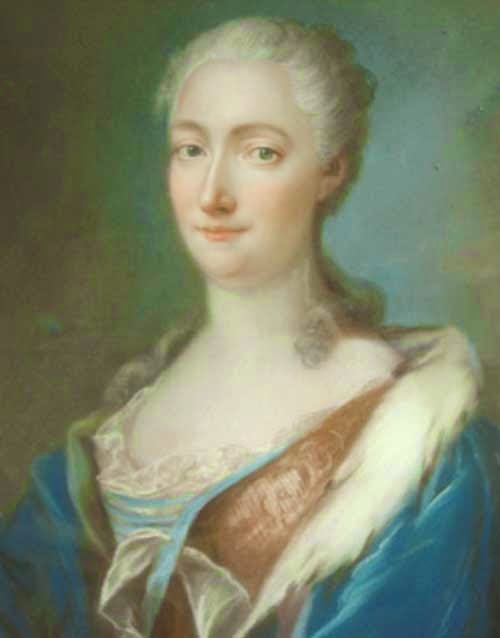 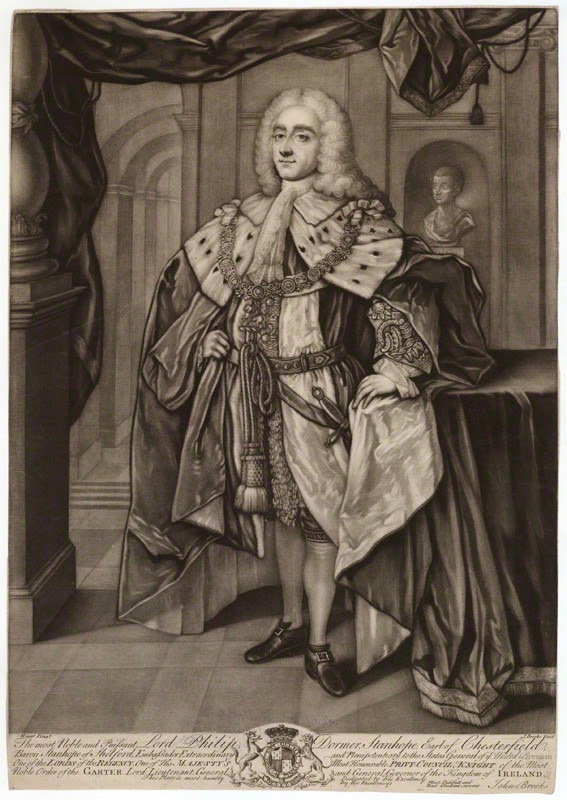 Intriguing representation of a bust behind him is this Alexander Pope or the bust of Chesterfield by Hoare  ? 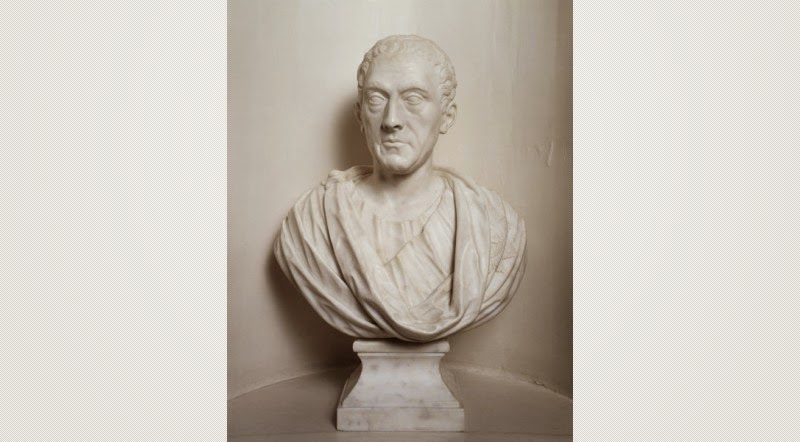 Posted by David Bridgwater at 04:39