A Drawing attributed to Thomas Chippendale the Elder

recently purchased by the Chippendale Society. 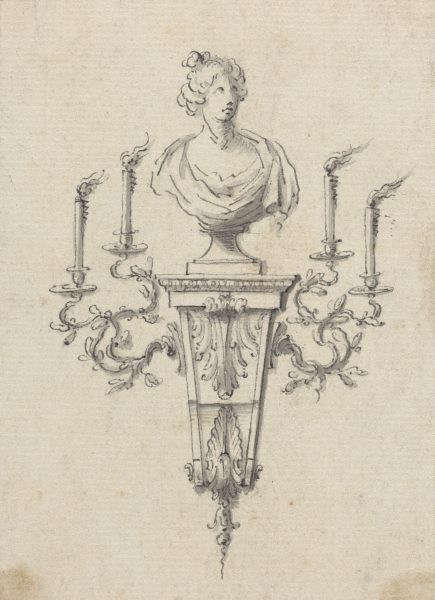 Drawing for a bracket for a bust, with candle branches,

The drawings were bought from London dealer Thomas Heneage and came originally from an album of drawings in a collection in Canada.

The album bore the bookplate of Alexander Manning (1819-1903), an Irish immigrant who had arrived in Toronto in 1834. A carpenter by training, he became one of the most successful builders and property developers in Toronto and was also active in local politics, serving twice as mayor in 1873 and 1885. In later life he became a philanthropist and patron of the arts, but the drawings presumably relate to his professional interests as a builder.

It is not known how Manning acquired the drawings, and their provenance prior to his ownership is unknown, but confirmation of their link to Thomas Chippendale is provided by the drawing for a lantern pedestal, which is the design drawing for a set of six supplied to Harewood House in 1774.

Posted by David Bridgwater at 11:24