The Roubiliac Bust of Thomas Winnington (d. 1746).
On the Monument at Stanford, Warwickshire.

With a few notes on the monument and busts of Sir Andrew Fountaine, the monumen to John Merick and the monument of John Bamber, The Monument attributed to John Cheere, the bust by Roubiliac.

Winnington's Bust has the same drapery as Roubiliac's busts of Sir Andrew Fountaine, and the bust on the monument to John Bamber at Barking.

Malcolm Baker suggests  the monument possibly by Benjamin Palmer.
see Church Monuments Society Journal vol X, 1995.
Bakere also points out the similarities of the feet supporting the sarcophagus to those on the monument to John Merrick in Norwood Church - it should also be pointed out that they are also very close to those on the monument of John Bamber in St Margarets Church, Barking (see photograph below).

A letter of the 22 February 1749/50 in the Lewis Walpole Library that was discovered by Todd Longstaff Gowan, from Henry Fox to Charles Hanbury Williams who had the monument erected.
The letter asks that Hanbury Williams retainer Richard Evans should:

"write a line to Mr Eckar (John Giles Eccardt - see image below) to deliver your picture of Mr Winnington done by Vanlo to my order. from that and Goussets (Isaac Gossett) Bas Relive of him Rouvilliac is to make a bust which may be plac'd upon a monument something like that set up to the primate Boulter (by Henry Cheere) in Westminster Abbey. You please to write in verse or prose or both shall be there inscribed, and I beg you will intend to do it now whilst You are at Colbrook".

This confirms that Roubiliac sculpted this bust using the portrait and a wax relief by Isaac Gosset.

This wax relief appears to have remained with Roubiliac and was put up for auction (Mr Winnington in Wax) at the posthumous sale of Roubiliac First day, Lot 68.

Although by no means clear this suggests that there was a link between Henry Cheere and Roubiliac as contractor and sub contractor.

Information above from the Roubiliac and Cheere in the 1730's and 40's Collaboration and subcontracting in 18th Century English Sculptors' Workshops by Malcolm Baker in the Church Monuments Society Journal Vol X. 1995.

The Boulter monument in Westminster Abbey by Henry Cheere. 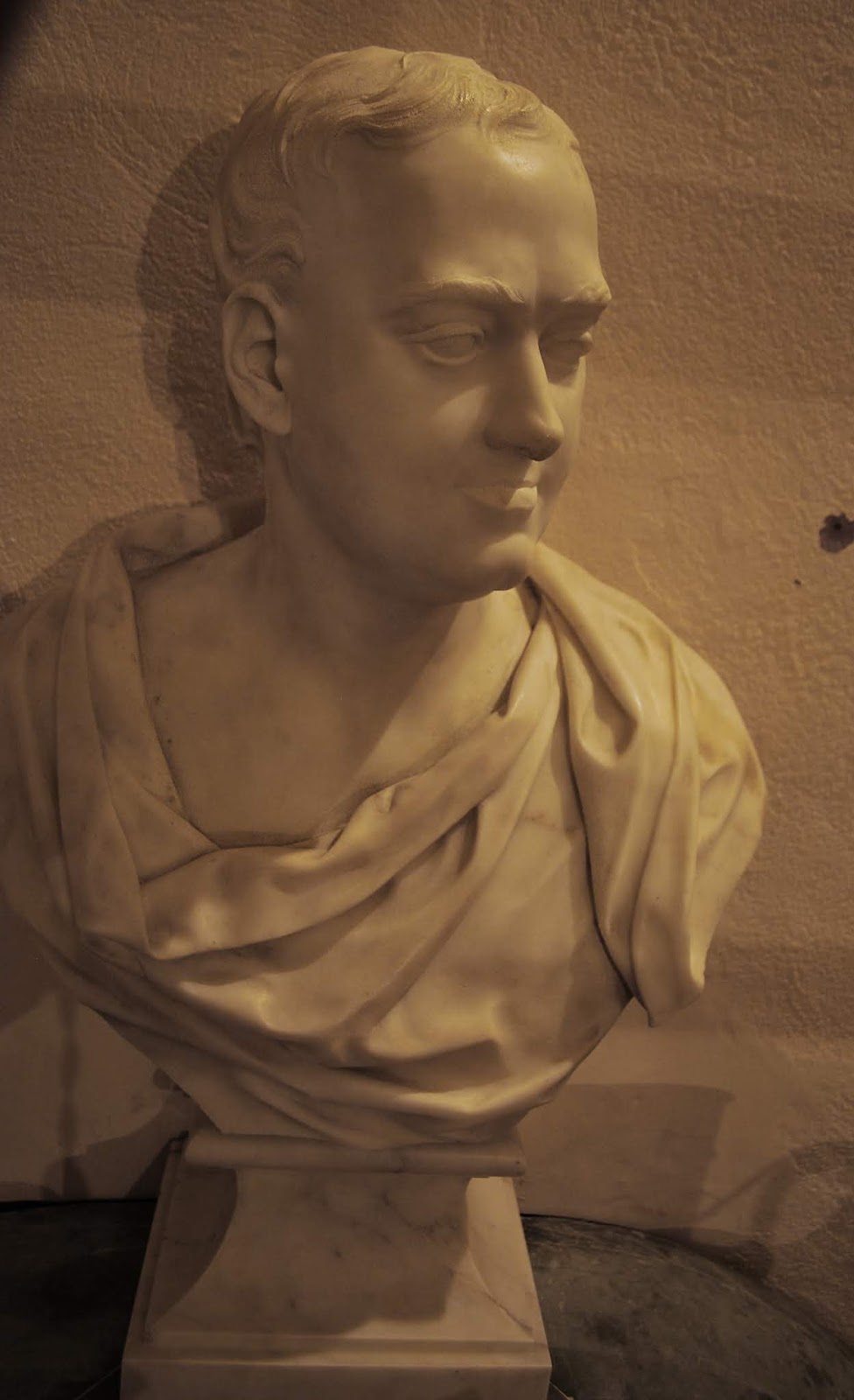 Thomas Winnington
Louis Francois Roubiliac
Marble Bust
The drapery on this bust was used by Roubiliac on his busts of Andrew Fountaine - Terracotta now in Norwich castle Museum, Marble at Narford church, another marble at Wilton House, a plaster bust at Yale Centre for British Art, and another plaster in a private collection in Cambridge.
see photographs of the Winnington monument below.

I will post again in more depth on these busts once I have photographs of the Roubiliac Marble busts at Wilton House. 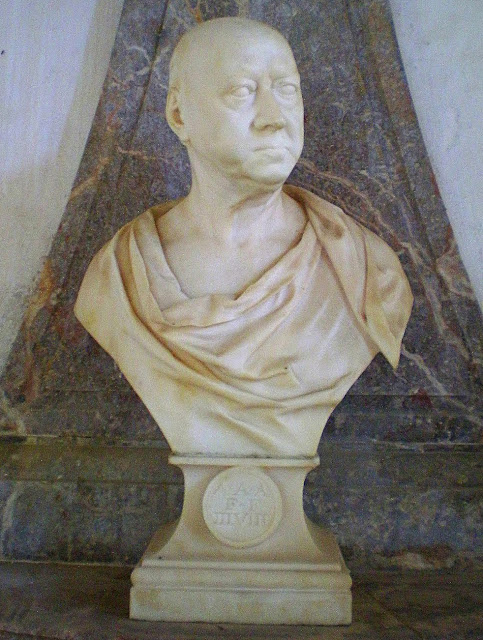 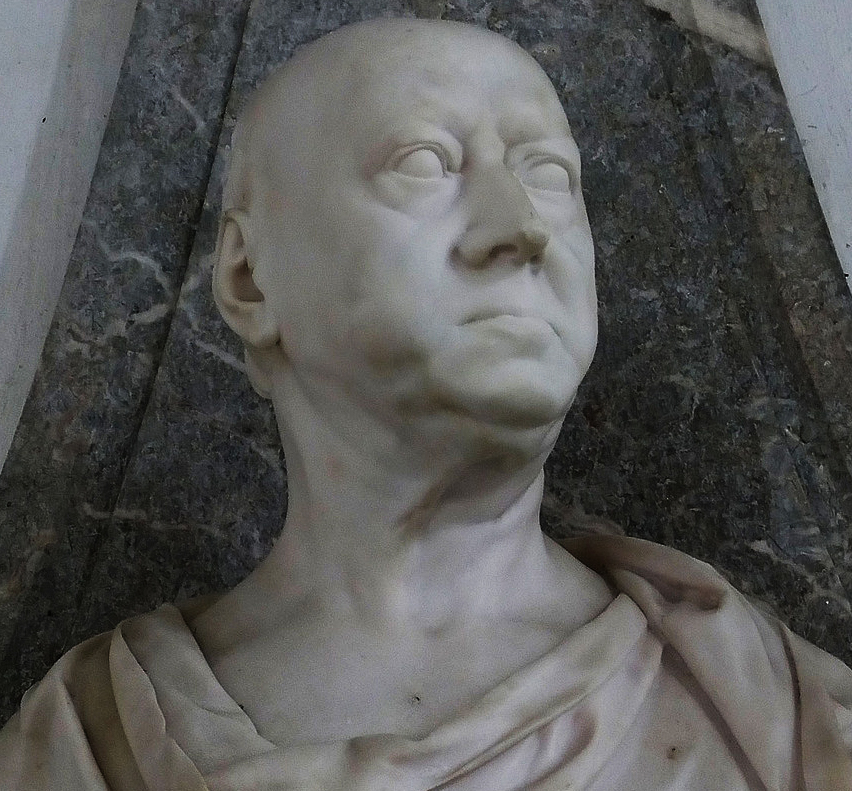 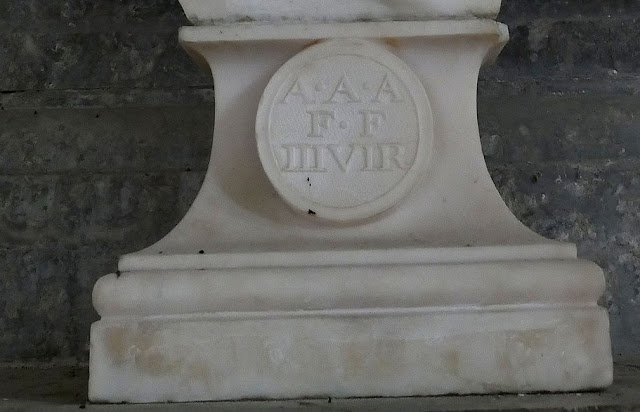 Bust of Andrew Fountaine on the Monument at Narford Church, Norfolk.

Perhaps a replacement - this needs to be confirmed.

The 1753 inventory of Narford described the marble bust as ‘the highly finished Busto in marble of Sir Andrew Fountaine, done after the life and very like him by Roubiliac.’

The inventory also recorded Roubiliac’s terracotta bust, the source for the marble versions, which was acquired from the Fountaine collection by Norfolk Museums Service in 1992.

The Narford monument is signed by the little known N. Powley of Wells by Sea.

On 9th July 1757 The Norwich Mercury reported - We hear from Wells that last week was erected in the Parish church of Narford in this county a monument to the memory of Sir Andrew Fountaine consisting of various colour'd marble with a swelling statuary tabled and ornamented with the bust of Sir Andrew, upon the top of a pyramid highly finished is a statuary urn in a chased antique manner. The whole polished and completed to entire satisfaction by John Powley of Wells next the Sea.

Harris Powley is noted in an advertisement in the Norwich Mercury 6 April 1776 as a stonemason of Wells next the Sea  making marble, Portland stone and freestone chimney pieces, monuments tombs and gravestones.

At the Church of All Saints, Sculthorpe, Norfolk, on the South West external wall of the church there are two  mural monuments to members of the Matthew family. Both set under a triangular pediments. One is inscribed Powley, which must be Harris the son of John Powley, as the latest date is 1786, and John Powley had died at Wells in 1774. (facts need checking).

The Monument to Thomas Winnington.

"Stanford – a parish in the hundred of Doddingtree, upper division, 8 ½ miles W.S.W. from Stourport, and 122 from London. The church, which was erected in the year 1768, is a handsome Gothic structure, with an elegant tower built of stone dug out of a quarry close by, which was discovered just as the foundation of the church had been laid; the interior is neatly fitted up, and contains several monuments of the Winnington family, one of which is ornamented with a bust of the Right Hon. Thomas Winnington, formerly M.P. for Winchester, Lord of the Admiralty, and paymaster-general of the forces, &c. He died in 1746".

From - Worcestershire Delineated by C. and J. Greenwood pub.1822. 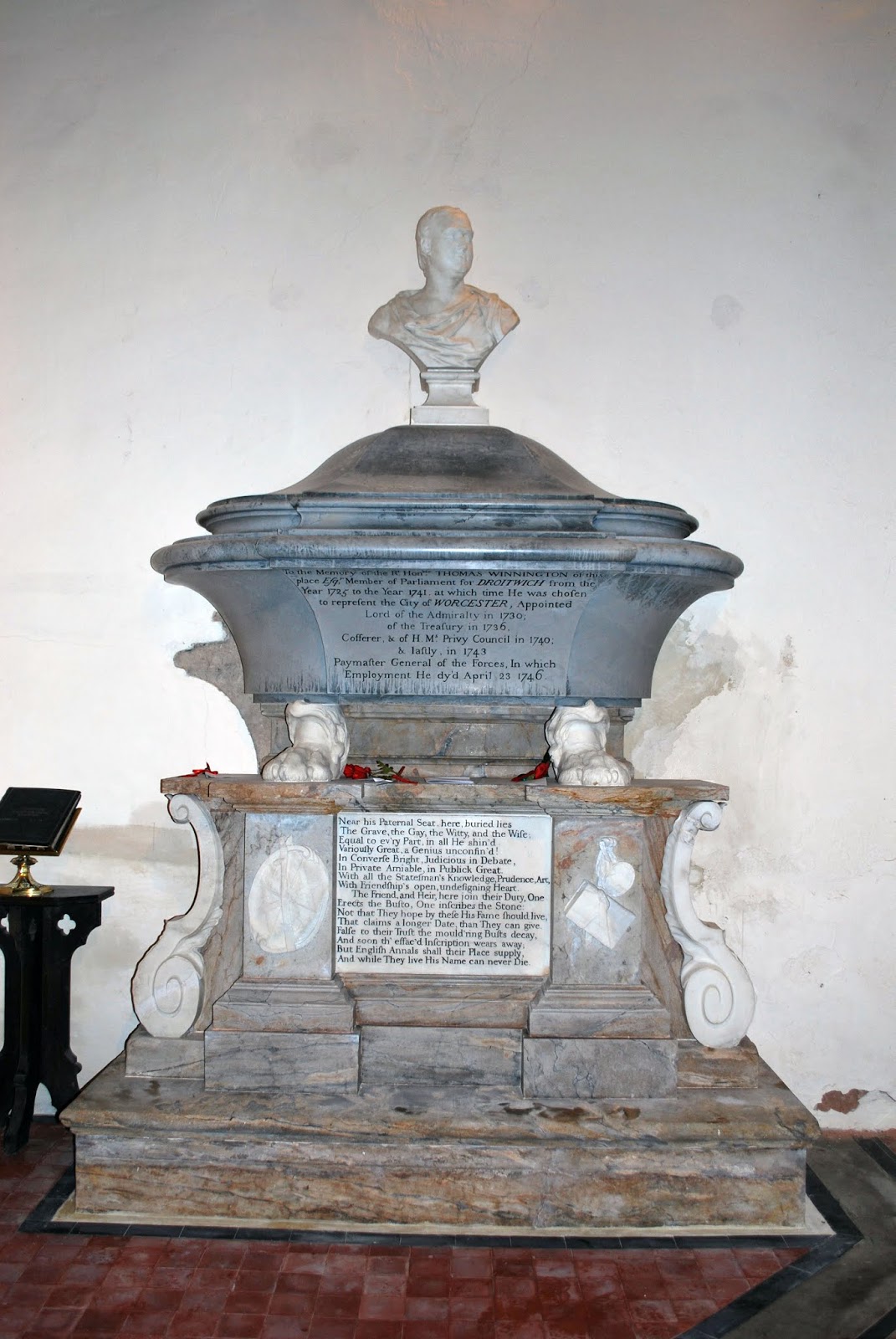 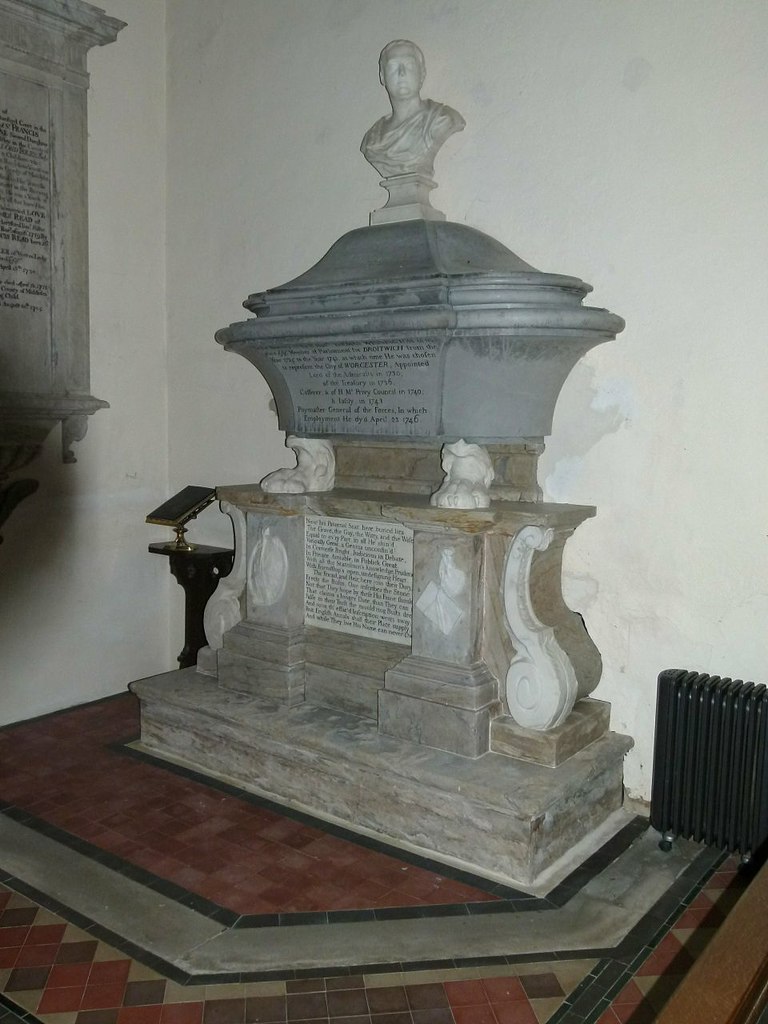 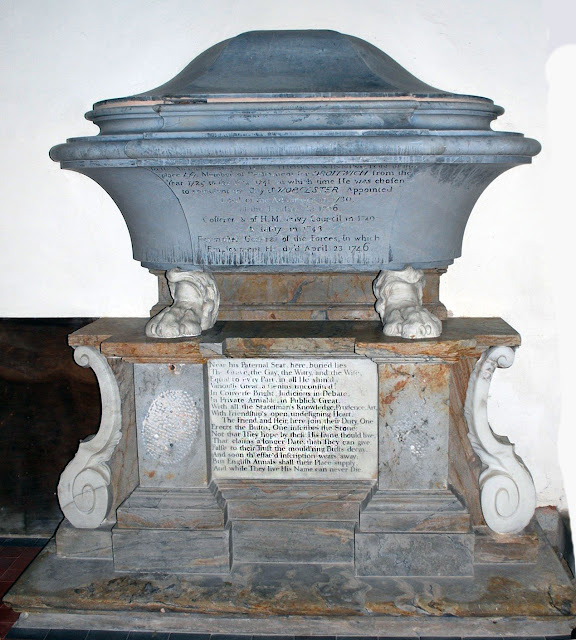 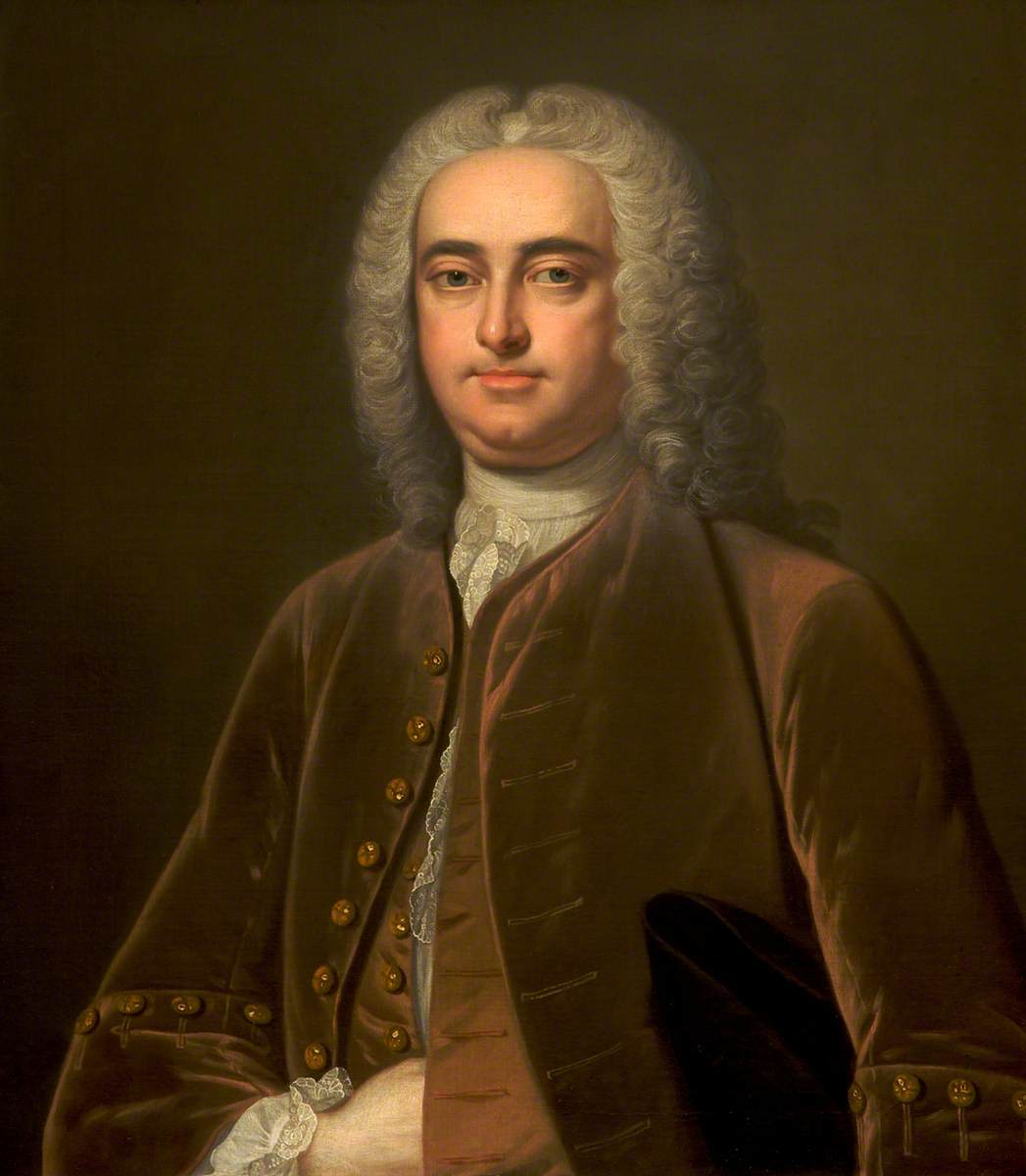 On loan to the National Trust at Lyme Park, Cheshire from Mr N Hanbury - Williams.

Included here because the style of the lions paw feet matches those of the Winnington Monument above. 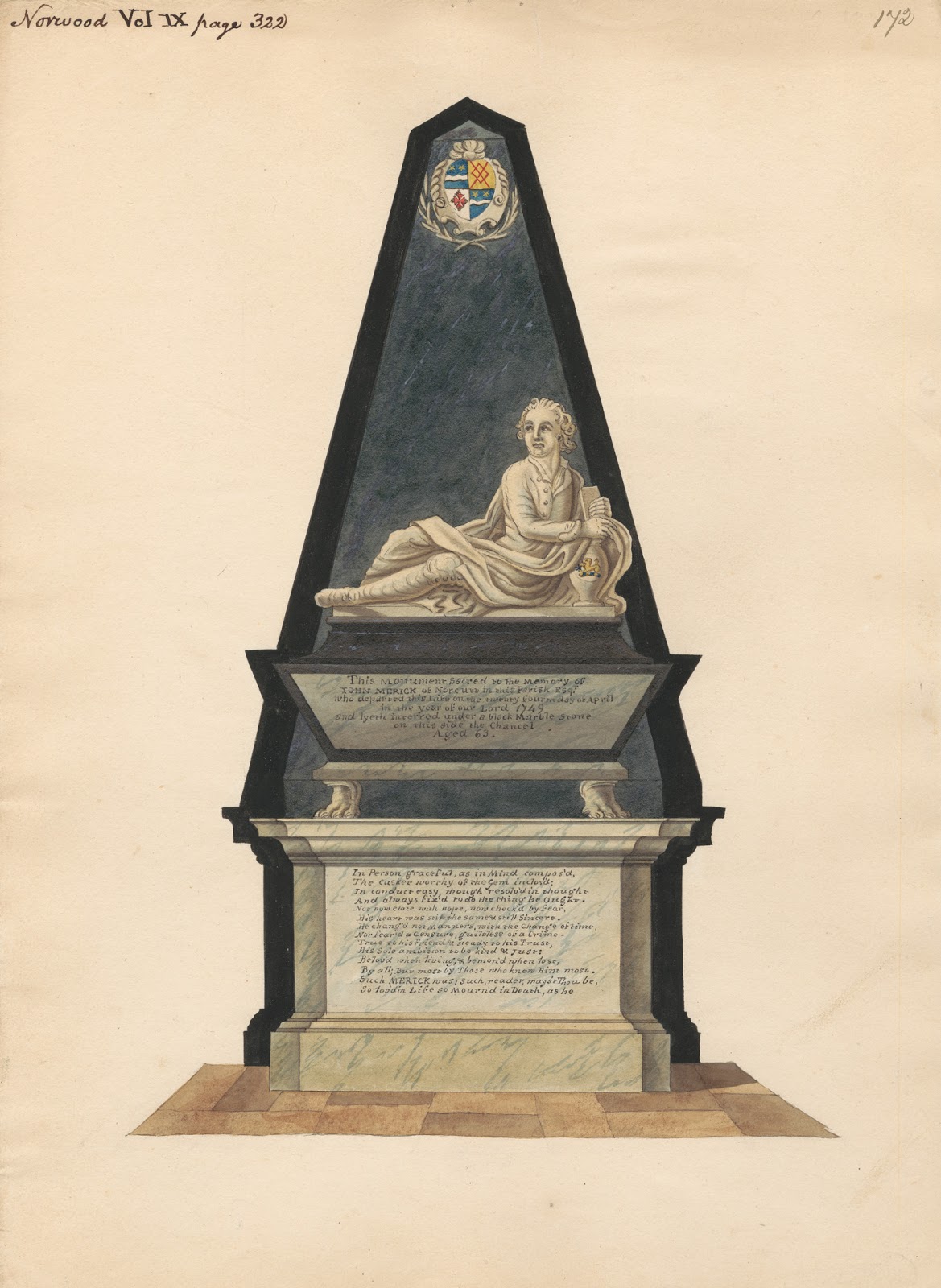 Drawing attributed to Daniel Lysons, 1762–1834, British for The Environs of London. 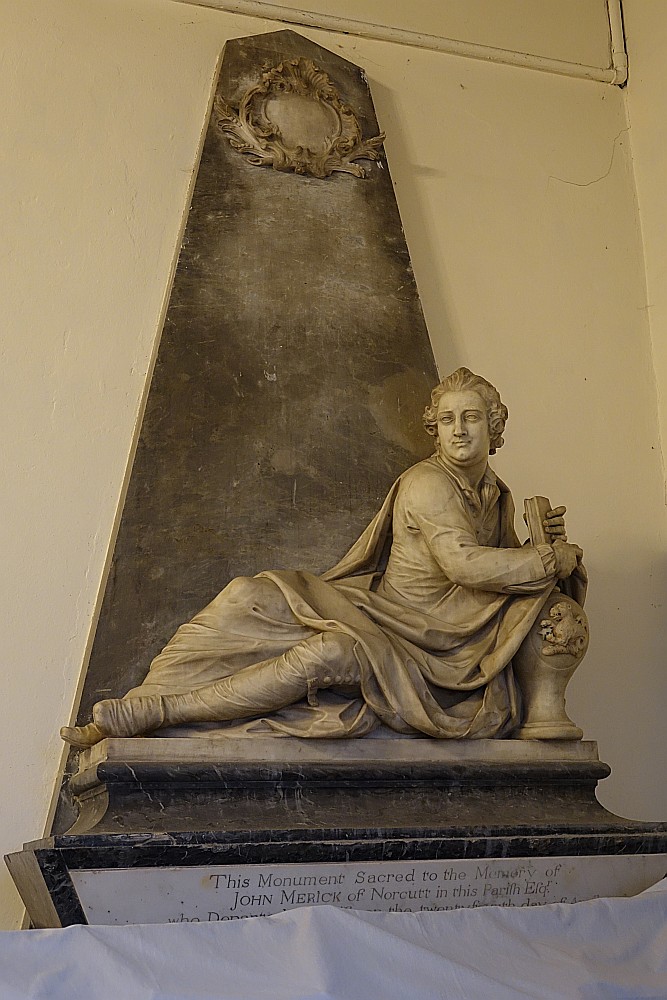 The Bust on the Monument of Dr John Bamber
by Louis Francois Roubiliac.
Note the drapery as on the busts of Sir Andrew Fountaine and Thomas Winnington (see above)

The monument is inscribed 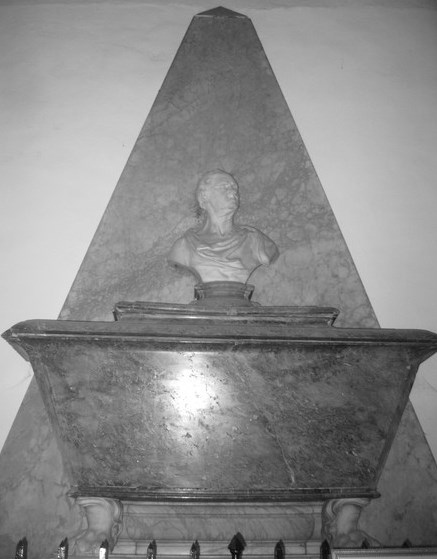 For a brief biog of Dr John Bamber see -

Crisp Gascoyne  married Margaret, daughter and co-heiress of Dr. John Bamber, a wealthy physician of Mincing Lane, who purchased large estates in Essex and built the mansion of Bifrons at Barking.A drawing of this house as it appeared in 1794 is preserved in the Guildhall Library copy of Daniel Lysons's Environs (vol. iv. pt. i. p. 88).

Portraits of Crisp Gascoyne and Dr. John Bamber are displayed in Hatfield House.