Some notes and images.


These remarkable slightly naive terracotta statues and busts have been photographed numerous times and the lack of light whilst I was there made it very difficult to photograph them for the blog.

I believe this collection of sculptures to be unique in English collections. Virtually nothing is known about the sculptor who is presumed to have come from Germany.

It has been suggested in an article in the Connoisseur vol 138 1956 that Joseph Plura was originally contacted for the manufacture of figures for the hall in plaster. Ivory Talbot may have been referring to Plura in a letter to Sanderson Miller in 1753 "an Italian lately come to Salusbury executes these figures well and reasonable -

The collection of correspondence to Sanderson Miller. This is an important work for anyonee interested in the Gothic Revival in Architecture in the 18th century.
__________________________


Pevsner published photographs of the works, which he felt to be German or Austrian in style, in the hope that the sculptor of these ‘weird saints and this bust of ferocious death’ would be the subject of future research (Pevsner 1958, 334).

"On these brackets and in these niches stands the extraordinary statuary of Victor Alexander Sederbach, a pleasant, modest man and a cheap sculptor. Beyond that we know absolutely nothing about him. His Christian names sound North-East German, his surname South German or Austrian, and the statues in Austrian abbeys are indeed perhaps the nearest comparison to these wild, violent, and unrefined mid-C18 pieces. They are made of terracotta, and it has been suggested that Sederbach was perhaps a Hafner, i.e. stove-maker, and not a sculptor.  (The Buildings of England: Wiltshire)"

The last record of Sederbach is a note in the Sanderson Miller letters of 1757 recording that Sederbach had an offer of work in Holland.


Rather than post my rather indifferent snaps, I have taken the liberty to indulge my interest in early photography to post these photographs by William Henry Fox Talbot (1800 - 1877). 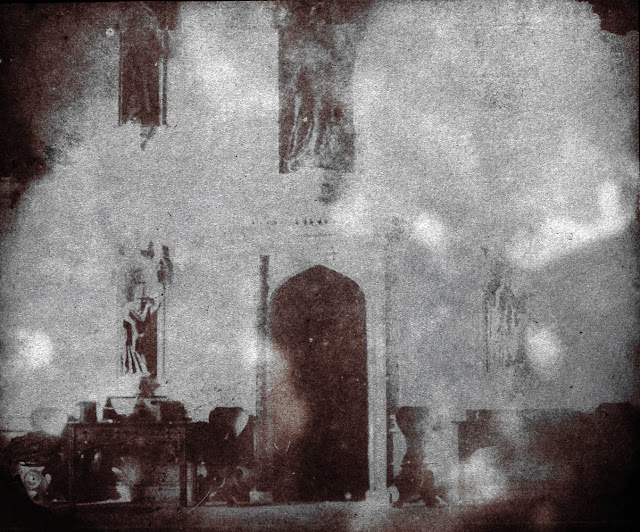 Photograph of the Hall at Lacock Abbey
by Fox Talbot. 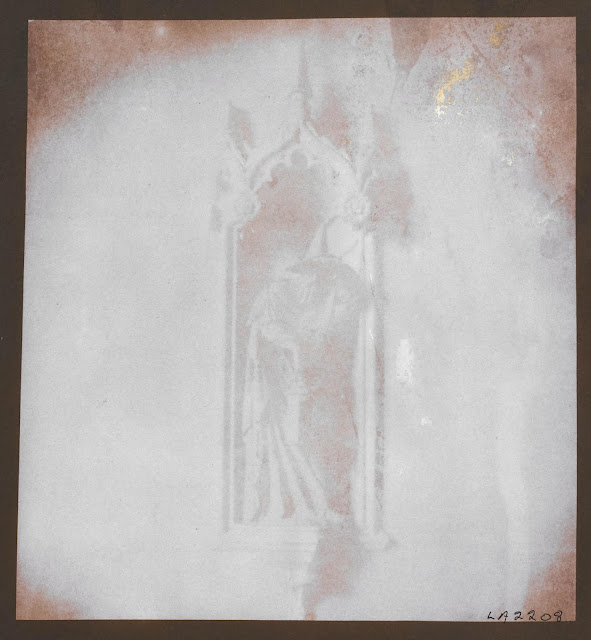 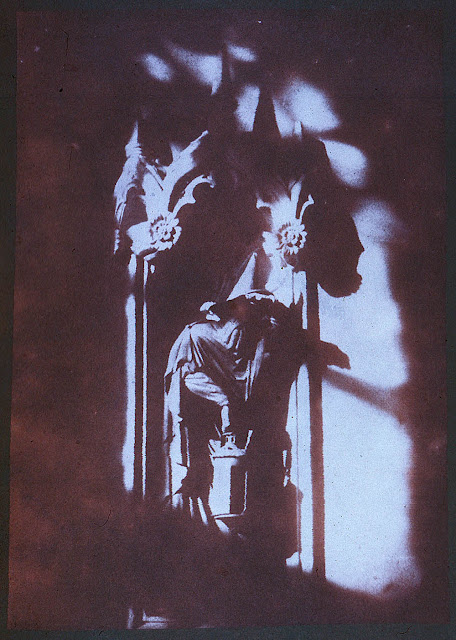 Diogenes holding up his lantern in the quest for truth.
Fox Talbot about 4.00 pm 29 September 1840.

Photograph of the Sederbach Terracotta of Diogenes by the author

A letter of January 1756 from Talbot to Sanderson Miller about Sederbach and his sculptures.

“The Foreigner who has been here ever since May has executed his Performance in a very Workmanlike manner and your Niches are filled by a set of Inhabitants worthy such Repositories. I presume you are acquainted with the method of making Models for Statues. He proceeds on the same Principles, only Bakes them afterwards, by which means they become of a Red Colour and ring like a Garden Pot. … I fancy Lord Shelburn will employ him on his Arrival at London, where he goes next week; however, as so many of your friends are Connoisseurs, I would advise them seeing his Performances, which are both Easy and not Expensive. His name is sonorous, no less than Victor Alexander Sederbach and yet lodges at one King’s a Grocer in Green Street, near Castle Street, Leicester Fields. I am sorry he did not show all his Performances to the Gentleman you sent a note by, but on asking the Reason, was told that someone the day before had Broke a Figure, which had made him extremely Captious.”

Sederbach must have made the figures on-site over a period of some eight months.

A letter from Constance Talbot to her husband William Henry Fox Talbot dated 6 December 1838 refers to their construction: “I have just made acquaintance with an old man who recollects the making of the Terra cotta images in the hall. He recollects some foreigners coming to Lacock & baking the figures in the orchard – it must be about 80 years ago – for the old man is 86.” The figures are recorded in the 1788, 1801 and 1827 inventories, whilst maquettes for some of them remain in the collection.

I am in touch with Sonia Jones head of collections at Lacock who informs me that some of the maquettes for these sculptures are at Lacock awaiting conservation reports - hopefully I will be able to photograph them in due course and to post the photographs here. 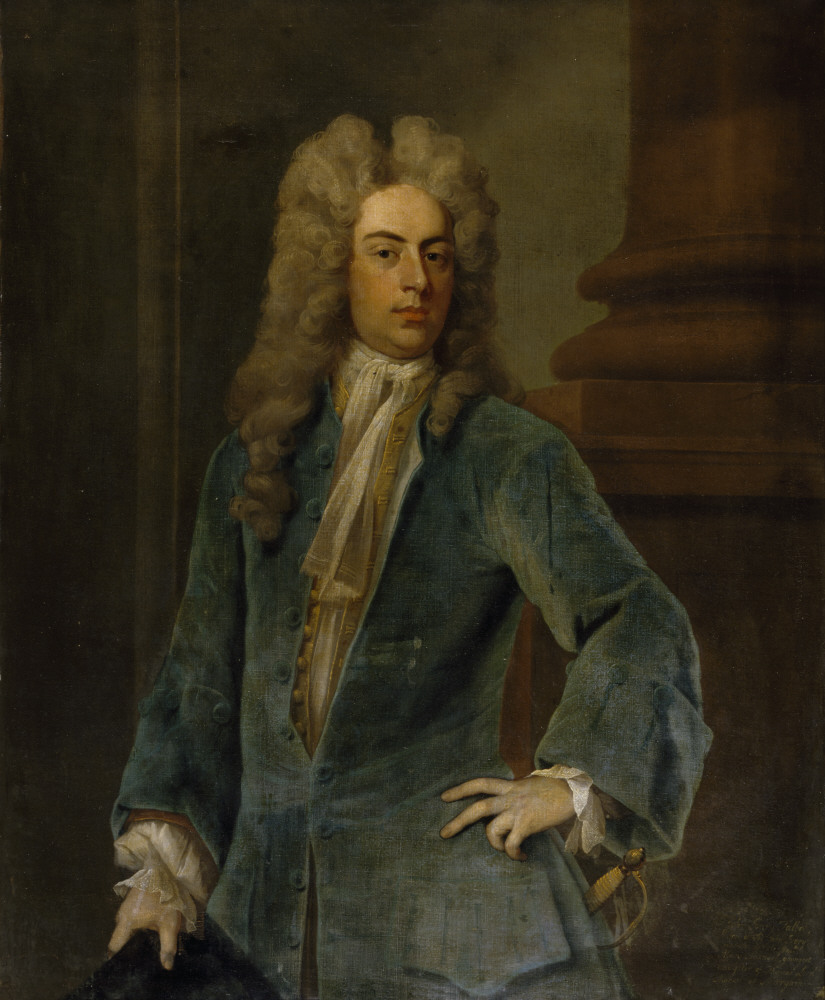 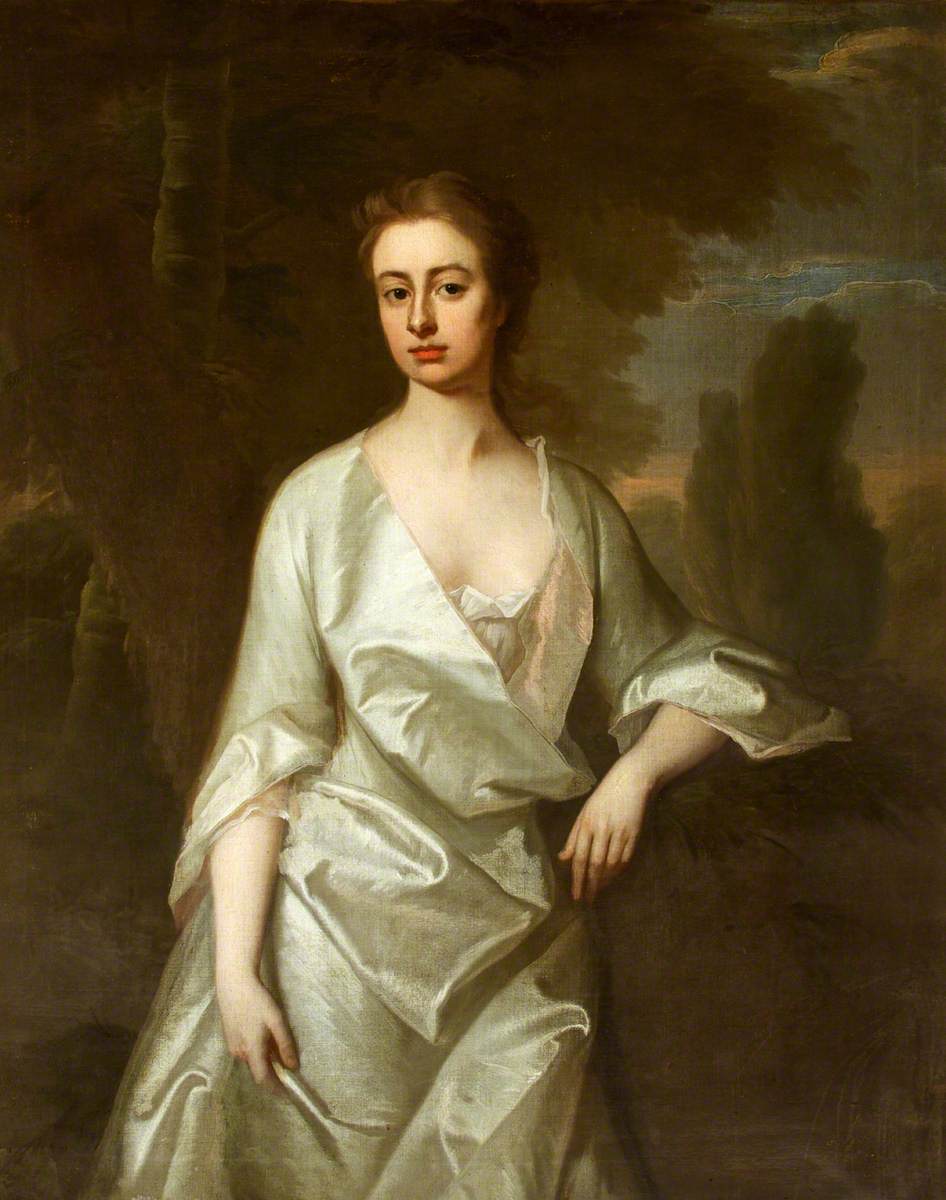 This portrait of Mary Mansel was painted as a pair to that of her husband John Ivory Talbot (1687–1772), whom she is said to have driven to drink (and commission unusual statues).

She was the youngest daughter of Lord Mansel of Margam. She had two sons, John Talbot (1717?–1778) and Thomas, 4th Baron Mansel. Her daughter, Martha (c.1722–1790), married the Reverend William Davenport and inherited Lacock on the death of her brother. 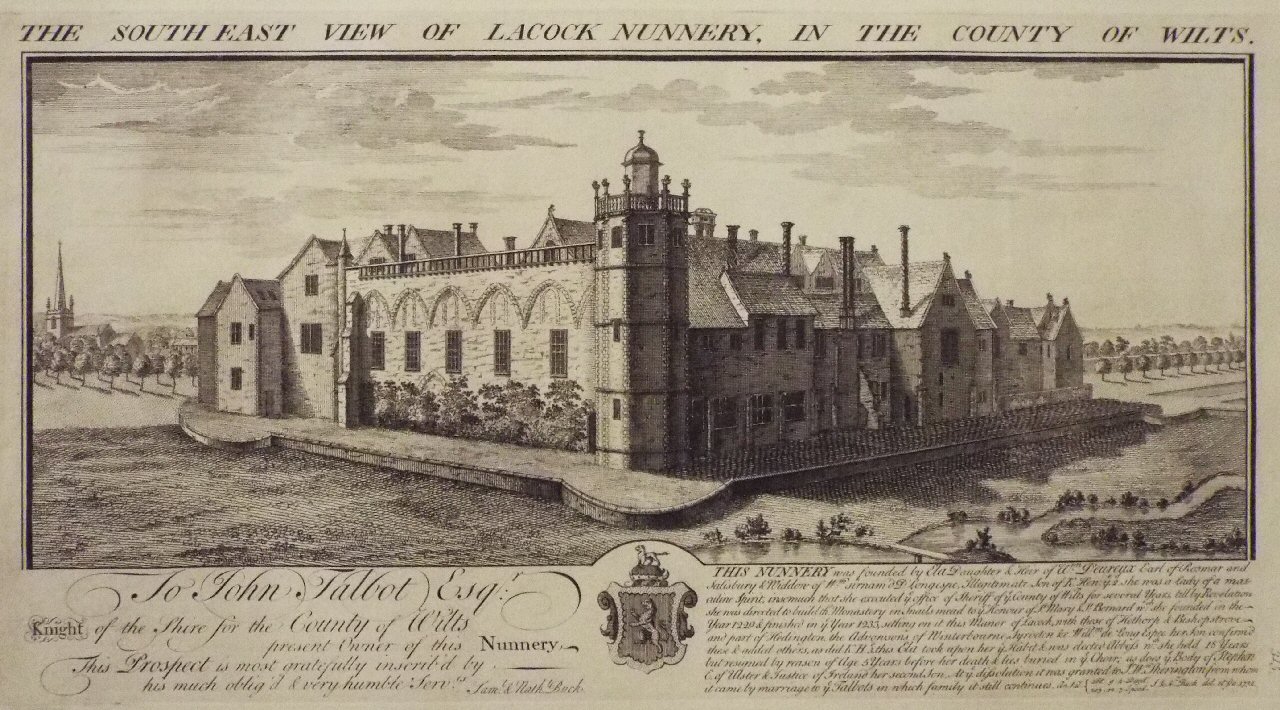 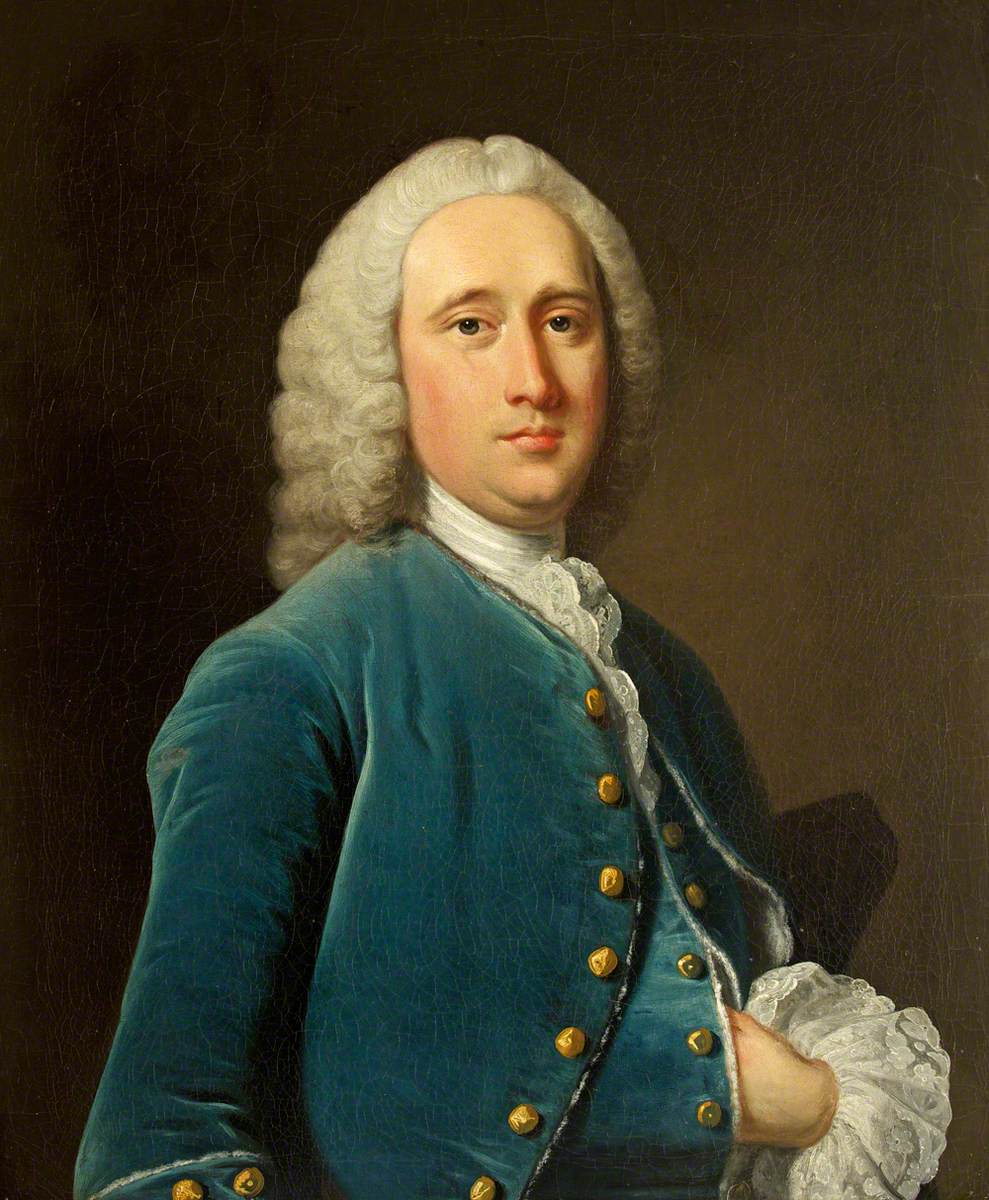