A bust of Alexander Pope at Tottenham Park, Wiltshire.


Letter from Thomas Young concerning a bust of Mr Pope, with detailed sketch, 27th May 1810;


I visited Chippenham Archives and History Centre Tuesday 12 March 2014 with great hopes that the letter of 27 May 1810 from Thomas Young to Lord Bruce regarding a bust of Pope at Tottenham Park, might clarify the identity of the bust mentioned in an Inventory of 14 Nov.1744.- A bust of Pope belonging to Charles, Lord Bruce,Viscount of Tottenham, d.1747. - Tottenham Park, Wiltshire. (10 poets heads on painted and gilt brackets, one ditto Mr Pope).


Unfortunately I feel the waters have been slightly further muddied by this visit. This letter refers to the positioning of a small bust of Pope on the pediment of a mirror (see scans). This letter refers to “ Mr Popes bust 15.5” tall including the socle. The drawing attached to the letter gives the sizes and shows it to be a half life size version of the Barber type bust which suggests that it is a similar plaster bust to that at Longleat. The letter goes on to say that the “the head hangs over so much that it will not stand” 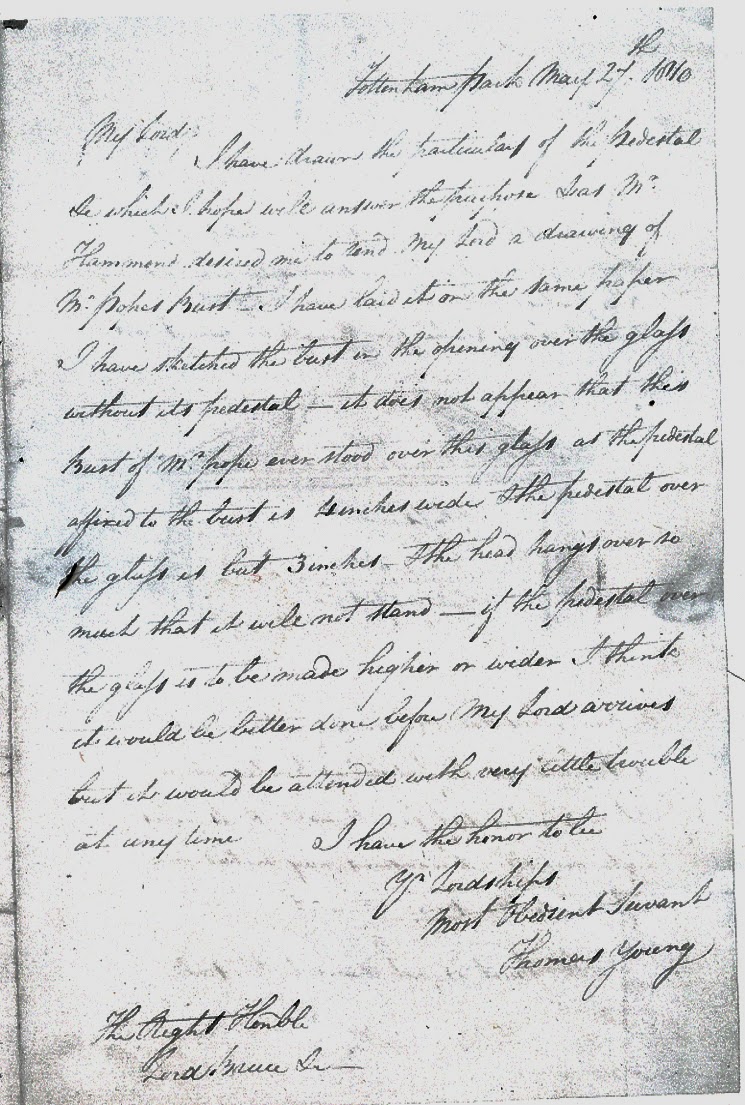 It would seem most likely that bust referred to in the 1810 letter is not the bust of Pope referred to in the inventory of Lord Bruce in 1744 but a later plaster bust, perhaps by John Cheere or one of the other plaster casters of the mid 18th century such as Benjamin Rackstrow (1707 -72) of St Martins Lane and later of Fleet Street or Charles Harris of The Strand. 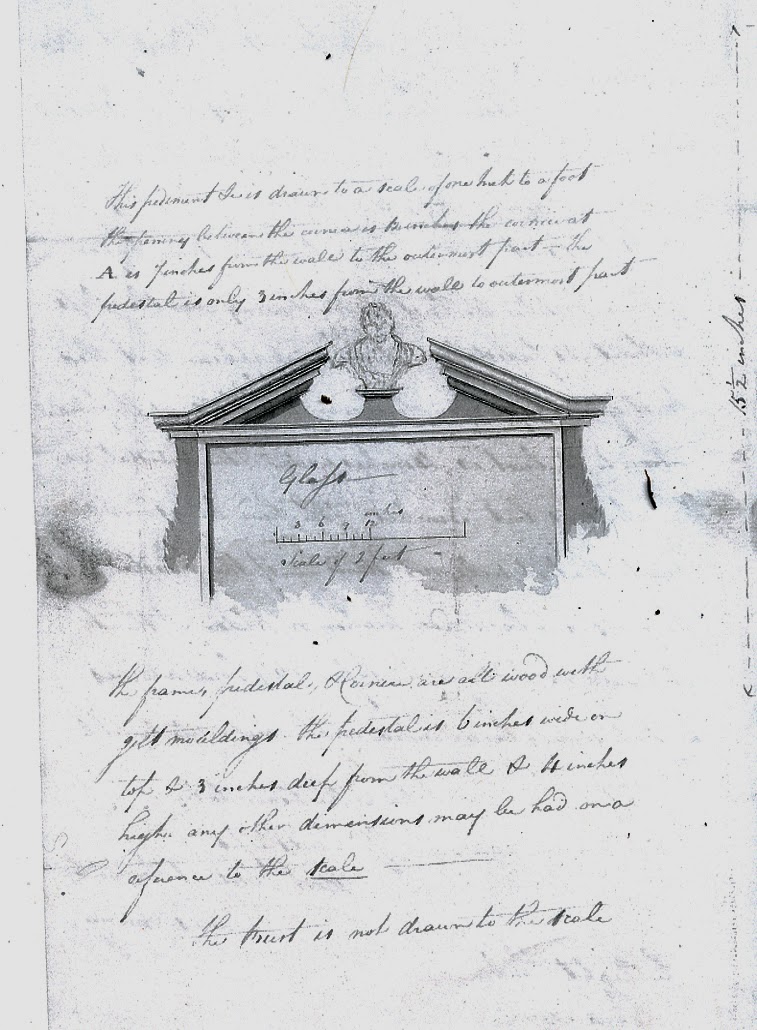 Drawing attached to the letter from Thomas Young to Lord Bruce 1810. 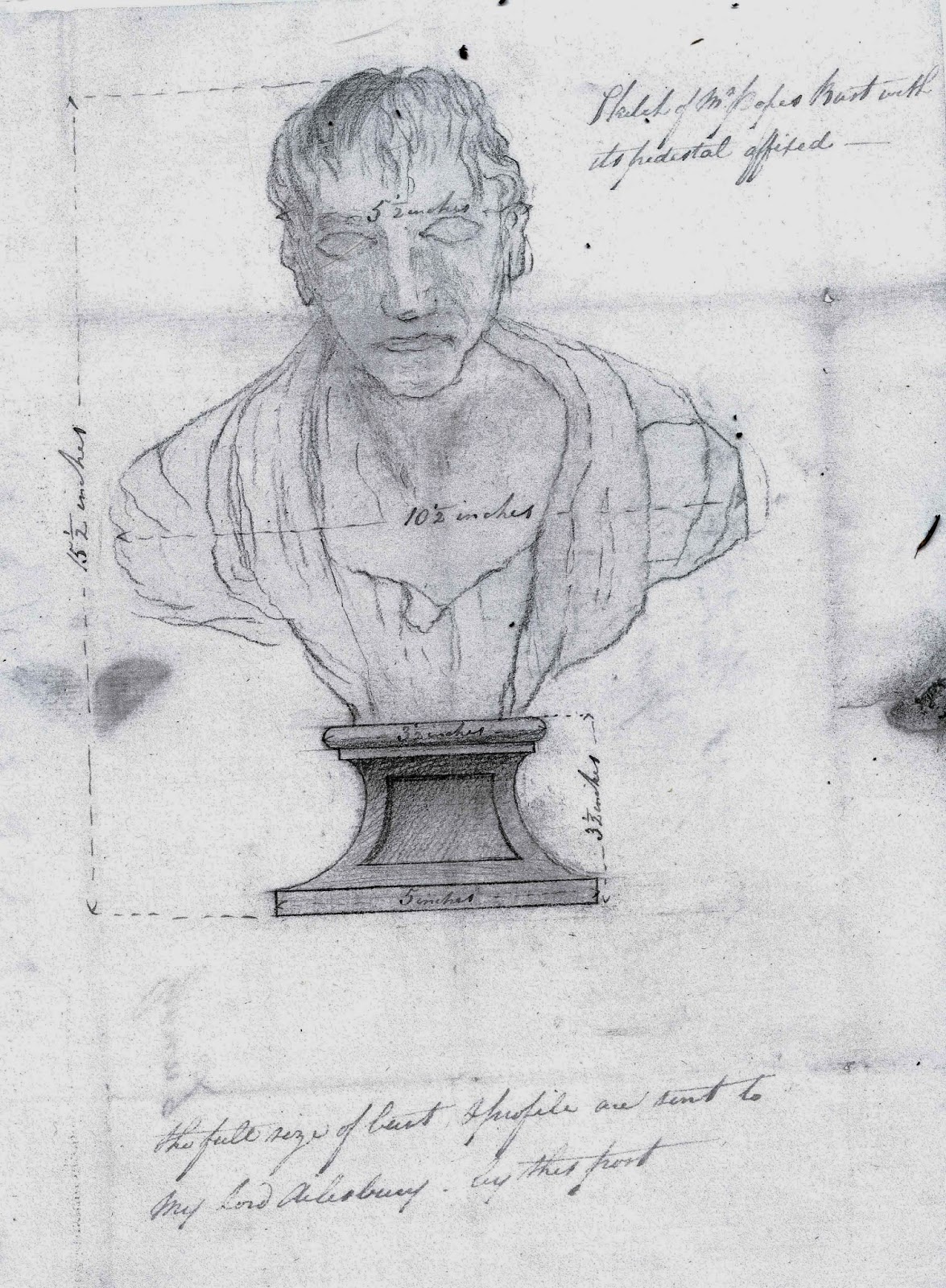 Drawing showing the size of the bust of Mr Pope with Socle attached to the letter of Thomas Young to
Lord Bruce 1810. 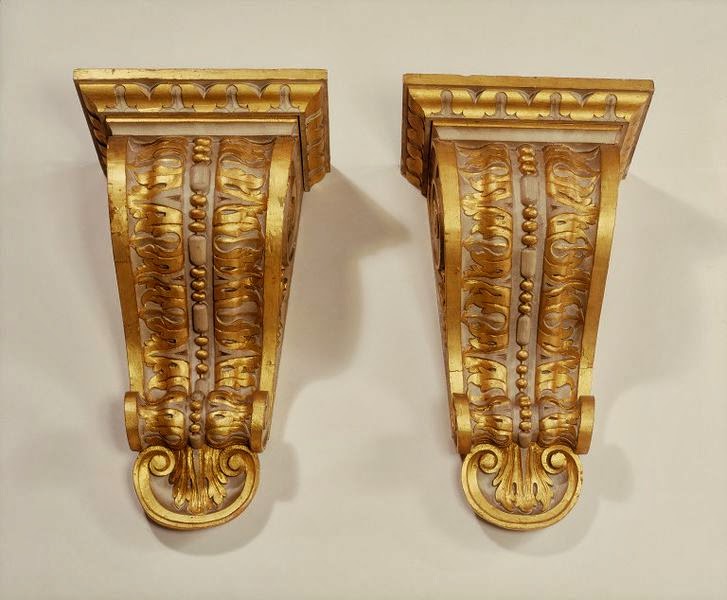 The Pair of Corbel brackets from Tottenham Park, Wiltshire in the V and A are much too big ( height: 60.96 cm, width: 35.56 cm, depth: 26.67 cm) for a small plaster bust but are eminently suitable for full size marble busts.
They suggest that they were designed by William Kent.
This bracket and its pair (museum no. W.1-1988) are mentioned in the 1745 inventory of the contents of Tottenham Park, Wiltshire described as 'ten poettes heads on painted and gilt brackets (one ditto of Mr. Pope)'.


Until things are clarified I believe that the most likely candidate for the bust of Pope at Tottenham Park and mentioned in the inventory of Lord Bruce of 1745 in Lord Bruce study is the bust now at Yale Centre for British Art.

Posted by David Bridgwater at 02:27