Researching the Busts of Alexander Pope by Roubiliac

Researching the busts of Alexander Pope by Louis Francois Roubiliac.

I was prompted to publish these papers by the announcement of -

Fame and Friendship: Pope, Roubiliac, and the Portrait Bust in Eighteenth-Century Britain
Thursday, February 20, 2014–Monday, May 19, 2014 - an exhibition at the Yale Centre for British Art, New Haven Conn. USA


I commenced this project in 2000 after being involved in the purchase of a fine marble bust of Alexander Pope - when I first saw this bust I was convinced that it was a lost bust of Pope by Roubiliac, but I had very little to go on except a photocopy of part of the book The Portraits of Alexander Pope by William Kurtz Wimsatt published in 1966. 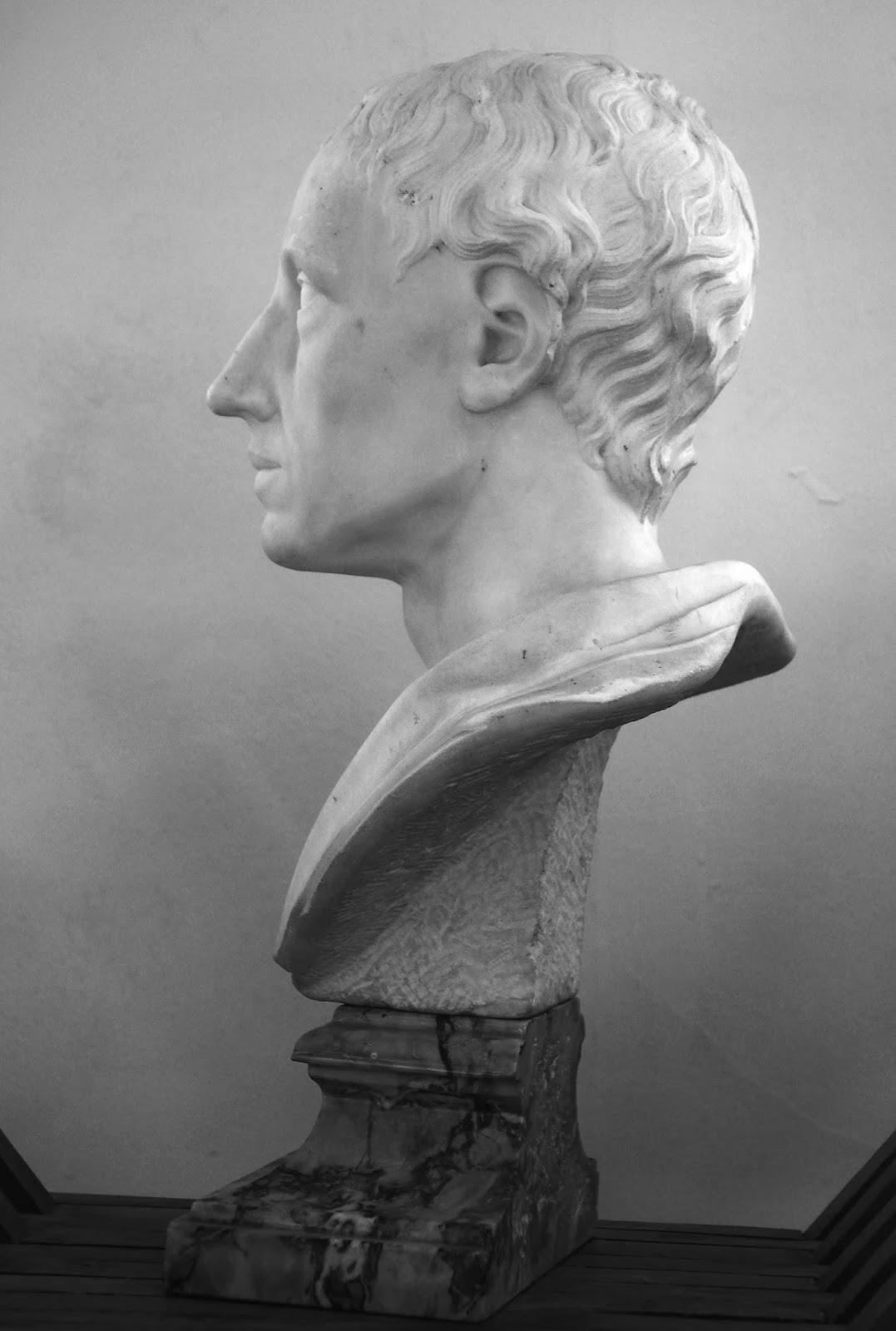 The William Seward Bust of Alexander Pope by Roubiliac.


I consulted the leading expert on Roubiliac at the Victoria and Albert Museum and a couple of very smart dealers who all assured me that our bust was one of many copies and made in the 19th century. My next step was to visit the Heinz Archive of the National Portrait Gallery where I discovered in their file  of images of Alexander Pope, a photocopy of the engraving of John Browns drawing of our bust. It was an “eureka” moment. This engraving could not have depicted any other bust but ours - it is unmistakeable. Again this information was provided to several leading academics who assured me that it was an 18th century copy by a lesser hand! 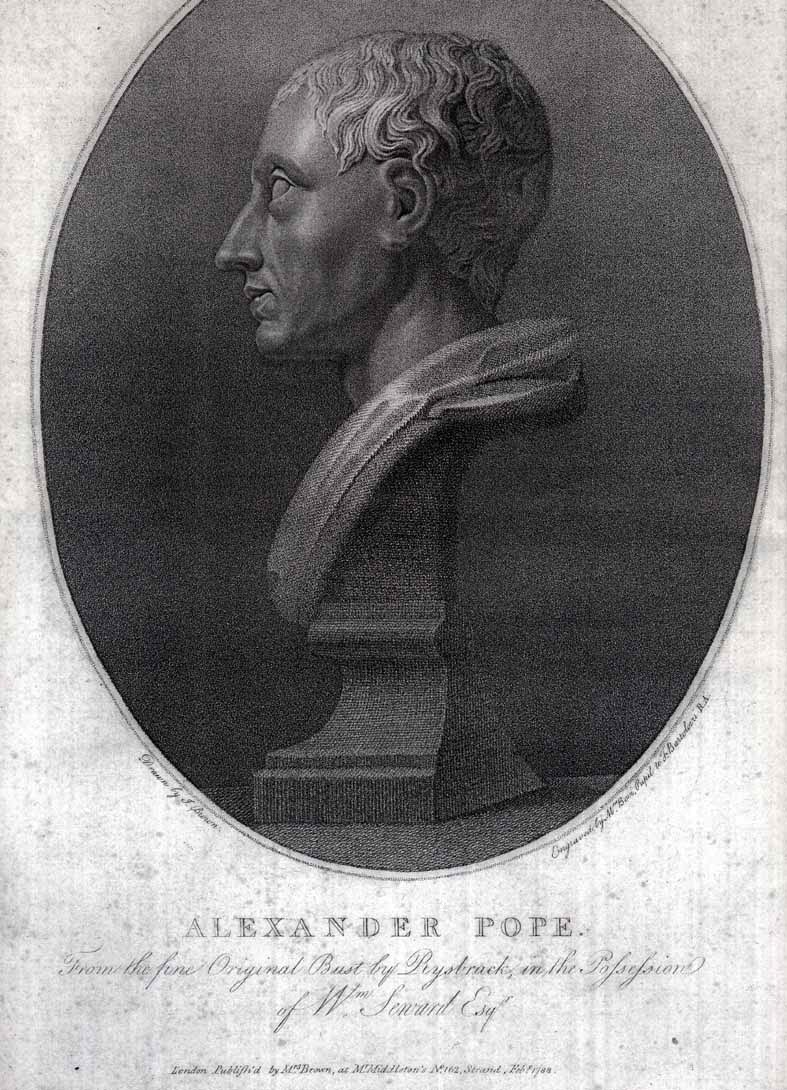 I had known of this 1788 engraving depicting the bust of Pope (which stated on it that it was owned by William Seward) for several months before consulting his will at the Public Records Office in Kew, on the off chance that the bust might be mentioned in it.


Sure enough (and to my utter astonishment) I discovered that Seward had stated in his will that he left his bust of Pope given to him by Mrs Vandewall to William Morland. At this point I had no idea who any of these people were and set out to find out.


I had no idea what I was starting or where this research would lead me or how exciting or how much time it would take!


My first step was to discover something about William Seward. The Dictionary of National Biography immediately put me on the right course. William Seward was a dilettante writer, friend of Dr Samuel Johnson. His father was partner in Calvert and Seward of the Peacock Brewery in Red Cross Street, London, the largest brewers in London in the mid 18th century.


My second step was to consult the index of the Gentleman's Magazine in my local library to find out who Mrs Vandewall might have been. Not as easy as I might have hoped – several of the required volumes were away being rebound. There were six references to Vandewalls in the indexes.


One entry was for 20 February 1761 mentioning the death of Samuel Vandewall at Lincoln's Inn Fields.


Another the wedding on 22 November 1744 of Samuel Vandewall an eminent merchant and the relict of Mr Harris Neate a West India merchant of London.


An entry in 1737 was for a marriage between Frances daughter of Joseph Ingram and Joseph Vandewall at the Bull and Mouth meeting. I had heard of the Bull and Mouth coaching Inn at Aldersgate Street, St Martins Le Grand in London but not a Bull and Mouth Meeting. The word Meeting indicated that this might refer to a Quaker meeting house and that this could have been a Quaker wedding.


This information was enough to indicate that the Vandewalls might be Quakers and I went to the Quaker Friends Library on Euston Road, London to see if they could assist me.


As one might expect they were incredibly helpful and produced from their archives in the basement a type written almost complete family history of the Vandewalls from 1909 compiled by JJ Green. This manuscript opened the floodgates for me and provided the basic information on which I was able to build a detailed account of the wealthy Quaker Bevan, Neate and Vandewall families and their relationship with 18th century art and industry. The internet has been and continues to be a fantastic resource for any modern investigation like this.


The 1788 engraving stated on the header that the bust was by Rysbrack - clearly a mistake – it was very obviously of the Roubiliac type. The engraver had managed to only got the R and the ac right.

A very unusual and important feature of the Seward bust is that it is very obviously unfinished - the individual curls of the hair have been cut but have no detail, he has no eyebrows and the flesh has not been polished. It is my understanding that the final cutting of the Roubiliac busts took place after the bust  had been polished with a very fine pumice or similar abrasive.

In order to establish whether this bust was definitely by Roubiliac it was necessary to find the location of all the other versions of this bust, make detailed comparisons and to establish some sort of chronological history of each one.

My researches led me to conclude that the Seward bust was one of the two busts of Pope still in the Roubiliac studio in St Martins Lane when he died and sold in the posthumous sale at the studio by the auctioneers Langford's of the Piazza, Covent Garden from 12 - 15th May 1762. One is described as a bust (the William Seward version), the other is described as a head - almost certainly the Roger Warner bust.

These researches have taken me down the highways and byeways of 18th century culture. I have received precious little help from sculpture academics (you know who you are) with the exception of Amy Meyers at Yale, John Physick, and Adam White.

I have been sad to discover how some art academics like to own their subjects and loose sight of the reason for their work in the first place - that is to disseminate knowledge and not to collect it and use it for their own advancement.


Once I had reached the stage where I felt that these researches were nearing completion I then intended to prepare the work for publication, but as time went by and other matters continued to intrude it became less likely that I would get it together.

It has been a great privilege to have been involved with this project. So here in this blog are my findings in no particular order and edited only up to a point and probably very repetitive as well.

To my readers (if there are any) I apologize.