The Eight Statues on the West Front of the Library.


I am very much indebted to Dr Graeme Salmon, Curator of Pictures at Queen's College, Oxford for making me welcome at Queen's and for making this work possible.


Queen's College is named for its first patroness, Queen Philippa of Hainault, the wife of King Edward III). Established in January 1341 'under the name of the Hall of the Queen's scholars of Oxford' (sub nomine aule scholarium Regine de Oxon), the college was subsequently called the 'Queen's Hall', 'Queenhall' and 'Queen's College'. An Act of 1585 sought to end this confusion by providing that it should be called by the one name 'the Queen's College'.


For a useful biog see: 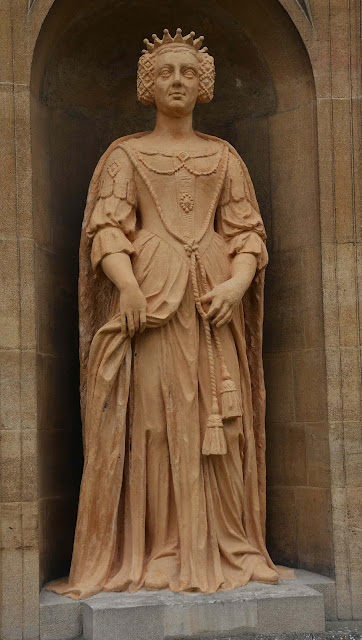 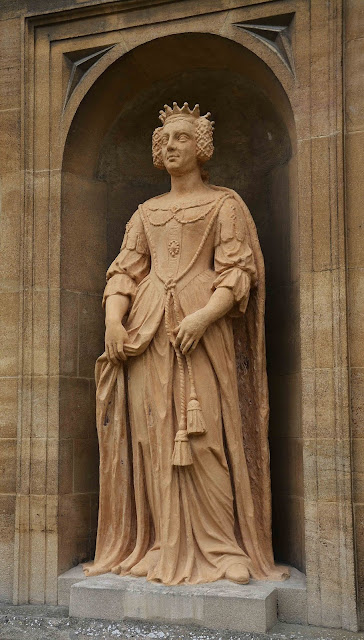 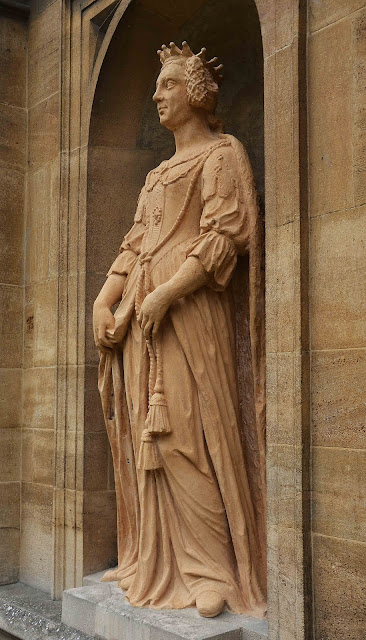 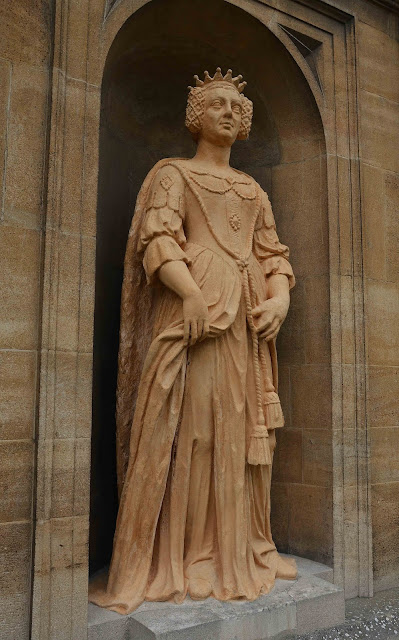 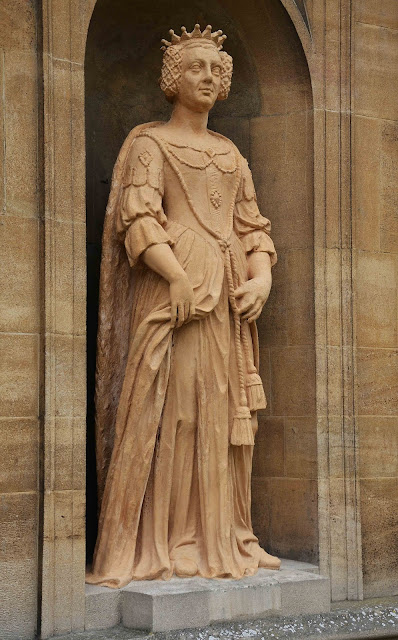 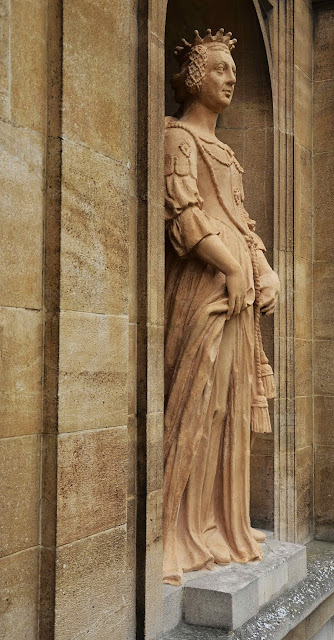 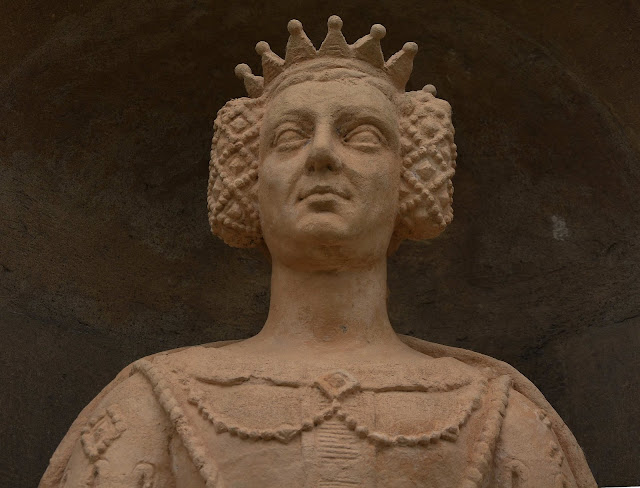 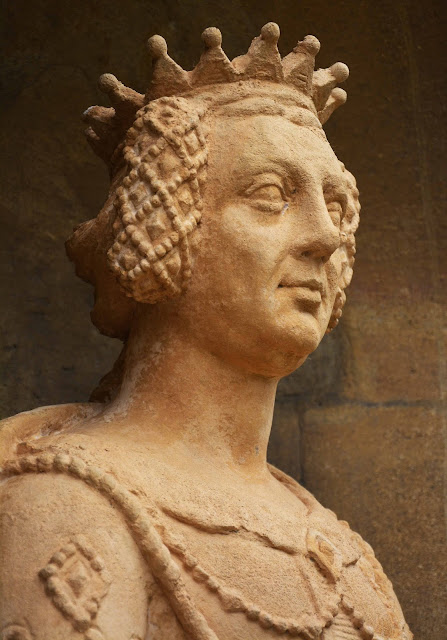 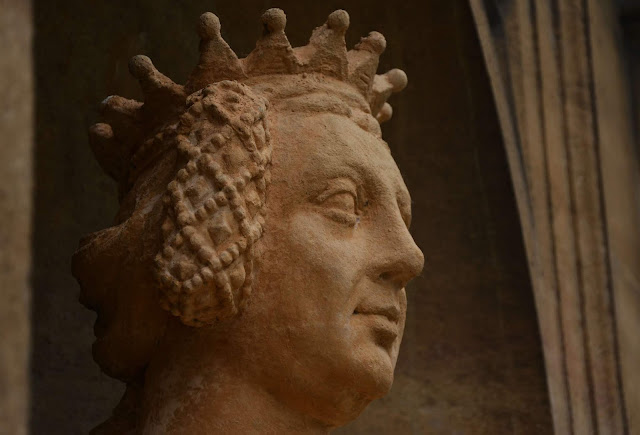 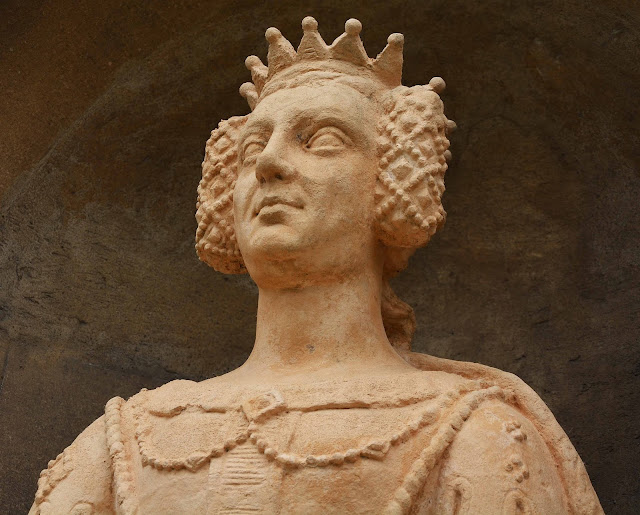 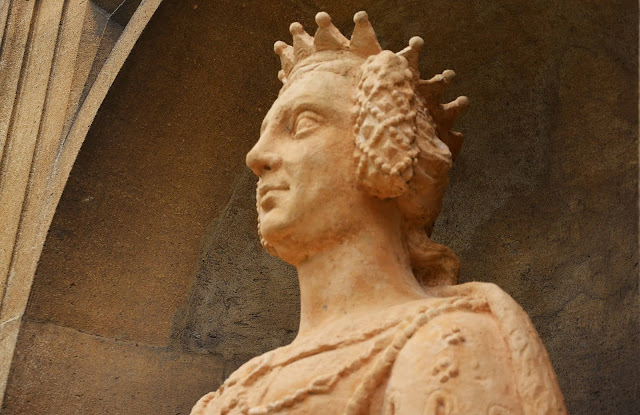 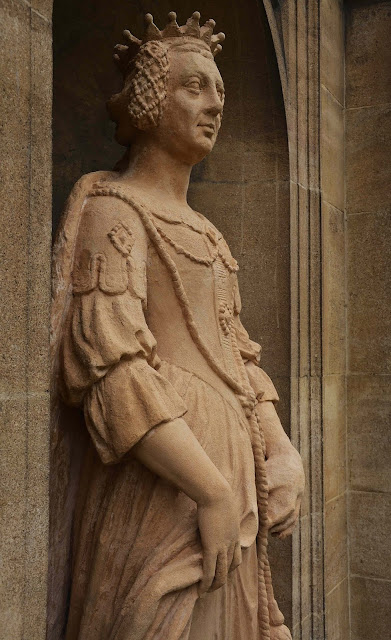 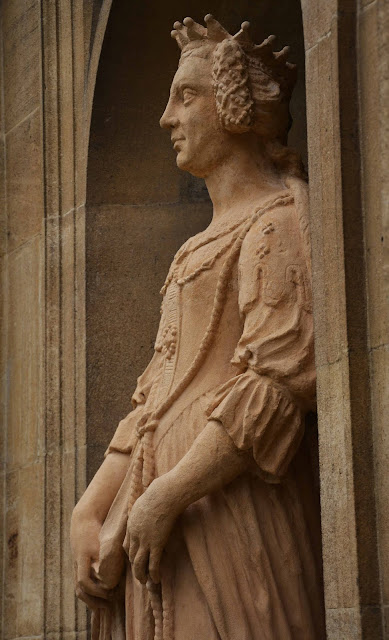 All photographs above taken by the Author.

A full-length wooden effigy of Philippa in Queen's College, Oxford.

It does not appear that the timber of this statue has yet been investigated by any dendrochronolical testing or paint analysis.

“Hall of the Queen’s Scholars at Oxford” was founded in 1341 by Robert de Eglesfield, a chaplain in the household of Queen Philippa, who named it in her honour. He envisaged an establishment of fellows, chaplains, ‘poor boys’ and various officials and servants, headed by a Provost. Membership was to be open, but with a preference for inhabitants of Cumberland and Westmorland.

Initially Queen’s was poor, but the endowment slowly grew. Crucially, in 1343, Philippa secured for Queen’s a small hospital in Southampton with its lands, destined to be the basis of much of the College’s prosperity in the nineteenth and twentieth centuries as Southampton Docks expanded and surrounding farmland was developed.

After 1400 the preference for people from Cumberland and Westmorland became a monopoly, making Queen’s a community of north-westerners. During the fifteenth and sixteenth centuries it prospered, and in Elizabeth’s reign, when it became one of the most popular Oxford colleges, there is growing evidence for the development of the tutorial system. Benefactions continued, notably those of Bishop Thomas Barlow (Provost 1658-77); Sir Joseph Williamson (Charles II’s Secretary of State); and Lady Elizabeth Hastings (died 1739), whose endowment of exhibitions from twelve schools in Cumberland, Westmorland and Yorkshire extended the College’s normal catchment area.

Meanwhile Queen’s was expanding. Williamson gave a building in 1671-2, and the magnificent Library, one of the finest in England, was added during 1693-6 to house Barlow’s books.

Around 1700 the crucial decision was taken to rebuild the medieval College entirely, so that by the 1730's Queen’s was the only Oxford college to be housed entirely in Baroque buildings. The Front Quad has been called ‘the grandest piece of classical architecture in Oxford’,

Text above adapted from: 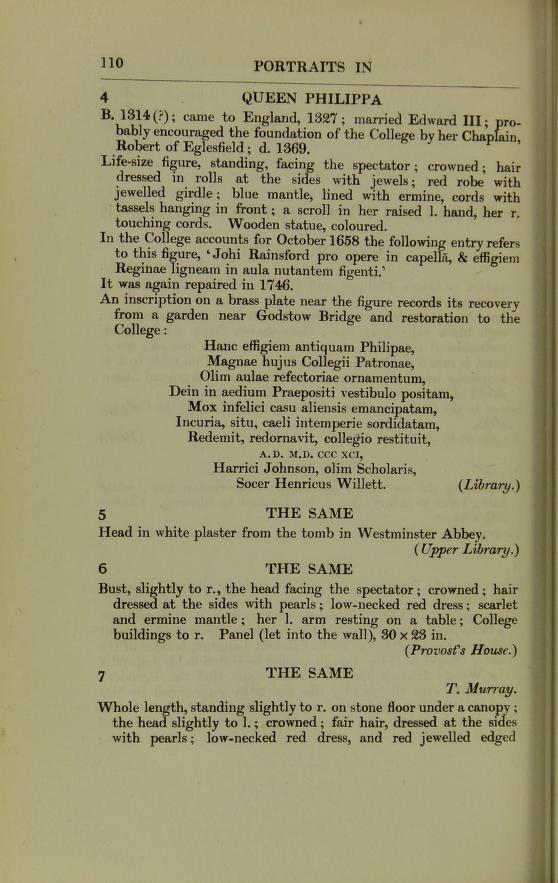 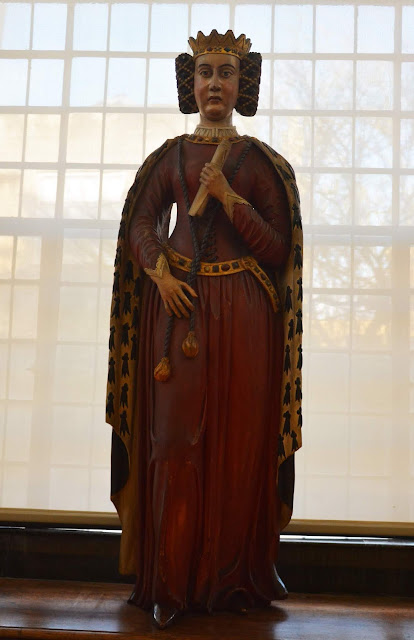 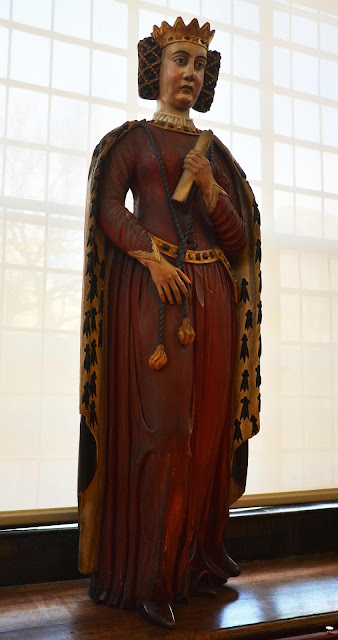 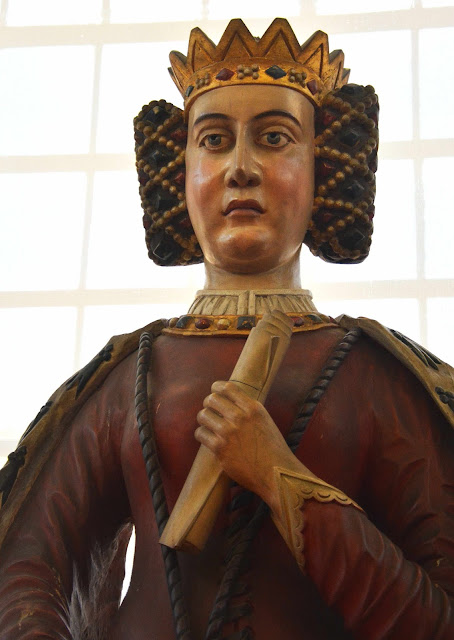 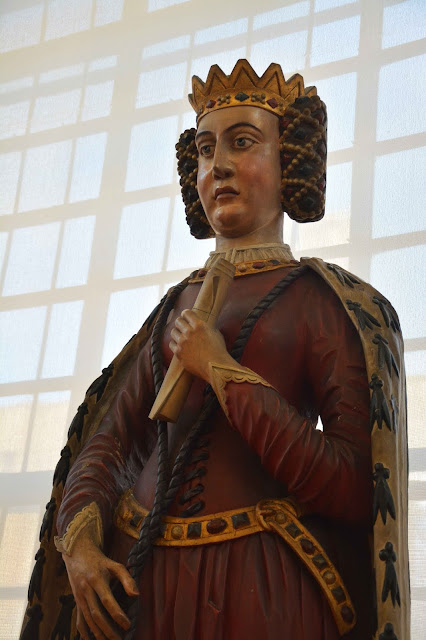 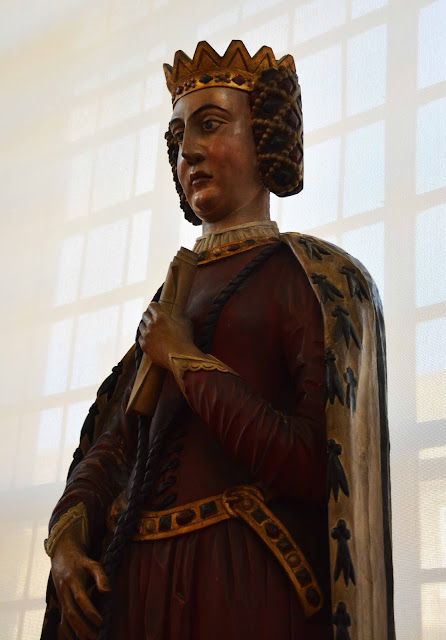 Photographs above by the Author 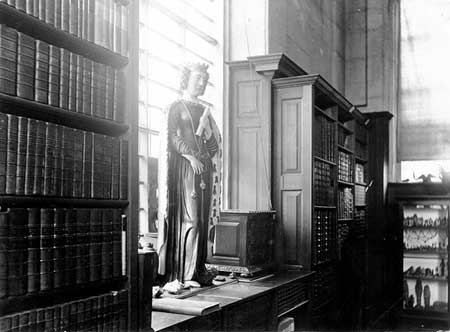 Photograph of the statue of Philippa of Hainault in the Library at Queen's College
1903.
Photographed by Henry Taunt.
From Historic England website


The king died of a stroke at Sheen Palace on 21st June 1377. A torch lit procession accompanied the coffin which first stopped at St Paul's cathedral. His funeral took place in the Abbey on 5th July and he was buried near his wife's monument in the chapel of St Edward the Confessor. His bones lie in the tomb chest

The full length wooden effigy, which was carried at his funeral, is preserved in the Abbey collection and the face (a plaster mask fixed to the wood, slightly distorted on the left side of the mouth) is thought to be taken from a death mask.

On his Purbeck marble tomb is a gilt bronze effigy, with long hair and beard, which is possibly by John Orchard. He wears his coronation robes and holds the handles of two sceptres (the rest being broken off). He has small buttons on his cuffs and decoration on his shoes. On the flat tomb top are niches, some of which still hold small gilt angels. The pillow below the king's head is a replacement from 1871 (given by Queen Victoria), the original having been lost. The lion at his feet (shown in an engraving of 1677) has now gone. The inscription can be translated:

Here is the glory of the English, the paragon of past kings, the model of future kings, a merciful king, the peace of the peoples, Edward the third fulfilling the jubilee of his reign, the unconquered leopard, powerful in war like a Maccabee. While he lived prosperously, his realm lived again in honesty. He ruled mighty in arms; now in Heaven let him be a king.

Originally there were bronze weepers (or statuettes) of twelve of his children round the tomb but only six of these now remain on the south side - Edward the "Black Prince", Edmund of Langley, William of Hatfield, Lionel of Antwerp, Mary of Brittany and Joan of the Tower. (Those that are now missing were to Isabel, Dame de Couci, William of Woodstock, John of Gaunt, Blanche of the Tower, Margery Countess of Pembroke and Thomas Duke of Gloucester, with their enamelled coats of arms below).

Above the tomb is an elaborate wooden tester by Hugh Herland. The arches terminate in half-angels as pendants. The soffit has a rich ribbed vault of six bays with cusping and bosses carved with human and beast-heads, many of which are missing. Four large enamelled shields (showing the cross of St George and the arms of France and England quarterly) remain on the south side of the tomb chest.

A state sword, seven feet long, was traditionally associated with this king and was kept near his tomb for many centuries. Also a shield covered with canvas and black leather, now much mutilated. 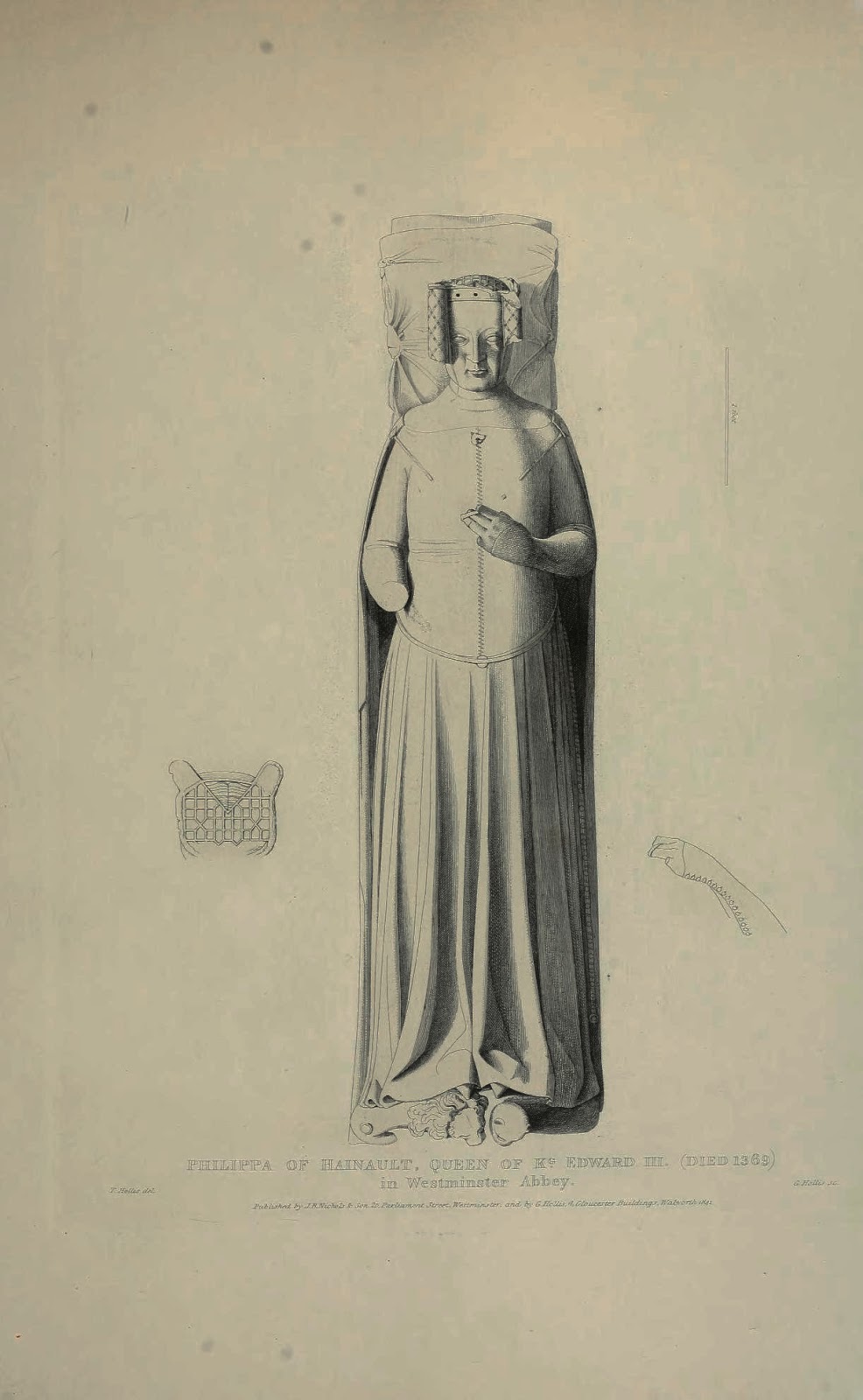 Image above from The Monumental effigies of Great Britain.

The alabaster tomb in Westminster Abbey stands to the east of Edward III's monument on the south side of the Confessor's chapel and was commissioned in 1367, during Philippa's lifetime, from Jean de Liège of Brabant.

The bronze figures of angels, however, were cast by John Orchard in 1376. Philippa's effigy represents a 'realistic' rather than an idealised image of the ageing queen. This was an innovation in English tomb sculpture. Jean de Liège had already worked for the French court. He had executed on the orders of Charles V the effigies of Blanche and her sister, the king's baby daughters. He later carved the effigies of Charles IV (d. 1328) and his widow, Jeanne d' Evreux (d. 1371), for the French royal mausoleum of Saint-Denis. 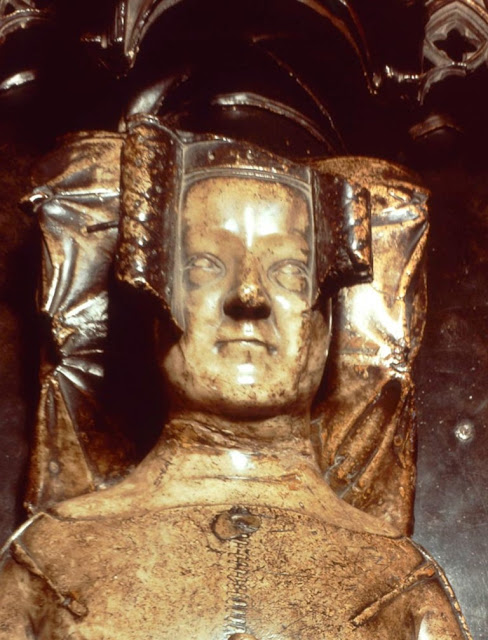 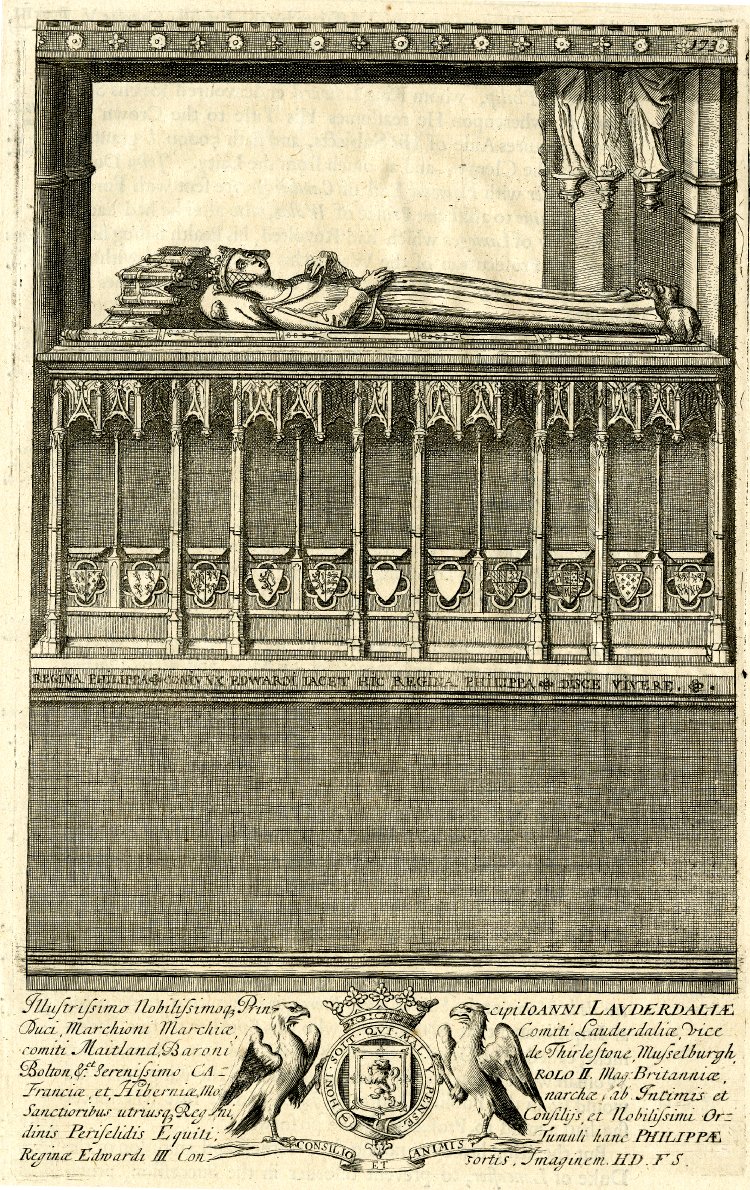 Tomb of Queen Philippa at Westminster Abbey, her effigy lying under a canopy with head to coat of arms below at centre; letterpress on verso;
Wenceslaus Hollar

illustration to Sandford, 'A Genealogical History of the Kings of England' (London, 1677, p.173). 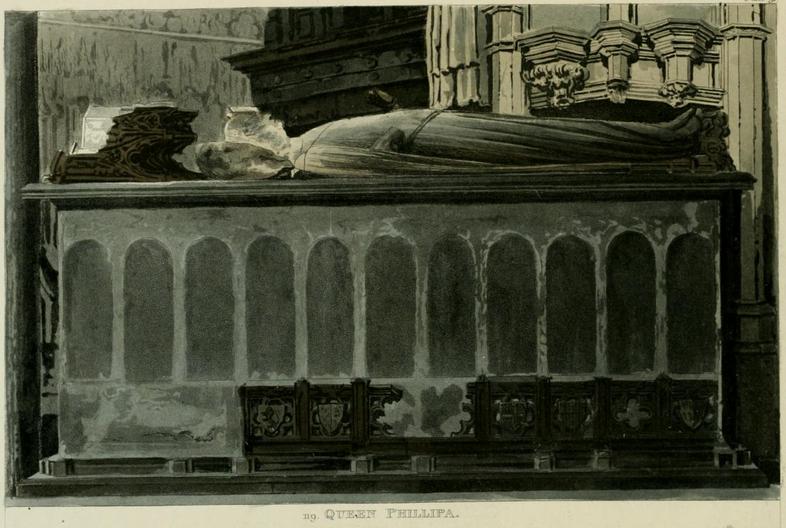 Tomb of Edward III and Queen Philippa,
From Ackerman 1812.

She died at Windsor Castle on 14th August 1369. The king was devoted to her and spent about £3,000 on her tomb in the Confessor's chapel at the Abbey, in which her bones lie. The queen's alabaster effigy, by Hennequin (Jean) of Liège, is undoubtedly a portrait as it shows her plump figure and kindly face. She originally held the string of her cloak in one hand and a sceptre but the hands are now broken. She wears a reticulated head dress, tight bodice laced in front, buttoned sleeves and a loose cloak. Her bones lie in the tomb chest below the effigy.

The tomb has been much mutilated over the centuries and most of its decoration has disappeared and there is now no inscription. But this short Latin inscription was recorded in 1677, translated as "Queen Philippa. Wife of Edward lies here. Queen Philippa. Learn to Live" on the base below the shields. The railings which once protected the tomb on the south side were removed in the early 19th century.

Only two of the many weepers (statuettes) around the tomb still survive (the original scheme of figures is recorded in the Abbey's Liber Niger cartulary, together with statues above the tomb ie. St Louis (king), St Louis (bishop), St John the Baptist and St George). The weepers, including one thought to be Blanche of Lancaster holding her pet monkey, are protected by a grille. The headless one has the arms borne by Philippa herself below it. When the Chantry Chapel of Henry V was built this encroached on the eastern end of her tomb. Two shields of arms remain on the south side of the tomb, two are hidden at the east end and three are on the north side (behind the protective grille). 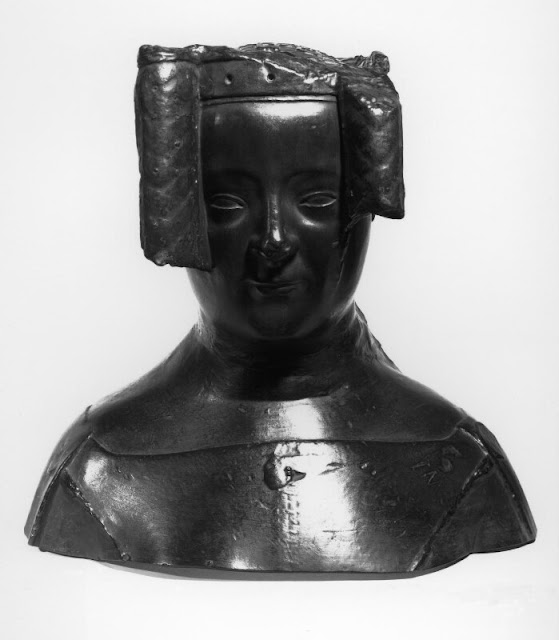 by Elkington & Co,
Cast by Domenico Brucciani, after Jean de Liège.
Electrotype, 1873,
based on the Alabaster on the tomb at Westminster Abbey of circa 1367.
438 mm. high 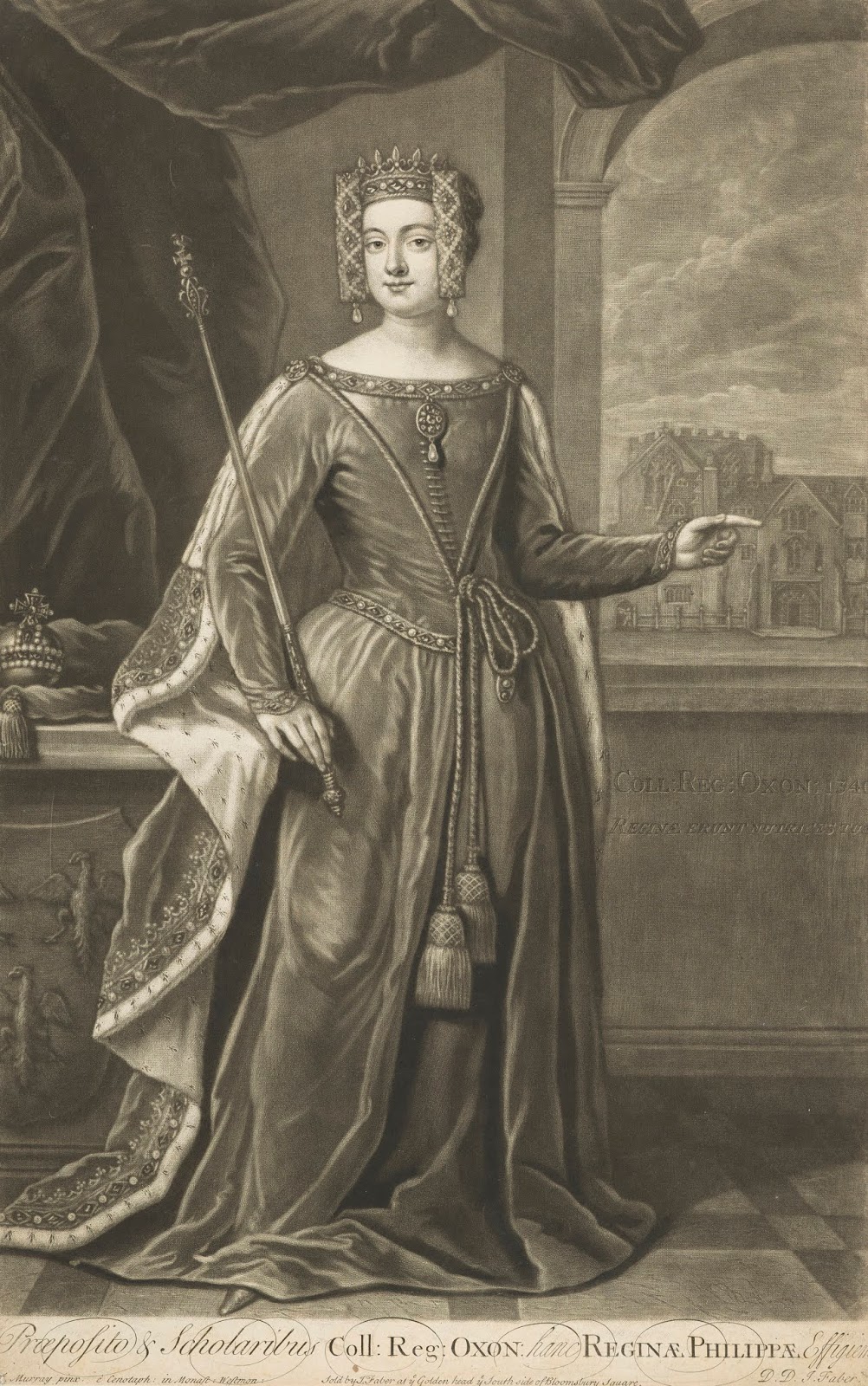 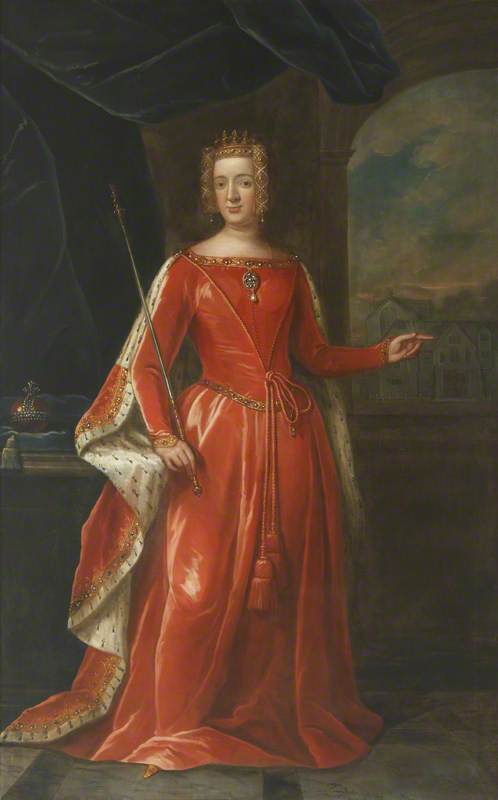 The artist, Murray possibly used the wooden effigy in the college as a template. He follows the hairstyle and cut of the dress of her tomb effigy at Westminster Abbey. Through the archway Philippa is pointing to the medieval buildings of the College. 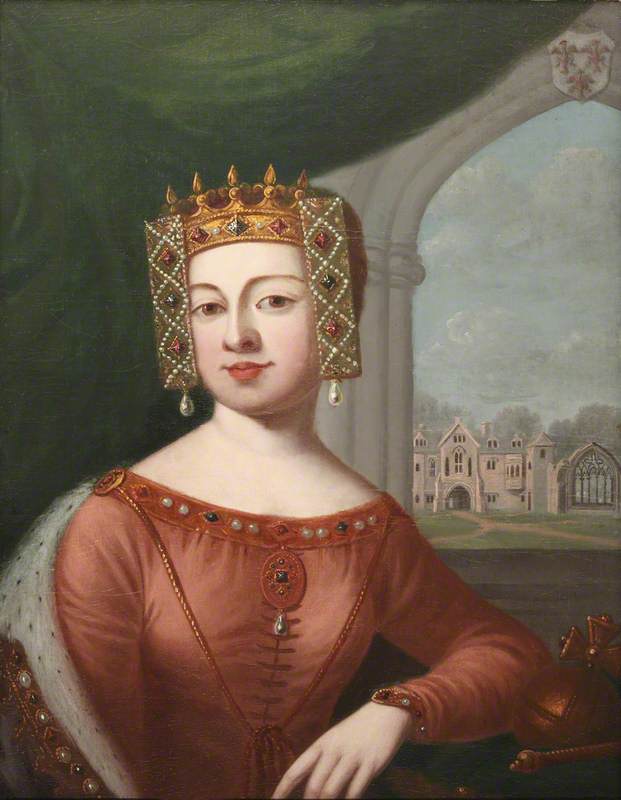 In the background is a view of the ruins of the gatehouse and chapel of the old college, seen from the west, as around 1750. It is identical with a view form an engraving made by J. Green in 1751, shortly before the buildings were demolished.